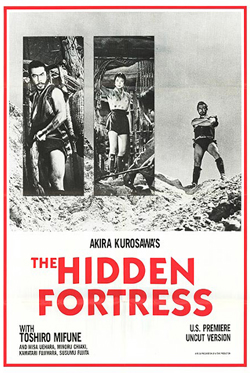 Combining brilliant action sequences (filmed for the first time in sumptuous widescreen black and white Tohoscope) with fanciful characters out of a Japanese storybook, Akira Kurosawa’s 1958 “chambara” (sword fighting) comic-adventure deserves to be remembered for much more than simply its inspiration for the plot of Star Wars. Starring the irreplaceable Toshiro Mifune as the heroic samurai and Misa Uehara as the feisty princess in disguise. Kurosawa won Best Director at that year’s Berlin Film Festival. The 137 minute original was cut to 90 minutes for its 1962 US release, since restored.