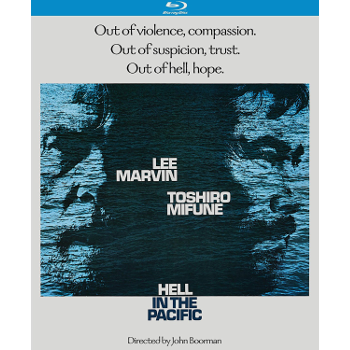 Former TV director and producer John Boorman barely survived a first feature with the Dave Clark Five, imitating Richard Lester’s success with the Beatles. The ambitious Boorman then turned his straight gangster tale Point Blank into a satisfying art picture that could have been titled ‘Last Year at Marienbad Alcatraz’ — it was violent and stylish in a year when those qualities were much in demand. Boorman followed it up with this less cerebral, more allegorical war drama. The even more allegorical Hell in the Pacific has even loftier artistic ambitions: the timeless human conflict is represented by two belligerent enemy soldiers clashing on an idyllic south seas island. It’s excellently played and beautifully filmed by Hollywood’s latest genius cameraman, Conrad Hall.

The movie plays out its minimalist tale in a gloriously idyllic setting. Survivors of a sea battle, an American Navy pilot (Lee Marvin) and a Japanese Navy Captain Kuroda (Toshiro Mifune) find themselves alone and almost weaponless, facing each other on a beautiful but harsh Pacific isle with no fresh water. As neither combatant has the desire to kill the other they quit their initial duel to the death, and after a period of hostility begin to work as a survival team. The language barrier leads to a lot of shouting and crossed signals, but eventually they begin the construction of a seaworthy bamboo raft.

Hell in the Pacific is one of John Boorman’s better films. It would seem a commercial natural considering it’s a war picture starring two of the world’s most masculine actors. Most of it plays as a silent movie. Boorman does a bang-up job of keeping us keyed in to exactly what’s going on: who’s stalking who and what the physical realities are in any particular situation. The lean, focused action is filmed with a flexible camera, making excellent use of the zoom lens to frame shots tightly. A pan-scan transfer of this show would be a disaster.

What we see is belligerence at its most basic, as simple as the Norman McLaren Film Board of Canada animated allegory about Neighbors that battle across their garden fences. Marvin and Mifune behave like cavemen, or children. They use dirty tricks, infuriating humiliations and deadly threats to bolster what are really defensive postures. Marvin struggles to get access to Mifune’s fresh water collector, and they fight like dogs over a bone. Marvin raids Mifune’s painstakingly hand-woven fish trap, and then smashes it out of pure meanness. At various times each captures the other, but refuses to deliver a coup de grace; each takes turns enforcing elaborate “I won, now you’re my slave” punishments. Even that grows unbearable. Mifune can’t stand Marvin’s silent, mocking stares. Marvin goes nuts trying to get Mifune to fetch a stick as if he were a dog.

Boorman handles the transition from violence to cooperation quite well. He never slips into the attitude of ’60s liberal sermonizing, that says all would be swell if we just got along. When the combatants do begin to work together, the lesson teaches itself. Their one modern knife becomes a shared tool, with Mifune sharpening it for Marvin. But their continued selfishness seems ridiculous, when Marvin stakes his claim on a worthless log, just to assert his dominance. Rather than strike macho poses Marvin expertly conveys his thirst, hunger and general feeling of insecurity. He nervously flexes his hands, as if reaching for non-existent tools. He also sings like a fool to amuse himself, and to annoy Mifune. For his part Mifune shows the strain of trying to remain forever on guard. He doesn’t mind making his character look rigid and somewhat foolish.

The film at all times presents a first person, you-are-there realism. There’s no preamble explaining how they got there; we start with Marvin already on the island, and Mifune realizing he’s arrived when he finds a deflated life raft. The camera shows details usually skipped in other movies, such as the combatants/comrades’ effort to break through the reef surf in a handmade bamboo boat. It really is the two actors out there, and we get to reflect on how tough the filming must have been. It all plays out in staggeringly beautiful island locations that evoke notions of a Garden of Eden spoiled by dudes with bad ‘tudes. The two stars are convincingly weather-beaten and sunburned. Mifune manages to keep his tattered uniform in fairly good shape. When covered in mud Marvin looks like a wooden figurehead on an old ship.

Conrad Hall attracted attention five years earlier with his stylish, misty images for the remarkable TV show The Outer Limits. He subsequently proved himself as adept with color as with B&W. Hall’s camera operator here is future superstar Jordan Cronenweth, sitting in for Hall’s former associate William Fraker, who had already moved on to great films like The President’s Analyst and Rosemary’s Baby.

As Hell in the Pacific nears its ending we fear that a satisfactory finish will be impossible. Boorman and his screenwriters wrap up their tale in great style. Perhaps because of the film’s allegorical nature, action fans have never complained about the lack of a duel to the death, now a commercial necessity even in kids’ films and comic book stories. By the third reel Marvin and Mifune are just too darn likable for anyone to want to see either of them killed. Boorman finishes off his little art picture with a simple elliptical structure — when the pair get back to surroundings reminding them of their previous identities as sworn enemies, their natural truce fades. They shave, get cleaned up and drink saké together, but it’s no use.

The KL Studio Classics Blu-ray of Cinerama Releasing Corporation’s Hell in the Pacific is an improved transfer that makes a flat letterboxed 2004 disc look feeble. Colors are great. We appreciate Conrad Hall’s striking yet unfussy camera angles. (do not judge the color by the ragged images nabbed for this review.) There are signs that the elements accessed have issues here and there. On my LG monitor some blacks tend to have a texture of fine video noise now and then. A few individual shots drop in quality, as if damage forced a substitution of film element. The mono sound is excellent. After the environmental sounds of the island are established, Boorman makes good use of audio to cue unseen action — Mifune is especially aware of Marvin, off somewhere making a racket on purpose, or sneaking around in close quarters.

Boorman’s cut ends Hell in the Pacific with a low-key, enigmatic finish that returns the show to it’s art-film roots. But it was only seen that way in France. For other markets including America, producer Henry G. Saperstein (sample product, Frankenstein Conquers the World) confected a more conventionally cynical ending, without Boorman’s knowledge. Rather than present one of the endings as an extra, Kino allows the viewer to see the whole movie either way.

Travis Crawford and Bill Ackerman provide a full audio commentary, dishing up facts and lore surrounding this picture. But Kino also has a great interview with director Boorman, whose candid memories and anecdotes from the far-off location (the Palau Islands in Micronesia) are pretty wondrous . . . the movie was made under the same conditions faced by the marooned sailors in the story. Boorman speaks for half an hour yet is never once boring. We’re surprised to find that he encountered nothing but trouble from actor Toshiro Mifune, who early on decided ‘to direct himself’ and resisted Boorman’s instructions. It was a matter of character interpretation — Mifune wanted to play his shipwrecked sailor in a slightly comic mode, like his classic Kikuchiyo in Seven Samurai. Say what you will, that sounds like a game plan to take the spotlight away from Lee Marvin.

John Boorman had no use for Mifune’s clowning, and wanted the combatants to have equal stature. He struggled with the interpreters against Mifune’s intransigence, and the shooting schedule stretched out as he slowly got what he wanted. Imagine that, there was a time when directors could stand up to a big star. On the other hand, Lee Marvin was the most supportive actor Boorman ever worked with. The producers gave Marvin veto power over the director going in, with the idea of using the actor to control the director. Marvin instead called a formal meeting to say, “I defer my authority on these matters to John Boorman,” giving his director the power to shoot the picture he wanted.

It’s fun to look at Mifune’s performance to see if any comic clowning slips through. I don’t find that I like all of John Boorman’s pictures, but he rarely falls back on sure-fire formulas. On those occasions where the pictures are weak, they’re still admirable from the POV of directorial daring.

Also talking about the once-in-a-lifetime filming adventure is art director Anthony Pratt. Kino ends the satisfying disc presentation with several trailers, some of them from films starring Lee Marvin. The show has English subtitles. There is so little dialogue, they are almost unnecessary.