This may be the year for new cinephile converts to the cult of appreciation for the great Ernst Lubitsch. One of his last pictures but his first in color is this Production Code-defying tale of a serial philanderer and his relationship with the woman of his dreams, his wife. It’s stylized as a series of birthdays, and our hero is judged not by St. Peter but at the gates of Hades, by the fallen angel himself. 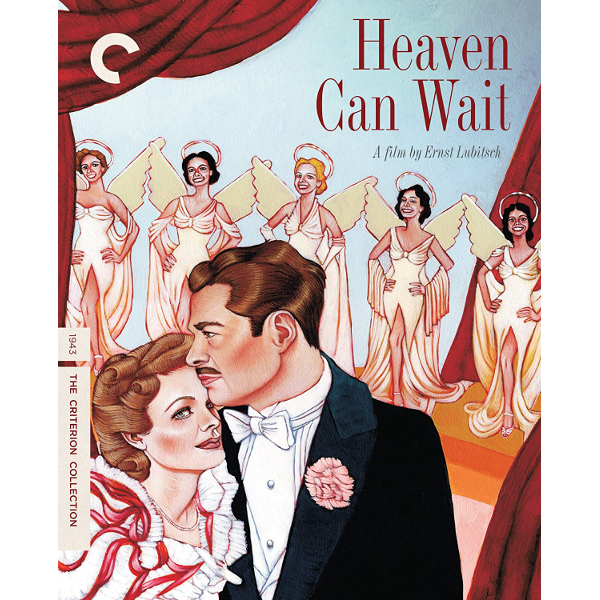 Wait one second, this isn’t the Heaven Can Wait from 1978, with Warren Beatty — that movie is actually a remake of Alexander Hall’s 1941 film blanc Here Comes Mr. Jordan.  This is Ernst Lubitsch’s wartime hit Heaven Can Wait, a classic that will amuse casual viewers while captivating fans of the director’s inimitable style. Lubitsch’s importance can be judged by the worship of his disciple Billy Wilder, no slouch himself when it comes to clever screen comedy. 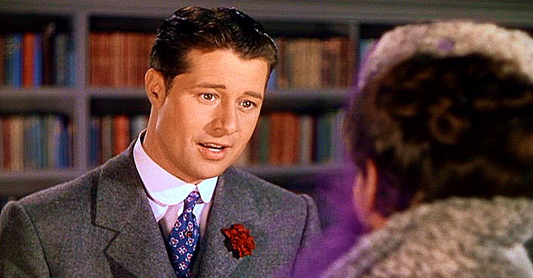 Heaven Can Wait flirts with bad taste (1943 bad taste) to tell the story of a philandering husband convinced he’s prime material for Satan’s infernal domain. Lubitsch had been making light of illicit affairs and other human foibles since the silent days, and still seems to be constructing a case for looking the other way when swain Don Ameche enters the scene. We hardly ever see him do anything deserving of a slap on the wrist, let alone a trip to Hell . . . yet the attitudes put forward in Samson Raphaelson’s script are unlikely to be lauded by feminists.

The film floats on charm, cute characters, and witty dialog that supports its main thesis — ‘love and an impish smile conquer all.’ Top- billed Gene Tierney is adorable but the real star is the under-appreciated Don Ameche. The capable actor unfortunately fell out of style about the same time that Humphrey Bogart ascended to the Pantheon. Instead of a versatile leading man, Ameche for a few years became synonymous with epitome of cornball casting, just for playing the guy who invented the telephone. After years spent mostly in television, in the 1980s director John Landis brought him back for major supporting roles.

Before the story turns to time-hopping, it begins in a post-life limbo. Playboy Henry Van Cleave (Don Ameche) voluntarily shows up at the devil’s doorstep, to ask Satan (Laird Cregar) to let him into his fiery domain without further fuss; he knows only too well that he’s been a faithless lout all of his life. Together they re-run Henry’s story from his childhood in the 1880s, past his elopement with Martha, the fiancée of his own cousin (Gene Tierney), and onward through decades of marriage. Henry’s charm has always earned him the indulgence of his parents, the encouragement of his grandfather (Charles Coburn), and the attentions of many women, and Henry is convinced that trying his luck at the pearly gates would be pointless.

This fanciful story was something of a departure for Lubitsch, who had his big bedroom farce hits but didn’t repeat himself that often. Heaven Can Wait is a core film blanc, one of those fanciful movies that postulates a Heavenly afterlife, usually as some sort of waiting room in the clouds where souls in transit face up to their sins. The problem most often is that some undone business or unpaid debt back on Earth needs to be straightened out, and the rules of Heaven and Earth have to be tweaked a little to ensure a happy ending. 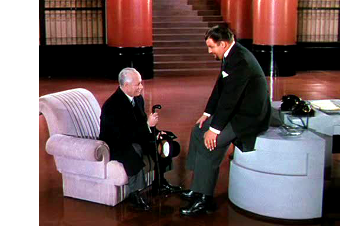 Heaven Can Wait honors the form and spoofs it as well, with the urbane Henry Van Cleave showing up at Satan’s reception room to pay the piper. Ol’ Beezelbub is there in person. Satan loses his patience with an annoying older woman, and drops her through a fiery trap door. But he’s sufficiently intrigued by Henry’s lack of panic to ask to hear his story.

What we get in flashback form is Henry’s life, reduced to a series of eventful birthdays. He learns about ‘fun’ from a French maid (Signe Hasso) and finds out that little girls like gifts in exchange for their company. Interestingly, although the story alludes to a constant stream of girlfriends, lovers and affairs we see none of them, just their effects. Henry’s doting and slightly dense parents are easy touches for money; the idea of this man working for a living is never given a thought.

The story covers a time from roughly 1870 to 1940, yet ignores the usual historical signposts. There are no headlines of wars starting or stock markets crashing. Henry appears to live outside of all of those petty concerns, in a world of his own interests. Hmmm … womanizer, non-working lounge lizard … it’s interesting that Henry could be considered a positive character in a movie made during WW2. His type were usually played by Clifton Webb or Tom Conway, more often than not as bad guys. 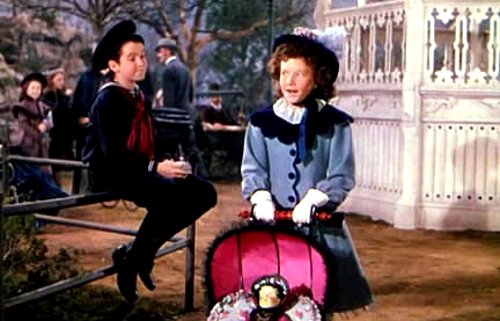 The secret is charm, a Lubitsch specialty. Henry’s parents cave in and give him money whenever he smiles. A few choice words in a bookstore (“You don’t need a book called ‘How to Make Your Husband Happy!'”) and Henry wins the woman of his life, who turns out to be the new fiancé of his snooty cousin. Henry literally sweeps his conquest off her feet in front of their assembled families, and gets away with it. After all, she only said yes to his cousin to get away from her obnoxious parents (Marjorie Main and Eugene Pallette).

Heaven Can Wait doesn’t bother to make excuses for Henry’s philandering and instead prefers to lobby for his cause around the edges. Charles Coburn’s delightful grandfather lives vicariously through Henry’s naughty adventures, inviting us to share his enthusiasm. Marriage as defined by society is given a terrible beating. Henry’s parents are a pair of sexless sweethearts living in a bubble. Wife Martha’s parents are lampooned in what would appear to be a takeoff of the Citizen Kane domestic scene where Kane and his wife are at opposite ends of a long table. Their marriage has deteriorated to the point where their servant has to carry messages from one end of the table to the other.

We’re also invited to feel sorry for Henry when his rooster feathers have gone gray and the showgirls no longer see him as an attractive catch. Never mind that he still defines himself in terms of how many female heads he can turn: we are assured he still loves Martha as deeply as ever. The movie stays within the confines of the Breen Code yet snubs its nose at most every tenet involving respect in marriage. That’s pretty good shootin’ for Ernst and his ace screenwriter Samson Raphaelson.

Don Ameche is nothing short of wonderful, and it’s a shame that postwar fashion would push him aside in favor of a diet of he-man types and younger blood. That makes his late-career return almost forty years later all the more pleasing. Gene Tierney is appropriately ravishing and handles her comedy well. Her incredible looks got her through a many ordinary pix until a couple of positive hits like this one led to Laura and mainstream stardom. Lubitsch gets a full, polished performer from Tierney. Charles Coburn is a hit as the randy granddad and Spring Byington intensely lovable as Henry’s indulgent mom. Allyn Joslyn makes a perfect dullsville cousin, the kind who can be cruelly cheated and we don’t care a bit. He has a nice scene where he re-proposes to Martha by describing himself as an old suit of clothes. Martha smiles, but cousin hasn’t a prayer. 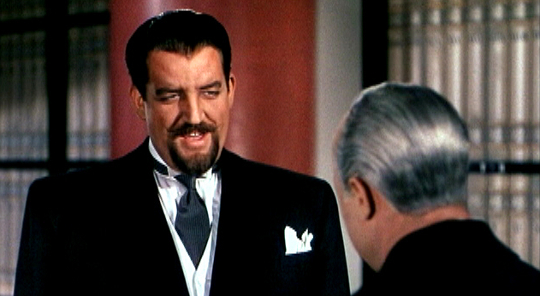 (spoiler) Henry, on the other hand, seems to have snookered Satan fairly well, although he seems sincere. Satan overlooks all those implied marital indiscretions and puts Henry on the fast elevator to the stars. The final bit of class in Heaven Can Wait is that it doesn’t even need the kind of romantic reunion scene that gushes forth in most movies of this subgenre — there’s no direct image of a movie star waiting for Henry at the pearly gates. All the better, as we finish the film with a happy sense of anticipation.

Dickie Moore plays Henry as a troublemaking teenager. The Tod Andrews that plays Henry’s grown son appears to indeed be the same Tod Andrews that later battled a walking tree in the movie From Hell It Came. That title would read well on a double bill marquee below Heaven Can Wait, we have to admit.

Joseph McBride’s new book about Ernst Lubitsch How Did Lubitsch Do It? must spend forty pages on this one movie, trying to untangle the way the master comedy filmmaker makes philandering, adultery and caddish behavior somehow palatable with the Breen Office. McBride tells us that Lubitsch played Satan twice in silent movies; maybe this Devil takes a liking to Henry Van Cleave because they have so much in common — we’re surprised that the Devil doesn’t keep Henry in his waiting room just so the he can have some pleasant company. McBride also describes a scene that was planned and not filmed, of the widower Henry marrying a gold digger, who moves in with her whole family. Lubitsch replaced it with a simpler scene in which the elderly Henry tries to get his son to hire an attractive young woman to ‘read to him.’ 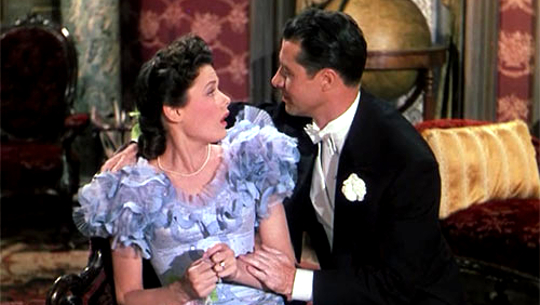 The Criterion Collection’s Blu-ray of Heaven Can Wait is a dazzler in a new 4K restoration by Twentieth- Fox and the Academy Film Archive. The Film Foundation contributed to the project as well. This show always looked good in color, probably because of a well-made Eastman composite from the original Technicolor elements. We can immediately tell that it’s a Fox film, with all those blue tones in the art direction. In Fox’s color pictures of the 1940s the heavy makeup base was so uniform that the actors don’t seem to have skin texture at all — it’s a particular artificial look.

Criterion has repeated the same extras from its 2010 DVD release. The extras are well chosen, considering that the picture’s creative talent have long since passed away. Critics Molly Haskell and Andrew Sarris carry a spirited discussion of the film, Critic’s Corner-style. Screenwriter Samson Raphaelson is given his due in a Bill Moyers PBS Creativity with … episode, where we see the crusty old playwright advising theater students. Another Raphaelson extra is an audio recording of a seminar hosted by Richard Corliss in 1977. Lubitsch’s daughter hosts a photo montage over audio of the director playing the piano. And there’s an original trailer stressing the film’s few bits of overt slapstick, along with an insert essay by William Paul.