No, it’s not a the-day-after sequel to The Lost Weekend, but a class-act mystery-horror from 20th-Fox, at a time when the studio wasn’t keen on scare shows. John Brahm directs the ill-fated Laird Cregar as a mad musician . . . or, at least a musician driven mad by a perfidious femme fatale, Darryl Zanuck’s top glamour girl Linda Darnell. 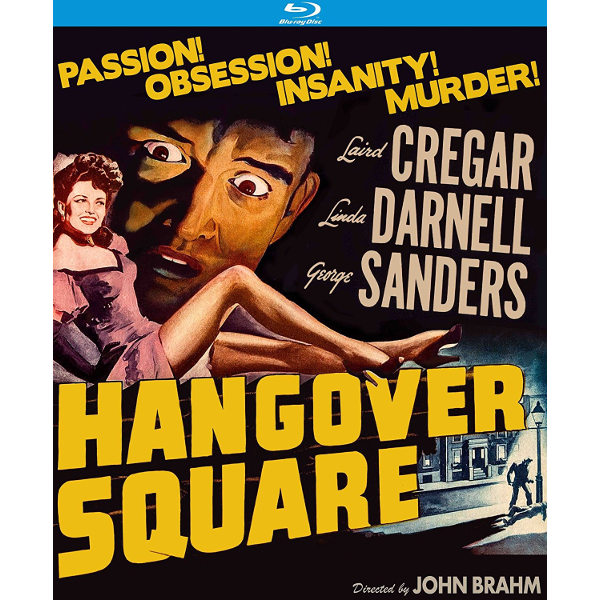 Here’s a serious quality upgrade for horror fans. Although technically a period murder thriller, as a horror film John Brahm’s tense Hangover Square betters its precursor The Lodger in almost every department. We don’t think of 20th Century Fox is being much of a home for horror, having more or less ignored the genre in the 1930s. Director Brahm took on three menacing thrillers during the war years. The first is the straightforward supernatural tale The Undying Monster, which today seems a little murky in the story department. It remains a visual treat, with a massive interior-exterior set of a crag-cliffside outside the obligatory haunted mansion.

The follow-up The Lodger did well because its title was connected to the famous English silent thriller by Alfred Hitchcock. It was also a triumph for its star Laird Cregar, a large man who did well in mostly villainous roles — Blood and Sand, This Gun For Hire, Heaven Can Wait — and seriously groomed himself for leading man status. Cregar is the star of Hangover Square as well, creating a more interesting leaning character — who is still a homicidal maniac.

The two films starring the classy Laird Cregar show Fox doing their best to trump the upsurge in psychological horror introduced by Val Lewton’s Cat People at the start of the war, adding slick ‘quality values’ associated with upscale titles like MGM’s Gaslight, made the same year. These stylishly produced thrillers afforded director John Brahm the opportunity to let loose with a barrage of expressionist lighting effects to emphasize the menace of the troubled star Laird Cregar. Cregar isn’t Hollywood’s first modern psycho madman, the kind of involuntary menace who knows he’s a murdering fiend but cannot stop himself. Val Lewton may have initiated this more realistic attitude toward mad villainy in pictures like The Leopard Man and The Ghost Ship, but actors James Bell and Richard Dix never approach Laird Cregar’s intensity, or match his handling of twisted dialogue. Cregar reaches for a kind of murderous pathos, and achieves it. A sympathetic madman is not far removed from a movie monster – we like them, but we also understand why they don’t survive the last reel.

1945’s Hangover Square is John Brahm’s near-masterpiece, a popular chiller that nevertheless did not attract the attention of more audience-friendly pictures like Robert Siodmak’s The Spiral Staircase. This time aided by cameraman Joseph LaShelle, director Brahm runs wild with expressionistic visual effects, as when a madman is cued to kill by the loud noise of some piping tumbling off a wagon. The story apparently started out in a different direction but was steered by Darryl Zanuck into a ‘the same, but better’ rehash of the basic The Lodger setup. Laird Cregar ‘s tortured is killer horrified by his own murderous acts, committed while in an amnesiac trance. Hangover Square pleases more than does The Lodger because its script allows for more interesting characters and surprisingly original set pieces. The expensive-looking production is graced with a large London set in which civic infrastructure improvements are being made. All the streets are torn up with ditches and little wooden bridges on which to cross; Bone often interacts with a little watchman keeping an eye on the construction materials. Little flame pots illuminate the open trenches. It all seems very realistic, and of course the excavations are exploited for the murders.

The main set piece is a bit of horror film brilliance: Bone disposes of one of his victims on a tall bonfire erected to celebrate Guy Fawkes Day, while hundreds of revelers watch. They assume that he’s placing another effigy of Fawkes on the fire. The victim is already dead, yet the act has a truly diabolical feel, transforming Harvey Bone into a classic-rank fiend. The public nature of the crime makes everyone seem complicit.

This time Laird Cregar’s performance is more measured — he plays the ill-fated composer Harvey Bone not as a monster, but as a thwarted romantic, cruelly cheated by a cheap femme fatale. Unaccustomed to the idea of a beautiful woman flat-out lying and scheming, he’s as easily fooled as was Edward G. Robinson in Scarlet Street. As in Fox’s Fallen Angel, Linda Darnell exits the film early, taking some of the magic with her. But Bone’s psychic meltdown in the midst of a concert elevates the conclusion to the dramatic level of a more psychologically realistic The Phantom of the Opera. A terrific Bernard Herrmann score serves to express Bone’s inner mania. Herrmann’s music animates Bone’s trance-like attacks and highlights the aural shocks that touch off his seizures. The film’s final reel is devoted to Bone’s performance of a ‘concerto macabre’, a piece that expresses the killer’s own madness and causes him to become aware of his crimes. Just as with The Phantom’s haunted Erique Claudin, Harvey Bone freaks out when he realizes his music is being stolen. Anybody can identify with that outrage.

Still, our anti-hero bone is something of a dope, easily fooled by the scheming Netta Longden. It’s rather unpleasant that Netta is primarily preying on Bone’s talent, tricking him into pouring his musical genius into her cheap cabaret songs. But from the evidence we hear, Netta is a real talent as well — she writes catchy lyrics for Bone’s tunes. This of course suggests a fun spoof idea — It would be great to have Bone & Netta appear in a parody of MGM musical biographies. They could compose joyful hits on the road to greatness … while murdering people: Words and Music and Blood? Memories of Melody Morgue?

John Brahm uses dynamic editing and dream-like flashbacks to express Bone’s chaotic mental state. Right in the middle of his concert, the falling pipes demonstrate the trigger effect that set him off on his murder frenzies. The hallucinations also reveal to Bone his own guilt, replaying images of him trying to kill Barbara, a crime that had happened off-camera. Hangover Square pushes the right buttons to animate its gothic thrills. Although not all that well remembered, it’s a superior psychological thriller set in an interesting time period. The KL Studio Classics Blu-ray of Hangover Square makes a picture that already looked good on DVD look even better. The silky Joe LaShelle cinematography shows no seams; the romantic period setting becomes slightly expressionist when those montage scenes kick in. The crane shot for the Guy Fawkes pyre is impressive as well, with the added resolution; the film has a large-scale feel. Likewise the Bernard Herrmann music is given a fine showcase. Herrmann manages little touches that help attune the film to its intended period, without pushing it too hard.

A featurette extra gives us the lowdown on Laird Cregar’s short and mostly unhappy Hollywood career. We hear from capable interviewees like Kim Newman and Steve Haberman. By including every statement that praises the films and the actors, the editorial choices oversell the films — these are good movies, but not monumental landmarks in horror history. Some statements are a real stretch, as when one interviewee heralds John Brahm’s use of lanterns at the London construction site as a wondrous accomplishment of the art of cinema. Many other bits of information are fascinating.

The films is given two commentary tracks, an okay but slow effort by Richard Schickel and a better one with Steve Haberman hosting actress Faye Marlow. She hasn’t much to add to the mystery of Laird Cregar or the controversial behavior of George Sanders, yet remembers that the neckline of one of her dresses had to be raised. All of the contributors handle Laird Cregar’s story with discretion and sympathy. We learn that the big, broad actor lost over 100 pounds in a vain attempt to become a leading man, damaging his health and leading directly to an unnecessary hospital death at the young age of 31. At 200+ pounds in Hangover Square Cregar looks very good, sort of like James Arness’ heavier brother. The contributors point to the fact that Vincent Price stepped in to fill Cregar’s character roles, but we resist the notion that Price ‘inherited’ Cregar’s career. Price had a unique range and this reviewer can’t imagine Cregar taking his place as the urbane menace of later films like House of Wax..

Cregar desired to magically transform himself into Clark Gable or Tyrone Power. Had he settled for being a celebrated and respected character actor, I’d think he could have had the kind of career enjoyed by Raymond Burr. Burr started as a hulking heavy in far less promising roles, struggled through early 1950s cheapies and eventually became a major star on television.

The disc set makes the counter-case that somebody thought Vincent Price and Laird Cregar were interchangeable by including the radio show adapted from Hangover Square. Price takes the Cregar role.