Once an upstart and now a company to contend with, Britain’s Indicator continues their series of Hammer Studio releases with Hammer Volume Six: Night Shadows, a purely generic subtitle fit for any horror film, Hammer or otherwise. What isn’t generic is Indicator’s winning formula—top notch image quality and boatloads of extra materials including documentaries, commentaries, image galleries—the works. The films in their latest set are already available stateside in more than adequate Blu ray versions—but Indicator’s work prevails on the sheer magnitude and quality of their content. 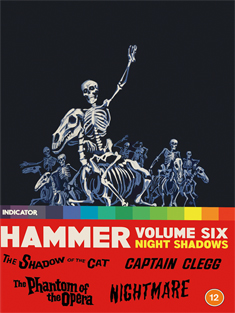 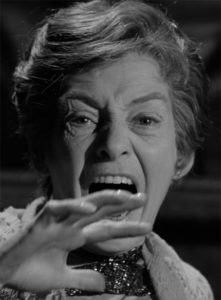 Cat lovers of all stripes should have a grand time with John Gilling’s uproarious The Shadow of the Cat, the story of one formidable feline vs. three of the most hapless cutthroats in movie history. Catherine Lacey plays Ella Venable, the victim of a murder plot hatched by her husband, André Morell, and her very unfaithful servants, Freda Jackson and Andrew Crawford. One by one they shuffle, stumble, and tumble off this mortal coil thanks to the sly ways of Tabitha, Mrs. Venable’s poker-faced pussycat.

Like his frisky leading lady, Gilling is equally playful—occasionally, we see the terrified reactions of our antagonists through Tabitha’s wide eyes, a point of view photographed by Arthur Grant with a distorted lens that, if William Castle were running the show, would be part of the marquee: “Coming at you in Cat Vision!” While the villains are turned to jelly at the sight of tabby whose mere presence induces room-wrecking panic attacks, Barbara Shelley keeps her composure as the beautiful if somewhat confused Venable niece. But the real star of the show remains the imperturbable Tabitha who views the high-strung humans as naught but flesh-covered scratching posts.

Indicator’s transfer of the 1962 thriller matches up to Shout! Factory’s beautiful 2020 release, Universal Horrors Volume Six—but the wealth of Indicator’s extra material, including a  long interview with the late Ms. Shelley, makes it the clear favorite. 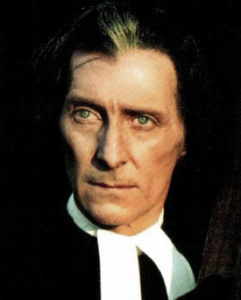 In a role tailor made to his alternately kindly/beastly movie personas, Peter Cushing plays a good man with a bad past in Night Creatures, or as it’s known in Britain and around the Indicator offices, Captain Clegg. Cushing is Parson Blyss, the vicar of Dymchurch during the day and the terror of Romney Marsh at night. In the early sixties there was a burst of interest in the the Zorro-like vicar—a mild-mannered fellow who championed the proletariat in the guise of a ghostly smuggler. Not surprisingly Hammer took the bloodstained route while Disney’s Wonderful World of Color took the high road with The Scarecrow of Romney Marsh starring Patrick McGoohan as the renegade churchman—though McGoohan’s scarecrow make-up made up in Sunday nightmares what the film itself lacked in blood.

Directed by Peter Graham Scott, Clegg was part of the problematic Universal release from 2016 in a compromised transfer with a wonky aspect ratio but Indicator’s disc is the way to go, correcting the AR with a stellar image and plenty of extras. 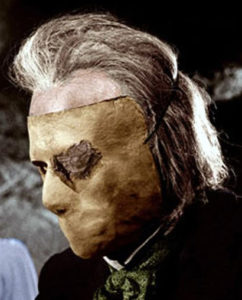 Terence Fisher’s embattled remake of the Leroux melodrama began in dreams of big budget glory and ended as just another Hammer assembly line job. That might have been for the best—the movie’s modesty works in its favor, reflecting the sad sack status of the Phantom himself, yet another artist who just couldn’t catch a break. Herbert Lom gives a heartfelt, close to the vest performance and the second-stringers who shore up the cast, including Edward De Souza and Heather Sears, are quite likable in their unpretentious manner. There’s plenty of action on the sidelines including a murderous dwarf and his victim, a rat catcher who gets too close to the truth. The one rat who doesn’t get caught is Lord Ambrose D’Arcy, the pivotal character who brings the Phantom into being—as played by Michael Gough, D’Arcy does everything but lick his lips as the thieving music publisher who sets the plot in motion.

Indicator presents the same fine transfers from the Shout! Factory 2020 that included both 1:66: 1 and 1:85:1 versions plus the ragged but rare television cut. That said, Indictor pulls ahead with even more specially produced items. 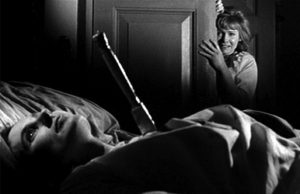 Freddie Francis directs a film that looks like Freddie Francis photographed it and that can only be a good thing—he even gets to hobnob with one of his most memorable camera subjects, Clytie Jessop, the pitiful and terrifying ghost of Miss Jessel in The Innocents, directed by Jack Clayton and shot by Francis. The story of a boarding school student plagued by the memories of her father’s gruesome death at the hand of her mother, Francis’s film is awash in atmosphere and not much else—not necessarily a bad thing for a horror movie. A convoluted, yet completely transparent plot hobbles the film but the sight of Ms. Jessop haunting the hallways—enhanced by John Wilcox’s fine photography—more than makes up for the lack of surprises. This film was also a part of Universal’s Hammer set and once again Indicator drinks their milkshake.

THE SHADOW OF THE CAT

THE PHANTOM OF THE OPERA