Starting out in 1939 as the little studio that could, Hammer would finally make their reputation in the late fifties reimagining Universal’s black and white horrors as eye-popping Technicolor gothics – their pictorial beauty, thanks to cameramen like Jack Asher and Arthur Ibbetson, was fundamental to the studio’s legacy. So it’s been more than a little frustrating to see such disrespect visited upon these films by home video companies happy to smother the market with grainy prints, incoherent cropping and under-saturated colors. The House of Hammer and the film community in general deserve far better than that.

Thanks to Indicator, the home video arm of Powerhouse films based in the UK, those wrongs are beginning to be righted, starting with their impressive new release of Hammer shockers, Fear Warning! Even better news for stateside fans; the set is region-free, ready to be relished the world over. 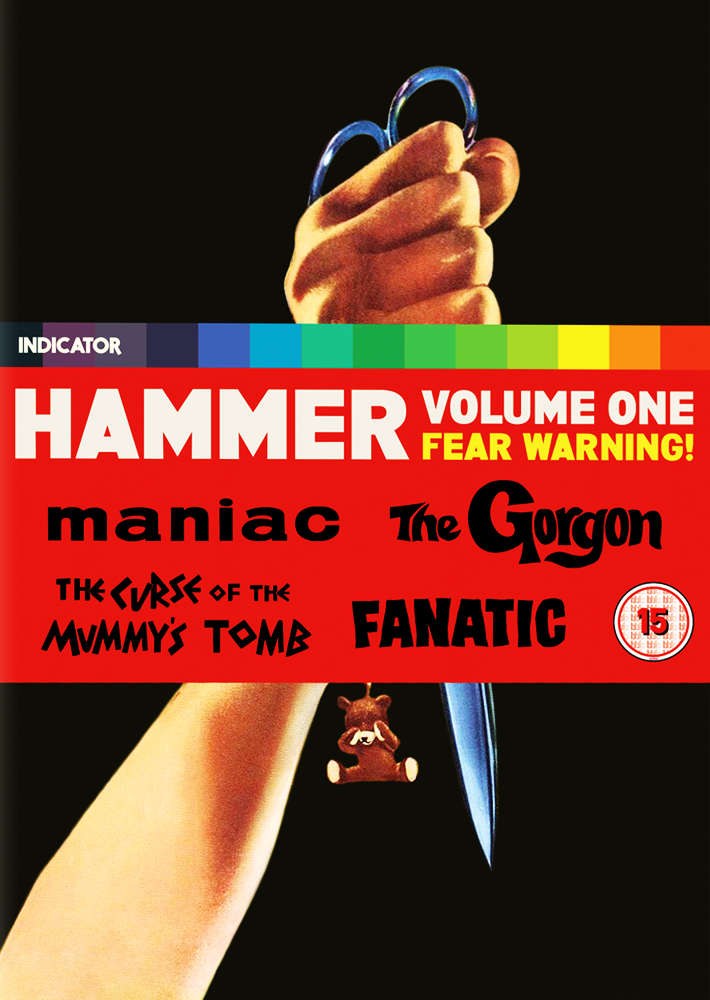 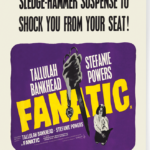 Indicator inaugurates their (hopefully continuing) series with four unsung but nevertheless significant outliers, 1963’s Maniac, 1964’s The Gorgon and The Curse of the Mummy’s Tomb plus a dirty-minded little shocker from 1965 featuring a wild-eyed crackpot on a mission from God.

Patricia Carroll, an All-American girl just arrived in London, is en route to the childhood home of her deceased fiancee looking to console his estranged mother. Far from town and barricaded by a tangled forest, the decrepit old house is anything but inviting. And when the the black-clad figure of Mrs.Trefoile appears, a spark is lit; the tension between the beautiful young woman and the gaunt old lady is immediately palpable. Whether that tension will be resolved, and if so how, is part of the kinky fun of Silvio Narizzano’s Fanatic.

Mrs. Trefoile, as the title implies, is a batty religious zealot who’s simultaneously appalled by and attracted to the doe-eyed Patricia. Rather than accept the young woman’s condolences, the embittered harridan imprisons the unsuspecting beauty in the attic while subjecting her to a series of humiliations that suggest a perverse mix of Whatever Happened to Baby Jane and Venus in Furs.

For 97 minutes, Patricia endures not just Trefoile’s attacks on her cosmopolitan femininity, the leering old crone subjects her dishy victim to not one, not two, but three hair-pulling, blouse-tearing cat-fights. The raincoat crowd must have been licking their lips.

The movie is knowingly cast with the ripely sexy Stephanie Powers as Patricia and, as the gravel-voiced Mrs. Trefoile, Tallulah Bankhead, whose devil-may-care persona was defined by one memorable quote, “My father warned me about men and booze, but he never mentioned a word about women and cocaine.” The familiar cast is fleshed out by a young Donald Sutherland as an imbecilic handyman and no-nonsense Yootha Joyce as Powers’ wrestling partner in the frenzied girl on girl take-downs.

The Canadian Narizzano, a globe-trotting gadfly who flirted with the New Wave in 1966’s Georgy Girl, is an odd choice to helm this peculiar mix of pulp fiction and sapphic intrigue and his stilted pacing does little to serve Richard Matheson’s blackly comic screenplay. Further damage is done by the egregious score from Wilfred Josephs whose wah-wah trombones Mickey Mouse every off-color moment. On the other hand cinematographer Arthur Ibbetson, justly famous for his painterly approach to films like The Horse’s Mouth, has the wit to treat Trefoile’s secret chamber with garish greens and purples giving it the sinful ambience of a low-rent bordello. The god-bothered battle-ax would surely not approve. 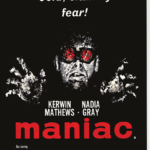 In Michael Carreras’s Maniac, a drifter falls into a steamy triangle vacillating between a curvy French teen and her zaftig mom. The mom wins out and the love-sick romeo, played by Kerwin Matthews, is sucked into a plot involving a jealous psychopath armed with an Acetylene torch and an unforgiving manner. The story resembles a Jim Thompson pulp thriller but where Thompson’s scenarios were brutally focused, screenwriter Jimmy Sangster’s storyline sags and wheezes.

The film benefits from Wilkie Cooper’s widescreen lensing of exteriors shot at Les Baux-de-Provence but Sangster’s shapeless script, full of longueurs and dull detours among the admittedly breathtaking foothills of Alpilles, rambles on till the crazy quilt climax in which one revelation piles on top of the other in head-spinning and near risible fashion.

The cast includes perennial sex kitten Nadia Gray (mostly famous for performing a “scandalous” striptease in Fellini’s 8 1/2) and Matthews, late of Jack the Giant Killer and 7th Voyage of Sinbad. Whether encountering an alluring glamour girl or a horned Cyclops, the blank-faced Matthews’ expression is unchanging, reacting to the voluptuous Gray as if she were to be added in postproduction. 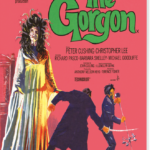 In Terence Fisher’s The Gorgon, the presence of a legendary monster haunts a tiny German hamlet plagued by a string of literally monumental deaths; the victims have been turned into stone statues, “gorgonized”. The panicked populace blames the snake-haired spirit supposedly haunting a nearby castle but Dr. Namaroff, a medico at the local hospital, is intent on a scientific cure.

The cold and calculating Namaroff is played by Peter Cushing and his reluctant ally, the affable Professor Meister is portrayed by Christopher Lee. The two actors have clearly switched personas but Karla, the ethereal beauty at the heart of the mystery, is played by Barbara Shelley and her eternally mysterious facade remains as immovable as one of the Gorgon’s victims.

Though the low budget and a wobbly screenplay by John Gilling works against Fisher he still finds ways to express himself; his inspired visuals bolster the film where the script cannot; a passing shadow that foretells the identity of the monster is the director at his best (he gets an able assist from composer James Bernard whose creepy choral theme raises hackles).

You can read Glenn Erickson’s review of the first Blu-ray release of The Gorgon here. 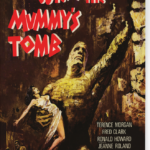 The Curse of the Mummy’s Tomb came five years after Hammer’s maiden voyage through ancient Egypt, 1959’s The Mummy, a gorgeously macabre fantasy featuring Christopher Lee in an adrenalized performance as Kharis, the mummified, and highly energetic, high priest of Karnak.

Director Michael Carreras wrote Curse’s script under the pen name of Henry Younger and he had good reason to remain anonymous, the story is a rote affair with the usual characters carrying out their marching orders; the comically obtuse archaeologists, the sinister Egyptian accomplice and the mummy itself, once again an unstoppable killing machine. The only bright note is the unexpected presence of Fred Clark (of all people) with his carnival barker persona lending much-needed fun to the proceedings.

One of Hammer’s few ventures into widescreen films (including Dracula, Prince of Darkness and Rasputin the Mad Monk), it boasts fine work from peerless cinematographer Otto Heller who gave life to such disparate movies as The Crimson Pirate, Peeping Tom and Alfie.

You can read Glenn Erickson’s review of the first Blu-ray release of The Curse of the Mummy’s Tomb here.

Indicator has given each of these films superb transfers, easily besting any former appearances on dvd or Blu-ray. The Gorgon’s presentation is especially satisfying with its rich colors, sharp picture and inky shadows. Fingers crossed the company gets their mitts on other Hammer product.

Each film comes with an excellent selection of supplements and they all follow a fairly strict template, an (approximately) 14 minute making-of documentary, special features on the leading actresses when appropriate, comments from cast and crew members and promotional materials. As follows:

Other notable extras include these promotional materials:

A comic strip adaption of The Gorgon scripted by Scott Goodall, Trevor Goring and illustrated by Alberto Cuyas that first appeared in 1977’s House of Hammer magazine. Well worth a look for the spirited approach of the creators, in this action-packed version of Fisher’s film the snake-topped fiend is near-acrobatic in her aggressive attempts to dismantle her prey, it’s a hugely enjoyable variation on Fisher’s leisurely mise-en-scene. 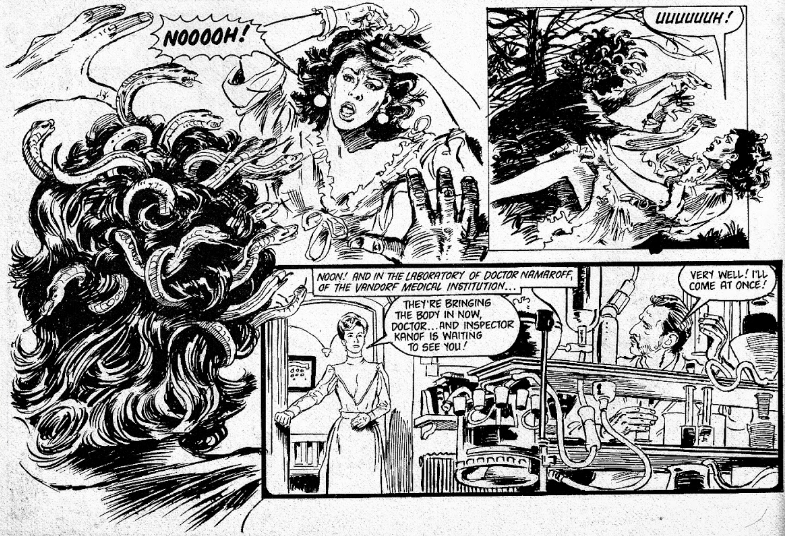 A Super 8 version of The Curse of the Mummy’s Tomb in grainy 1:33 and black and white.

The Americanized title sequence for Fanatic: Die! Die! My Darling!

Also included are the original trailers, a treasure trove of promotional and on-set photography, original lobby cards and poster art