Adolfas Mekas made his mark in American independent filmmaking with this avant-garde comedy that shook up film festivals circa 1963. Although it is said to have inspired Andy Warhol, it’s its own animal entirely, eighty minutes of cinematic frivolity that’s too sincere to be a parody of the filmic conventions it so happily celebrates. 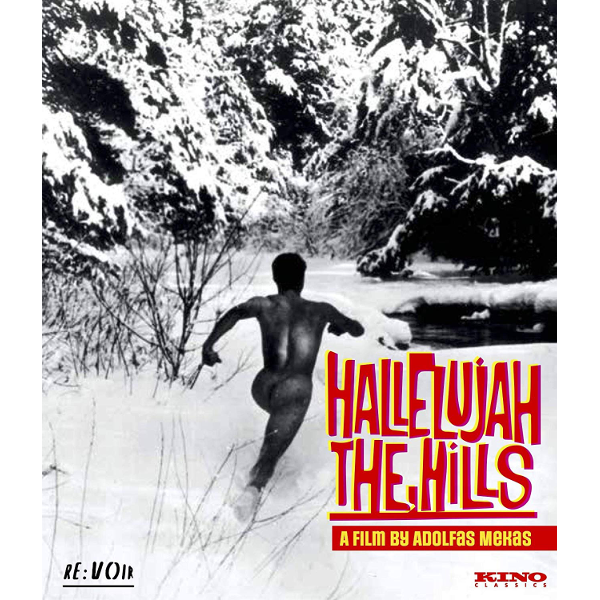 Describing Adolfas Mekas’ Hallelujah the Hills is a real chore. It is avant-garde in a way that no longer seems all that ‘avant,’ yet in 1963 its impact was felt strongly in independent filmmaking everywhere. Basically a festival & college-town art picture, it has a comic energy that’s primitive and sophisticated at the same time. It’s easier to say what it isn’t rather than what it is. It’s a comedy, but almost entirely without form. Its oddball cast engages in skit-like comic scenes, but what we see is more like the kind of monkeying-about that happens in home movies. Yet every scene feels inspired by a pure love of moviemaking.

European immigrants Jonas and Adolfas Mekas were a major influence on New York film in the 1950s. They organized screenings of notorious underground movies and founded the magazine Film Culture; they worked in film societies and made movies of their own. Jonas was much more prolific but Adolfas’ first picture Hallelujah the Hills was the one that came to be best known. Some of the experimental films from New York around this time could almost be called Movie Doodling. I’m thinking of Marie Menken, some of whose films are little more than blurry home movies of flowers. Despite capturing the freedom of a playful home movie Hallelujah is professionally made, with excellent synch sound. The movie purports to be a comic look at the romantic travails of two men smitten with the same woman. Best friends Jack (Peter Beard) and Leo (Martin Greenbaum) are both in love with Vera, forming a triangle as in Truffaut’s Jules & Jim. After seven years wooing her individually, they show up at the same time to propose, and are given bad news: Vera has gone and married a third suitor, the goofy lecher Gideon (cameraman Ed Emshwiller). Our two boys then go off on a camping trip to heal their wounds together, which permits odd flashbacks to idyllic memories from their time spent with the mutual object of their affections.

That description makes Hallelujah the Hills sound too organized. Its slapstick comedy refuses to follow established rules. Although there’s plenty of on-set synchronous sound, the story frequently uses silent movie irises and inter-titles. Like some films of the French New Wave, it occasionally refuses to hide its own artificiality, as when near-proposal scenes supposedly spread across seven years are all obviously edited from the same shot. Handsomely filmed in 35mm, the show avoids formal compositions, but frequently plays with that convention. At one point it imposes little frames over a couple of scenes, marking possible compositions within the frame, as would a photo editor. A few more visual jokes are imposed on the image with optical tricks, as when vertical Asian subtitles appear at the edge of one shot!

But most of what we see is staged as an absurdist comedy. Jack and Leo clown about, stumbling through the Vermont woods. They shoot guns, they throw lumber into the river. They manage to make this nonsense look unplanned. The main comic material covers their memories of incompetent courtships, and introduces the broadest avant-garde strokes. Vera is played by two actresses. Jack’s Vera is Sheila Finn, who later showed up in some French TV work. Leo’s Vera is played by Peggy Steffans, the same actress who worked with, eventually married and produced a decade’s worth of adult/experimental films with another maverick New York director, Joe Sarno. The one time that both swains visit Vera, she’s seen only from behind so we can’t tell which actress is being utilized. To illustrate their rivalry at the dinner table, the two men go at each other with culinary weapons. In a gag suitable for a Three Stooges comedy, Leo pinches Jack’s nose with a nutcracker (leaving marks!). Introductory shots of the two Veras use soft vignetting, framing her as D.W. Griffith might frame Lillian Gish back in 1912.

Although Vera is strongly attached to both men, each puts off a proposal of marriage, leaving both with seven years of awkward memories of the patient Vera. The indecisive Leo visited in the summer, and Jack came by in the winter. Jack’s memories of play in the snow would scare anybody not a member of a Polar Bear Club — they run and play barefoot, even on the ice-covered local stream. Jack runs about naked in the snow, and even swims in the presumably freezing water. The film’s one specific cinema reference comes when an inter-title announces a break to pay homage to Griffith’s Way Down East, with the famous scenes on the ice floes.

All of this reminiscing takes place while the boys are camping in the same woods where most of the rest of the movie plays out. In one scene they unpack a birthday cake, with candles that are already lit. The next day it becomes a target for their guns as it floats down the river. The joke isn’t played for silent-movie laughs, like passages in Richard Lester’s Beatles films; it’s more like off-the-wall drollery. There are also few if any jarring editorial effects. What’s being celebrated is the freedom from commercial and narrative constraints. Vera is quiet and thoughtful, the boys tend to be doltish jokers, and the wise-acre father doesn’t mind teasing them mercilessly. A couple of scenes of home life in Vera’s house frame momentary bustles in the kitchen, or focus on Mom complaining that nobody helps her with the chores. Then Mom will suddenly stare at the camera, as if saying “I know you’re there and I don’t care.” It’s all too obscure and mysterious to be joke-driven, and it’s far too stylized to be character driven. It appears to be ‘cinema-driven,’ way before self-conscious and self-referential filmmaking became a thing.

A still photo shows cameraman Ed Emshwiller shooting out in the country with a large, fully-blimped 35mm camera on a standard studio tripod. This accounts for the sync sound but must have made for a laborious production — lugging even a little camera through those woods would be a chore, but Emshwiller’s reportedly weighed 135 pounds.

The film is 100% committed to the idea of play. The characters might as well be cartoons, although Jack and his Vera look beautiful enough to be fashion models. Vera is playful but none of the humor assails her dignity: she was patient with her beaus, she had some laughs with them, and then she moved on. Naturally, the boys imagine that the winner Gideon behaving as an uncouth creep, to the woman they love.

A perfunctory finish sees our two confused heroes encountering a pair of escaped convicts, who wear striped pajamas suitable for a silent movie. But a few minutes before that is the film’s most poetic, baffling scene. Posing as intrepid hunters, the two losers in love come upon a bizarre sight: a barren tree with perhaps twenty fashionable women sitting and standing up in the branches, high above the ground. Is the scene saying, ‘don’t give up boys, because there are always other women to woo?’ It’s a sight that Luis Buñuel would love. Meanwhile, we’re wondering how those actresses possibly got up there, wearing their nice clothing. Was there a cherry picker handy?

The Kino Classics Blu-ray of Hallelujah the Hills is an impressive presentation of this landmark of ‘The New American Cinema,’ before the term was hijacked to represent director-centric mainstream fare of the late ’60s and early ’70s. No, this New American Cinema has more to do with experimental short subjects and maudit underground fare like Jack Smith’s Flaming Creatures. Andy Warhol was said to be heavily influenced by Hallelujah the Hills, and  Warhol’s associate Taylor Mead plays one of the slapstick escaped cons in the finale. There is also the connection with Joe Sarno.

Of special mention is the film’s eccentric, joyful and quite beautiful music score by Meyer Kupferman. The cues never do anything predictable, but instead engage in the same kind of play that director Mekas is encouraging. Kupferman contributed scores for a number of marginal, alternative independent films of the sixties: Allen Baron’s Blast of Silence, Carl Lerner’s Black Like Me and Philip Kaufman’s oddball New American features Goldstein and Fearless Frank. Come to think of it, Kaufman’s two pictures have in common with Hallelujah a similar love of goofy cinematic horseplay.

Part of the film’s festival popularity may have been due to a low ratio of censorable content. The only shot that might have been dropped for TV is an angle on Jack running naked through the Vermont snow. In the film he’s pale white against the bright white snow, but in still images his figure is darkened. After waiting years to finally see Hallelujah, I expected to see a black man as one of the characters.

The producer of this disc is a company called Re:Voir Video; their animated logo is amusingly indecipherable. Knowing full well that a 55 year-old experimental movie needs all the explanation it can get, Re:Voir’s disc producer Robert Sweeney provides a ten-page insert pamphlet with an essay by John Pruitt. On the disc are three video curiosities. From 1963 is a TV interview that gathers cinema notables Adolfas Mekas, Richard Roud, Amos Vogel and Joseph Losey for some light chat to promote The First New York Film Festival. It’s odd to see for the first time people one has read about for many years. The print appears to be an old kinescope.

Hallelujah the Villa is a half-hour video joke starring Adolfas Mekas. Supposedly a rich man from the proceeds of his one well-known film, Mr. Mekas is interviewed in a Mediterranean estate overlooking the ocean, attended by a score of young female admirers. In a joking mood, Mekas points out that his film had the idea of casting two actresses to play the same woman, years before Luis Buñuel in That Obscure Object of Desire.

The third item ‘An Interview with Ambassador from Lapland’ (1967) appears to be a sync sound color camera test, for which Adolfas Mekas launches on a four-minute nonsense speech. He was polite and reserved back on the old kinescope promoting the film festival, but here proves himself a glib verbal joker.

Note: the movie is transferred flat at 1:37. Several sources say that it was meant to be widescreen, as with any normal theatrical feature from 1963. When Mekas uses animation effects to superimpose ‘composition frames’ within the frame, the rectangular frames are in a widescreen aspect ratio. Cropped to 1:78 on a widescreen monitor, a couple of the title blocks in the main titles are compromised. It looks fine flat, so maybe Re:Voir made the right choice.