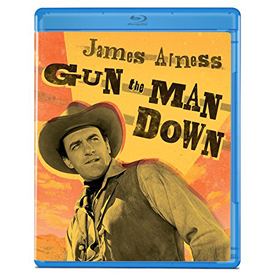 When the 1950s rolled in John Wayne stopped being merely an actor and graduated to institution status, starting his own production company, Batjac, and promoting his own group of talent. His star appeal was so solid that John Ford had already been piggy-backing on his bankability to get his movie ideas green-lit. Wayne’s associated with talented veterans like director William Wellman, and he made smart films like The High and the Mighty, an all-star epic thriller that was really quite economical.

1956’s Gun the Man Down could be labeled a ‘tryout’ picture, a western designed to introduce new talent that Wayne believed in. His brother Robert produced both this and the more expensive Seven Men from Now; both were written by a newcomer named Burt Kennedy. Wayne protégé James Arness had just been launched in the TV show Gunsmoke. And finally, actor Victor McLaglen’s son Andrew V. McLaglen was given the big push into the director’s chair, with this show and a crime thriller, Man in the Vault. 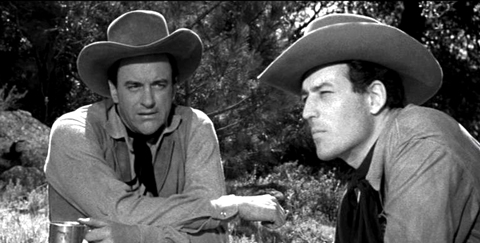 Viewers in 1956 were surely not impressed by Gun the Man Down. It looks like it was filmed in few days’ hiatus from James Arness’s TV show and can boast neither color nor big stars. But it holds up rather well because of our interest in the cast and a simple but sturdy screenplay, which gives the actors decent scenes to perform.

“In the old west,” young Rem Anderson (James Arness) agrees to rob a bank to fund a farm so he can settle down with his girlfriend, Janice (Angie Dickinson). But he’s wounded in the raid, and his confederates Matt Rankin (Robert J. Wilke) and Ralph Farley (Don Megowan) leave him behind because he’s unable to ride. Janice leaves with them too. A year later Rem is released from prison, and goes looking for his ex-partners. He didn’t rat them out, and now he wants revenge. When he catches up with the trio, he finds that they’re running a saloon together. Janice is now Matt’s girl. Janice tries to explain why she chose to run away, but Rem is dead set on killing his former partners. Their immediate solution for the problem is to hire gunslinger Billy Deal (Michael Emmett) to plug Rem, for a cool five thousand dollars. Observing from the sidelines is the wise old Sheriff Morton (Emile Meyer). He’s the only law in town, and his deputy, Lee (Harry Carey Jr.) is so inexperienced that Morton sends him fishing whenever it looks like trouble is on the way.

Gun the Man Down is a trim little show that almost overcomes its low budget. The story is as generic as they come, yet Kennedy and McLaglen manage to inject some immediacy into the proceedings; James Arness was always likeable, and here he’s stalwart leading character despite Rem Anderson’s lack of admirable qualities. The actor plays the role exactly as he did Matt Dillon, barely taking into account the fact that Rem is on the wrong side of the law. Taking acting honors are the colorful players Emile Meyer and Robert J. Wilke. Meyer played good and bad characters in crime stories and westerns; he’s great as the main bad guy in Shane. His immortal line of dialogue is from the classic Sweet Smell of Success: “Come here Sidney, I want to chasTIZE you!” Dependable Robert J. Wilke was one of the three villains in High Noon and for more than a decade played western bad guys almost exclusively. 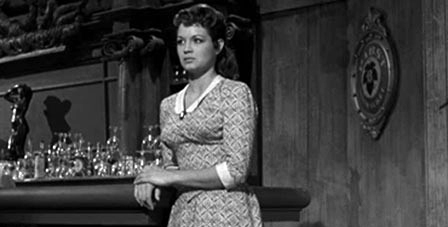 Angie Dickinson is given an ‘introducing’ card although she’d been around in small parts for a couple of years. I first saw her as the adventuress in China Gate, where Sam Fuller famously arranged to stretch her ‘Lazy Legs’ across the full length of the CinemaScope screen. Just one year earlier, Dickinson seems practically a teenager, with her share of cute baby fat.

Considering that the show has next to no production value, Gun the Man Down maintains a good tension for most of its running time. It begins with a robbery scene that happens off-screen; all we see is a montage of three guns firing. The bad guys run a wild saloon but we never see it in operation; Dickinson’s Janice instead tells us how sinful it is. But the movie has well written personal confrontations. Almost like a babysitter, Sheriff Morton uses psychology to keep his deputy from getting too excited about the dangerous men in town. Billy Deal takes the job of killing Rem less than a day after chatting with him on the trail. Janice tries to explain to Rem that she was never a good girl, but she was sincere in wanting to marry him and settle down. And she reminds Rem that it was his idea to bankroll their future with a stupid crime. As in Burt Kennedy’s later, celebrated Budd Boetticher westerns for Randolph Scott, the already minimal plot narrows down to a series of deadly confrontations, the final being a duel in a box canyon. Considering that a lawman was shot, it’s surprising that Rem got off with only a year in prison, or that nobody is dogging him to recover the money that was stolen.

Just starting out, Andrew V. McLaglen does his best to give his movie good pictorial values, and cameraman William Clothier helps him select some good angles. The interiors are still drab and generic, but the blocking of action in the western street set is quite good. Unfortunately, much of the final action takes place among a random landscape of brush and rocks. Still, the personalities on view keep our interest, and Gun the Man Down shapes up as an okay western attraction. It certainly plays better than some of the other United Artists low-budget oaters of the late ’50s, even pictures by directors like Gerd Oswald. 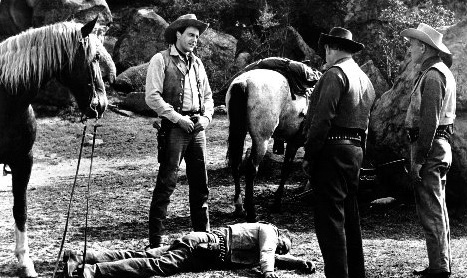 Olive Films’ Blu-ray of Gun the Man Down is a serviceable transfer of this small-scale dramatic western. For some reason the B&W image is a little dark and grainy; the day for night scenes are so dark that, if original prints were like this, drive-in theaters would not be pleased. Ms. Dickinson’s beauty shines through, and the transfer certainly does not get in the way of the drama.

Gun the Man Down is a good choice for fans of James Arness and Angie Dickinson, and for those aware that the film was produced under John Wayne’s business umbrella. Ms. Dickinson would continue to work steadily, but the case can be made that her stardom was really launched when she co-starred with Wayne in Rio Bravo, two years later.

I wouldn’t be surprised if Olive Films sourced Greenbriar Picture Show’s photo from their article two years ago for the disc box art — I’ve pinched it as well. And at the moment Olive can do know wrong — they’ve promised a widescreen special editon Blu of Johnny Guitar for the near future.