I had never heard of this comedy-thriller, and the good news is that it’s a pleasant surprise, thoroughly enjoyable. The toughest kind of filmmaking must be making comedy seem effortless, and that’s what Eric Blakeney does in this quirky, near-screwball take on the done-to-death drug deal undercover thriller. Liam Neeson is sensational, and producer Sandra Bullock is at her most charming. Even the flatulence jokes are funny. 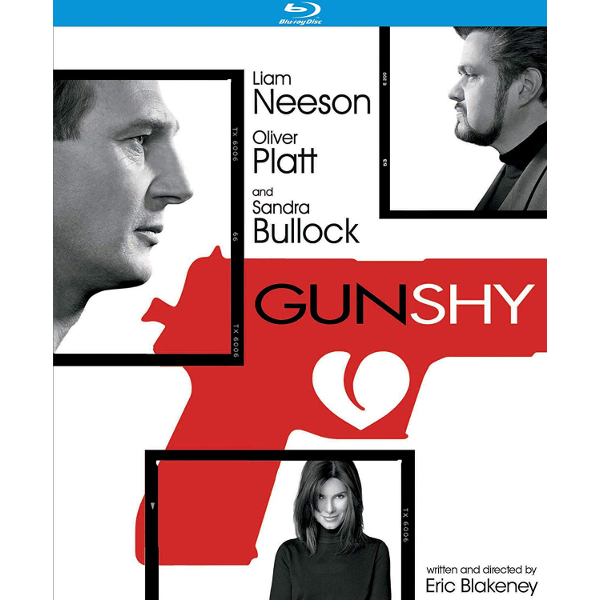 I’d just been thinking about classic Screwball Comedies when Eric Blakeney’s Gun Shy arrived, begging to be screened. The 2000 release was produced by Sandra Bullock, whose taste varies from film to film — she can be cute in harmless comedies like the Miss Congeniality pictures, only to be really disappointing in the appallingly wrong-headed The Blind Side, a picture that has unofficially earned the title My Pet N_____. At first glance Gun Shy doesn’t seem all that promising: who needs another action comedy lampooning the grim War on Drugs? Liam Neeson plays a police agent experiencing anxiety issues, who is coerced back into a dangerous high stakes undercover operation. It feels serious yet is also continuously amusing. I think it works; in fact I loved the off-balance tone of the thing. The unpredictable characters are so well observed that occasional absurdities are not a problem.

It’s so good that even a streak of bathroom humor doesn’t matter, and I hate lazy flatulence jokes. Gun Shy is a diverting surprise all the way until the last scene. That it ends a little on the weak side doesn’t negate its cumulative positive energy. Liam Neeson, one of the most underused actors around, maintains a terrific serious-comedic character — everything Neeson does is believable, no matter how silly things get.

TV writer Eric Blakeney (Wiseguy, 21 Jump Street) puts his stress on off-balance character interaction. Government cop and undercover specialist Charlie (Liam Neeson) has been severely traumatized. In his last assignment he and his partner were captured by a maniacal druglord and made the centerpiece of a night of terror and murder in a decadent Miami palace; only Charlie escaped alive. Since his cover wasn’t blown, his law-enforcement keepers want Charlie to pursue the case in New York, to infiltrate meetings between the same South American drug cartel and a Mafia group. Forced to comply, Charlie meets the ruthless Fidel Vaillar (José Zúñiga), the Mafia hit man-turned negotiator Fulvio Nesstra (Oliver Platt) and Fulvio’s financial connection Jason Cane (Andy Lauer). Their aim is to launder huge amounts of drug money on Wall Street. Charlie is normally an expert capable of trading small talk with suspicious, merciless killers. But his nerves are shot, and he survives the first get-together only by sheer luck. When Charlie over-tranquilizes himself, the paranoid Fulvio misconstrues his lack of reaction to a death threat as evidence of ‘nerves of steel.’

Things soon become goofy. Charlie doesn’t realize that his adversaries are just as unstable as he; his job in the sting operation is to keep them from killing each other. The murderous Nesstra is henpecked by his Italian-American wife (Mary McCormack) and fighting back terrible feelings of inadequacy imposed by his unforgiving father-in-law, mob chieftain Carmine Minetti (Frank Vincent). Fidel, the slick South American with money to launder, travels with his gay partner Estuvio (Michael DeLorenzo) as his bodyguard. Fidel is highly suspicious of the incorrigibly blunt Jason, who talks like a loose cannon and tries to turn their meetings — in restaurants, on a yacht — into gourmet opportunities. All decide that Charlie’s presence is invaluable after prevents a panic during a meeting with SEC accountants. Charlie even holds the alliance together after Fulvio shoots off one of Estuvio’s testicles in a men’s room.

But Charlie’s act is coming apart at the seams. His bosses won’t let him quit. They continue to interpret his eccentric, insubordinate behavior as the quirks of a super-spy. Charlie’s psychiatrist sends him to a group session, where he openly discusses the details of his mission. The frustrated corporate workers compare their awful, soul-crushing jobs with Charlie’s high-risk undercover suicide mission. Charlie’s stress affects his gastrointestinal tract so badly that he can barely function. Nurse-technician Judy Tipp (Sandra Bullock) immediately falls for Charlie and makes him her special romantic project. She succeeds in straightening out his intestines by getting him involved in carefree dates doing things like wallowing in dirt to cultivate her rooftop garden. Charlie is charmed, but still must find a way to survive a criminal alliance destined to end in more bloodshed. The group session associates begin to get involved, and there’s treachery back at his home office as well.

Gun Shy may not be a classic but I found it highly creative and entertaining. It essentially crosses the standard post- Miami Vice cop saga with the vibe of a screwball comedy. Every scene comes with a surprise that both heightens the tension yet tells us not to take things too seriously. Unpromising ideas like the group therapy sessions surprise us by being both fresh and funny. The talented Oliver Platt makes his Mafia hit man into a character worthy of, say, Married to the Mob, but with unexpected touches. The murderous Fulvio threatens to cut his neighbor’s hand off with an axe, yet is so intimidated by his wife that he scrubs the kitchen to a high polish, rather than ask her to clean up. By chance Fulvio comes to believe that Charlie is an incredibly competent super-criminal, and begins to worship him. Fidel and Estuvio almost start a shoot-out based on a harmless misunderstanding over an ethnic slur. Charlie holds the mob together against all odds — the higher-ups on three sides of the deal have already decided that bloody betrayal will be the most profitable outcome.

Liam Neeson (hearty recommendation: Rob Roy) has genuine star power. He expands the character and fleshes out situations that may not have been so impressive on paper — a bad version of this story could be as lame as a Police Academy movie. Neeson is better than most of his films; I remember him complaining about the low quality of movie projects he was being offered, around the time of the insipid Star Wars prequels. All of his later knee-jerk revenge/vigilante pictures are indeed a waste of his talent. Here in Gun Shy Neeson elevates and lightens the material through sheer personality. I bring up the Screwball Comedy comparison because the tone of Gun Shy plays the same kind of balancing act — making fun of a genre but also standing on its own.

Very interesting is a somewhat wild opening that intercuts flashbacks to Charlie’s debacle in Miami, where a power-crazed druglord is executing both Charlie and his partner in a way that might have appealed to Caligula — they’re both hogtied and trussed on silver serving plates on a banquet table, as if the villain is going to have them roasted like pigs. The centerpiece of the room is a grouping of nude women made up as living statuary. The scene was probably filmed full length and then edited down to prevent it from making the movie too perversely bizarre; we see just enough of it to establish that Charlie’s continuing assignment could be just as hazardous. Drug crime atrocities from the Reagan era could be as bizarre as this — we’ve all heard rumors of ultra-rich maniacs committing grotesque crimes just to enhance a fearsome image. Charlie’s helplessness in this scene fully motivates his later lapses into momentary self-doubt and quivering cowardice.

Second-billed Oliver Platt really shines — we accept him as a freaky psycho hit man (but funny) and then further enjoy his elaboration as a maladroit loser unhappy with his chosen lifestyle. As we don’t associate the actor with action roles the idea of him as an efficient killer take a bit of effort. Blakeney doesn’t stress action scenes or stupid Bad Boys– type visual baloney, but he does give us an unlikely view of the Fulvio character diving sideways in slow motion shooting a gun. It’s amusing to see Platt engaged in a hit man maneuver seemingly taken from Ian Fleming’s book Diamonds are Forever.

Producer Sandra Bullock must have believed in Blakeney’s script, for she throws herself into her supporting role without playing star vanity games. There’s just enough of Bullock in the movie to let us appreciate her charm. This was just when American comedies were collapsing into the gross-out humor mode that dominates films today, and irritates me to no end, I must admit. Gun Shy has a strong vein of gastric distress humor, with toilet jokes, constipation jokes and enema jokes — and to my surprise none of it grates. Bullock’s Judy Trip is introduced administering an enema to our hero (so much for male dignity), cheerfully identifying herself as ‘The Enema Queen.’ She takes Charlie’s welfare into her capable hands, tossing away his meds and introducing a calming influence into his life. The script bounces between the part-comic high-jeopardy scenes and the part-comic romantic scenes, yet holds together.

Director Blakeney gives us reasons to like all of his characters. Of special note are the group therapy guys, who begin as stereotypes but almost immediately warm up into equally lovable individuals, even the vice president who advocates a take-no-prisoners office policy. A standout in the group is the worrywart played by Richard Schiff, who was already a regular on the West Wing TV show. A scene where Schiff’s character recognizes Charlie in public, at an inopportune time, is perfectly handled — a mix of the believable and the preposterous.

I’ve chosen to simply ignore the last scene in Gun Shy, where someone’s need for a conventional wrap-up does indeed push things too far. The twist I’m talking about belongs in a fantasy scene in TV’s Friends, not this movie. Yes, I can’t think of an ending that would work better, but what we’re given jumps to a happy-happy level that doesn’t quite make it.

Just the same, the overall effect of the show is very positive — I’m almost afraid to show it to friends, for fear that they’ll not see the good qualities that entertained me. Part of the surprise was never having heard of this picture before. I likely looked the other way at the sight of Sandra Bullock’s name. It’s not like we have to see every show that’s recommended to us, but I’d give Gun Shy a chance.

The KL Studio Classics Blu-ray of Gun Shy is a bright and polished encoding of this release from Hollywood Pictures, a Buena Vista production-distribution offshoot that stayed in business for 21 years. The generic opening images show glistening views of Manhattan, featuring the now- haunting World Trade Center.

A trailer is included, along with a pleasant feature commentary from Eric Blakeney, who candidly discusses many of his decisions and ideas. I don’t know if it’s a new track or one from an earlier release. For me, this whole show is a pleasant surprise.