Rock Hudson and Donna Reed star in a kidnapping-vengeance-pursuit western filmed in large part in gorgeous Sedona, Arizona, in 3-D and (originally) Technicolor. It’s another 3-D treasure from the 1950s boom years. The trailer is in 3-D too. 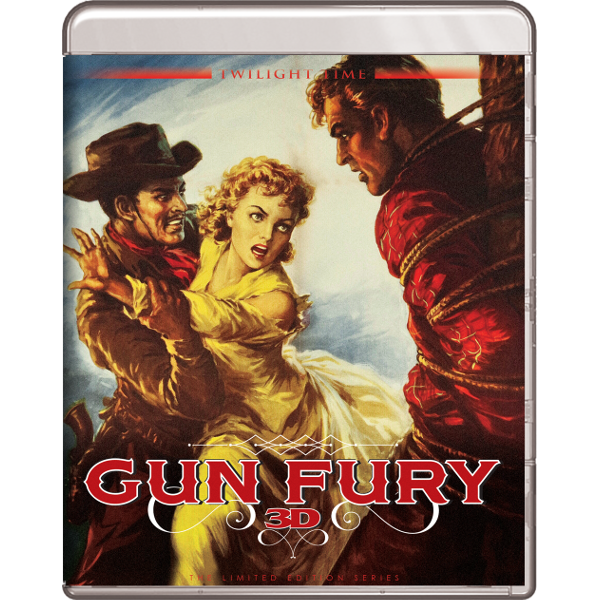 I have a new theory for why the 1950s 3-D craze only lasted about 2.5 years: they couldn’t find any more one-eyed directors to make them.

Gun Fury arrived at the end of 1953, in the thick of what would be called the ‘fad’ of 3-D. Columbia Pictures jumped into ‘depth pictures’ as if it were a gimmick, and only their Rita Hayworth movie Miss Sadie Thompson was a solid ‘A’ production. The intriguing noir Man in the Dark and the Vincent Price horror picture The Mad Magician lean on the novelty of 3-D to generate interest. The Blu-rays available of those titles are excellent demo discs — early 1950s ‘organic’ 3-D has a special look.

Nevertheless, Columbia’s 3-D westerns look like ‘A’ pictures simply because the outdoors cinematography is so attractive: Fort Ti, The Stranger Wore a Gun. Gun Fury looks especially good because much of the show is filmed in Sedona, Arizona, with its towers of red rock formations. The director is the venerable Raoul Walsh and the stars are Rock Hudson and Donna Reed, but it’s not a major production. Never a man to be tied down to one studio, by ’53 Walsh (White Heat) was a freebooter taking the best deals he could find. Rock Hudson wouldn’t get a boost with the management back at Universal-International until Magnificent Obsession with Jane Wyman. And despite critical acclaim (and soon, an Oscar) for her terrific performance in From Here to Eternity, Donna Reed would continue to play secondary wives and girlfriends. Five years later, she’d retreat to bankability with her own popular TV show.

The real beneficiaries from this particular oater are the writers, novelist Irving Wallace and future TV giant Roy Huggins. The versatile Huggins was turning out fine comedies and smart films noir, in addition to his two Columbia westerns. The other, made the year before, was the similar treachery-on-the-trail western Hangman’s Knot, with Randolph Scott – and Donna Reed. The novelty of 3-D is indeed a big asset, for Gun Fury does not have a particularly distinguished storyline. En route to California to marry, Easterner Jennifer Ballard (Donna Reed) rides a stagecoach with Frank Slayton (Phil Carey) and Jess Burgess (Leo Gordon), ex- Southerner renegades with criminal plans. Jennifer turns down Frank’s rather obnoxious/genteel advances, and is overjoyed when her fianceé Ben Warren (top-billed Rock Hudson) arrives – he’s traveled to Arizona to accompany her the rest of the way. But Slayton’s gang robs the stage on the next leg of the trip. Frank kidnaps Jennifer with the object of carrying her off to Mexico; he thinks he’s killed Ben. But Ben recovers and sets off in pursuit. Along the way Ben teams up with Jess, who has been left lashed to a fence, for daring to defy Frank’s authority. Along the way they’re attacked by the Indian Johash (Pat Hogan), only to end up with a third revenge-seeker on their team: Frank Slayton murdered Johash’s sister. Of Frank’s remaining henchmen, two are less than thrilled by the kidnapping of Jennifer, which they feel is bound to trip them up. Brazos (Neville Brand) has little to say but Blinky (Lee Marvin) is so insolent that it begins to get on Frank’s nerves. The thieves pause at a way stop where has been waiting yet another of Frank’s women, the foolishly loyal Estela Morales (Roberta Haynes). Frank somehow thinks he can have his captive Jennifer, and keep Estela on the side.

Gun Fury is a generic revenge-pursuit with some strange details. Phil Carey’s ex- Southern bandit is something of a fancy-man psychopath, and certainly a misogynist. Except for grinning a lot he is just given ordinary villain status, which makes him less interesting. Frank seems to think that the glory of the Confederacy entitles him to abuse women, while spouting good manners. You had to be watching TV in 1967 to understand Philip Carey’s real contribution to American culture: here’s a deathless Granny Goose Potato Chips TV Spot that explains everything. Note that the also reflects a campy awareness of Humphrey Bogart worship.

The movie isn’t particularly violent, but it does allude to tortures we don’t see directly, especially when Curly, a member of Frank Slayton’s outfit goes ‘chivalrous all of a sudden’ and tries to help Jennifer escape. Later on we’re told how he was killed, without getting a clear look at the remains. Curly is played by Bob Herron, a stuntman who stayed on the job forever, doubling stars into his eighties. Rock Hudson has the noble, peace-loving boyfriend role to play, and as such is a handsome bore, without a single original thought in his head. But his Ben Warren should go into politics, as he’s a real coalition builder, enlisting both a crook and an ‘Injun’ (’50s attitude) on his rescue mission. We feel pretty badly for Donna Reed, who never gave a bad performance yet seldom received a really worthy role. Here she’s roughed up and dragged in the dust, at least until the stuntwoman takes over. She’s then forced to play a dumb cluck, sitting in a washtub for a 3-D bath with a gaggle of Mexican prostitutes clucking over her. One scene fades out as Phil Carey pins a terrified Jennifer to a door. We can’t know for sure, but in the CineSavant Guidebook to Dirty Film Interpretation™, the fade-out says that snidely Frank had his way with poor Miss Jennifer.

Other than the attractive 3-D illusion, the most enjoyable thing about Gun Fury today are the film’s three name-actor henchmen. The flashy Lee Marvin has all the good lines, whining and complaining about taking Jennifer along, and then looking forward to (apparently) raping Estela. More than once, Frank offers one of the women to his cohorts, as a bribe to elicit their loyalty. After what Frank does to Jess and Curly, we’d think nobody would trust him. Neville Brand has almost no lines; we wonder if director Walsh just wanted to move things along, rather than play up all the personalities he was dealt. Getting the most attention is the great Leo Gordon, a genuine ex-con who became a good actor and an accomplished screenwriter, often for Roger Corman. He was often described as ‘scary looking,’ and his massive build and bright blue eyes made him an excellent bad guy. Gordon was burly enough to be a threat to John Wayne in Hondo. He married Lynn Cartwright, a gorgeous, very tall actress now well remembered for playing the elderly Geena Davis in A League of Their Own. I say, sometimes you can judge people by the people who love them.

Roberta Haynes enjoyed a long and busy career, but after seeing her marvelous work in Mark Robson’s Return to Paradise I can’t help but feel that she was robbed. She’s Polynesian in that movie and Cuban in John Huston’s We Were Strangers. We’re also told that she lost out to Donna Reed for the plum role in From Here to Eternity. Here in Gun Fury Ms. Haynes must play a humiliating Mexican stereotype, and must babble out fast Spanish dialogue in a woeful accent. For an actress aiming for better things the part is a real career-killer. When I first saw Roberta Haynes on screen I was confused — her Estela looks a lot like actress Jeff Donnell. The screenplay tries for a bit of High Noon flavor when Ben Warren can’t get a sheriff to pursue Frank Slayton, and neither will some citizens stick their neck out to form a posse. It also makes time to demean Mexicans, by surrounding the virginal Jennifer with some cruelly sarcastic bar-girls, who nonetheless give her a bath as if they were naturally meant to serve gringas blancas. Even worse, the actor playing major character Johash, the vengeful Native American, isn’t even listed in the billing. He’s Pat Hogan, an actual American Indian actor born Thurman Lee Haas. Hogan did get a better part in Anthony Mann’s western The Last Frontier, and just made the billing card.

Raoul Walsh and cameraman Lester H. White don’t go in for anything fancy, except when they change to a different lens for medium shots where people throw things at the camera. The complexity of the 3-D rig did not encourage multiple angles or trucking shots. The plan was likely to let the 3-D do the talking. Outdoor vistas look great when there’s something in the foreground to give extra depth, as there’s little or no 3-D displacement between something 100 feet away, and infinity. I remember that at least one 3-D picture at Warners pulled recycled flat stock shot scenes of runaway wagons, etc., by re-photographing them on a rear-projection process stage, and moving prop rocks, trees, etc, in the foreground to cheat a 3-D look. Very sneaky. Raoul Walsh and producer Lewis Rachmil don’t stoop to that level. The show uses rear projection but most of what we see was filmed in the great outdoors, with the nice views, hot sun, splintery logs, irate marmots, etc.. Even if she wasn’t dragged behind a horse, I sympathize with the lovely Ms. Reed on this one. The Twilight Time 3-D Blu-ray of Gun Fury is a good encoding of this vintage color Columbia western. The restoration appears to be a noble rescue job that pulls acceptable-plus images out of what must have been difficult surviving elements. In these early years of mono-pack Eastmancolor film, original negatives sometimes remained stable, but many faded in ways that caused difficulties later. The original brilliant Technicolor look could be difficult to re-create photo-chemically. The show has a lot of dissolves, and the optical dupe for each dissolve covers the entire shot, not just the dissolve area. There’s no jump at a splice, but in the photochemical finish, much of the film is going to be an optical of slightly degraded quality.

Color values are fine but the images are grainy and coarse. Overall most of the show is slightly ‘dupe-y,’ with the grain and density getting rough. I could only guess but I’d say that Sony’s best digital tools were needed to put the picture into good shape.

The 3-D is, as ever, a pleasure. It’s quite a kick seeing a ’50s oater in depth like a View-Master attraction, both in familiar back- lot western streets, and out on the distant Arizona location.

The music would seem to be a grab bag of cues from the Columbia music department. One cue, a romantic bit where Jennifer and Ben are first seen together, sounds very familiar — I associate it with a memorable scene in another (earlier?) picture. If anyone recognizes it, I’d like to be reminded what it’s from.

Twilight Time gives us a partial Isolated Music track, as if some of the cues could not be located. A special treat is a trailer that can also be viewed in 3-D. Color values and sharpness on the trailer are better than what is seen on the feature. Julie Kirgo’s liner notes go for the big personalities on the show, especially the seemingly unstoppable Raoul Walsh. Even when the studios would probably want the veteran to go away, stars like James Cagney and Clark Gable kept Walsh going, making entertaining pictures in the new formats and processes.