When is a private eye parody not a parody? Stephen Frears’ first feature strikes a delicate balance — its nearly absurd hardboiled lingo outdoes the spoofs, but the story and characters are pitched 100% straight. Albert Finney IS Eddie Ginley, surrounded by a pack of exciting, imaginatively cast actors. 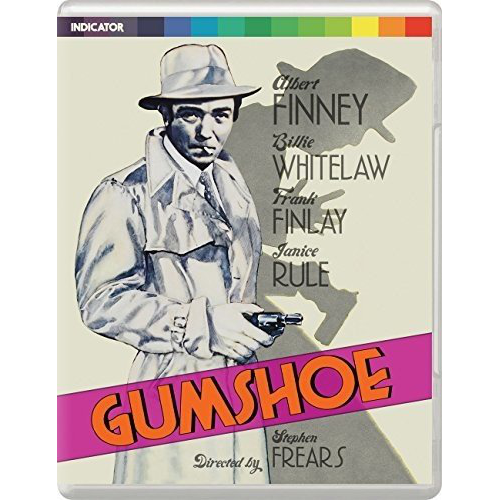 At first one thinks it’s a parody, and not a very good one. Then we wonder if Albert Finney is simply taking his Humphrey Bogart imitation out for a walk, as when he teased Audrey Hepburn in Two for the Road. But then we realize that we’re watching a respectful reworking of classic hardboiled pulp fiction. The main titles employ a vintage ’30s design motif, something that Roman Polanski would also do for his later Chinatown. Stephen Frears’ first feature film Gumshoe is an unlikely mix of fantasy and reality, which befits the nature of a leading character that speaks almost exclusively in near-absurd Raymond Chandlerisms. Is Albert Finney’s Eddie Ginley some kind of arrested development case? If that were so most of the people he meets would respond to his too-smart banter with a simple, “What?” or “Excuse me, I didn’t get that.” No, Gumshoe cultivates an intentional fantasy surface. It takes a couple of minutes for the poetic tough talk to begin to sound natural. As Rocco Gioffre once summed up classic hardboiled banter, “The secret is that nobody ever gives anybody a straight answer.”

When he isn’t simply unemployed, the trench-coated Eddie Ginley (Finney) calls bingo numbers at a local music hall in a depressed area of Liverpool. He lusts after Ellen (Billie Whitelaw), the wife of his brother William (Frank Finlay) with whom he doesn’t get along. Eddie loves rock ‘n’ roll and wants to be a comic, but he also indulges his love of Dashiell Hammett by putting an ad in the paper calling himself a private eye named Sam Spade. To his surprise he gets an immediate call that puts him on a case that just doesn’t add up. The mysterious job involves, not necessarily in this order, a woman in danger named Alison (Carolyn Seymour), her black friend Azinge (Oscar James), a corpulent drug addict (George Silver), and a treacherous woman of mystery named Mrs. Blankerscoon (Janice Rule). Ginley trades Bogie-Bacall seductive talk with Alison, typist Anne Scott (Wendy Richard of No Blade of Grass) and occult bookstore clerk Naomi (Maureen Lipman), who assures him that she blooms after closing hours. He’s also pursued by a dogged tough guy named Straker (Fulton Mackay), who tracks him all the way to London. Eddie doesn’t trust his sister-in-law Ellen, and figures that the mystery has something to do with gun smuggling, the heroin traffic and the suppression of the Black majority in South Africa. Are his relatives trying to protect him, or is he being set up as a fall guy?

Gumshoe’s classic story structure makes it a nostalgic pleasure. It’s not really one of the abrasive New Brit Crime pix of the ’70s, like Get Carter, Villain and The Squeeze. Writer Neville Smith’s tight screenplay is packed with hardboiled bon mots and delightfully snappy repartee. Ellen and William just sigh in frustration at Eddie’s sardonic wit, while others play along as if they’ve been watching The Big Sleep in repeat mode. The one bald lift from a familiar source is the bookshop scene from The Big Sleep, with Maureen Lipman playing the seductive Dorothy Malone part. Somewhat problematic is Eddie Ginley’s goading of the black character Azinge, with a constant flow of abusive jabs about apes and bananas. Eddie’s occasional offensive humor is authentically Liverpuddlian but wide open for criticism.

The characterizations, however, are far better than in most period detective shows. Oscar James’ Azinge takes back his pride with a two-fisted demonstration that Eddie is not The Great White Hope. The worldly-looking Janice Rule (The Chase) is a marvelous Mary Astor substitute, who wanders into just three scenes to tempt Eddie and commit a cruel murder. Is Frank Finlay’s shady businessman brother a total jerk, or is he really looking out for Eddie’s best interests? Is Eddie’s old flame Ellen serious about being willing to run away with him, or is she just trying to trip him up? I don’t know if Liverpool has attractive picture postcard views, but if they exist the art directors of Gumshoe have taken pains to avoid them. The great cinematographer Chris Menges shoots the picture at odd times of the day, pulling atmospheric vibes out of feeble dawns and murky overcast afternoons. Eddie’s headquarters is the variety club, where his sweetheart of a boss Tommy (Billy Dean) decorates his office with fake photos of himself posed with celebrities. Instead of the hostile underworld of something like Night and the City, Eddie has a network of employers and friends who look out for him. Even the ostensible villain ‘Slyboots’ Straker, whose mission ‘Gumshoe’ Ginley has disrupted, turns out to not be what he seems. Eddie musters the old Philip Marlowe spirit with just a little help from his friends: solving the mystery with just a few deft moves, he zeroes in on an international crime conspiracy. He even gets to use a snub-nosed .38, although not in any kind of gunfight. Eddie Ginley has what it takes. When Stephen Frears was starting out, his talent appears to have impressed everyone he came in contact with. Albert Finney backed both this picture and Frears’ 1967 short film The Burning, which is more directly concerned with South African apartheid. Gumshoe was critically lauded but did little business, True, it has little conventional violent action, and casual viewers might actually be turned off by Albert Finney’s Bogie imitation. Director Frears went forward to a fine career of highs and lows. Crime fans dote on his searing Jim Thompson adaptation The Grifters (1990) but they should also track down his sensational The Hit (1984) and Dirty Pretty Things (2002).

Why is Gumshoe so satisfying? I credit an ending that isn’t afraid to be unabashedly positive, with our unlikely hero Eddie brilliantly tying up all the loose ends like the pro he aspires to be. He’s not a bad standup comic, either. Powerhouse Indicator’s Blu-ray of Gumshoe is a beautiful encoding (from Sony) that erases old memories of murky, flat TV transfers. I believe that the show had its U.S. premiere at the first Los Angeles FILMEX, but I missed it there. Even given the dank Liverpool setting, Chris Menges’ images are colorful; the local atmosphere is as fascinating as what’s seen in Get Carter. Although the accents aren’t particularly thick, we’re grateful for the English subtitles.

Overemphatic music stings slam in for every transitional scene. The overstatement is amusing and the orchestrations solid. It’s amusing to learn that the composer is none other than Andrew Lloyd Webber.

The disc producers Chris Barwick and Michael Brooke have laid on a number of new interviews of the kind that make their import product desirable even if we already own a domestic release. Lengthy interviews give us the views of director Frears and writer Neville Smith, as well as producer Michael Medwin, the editor, production designer and an actor. Stephen Frears’ 1967 short film The Burning is filmed in very good B&W and is said to be in Standard Def. Indicator’s booklet continues with an excellent range of articles on Gumshoe, old and new. The great critic Tom Milne explains the film’s game perfectly. He reasons that Eddie Ginley’s adversaries respond to and play along with his hardboiled patter, because they recognize and love the originals too.