The exclusive 4K Ultra-HD club welcomes a worthy new member, Joe Dante’s evergreen horror comedy (and Christmas delight) about a cute furry critter and its 2nd-generation horde of scaly, impish demons. These aren’t Gremlins from the Kremlin, but homegrown domestic terrorist monsters, and Dante contrasts their killer antics with a sentimental parody of small town America. No CGI … You will believe that the animatronic rascals can multiply like rabbits, break dance, and run amuck! 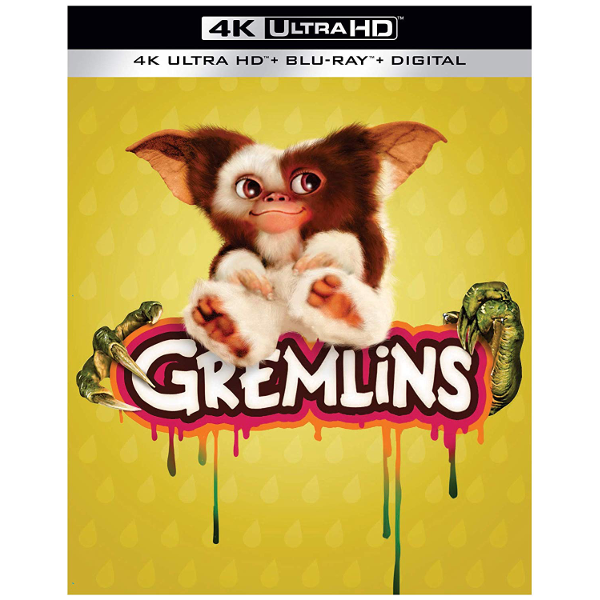 Yes! Here’s an excellent candidate for the leap upward to 4K Ultra HD! As anarchic as ever, Chris Columbus & Joe Dante’s Gremlins is a classic film masquerading as just another ’80s teen comedy. By now everyone is familiar with the tale of the furry Chinese Mogwai, a creature that comes with a strict set of rules we know were made to be broken. Faster than you can say Pandora’s Box, an idealized Christmas holiday is invaded by an onslaught of reptilian demons — the mischievous-murderous Gremlins of legend.

An absolute master of movie monsterdom, Joe Dante should be in charge of Universal’s gallery of ‘heritage’ monster remakes. Back in 1984, he and Chris Columbus did what every red-blooded American monster movie fanatic ought to do — they invented their own monster mythos.

Stephen King nailed John Carpenter’s Halloween as an expression of the traditional ‘campfire horror tale.’ The narrative launch pad for Gremlins is the cautionary scare fable, like The Monkey’s Paw. A person is put to an ethical test, and when he fails, all Hell breaks loose. The twist here is that Columbus and Dante don’t sweat the moral mechanics, and instead exploit the idea’s abundant potential for absurdity. We’re eager for the Mogwai to get wet and be fed after midnight, to see chaos loosed on the movie screen. It’s a horror picture, yet Delightful.

This might be director Joe Dante’s biggest success, and the movie that cemented his personal style. His ‘anarchy’ isn’t completely scattershot, as with films that followed in the wake of 1980’s Airplane!   Although movie in-jokes abound, each possible reference is attuned to tap filmgoer memories. When the first Gremlins are seen uncurling their sticky ears, the visual reminds us of the seed pods of Invasion of the Body Snatchers. Dante cuts immediately to a reaction shot of our young hero that’s a perfect match for a shot of Kevin McCarthy. It’s not a standard hommage or recognition effect, but something more instinctual — ‘We know this. We’ve been here before, under sinister circumstances.’

We’re in snowy Kingston Falls, a happy burg presided over by a hipster disc jockey Rockin’ Ricky Rialto (Don Steele). Nice-guy bank clerk Billy Peltzer (Zach Galligan) names his new furry Mogwai pet ‘Gizmo.’ Billy and young Kate Beringer (Phoebe Cates) don’t realize the danger until they’re forced to fight an army of midget monsters. Kingston Falls is yet another of Joe Dante’s Everytowns, a cultural composite existing only in movie nostalgia and baby-boomer TV shows. Both Kingston Falls and the story are crafted from bits of It’s a Wonderful Life, The Blob and The Wizard of Oz. With his hilariously defective kitchen ‘conveniences,’ inventor Randall Peltzer (folksy Hoyt Axton) is clearly a refugee from Disney’s gentle ‘absent minded professor’ farces. As Mrs. Peltzer, Frances Lee McCain plays a marvelous straight-faced Buster Keaton to runaway coffeemakers and orange-juicers that destroy her kitchen. The neighbor kid (Corey Feldman, later of Dante’s The ‘Burbs) is given a haircut to resemble one of the Corcoran children that frequented creative Disney pictures like The Shaggy Dog. The Gremlins’ modus operandi taps directly into vintage monster movie lore, combined with a comic streak borrowed from classic Looney Tunes cartoon shorts. The puppet tricks used to animate Gizmo and his demonic offspring are enchanting … it’s like Howdy Doody or Soupy Sales gone mad, or madder. The cute Mogwai sings, pouts and curls its ears like a cuddly teddy bear, all thanks to the clever animatronic puppetry of Chris Walas’ crew. When the reptilian creatures emerge from the Alien-ish egg pods, Dante gives us a brief clip from the old Invasion of the Body Snatchers, playing on Billy’s TV set next to scenes from It’s a Wonderful Life. The anarchic tone reaches its peak when the fast-multiplying Gremlins decide to party all night, dressing up and misbehaving like manic cartoon characters — while murdering people, of course. Hordes of Gremlins stage a barroom brawl and go wild in a movie theater, singing along with clips from Snow White and the Seven Dwarfs. The joke here (at the obvious expense of a hefty licensing fee) is that everybody, but everybody loves Disney’s Snow White.

Director Dante maximizes the impact of his acting veterans and is uncommonly sensitive with his younger performers. Corey Feldman’s admiration of Gizmo is as tender as anything in a Disney picture. Zach Galligan’s Billy is a little slow on the uptake but definitely not a stooge, while the charming Phoebe Cates (Fast Times at Ridgemont High) fits nicely into the insanity when she attempts to tend bar for a rowdy, randy pack of Gremlins. The movie shifts tone smoothly between Dante’s nostalgia-satire, earnest cutesy scenes, suspenseful anticipation, and all-out anarchy. Dante has always had a knack for avoiding pretension. Beyond the sage observation that we live in a Mad, Mad, Mad, Fun World, the underlying social significance on view is a big Zero.

Gremlins’ more grotesque thrills generated enthusiastic word-of-mouth — and also a bit of controversy from parents expecting a re-run of E.T.– style sweetness and light. With store shelves stocked with furry Gizmo stuffed toys, the film’s marketing had a special appeal for young audiences. Media flak over the film’s mayhem and murders helped inaugurate the PG-13 rating category. But Joe Dante’s comedic approach to horror as consistent with his previous successes The Howling and The Twilight Zone: The Movie. The werewolf show proved that horror and comedy can definitely reinforce one other: when victims were torn to pieces to the background accompaniment of “Who’s Afraid of the Big Bad Wolf,” we laughed and recoiled at the same time. Although Dante is never mean-spirited, he’s more than willing to make us nervous, eagerly pushing his gags into ‘ick’ territory when logic indicates. Gutsy homemaker Mrs. Peltzer defends her kitchen with everything she’s got: knives, bug spray and a Gremlin-scrambling blender. Audiences screamed and cheered when Mrs. Peltzer traps a Gremlin in a microwave oven and gives it the works: POP! SPLAT!It’s straight from the Betty Crocker School of home defense.

Dante saves his sharpest sting of cinematic disquiet for a much-discussed macabre Christmas story scene, told by Phoebe Cates’s Kate. An anticipated belly-laugh suddenly turns into a grim little moment worthy of the black humorist Charles Addams. It was received with gasps in the screening I attended. I cannot envision a film studio of today allowing this kind of a tonal interruption to make it to the final cut. ‘What are you trying to do, upset people?’  Gremlins has people slaughtered by snowplows, thrown through high windows and mangled by nasty little demons, but please, nothing morbid. Horror fans cued to Dante’s taste watch the scene of Miss Deagle ascending the stairs on her little electric chair, and immediately think of a supremely sick joke in William Castle’s Homicidal.

In one of his audio comments Dante mentions a showdown with the studio, which had the same play-safe attitude. They objected to two ‘iffy’ scenes, and asked Dante to choose between Kate’s macabre Christmas story, or another scene in which Judge Reinhold is discovered locked in the bank vault. Joe kept the Downer Christmas Story.

The film’s most original gag uses an old film reference as well. Gizmo, a seemingly infantile puppy-type critter, shows interest in an old movie playing on Billy’s TV. The film is To Please A Lady, where Clark Gable looks more than a little silly racing midget cars. Sure enough, when Gizmo later races to the rescue in a Barbie toy convertible, he has a mental thought-flashback to the Gable picture, with Barbara Stanwyck telling him how virile he is!  It’s as if Godzilla had a thought-flashback, comparing himself to King Kong. The conceptual silliness of the joke always gets a big laugh. It works just as well as the scene in E.T., in which the drunken Elliot channels John Wayne kissing Maureen O’Hara in The Quiet Man.

I watched this being painted. Go Rocco Gioffre!

Seen on a full 4K monitor, the picture pops more strongly than it did in 99% of theatrical screenings — the scan pulls more detail and ‘atmosphere’ out of the film than one would think possible. The added visual and audio detail allows us to examine the clever effects and scan for gags and references we might have missed on earlier viewings. Gremlinsof course has no computer-generated effects. Since most of the fantasy material was filmed live on a set with puppets and mechanical rigs, there are few optical dupes beyond fades and dissolves, and those are so clean they’re difficult to detect.

Jerry Goldsmith’s delightful score helps maintain the farcical tone, in case any particular gag scores as too much of a gross-out. The main ‘circusy’ theme should have been adopted by fun-fair carousels.

The disc extras date from earlier special editions. Joe Dante contributes to two separate commentaries. On the first he hosts Phoebe Cates, Zach Galligan, Dick Miller and Howie Mandel; on the second producer Michael Finnell and Special Effects master Chris Walas join Dante with recollections of the filming. We’re told that Chris Columbus’ original script was a much more violent horror story. Instead of giving birth to the monsters, Gizmo transformed into the murderous Gremlin leader ‘Stripe.’ In early drafts poor mom ended up decapitated. Dante and Columbus instead make the resilient Peltzers a loving, harmonious and family unit, that’s not afraid to fight back against them rascally demons.

Two trailers and a Gremlins 2: The New Batch trailer are present along with galleries of photos and storyboards. An amusing making-of featurette is something I remember showing on the old “Z” Channel back when the film was new. Dante provides additional commentary for a group of deleted scenes that flesh out the secondary characters. The deleted material apparently represents only a fraction of footage that Dante trimmed while whittling Gremlins into its final shape.

Every couple of years we hear about a revival or remake of Joe Dante’s Explorers, the wonderful fantasy about junior high schoolers that fly an amusement park capsule into outer space. I hope something happens, just to get Paramount off its duff for a Blu-ray of the original show. So many genre favorites have hit Blu-ray this year, that anything seems possible.