From the director of the beloved Local Hero: ‘Pure Simple Joy’ is an apt way to describe this deceptively meek, completely endearing Scottish film with a universal theme about adolescence and the reality of teen love. John Hughes’ teen pix do not hold a candle to the innocent charm found here. The gawky yet boundlessly optimistic Gregory falls head over heels for the teenaged wonder girl of his dreams… his only problem is that she’s light years ahead of him in terms of maturity. But the female social system takes on the problem in what must be the most gentle (make that Utopian) view of high school ever. Writer-director Bill Forsythe struck independent hit gold. 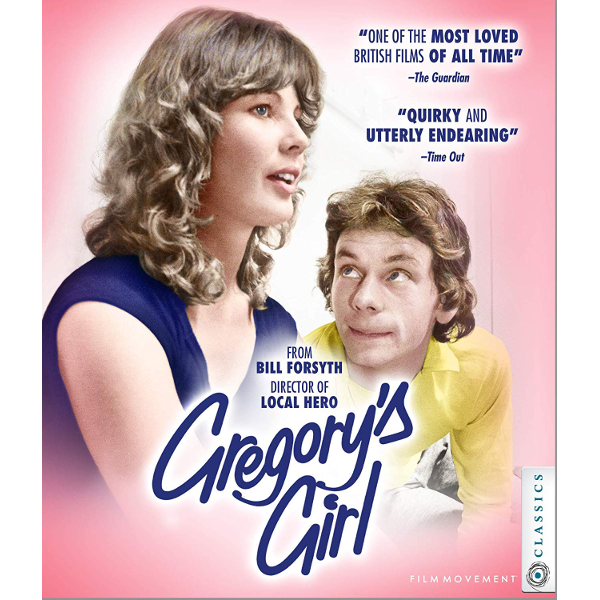 Unassuming and cute without being dumb, Gregory’s Girl was a wonderful surprise in 1981, when American youth comedies were edging into the crass territory of titles like The Hollywood Knights and Porky’s. Simple and sweet, the tale of young Gregory hit a nerve of truth in both the UK and America, Championed by Roger Ebert on TV’s Sneak Previews, and it became an art house hit for the quirky Scottish director Bill Forsyth.

Lanky and awkward Gregory Underwood (Gordon John Sinclair) has grown five inches in one year and is simply hopeless at soccer. Even the teachers make fun of him, but he’s blissfully oblivious to his eccentric pubescence. He’s smitten by the self-possessed Dorothy (Dee Hepburn), a mature and assertive beauty who has won a slot on the school’s losing soccer team by hard reasoning with the school’s coach. The boys at this school are an unorganized and mildly sex-obsessed lot. Gregory has a Dobie Gillis attitude but zero experience even knowing what to say to a girl. A genuine sweet soul, he needs coaching from his ten-year-old sister Madeline (Allison Forster) for the date he clumsily arranges with the girl of his dreams. Dorothy is simply out of his league, but Gregory’s date works out fine, in, shall we say, a roundabout way. We know writer-director Bill Forsyth best for his hilarious, droll and original Local Hero, and his knowing, respectful and forgiving approach to human weakness carries through all of his films. His even stranger Comfort and Joy is a hoot in its own way — an unhappy disc jockey tries to patch up a relationship while refereeing a weirdly gentle gang war between rival ice cream truck companies. Savant caught Comfort and Joy and Gregory’s Girl not in the theater but on L.A.’s old “Z” Channel, a proto 1970s-’80s cable service that showed a preponderance of interesting rarities, including the uncut five-hour Das Boot TV series, and the ultra-long snooze-fest version of Heaven’s Gate. When they’d air something like these two Forsyth movies or Claude Chabrol’s Nada, we’d tune in out of the blue and more often than not receive a pleasant surprise. (Actually, the “Z” Channel helped me adjust to fatherhood in an almost Bill Forsythe way: locked in the house for the first time minding infants day and night, it was a life-saver when walking a baby to sleep at 3 a.m..)

Gregory’s Girl is as basic as films get, and simply follows the gangly Gregory through a few days of mild romantic torment. The film’s charm is in its conception of kids as curious and coltish, but basically sweet. Forsyth’s little story doesn’t impose social theories about the state of Scottish school kids. The situation is in fact, practically Utopian, a high school environment free of intimidation, racial tension, or outright terror. A slightly thick but cheerful guy like Gregory would be meat for the grinder in the high school I came from, and that was back in the relatively sane 1960s. My boys went to decent schools in the ’90s here, and they said they still had to watch their backs. The benign Gregory’s Girl takes place in an alternate universe, apart from the docu-real horrors of something like Jonathan Kaplan’s excellent Over the Edge, where American kids turn anti-social because their own community treats them as an unwelcome nuisance. The setting of Gregory’s Girl is Cumbernauld, a progressive ‘New Town’ planned community that appears to have plenty of parks and open spaces where kids can roam free. The peaceful climate allows Forsyth to concentrate his little drama on Gregory’s little heartthrob for the graceful Dorothy, Miss soccer ace. He’s just not quite mature enough to fully relate to people, yet the story doesn’t become a tale of humiliation and disgrace. Other boys Gregory’s age are equally hopeless, like the pair who want to run away to Caracus (sic) in South America because of the male/female ratio. Other boys have organized themselves around specific interests like cooking or photography, almost as a shield against understanding how to successfully socialize.

Gregory is a sweet goofball: his male teachers observe his odd, immature (read: imaginative and spirited) behaviors to share a hearty laugh. Of course, the point is that even the adult males seem barely housebroken as well. Gregory barely has a notion of what to do with a girl if and when one slows down long enough to be kissed; when he talks to Dorothy he’s like a six-year-old at play. Luckily, the girls are more mature. They have their acts together, and cooperate one with another to make things work out. Gregory’s ‘date’ turns out to be a clever con game that redirects his attentions to several other girls until he ends up with one that fancies him, the less radiant but warmly attractive Susan (Clare Grogan). She appreciates his honesty and simplicity, and frankly seems to value his company as a way to get in significant kissing practice. In their first evening date, they lie down in the park. But Gregory arranges that so that they can ‘dance’ with their hands, rocking out to the sky together. It’s innocent, daffy fun, the kind of unexplainable thing we might remember doing in our own childhood.

Gregory’s not even aware he’s been had, and in reality he’s not been had, but gently accommodated. It’s all totally okay: if we’ve learned anything it’s that he’s too young to know what he wants. By evening’s end he’s infatuated with a totally different lass, and fancies himself a success in romance. All is well.

Forsyth’s camerawork is totally without trickery, yet he throws in some nice visual touches, such as the person in a penguin mascot suit wandering lost through the school hallways. His writing links together odd running gags, like the photographic pursuit of saleable photos of the nurses who undress in sight of telephoto lenses at night. (By the way, the show opens up with a single Porky’s – like scene that might throw one off to the general tone of the film.) Relationships are sketched quickly. Gregory’s family setup is covered with a couple of endearing talks with his adorable little sister, and one fast scene in which Gregory’s father, a driving instructor, almost runs him down on the road. About the closest we get to a social tract is the mention that the family doesn’t see much of each other, and another bit about a ‘successful’ graduate whose ‘swell job’ is washing windows. There’s a sly ending joke, a visual counterpoint between the unattainable ‘Caracas 9000 miles’, and a jogging Dorothy, who clearly already has a life underway that may take her wherever she wants to go. Savant didn’t catch this personally. My wife pointed it out to me, which pretty much proves Forsyth’s basic premise about the sexes.

Gordon John Sinclair is completely charming as Gregory; if you’re already a fan of Local Hero, he’s got a small role in that as well. The rest of the youngsters on view are equally interesting, especially the girls, many of whom appear to sport fluffy hairstyles modeled on Farrah Fawcett or Olivia Newton-John. ← Clare Grogan, Gregory’s eventual ‘date’, would become the lead singer of a Scottish rock band called Altered Images. Heart-stopper Dee Hepburn is credited, at least in the IMDB, with only one more appearances in a film but recurring roles in two TV series.

Film Movement Classics’ Blu-ray of Gregory’s Girl is a new 2K digital restoration that blows away MGM’s old 2001 DVD, as it should. Color values and sharpness are excellent, sweeping away memories of old TV copies where it looked as if it were filmed in 16mm. Colin Tully’s soundtrack frequently seques into a likable theme on a saxophone.

Back when the DVD came out, we learned that the soundtrack we originally heard on Gregory’s Girl had been completely re-voiced for America, for clarity’s sake — the same actors toning down their Scottish accents. The original track allows the Scottish kids to speak naturally, and their accent and argot is just strange enough so that they’re hard to follow. Both tracks are included here along with English subtitles. I recommend the original track with the subs. The dub job is good, but the replacement voices are much more ‘on mike’ and Gregory’s voice is much higher.

A French dub track is also included, for the purpose of …. I have no idea, unless FM seeks to distribute in French Canada. Film Movement adds a battery of extras. Mark Kermode hosts a commentary track with Bill Forsyth, who is analytical and candid about his show — at one point he opines that it’s too slow (which seems very wrong to me). Forsyth returns for two video interviews, one about Gregory’s Girl and one covering his entire early career. And actress-singer Clare Grogan takes the interview chair for her own memories of the show.

Jonathan Murray’s essay in the illustrated insert booklet clues us in to the ‘New Town’ setting of Bill Forsyth’s movie, and also marvels at Forsyth’s pleasingly non-standard narrative pattern, hop-scotching between major and minor characters, and ignoring the traditional shape of ‘school life’ movies. Not only does the show not climax in a big game or similar event, but Murray points out that we don’t even know if the soccer team will be successful with Dorothy aboard.

The trailer included is a new promo construction. The original trailer simply lifted a minute or so from the hilariously simple scene where Gregory and Susan dance in the park by lying down and pawing the air with their hands. The great moment captures perfectly the way even a maladroit can charm the right female, if he just relaxes and behaves as he normally would – no matter what silly thing he’s into. We smile through the entire film because we remember our own ‘not-ready-to-commingle-with-the-opposite-sex’ teen experiences. You smile watching these moments. It reminds this writer of how even at age fifteen I’d answer a girl’s invitation to come over to her house and ? … by showing up with a stack of old MAD magazines. I remember numerous proto- dates with girls with more advanced ideas of how to spend the evening. I have a feeling that the real sexual revolution will occur when men accept the fact that, in general terms, many girls and women seem born with better social instincts than their less mature male counterparts.