Military ensemble pictures work well when the excitement is all about the job and working under pressure: Charlton Heston, Stacy Keach, Ned Beatty and even David Carradine are excellent in this credible story about a near-impossible rescue of submariners trapped 1400 feet below. It’s a solid Navy disaster scenario, unusually authentic and realistic — until the dramatists require actor Ronny Cox to act like an emotional idiot. Those U.K. disc producers do it justice with some excellent extras, including a piece with a Navy specialist who worked with the rescue craft seen in the movie… and who later became a well-known film historian, author and film series organizer. 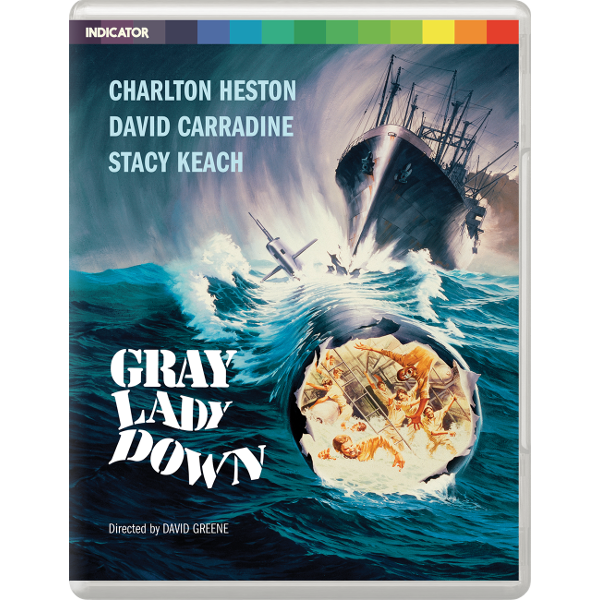 By 1978 this kind of movie almost wasn’t being made any more, a non-combat drama about valiant service in the peacetime military. Producer Walter Mirisch had singlehandedly kept Allied Artists going in the 1950s, and with his brothers ran the 1960s’ most successful film company helping directors like John Sturges, Billy Wilder, Robert Wise and Norman Jewison produce expensive, often progressive entertainment. Mirisch continued to produce his own movies, scoring a multiple Oscar win with In the Heat of the Night. The ’70s didn’t slow his pace down either.

1978’s Gray Lady Down is a handsomely produced tale from a book that fictionalized an undersea rescue, with a new experimental Navy submersible called a DSRV. Mirisch had just had a hit with a dramatized account of the WW2 battle of Midway (also just released from Powerhouse Indicator) intercutting 35-year-old war footage with an all-star cast. Also wooing audiences was a liberal dose of the Sensurround process first used on Mark Robson’s Earthquake. Mirisch knew the value of good relations with the armed services as far back as 1952’s Flat Top, an amazingly economical aircraft carrier tale that was cobbled together from much the same exact vintage film as Midway.

The Navy must have deemed Gray Lady Down as the answer to their dreams for good publicity for budget appropriations. The Deep Submergence Rescue Vehicle (DSRV) program was expensive and complicated, but also something that ought to funded, if we really expect sailors to man a fleet of peacekeeping submarines.

The show is a straight action-jeopardy piece with an excellent cast, but dulled somewhat by a few too-conventional dramatic elements.

Atom submarine Captain Paul Blanchard (Charlton Heston) is cruising back to port on his last tour of duty before being promoted; Commander David Samuelson (Ronny Cox) will be taking over. But they’re struck by a Norwegian cargo ship. The entire aft section of the sub is flooded, drowning dozens of sailors; the sub sinks past its rated depth but doesn’t implode. It lodges on a canyon wall at 1,400 feet. Blanchard dashes about seeing that the injured are tended to, and keeping up morale; Samuelson falls apart, blaming Blanchard and showing a defeatist attitude. They pray that one crucial bulkhead hatchway doesn’t burst under the pressure; they also worry that underwater rockslides could block access to the rescue hatch, or tilt the sub into a position that makes rescue impossible.

A massive rescue operation goes into effect. Admiral Michael Barnes (Charles Cioffi) authorizes rushing the DSRV from San Diego to the North Atlantic; it is carried aloft by a giant cargo plane. Rescue specialist Captain Hal Bennett (Stacy Keach) coordinates the rescue, which also utilizes a tiny experimental sub called the Snark, which is operated by a lone wolf Captain Don Gates (David Carradine) and his specialist assistant Mickey (Ned Beatty). The better part of a day later, the Neptune’s radio communications are out. The Snark goes down to make sure the hatch is clear, and to exchange messages with Blanchard by Morse code taps. It takes two trips, while more trapped submariners die of their injuries, and the unstable canyon wall threatens to tilt the Neptune so much, that a rescue will be impossible.

Gray Lady Down obtained military cooperation to spare, with exciting footage of real undersea craft preparing the rescues, and helicopters delivering personnel to the rescue ships above. The exceptional cast limits the damage of a screenplay that jams the drama with unflattering conflicts and characterizations. Although Charlton Heston stayed active and vital for almost three more decades, by this time he was ten years beyond his last major star triumph, Planet of the Apes. But Heston comes through 100%, proving his effortless skill at carrying most any storyline. The focus of authority for the rescuers above is the fine actor Stacy Keach, who lends his straight-arrow character unlimited credibility and dignity. After all of Keach’s shaggy dog roles (End of the Road, Fat City, The Squeeze) he surprises us by playing an establishment hero better than anybody.

This is the kind of movie that lives or dies by credibility — it’s primarily about professionals putting their experience and character to the test in a dire emergency. Unfortunately, the writers jam in two extreme sacrifices, perhaps because the market demands blood. One professional expert is a guy who sometimes flaunts orders. He commits the kind of unselfish, noble act that surely happens in real life, but has been done to death in movies. Another officer does almost the exact same thing. After behaving in an unbalanced way that resembles old-fashioned cowardice, he proves his mettle by laying down his life as well. In his case he instantly recognizes a ‘cold equation’ situation. He has only two choices — save himself momentarily so that everybody dies including him, or sacrifice himself to give his brothers a 50-50 chance.

David Carradine gets to fluff up his Bad Boy image, as a minisub expert with a ‘rebel outsider’ attitude. But he nevertheless proves himself equally dedicated as the more conventional officers around him. The fine actor Ronny Cox is saddled with yet another thankless role. Cox was the most disposable adventurer in Deliverance. After a full ten years of support work for various stars, he ended up playing mostly disagreeable bad guys — but brilliantly in RoboCop. Here the capable Mr. Cox is made to go through a whining, sniveling breakdown, acting like a spoiled high school jock told he can’t play in the big game. But of course, Navy training comes through when it comes time for his officer to Do The Right Thing.

Men that spend their lives performing hazardous duty under scrutiny from their peers tend to build up incredible defense mechanisms, like astronauts whose blood pressure isn’t affected even in the hairiest emergencies. Commander Samuelson’s histrionics bring back bad memories of the near-unwatchable space drama Marooned, from 1969. Three astronauts stuck up in orbit become total ninnies, losing their cool, blaming each other and even going nuts and threatening disaster. That’s why Apollo 13 impresses us so — that true-life story of astronauts averting near-certain disaster is inspiring. Gray Lady Down’s submarine rescue dilemma is much the same thing — watching the submariners ‘maintain an even strain’ despite terrible setbacks ought to be dramatic in itself.

The movie maintains technical clarity mostly without dumbing things down, although they could have skipped the moment where someone uses two models to show Stacy Keach, a DSRV expert, how a DSRV functions. This visual effects are good, but audiences that had just seen Star Wars six times likely found them a bit corny. The models are clearly models, and the visibility underwater is of course far too good. Only a few shots of sand on a submerged sub deck really fail the test — we expect to see a goldfish swim by. When CGI took over things improved, but also succumed to more cartoonish underwater action. Wanna make extreme action look ‘real?’  Just don’t let the camera do things a real camera in that situation couldn’t do. Favorite shot?  When some Navy parachutists (para-frogmen?) jump out of a plane, the camera zooms in to show one of them putting on his swim fins, while still a hundred feet in the air. That’s the kind of detail I would never think of.

The show provided small but decent roles for faces that would become more familiar later: Doran Harewood, Michael O’Keefe (his first feature) and David Clennon. It’s also a chance to see Christopher Reeve in a quiet role as a navy aide, six months before his instant stardom in Superman. As is typical for a service drama, the wives back home are seen only once or twice. Heston’s is played by Rosemary Forsyth, who had starred opposite him years before in the superior costume drama The War Lord. Helping to brighten the mix considerably is Ned Beatty, who is light but not goofy as the skilled pilot of the Snark mini-sub. It’s too bad that his character doesn’t share a scene with Ronny Cox’s character … one look between them could have asked, ‘Which of us got the worse deal back there on the Cahulawassee River?’

Director David Greene is best known for the little movie Godspell, but he had done 25 solid years of TV work along with the features The Shuttered Room and The People Next Door. The non-seaworthy direction given poor Ronny Cox was probably not Greene’s fault … but it lends the otherwise fine picture an awkward bit of dimestore dramatics.

Powerhouse Indicator’s Region B Blu-ray of Gray Lady Down is a fine encoding of this handsome thriller filmed in Panavision. The image looks terrific. The mono soundtrack flatters Jerry Fielding’s excellent film score, which supports the action and the dignity of the Navy without resorting to military film clichés.

Of special note is an unexpected featurette with author and film programmer Alan K. Rode of film noir expertise. Rode delivers a forty-minute talk about submarining, historical accidents and disasters, and various rescue systems like the DSRV. It turns out that in a career previous to film history work, Alan was a Navy specialist familiar with most of the hardware seen in this movie. He managed the upkeep on the DSRV and serving as an officer on its custom-built mother ship. It’s a fascinating memoir real Navy work that will charm fans of Navy lore. Alan’s Navy expertise also comes through on a fine commentary for the Viavision [Imprint] disc of the 1954 The Bridges at Toko-Ri.

PI’s special edition of Gray Lady Down packs one of their fat insert booklets, which invariably yield worthwhile contents. I didn’t get to preview the booklet, so see below for details.

The disc comes from the U.K. and is Region B locked. A few days ago we received a pub emailing announcing that Powerhouse Indicator is getting a U.S. + Canada distributor next year, which should end some Region-coding restrictions on their product.

One last, sort-of relevant note. A colleague from my days working on trailers, Richard A. Smith, headed up the Universal Publicity department in 1978. Once upon a time, studios threw real parties for below-the-line staff. For a gag reel Richard assembled a fake trailer complete with off-color jokes, that combined scenes from two of Universal’s current productions, Gray Lady Down and I Want to Hold Your Hand. The title of the fake movie: I Want to Hold Your Gray Lady Down. I can’t remember if the booming narration was by Percy Rodriguez (Jaws), or Don La Fontaine (everything raspy from the 1980s). Do a gag reel like that today, and you would likely find yourself looking for a job.