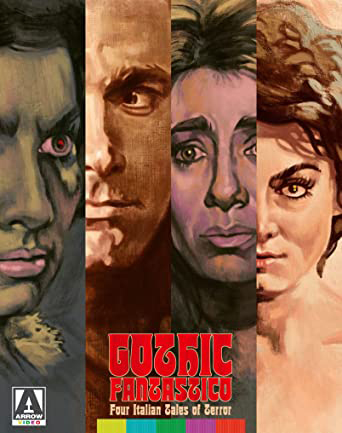 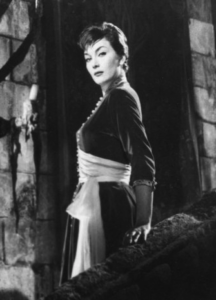 The success of 1957’s I Vampiri, a grimly beautiful fantasy directed by Riccardo Freda and Mario Bava, provoked an unexpected trend in the country known for neo-realism; Italian horror films began to embrace the classical romanticism of Rebecca over the modernistic shocks of Psycho. Elegant nightmares like Bava’s Black Sunday cast their spell and soon this new breed of gothics—united by sumptuous black and white photography—dominated movie theaters with tbeir come-hither promise of seductive spirits and strategically lit negligees.

A few of these thrillers were more brazen in their approach—flaunting their teasing nudity and blood-soaked denouements, exploitation fare like Atom Age Vampire and The Playgirls and the Vampire took aim at the raincoat crowd—both in Naples and 42nd street—causing more sober and unconventional productions to fall by the wayside. Enter Arrow Video with Gothic Fantastico: Four Italian Tales of Terror, a superbly produced new Blu ray set that rescues four of those distinctive films from oblivion. 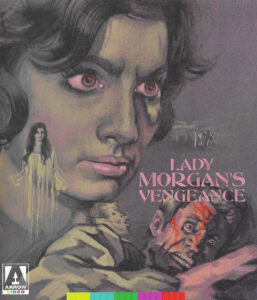 When Susan Blackhouse’s fiancé is lost at sea, the young heiress seeks solace in a hasty marriage to an aristocratic friend of the family, Harold Morgan. But there’s little solace to be had—Lady Morgan’s love nest turns out to be a snake pit, commandeered by Morgan and a pair of vipers who’ll do anything to get their hands on Susan’s inheritance, including her eventual murder. This ghoulish trio is played by Paul Muller as Harold, Erika Blanc as his conniving maid, and Gordon Mitchell as the butler—each sporting an unwholesome attitude and, when Susan’s back is turned, mean-girl sneers. Those surly expressions give way to shock when Susan comes back from the dead to have her own fun—played by dark-haired vamp Barbara Nelli, she makes for a very sultry poltergeist. 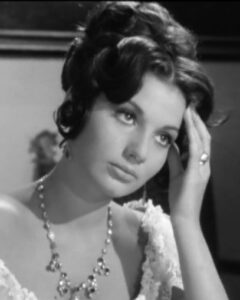 So far, so normal, avenging ghosts are a dime a dozen in gothics, but director Massimo Pupillo and screenwriter Giovanni Grimaldi have stranger things in mind than a garden variety haunting—Susan’s tormentors meet their own demise and come back to life, not as ghosts but hungry vampires.

Pupillo had a short run as a director but what’s there is cherce, especially the intriguing Terror-Creatures from Beyond the Grave starring Barbara Steele, and the preposterous The Bloody Pit of Horror with Mickey Hargitay as a torture-happy fetish object. Lady Morgan takes its cues from both these films, especially the dream-like atmosphere of Terror-Creatures, which was helped immeasurably by cinematographer Carlo di Palma, the artist responsible for Blow Up and a number of Woody Allen films including the luminous Radio Days.

The Blancheville Monster (Aka Horror) 1963 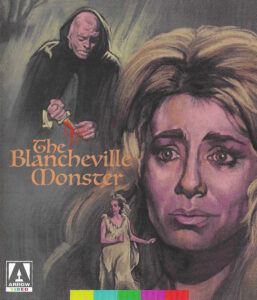 Alberto De Martino, like most busy Italian filmmakers of the 60’s, dabbled in a variety of genres—spaghetti westerns (Django Shoots First), mythological musclemen (Perseus Against the Monsters), and spy spoofs (Operation Kid Brother). De Martino’s real specialty was movie trends; whatever film was currently blowing up the box office, the director was sure to have a copycat in production. In the early ’60s he kept an eye on American drive-ins where Roger Corman was enjoying a winning streak—it was Corman’s success with his Poe films (along with Bava’s Black Sunday) that opened the vault door for 1963’s The Blancheville Monster. 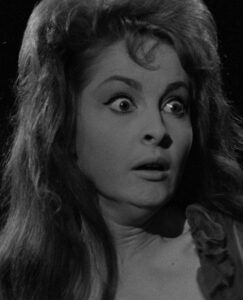 The Blancheville mansion is a gloomy structure ripe for a haunting, yet young Emilie De Blancheville can’t wait to be there; just freed from the university, she’s armed with a new boyfriend and a fearless disposition. She’ll need both because things have changed at the castle she abandoned four years ago—her father and his servants have died, leaving her cold-hearted brother Roderic to rule the roost. And the new domestics are frightfully undomesticated, a silent band of malcontents who tend to appear without warning—not only indifferent but actively hostile. And then there are those anguished howls coming from somewhere in the mansion, the sounds of a caged beast. But this monster is no stranger to Emilie, it’s her father, still alive but disfigured in a fire, and indisputably mad. 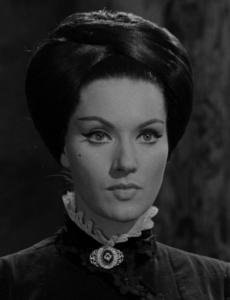 The Blancheville Monster has a prosaic but familiar storyline, like an oft-told bedtime story used to comfort a child, though De Martino himself characterized the movie as “a little film of no importance.” The director was being too hard on himself—this tidy “little” spook show is a perfectly fine nightcap for the more adventurous kids in the audience. And it boasts a nice fairytale quality thanks to cinematographer Alejandro Ulloa, a seasoned cameraman behind many a giallo and spaghetti western, with the cult favorite Horror Express headlining his list of achievements.

Emilie is played by Ombretta Colli, an over-achiever in her own right; she starred in a series of science fiction and sword and sandal films before a head spinning career move; in 1994 she became a Member of the European Parliament, and in June of 1999 she was elected as president of the Province of Milan.

A formidable woman is Ms. Colli, but it’s Helga Liné who takes precedence over The Blancheville Monster—unlike Colli, Liné was content with an actor’s life. She had a merry-go-round career, appearing in spaghetti westerns, giallos, and a couple of Paul Naschy’s monster-fests before gracing two of Pedro Almodóvar’s most delirious films, Labyrinth of Passion and Law of Desire. It’s difficult to reconcile her role as Miss Eleanore, the sinister housemaid of Blancheville Manor, with her imperious performances for Almodóvar, but such was her range—she leaves all the other Blancheville players in the dust. 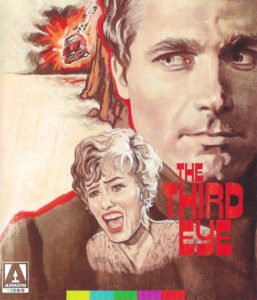 A jittery, sweat-stained riff on Psycho, The Third Eye details the breakdown of a madman named Mino Alberti, a wealthy count who moonlights as a taxidermist. An unsparing director as well as writer, Mino Guerrini saddles poor Alberti with a domineering mother in the parlor, a jealous maid in the laundry room, and a sizable number of hookers lounging by the waterfront. Somewhere in that crowd is Alberti’s fiancée Laura, and when he dares to announce that their marriage is imminent, mom and the maid decide to take matters in their own hands. Franco Nero plays Mino and Laura is played by Erika Blanc—the dashing Lancelot of Camelot meets the zombie-eyed goblin of The Devil’s Nightmare (with her 1000-yard stare, Blanc could look otherworldly without makeup.) 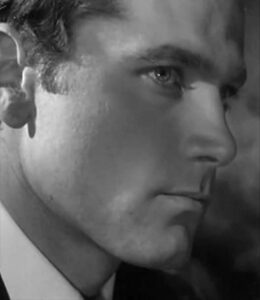 That bit of psychotronic casting lifts Guerrini’s already peculiar potboiler to new levels of crazy: Mino’s mother and Marta, the green-eyed housekeeper, hold impromptu meetings where they discuss, in the most polite terms, different scenarios in which Laura might lose her life—and Marta hops right to it—soon Laura and her car are careening over a cliff and into the Mediterranean. Alberti retrieves Laura’s body, brings her home and puts his taxidermy skills to use just as Laura’s twin sister arrives (Blanc doing double duty). Alberti’s psychosis shifts into overdrive while mom and Marta engage in a bloody showdown in the living room. Guerrini, perhaps without trying to, has arrived at a new kind of horror film; a gothic Hellzapoppin’.

Alessandro D’Eva—he photographed Ann-Margret’s The Tiger and the Pussycat—manages to keep his camera focused amid the chaos and the frenzied score by Francesco De Masi hits just the right histrionic note (Tarantino is a fan, he used De Masi’s music for Ecce Homo in Once Upon a Time in Hollywood.) 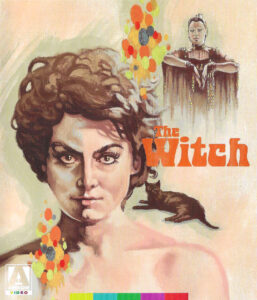 The film’s title is as deceptive as its plot line. As Sergio, a cagey Englishman adrift in another country, Richard Johnson discovers that “amore” has nothing to do with it: this supposedly well-traveled lothario is as lost as Brando’s middle-aged rake in Last Tango in Paris. And like Brando’s downfall in the Bertolucci film, Sergio’s own race to the bottom begins in an opulent ruin—a once stately manse where there waits a beautiful stranger played by Rosanna Schiaffino. Just moments after their meeting, Sergio and this cryptic beauty are copulating amid the squalor—the kind of erotic spectacle best described by Pauline Kael as “romance mixed with rot.” 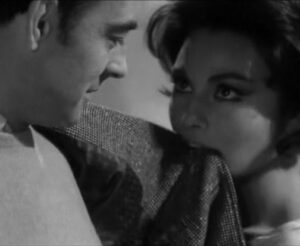 Cinematographer Leonida Barboni’s camera prowls just as seductively as Vittorio Storaro’s in Tango and the ponderous atmosphere engulfing Johnson and Schiaffino can be, as they say, cut with a knife. The mystery woman’s name is Aura—a Greek phrase meaning “soft breeze”, and she lives in this rundown Antiquarium with her mother Consuelo, a mascaraed crone as flirtatious as her daughter.

The old lady has invited Sergio to rehabilitate a dilapidated library but those mundane plans vanish when a disheveled figure wanders into frame—his name is Fabrizio, the former librarian, and he’s played by Gian Maria Volonté. Battle lines are drawn when Fabrizio claims the library—and Aura—as his own. And with Consuelo casting very strange glances at Sergio, this increasingly perverse roundelay takes on more sinister—not to mention supernatural—dimensions. 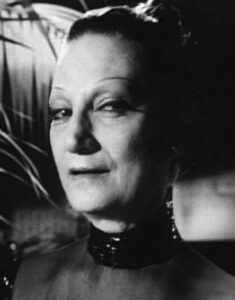 Damiano Damiani’s movie is a revelation, not only for Richard Johnson’s nuanced performance, but the disquieting performances of Schiaffino as one half of a double-headed hydra, and Sarah Ferrati as Consuelo, the scheming succubus disguised as Aura’s “mother.” Ferrati was best known for her work in the the theater, including a stunning performance in, appropriately, Medea (the story of Consuelo should be an opera). La Strega appears to be one of only two feature films she made during the course of her career yet her performance is a triumph of understated menace; she telegraphs depravity with but a furrowed brow—and she’s even more terrifying when she smiles.

Kudos to Arrow Video’s production squad; Gothic Fantastico shows a discerning approach that more home entertainment companies should take—these folks are serious about cinema. To show just how serious, they’ve gone the distance with the extras. Along with beautiful transfers of the films themselves, the supplements are highlighted by feature length commentaries, new interviews with the actors and directors (including Erika Blanc and Massimo Pupillo), and video essays from historians like Kat Ellinger and Keith Allison.

Inside the box case are a few extra goodies, including a movie poster and a booklet featuring essays on the films.

The box design itself is fine bit of craftwork, with new artwork by Colin Murdoch.

Here’s a detailed rundown of all the extras.