At least twenty fine actors and stars make Robert Altman’s period piece about a party in a big English country house into a gala occasion. The show is also a fascinating entree into a classed world of masters and servants. The drama of manners could also be described as a mystery who-dunnit. Either way, we’re floored by excellent work from a stellar cast. 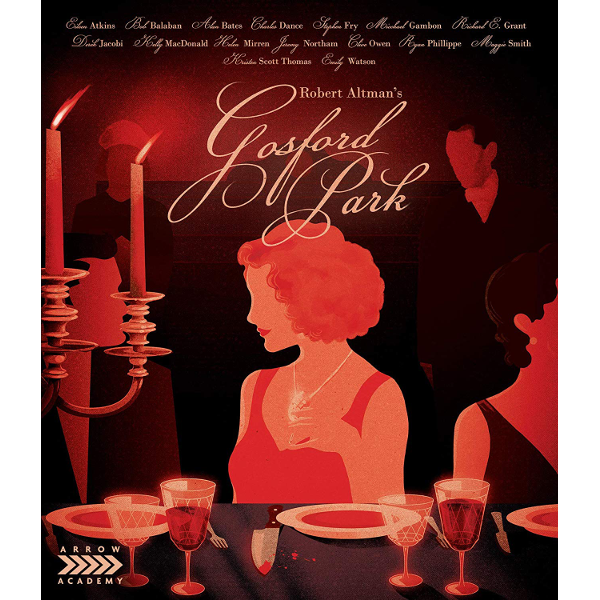 Gosford Park is an atypical Robert Altman movie in that it is not dominated by his personal style signature. It’s not as footloose as his dreamy shallow-focus visual romps from the 1970s. He gives his actors the usual leeway with their roles, and hands over control of much of the physical production to his hired experts — preferring to concentrate on performances over the details of life among the English gentry in the early 1930s.

Actor-writer Bob Balaban and Altman apparently cooked up the idea for Gosford Park, which was then drafted by actor-writer Julian Fellowes. Viewers will almost immediately recognize the similarities with Fellowes’ later long-running TV series Downton Abbey, which at one point was planned as a more direct spin-off. Gosford is a standalone drama about a long weekend and hunting party at an enormous country estate, attended by a select group of family and guests. That information should drop a flag right from the start, as the tale has plenty of common with Jean Renoir’s classic movie Rules of the Game, about another weekend hunting party among a more decadent cross-section of French swells and celebrities. As a murder occurs during the proceedings, we also wonder if Gosford will become a giant game of Clue. *

The events of the weekend sketch the shape of an complex social system of guests and servants. The landed gentry assert their privileges as if they were God’s law. The butlers, maids, cooks, porters, valets and chaffeurs working for them have their own hierarchy of servitude.

A parade of touring cars descends on a large estate on a rainy weekend. The imperious hosts William and Sylvia McCordle (Michael Gambon & Kristin Scott Tomas) have no social scheme except to resist various relatives and friends that wish William to invest in their businesses, etc.. One younger man wishes to gain an economic advantage by perhaps forming a relationship with the McCordles’ daughter, Isobel (Camilla Rutherford). Another young couple are viewed with disdain: he’s a reckless social climber and she’s considered much too plain and common. After making sure that their jewelry is carefully locked away, the more established older set amuses itself by judging who is worthy and who is not. The elderly Constance Trentham (Maggie Smith) is a vicious snob, yet insists that she’s nothing of the kind. Film and musical star Ivor Novello (Jeremy Northam) is along for the weekend and frequently entertains at the piano; the younger women are charmed but Constances behaves as if he’s a vulgar nuisance. Ivor has brought with him Morris Weissman (Bob Balaban), a Hollywood producer who wants to make a movie called ‘Charlie Chan in London.’ The talkative Weissman is always on the phone; he’s also barely tolerated.

The real interest happens ‘below stairs,’ where the highly organized servants of the house receive (as oppose to ‘welcome’) the valets and maids that have accompanied the party guests. The hierarchy below is even more rigid. Probert and Jennings (Derek Jacobi & Alan Bates) head the male staff, while Mrs. Wilson (Helen Mirren) is in charge of all of the female staff, except for the kitchen help, over which the head cook Mrs. Croft (Eileen Atkins) holds sway. Wilson and Croft are engaged in a long-running bitter feud, that’s a mystery to the rest of the staff. Butler George (Richard E. Grant) helps enforce an unspoken discipline among the servants. The ‘visiting’ servants try their best to fit in with the house rules; they’re referred to by the name of their master or mistress, not their own names. Constance’s inexperienced maid Mary Maceachran (Kelly Macdonald) learns about the rougher edges of servitude from the MCordle’s cynical maid Elsie (Emily Watson). Several servants conceal secrets. The easy-going, handsome valet Robert Parks (Clive Owen) has taken a less-prestigious job for a personal reason. And the valet of the American producer Weissmann, Henry Denton (Ryan Phillippe) attracts attention because he barely seems aware of what a valet does.

The weekend soon develops into a dense web of secrets and lies, misbehavior and just plain boorishness. The servants endure constant low-key abuse. The maids swoon over having a movie star in the house, but we also find out about love affairs past and ongoing, especially with the promiscuous lord of the house, William McCordle. A deeper mystery between Mrs. Wilson, Mrs. Croft and Robert Parks also relates specifically to McCordle. With the actors Helen Mirren, Eileen Atkins and Clive Owen in charge, this part of the story provides the film’s strongest material.

When the murder occurs the movie only partly becomes an Agatha Christie who-dunnit. The investigating constable (Stephen Fry) turns out to be a fool too impressed (intimidated) by the high-toned guests to do much investigating. He instead behaves more like a fan, ignoring important evidence uncovered by his subordinate. Justice is dealt out in other ways. The intolerably snobbish McCordle is taken down a few pegs, while her guests regard the murder primarily in terms of what it means to their personal futures. Below stairs, a two-way revenge is final but not really satisfying. A pretender is unmasked, but a maid who has lost her job for insubordination may have a better offer on way. A couple of people do figure out who committed the murder and why, but their actions are determined by the servant code, and an understanding of the general inequity in their lives.

That understanding explains why, when a career servant’s life is torn apart, there are no big public scenes — to have an emotional breakdown, the sufferer must first retire to a private space.

Gosford Park plunges us into a fascinating old-school world of rich folk vs. servants. Julian Fellowes’ take on this world was accepted and celebrated; unlike many other Altman films, this is a straight drama devoid of imposed satire. Yes, it does take a while to become familiar with the large cast of characters. Some of the younger guests are easy to confuse, what with three young men wanting favors or investments from their rich and influential host. It’s an insular world of privilege; the only reference to a wider political matter comes when McCordle says he won’t back some foreign investment scheme because the British Empire is finished, its manpower depleted by the losses of WW1.

The versatile Robert Altman could and did direct in a variety of styles, but the one he chose for his large-scale multi-character satires is not my favorite. In A Wedding but most pointedly in the later pictures Dr. T & the Women and A Prairie Home Companion he organized some scenes like a free-form pageant, letting multiple telephoto cameras observe scores of characters from afar. With all of the actors individually miked, scenes could be performed without the actors being able to play to the camera, or even knowing if they were on camera. Although what we got was fresh, Altman’s aim of directing by not directing had its limits — some actors responded by performing every moment as if it were a close-up. Not every movie is California Split with Elliott Gould and George Segal so in tune with their characters as to direct themselves in inspired improvisations.

Altman’s whole point with these directing notions was not to get in the way of great acting work. Gosford Park was filmed in many individual rooms, in real mansions and on constructed sets — in general his scenes had to be fragmented and inter-cut. He put the performances in the hands of his actors by miking them individually and keeping his two cameras moving. In this case giving the highly professional cast their heads is inspired. Once on the set, Altman didn’t even read the scene in advance, so it would seem fresh to him. He reportedly let his assistants and script supervisors worry about things like skipped lines and continuity.

The result is that we get the flavor of Altman’s taste and decisions without the constant nudge that an ‘auteur’ filter is present. With its English period setting, the only aspect of the story that seems Altmanesque is the large cast and naturalistic way people behave. There are plenty of master shots with overlapping dialogue, but the show doesn’t give the impression of free improvisation. With Altman and his editor giving shape to the final continuity, Gosford Park’s web of dramas, subplots and relationship details is actually quite exacting and precise. On a third viewing I caught numerous details that added color to sidebar jealousies and dalliances. Rather than jumping to the next Salient Plot Point, the film’s flow feels like Life being lived as we watch.

The enormous cast reportedly worked on the film without ‘star’ contracts, dedicating themselves to Altman’s known preference for ensemble drama. Now we know several actors that have proceeded to bigger careers, or at least prominent roles: I wasn’t aware of Clive Owen in 2001, but have since enjoyed him in Croupier, Children of Men, and Duplicity. Kelly Macdonald surprised us with a terrific Texas accent for No Country for Old Men. Emily Watson I did know, from Breaking the Waves. But not knowing being familiar with the career arc of the great Alan Bates, on my first viewing I didn’t believe it was him until I saw his name in the credits. That, I guess is the definition of ensemble acting.

* When Gosford Park was angling for Academy honors, its publicists circulated an impressive perk to critics, a full-on mystery murder board game, with playing cards for most of the key characters, with the actors’ images on them.

Arrow Academy USA’s Blu-ray of Gosford Park is from a new 4K scan commissioned by the disc company. The picture is rich and detailed, making the show’s intricate production design all the more impressive — none of the minutiae is show-offy, yet we feel like we’re inside the world.

Arrow’s producers collect relevant extras new and old. The late director’s input is here on an archived commentary, and also that of Julian Fellowes and the producer David Levy. A new critical commentary is offered by Geoff Andrews and David Thompson. Of the new individual video interviews, executive producer Jane Barclay is a standout, as her eclectic experience shows how post- studio era producing companies use track records and personal trust to gather the money to put projects together.

The deleted scenes are interesting, as are Altman’s reasons for not using them. Also included in the menu are some older, very good making-of featurettes.