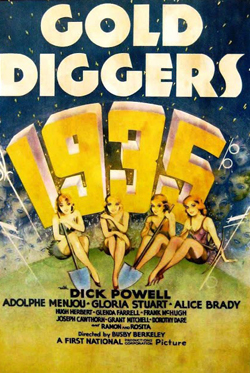 The  fourth in the popular Gold Diggers musicals, Gold Diggers of 1935 is glossier than previous entries and, since it was produced nearer to the depression’s end, pointedly free of the heavy dramaturgy that made the earlier entries so compelling. It’s a strong entry nonetheless with Busby Berkeley taking over both direction chores and, not for nothing, coming up with the ne plus ultra of Berkeley extravaganzas, Lullaby of Broadway. Starring the inveterate charmer Dick Powell and the Invisible Man’s girlfriend, Gloria Stuart.