Daniel Clowes’ comics creation receives an A-Plus film adaptation through the directorial filter of Terry Zwigoff. The show has more going for it than the bleak alienation of disaffected quasi- gen-Xers — the script offers a depth of character revealing the insecure hopes and fears behind all the insulting attitudes and behaviors. It’s caustic, funny and also strongly affecting. 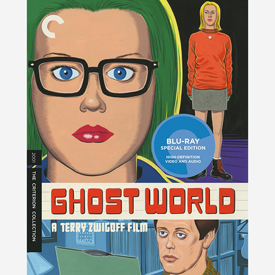 Enid: “I think only stupid people have good relationships.”

It was a surprise in 2001 for MGM to emerge with this almost unclassifiable graphic comix adaptation about the summer adventures of a pair of disaffected high school graduates. Enid and Rebecca can’t make up their minds whether to continue idly criticizing the terminal gauche-ness of everything and everybody they encounter; or to expend the effort to in some way fit into a world they see as unappetizing and demoralizing. The tentative, uneasy Ghost World brings back the vague unarticulated despair of Robert Crumb’s Zap comics: people living lives of unfulfilled promise, muted passions, and disenchantment with the ugliness of the world and its values. (Whew!) This makes perfect sense, coming from the director of a docu on Robert Crumb, and a writer adapting his own comic series with roots that lead straight to the late ’60s underground maestro. As a comedy, Ghost World is laugh-out-loud funny, maintaining a subtle tone that makes sense of Enid and Rebecca’s twisted world. It’s also quite sweet and sympathetic at heart. I haven’t seen it in years, and it holds up better than I thought it would. 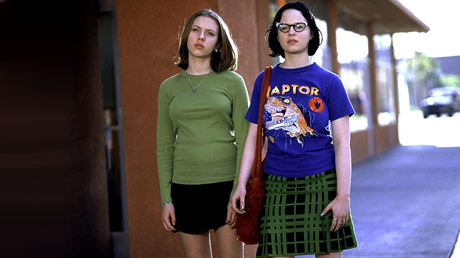 Enid (Thora Birch of American Beauty) and Rebecca (Scarlett Johansson of The Man Who Wasn’t There) graduate from High School with a thinly disguised contempt for everyone around them: simpering classmates, Enid’s meek father (Bob Balaban), the hatefully hip guys that trash their I-refuse-to-be-stylish style of dress. Forced to take a summer art class to get her diploma, Enid must suffer the clueless insults of ditzy art instructor Roberta (Illeana Douglas), who slights her work because it lacks a conventionally positive social context. Rebecca takes a menial job, determined to move into an apartment of her own, but Enid’s inability to take things seriously keeps her unemployed and unhappy. She drifts into a friendship with record collector Seymour (Steve Buscemi), a Robert Crumb- like loner whose arcane interests and lack of social skills type him as a loser when it comes to women. At first attracted by Seymour’s sheer awkwardness, Enid begins to appreciate him as a fellow nonconformist. She takes him on as a Cupid project: she’ll find him a woman, because she “doesn’t want to live in a world where a nice guy like him can’t get a date.” Ghost World performs several magic acts at once. It creates a convincing world of strip malls and soulless consumerism (our world) without being unduly crass or obvious. Into this landscape it places two very recognizable teens: hyper-aware, not overly attractive, and allergic to any form of social conformism. Avoiding sentimental tricks, the show allows us to care about them, while they learn that it’s okay to care about other people too.

Enid and Rebecca consider graduation an escape from Zombie Land, into an urban ‘ghost world’ of meaningless stores and fast food outlets. The only self-expression that comes to mind (beyond Enid’s diary-like cartoon drawings) is to play evil pranks on those they deem losers, in order to feel superior. One such prank backfires and brings Seymour into their lives, causing a jealous rift, but opening Enid’s mind to the possibility of a worthwhile human existence beyond her tiny personal orbit.

The film is a comedy, yet it has an edge because so many movies about ‘out of step’ teens turn into psycho thrillers. A case in point is Frank and Eleanor Perry’s 1969 Last Summer, with early work from Barbara Hershey, Catherine Burns, Richard Thomas and Bruce Davison. The kids also use a dating service, but for malicious aims, and the story ends with murder and a rape. Ghost World doesn’t take its maladjustments to such extremes.

That Enid should be alienated from her world is obvious, given the colorful (but by no means exaggerated) freaks that hang out at the coffee shop and the 7-11. Nothing is off limits for her scorn; even the local adult bookstore is just another freak show with fools to be jeered at. Seymour’s similar disenchantment, and the power of his blues records, gives Enid the idea that there may indeed be things worth exploring that she’s unaware of. Thora Birch reportedly gained weight to better resemble the heroine of Daniel Clowes original comic. She and Scarlett Johansson create characters we haven’t seen before — purposely dorky, awkwardly aiming for ‘cool’, they’re immediately endearing. The loveable, nerdy Seymour brings out all of Steve Buscemi’s talents, as a guy convinced he’ll never attract anyone. Seymour makes an excellent stab at normalcy with the sincere Dana (Stacey Travis), but we know he’ll blow it in the end. In this case, he has the help of the barely-stable eighteen-year-old Enid.

Big credit needs to be given Clowes and Zwigoff, as their humanistic attitude refuses to put the blame on straight characters like Dana and Enid’s dad. Dana is just the kind of supportive and cheerful beacon who could help Seymour construct a better self-image. Even the thoughtless art teacher is an innocent victim of P.C. attitudes, and sincerely does her best to help Enid.

Much is made of the teenage ‘Retreat to The Room.’ In Enid’s case she lolls around among her significant things, wondering if she’s ready to go out into the real world — note the World of Henry Orient poster on her wall, a film about the girlish problems of an era far removed from this one. Being human, Enid makes mistakes. At one point she finds herself alone, having momentarily alienated Rebecca, and facing a life with a stepmom (Teri Garr) she fears and loathes. She unwisely reaches out to Seymour an adult context, which of course messes up everything, mostly for poor Seymour. Ghost World gets its details right with merciless accuracy: the fast-food blandness, the grating hostility of many young adults, the mangled mess of pop music on view. Graduation is marred by awful rap music. Seymour’s beloved blues guitarist is shoved aside by a band called ‘Blueshammer.’ In this commercialized stew of mediocrity, a sensitive ear can be carried away by one of Seymour’s old 78-rpm records. Any alternative to the emotion-dulled sameness is to be cherished, as with the Indian Bollywood musical number that Enid rocks out to in the film’s opening. She’s desperate for anything with a subversive, exotic streak, that she can use to define and distinguish herself. Enid will try anything — when she dons a rubber batgirl mask, it makes no difference to her that she’s wearing what would be commonly identified as an adult sex accessory. This is not a ‘cruel story of youth’ but a funny, compassionate peek into human psychology, a great movie all around.

The Criterion Collection’s Blu-ray of Ghost World is a stunning 4K transfer that’s brighter and more colorful than the old DVD, making the picture really pop. I knew the show was carefully composed but forgot how attractive are its images. The 5.1 music track is also a kick … it’s nice to hear a youth oriented film not wallpapered with current cues. 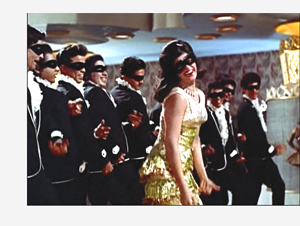 New to the title is a commentary with Zwigoff and Clowes, joined by their producer. Even better, Thora Birch, Scarlett Johansson and Illeana Douglas sit in for new interviews. All three are excited to remember the show, and ‘where they were at’ when it was made. They’re also willing to psychoanalyze the characters to some degree. From the old disc comes a selection of deleted scenes. A must-see is the uncut “Jaan Pehechaan Ho” musical number seen in the titles of Ghost World, from the 1965 Bollywood film Gunnam. It’s a little longer at both ends than the film clip on the old DVD. It’s even more unbelievable as a standalone music video. The weird choreography is Shindig Meets Busby Berkeley: a female lead in a golden dress shimmies and jerks frenetically, surrounded by a pack of thin male dancers, all wearing bandit masks. It’s like Feuiillade’s Les Vampires updated and on a nightclub tear. The energy expended in the silly dancing is enough to raise the roof — it’s like fifty Beach Party dance numbers rolled together, only better. Not shown in the title sequence version are angles featuring the grinning lead singer, who looks like a demented Indian version of John Waters. I’m surprised the song didn’t get radio air play, it’s so brain-numbingly infectious. In this edition the music video is given a commentary written by David Cairns and Stephen C. Horne, and read in a slightly giggly ethnic accent by Roshini Dubey.

An illustrated pamphlet contains an essay by Howard Hampton, Zwigoff’s notes on the film’s soundtrack and some excerpts from Daniel Clowes’ colorful comic. Clowes also contributes a new cover for the release.

Note: At the finish Enid is walking down a street, with the sign of a donut shop in the background, and then a mini mall with a Radio Shack. She then looks across the street to see the significant action at the Out of Service bus stop. That corner with the signage is in Hollywood, where Vine Street meets Rossmore as it crosses Melrose Blvd. It’s about four blocks from Savant Central, on the edge of Larchmont. The bus stop across the street is ‘cheated,’ for what Enid is really looking at is Christ the King Church . . . the place I was married so many years ago. It’s always been fun living in a town where so many movies have been filmed: just think, YOU can stand where Thora Birch made history.