Ladies and Gentlemen, we have a precedent! Barbet Schroeder’s documentary gets up close and personal with a narcissistic dictator consumed by his own ego. Idi Amin rants and raves incoherently and demands to be the center of all attention while taking his country down a road to ruin. This is Africa in 1973, where Uganda has been converted into ‘The Idi Amin Reality Show’ — and where a minion in disfavor might be fed to the crocodiles. 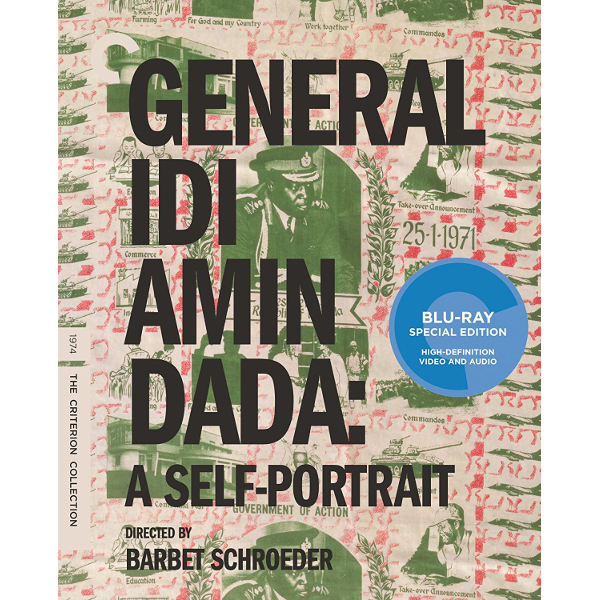 Criterion’s decision to bump Barbet Schroeder’s daring 1970s documentary to Blu-ray at this particular time cannot be an accident. It’s still a fine picture by an incredibly courageous director. Before Schroeder flew to Uganda to make a film about a new dictator, he first made sure that his last will and testament was in order. But any viewer in 2017 will immediately see parallels to today’s political chaos in General Idi Amin Dada: A Self-Portrait. Uncomfortably vivid parallels. 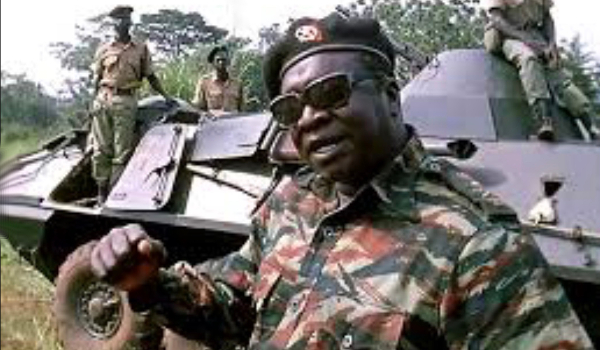 The appalling dictator Idi Amin of Uganda is shown up close and personal in a filmic portrait that Barbet Schroeder has decided is self-directed — Amin is on screen all the time, and decides where he will go and what will be said. His intention is surely to spread his ‘wisdom’, but the film instead reveals his megalomania and utter monstrousness.

The deftly filmed 16mm show simply follows General Idi Amin from one staged event to the next, and listens to what he has to say. In a way it’s a bit like Portrait of Jason, except that the subject could at any time order the filmmakers’ execution. After a short recap of conditions in Uganda, 1974, we see the general-turned president doing what benevolent, absolutist dictators do — he reviews troops and meets and greets with the public in orchestrated events. Amin holds ‘meetings’ with cowed cabinet ministers and a group of doctors, all of whom listen politely to his insane gibberish. They have good reason to listen – Idi Amin would eventually kill as many as 300,000 of his own people on the most vague of personal whims. We hear Amin’s desire to destroy Israel from his own mouth, and aren’t surprised when he complains that English, French and American policy makers won’t return his bizarre and hateful telegrams. We see a telegram he wrote to Waldheim of West Germany, extolling the virtues of Adolf Hitler.

Good documentaries take us across space and time to places where we can’t go, and serious documentarian
Barbet Schroeder (Koko: A Talking Gorilla) and his cameraman Néstor Almendros risked their lives in bringing back this chilling portrait of the dictator Amin. Although we know now that anything goes, anywhere, in 1975 it was difficult to accept the fact that a man this ignorant and brutish could become leader of anything. Speaking English, Amin cannot put together a sentence that makes any sense. He has a creepy habit of laughing at his own jokes, which are not funny. He’s so uncomfortably goonish that he resembles a racist parody, the kind Savant gripes about in English movies like Live and Let Die or Brittania Hospital. When the British approved of the coup that put Amin in power, they underestimated him as well — thinking him a harmless buffoon.

But in no way is Idi Amin a joke, despite his clowning. He takes us on a Disneyland-style jungle cruise among hippos, elephants and crocodiles, to which he waves as if they were personal friends. The crocs might be, as the preferred method of disposing of his many victims was to toss them in the river above a dam. We are told that there were so many, the reptiles couldn’t eat them all. The remains clogged the turbines, causing occasional power outages in Entebbe. . .

Amin is an ex-boxer, and in one of his infantile speeches he talks about delivering a knockout to his enemies. His regime is of course by, for and about Amin. He considers himself to have psychic insights into what is good for his people, and has decided that he cannot be killed because he already knows the day and date of his own death. He browbeats his lickspittle ministers in a hectoring ‘briefing,’ telling them that 1) everybody must love him, 2) they must act independently, and 3) anybody who displeases him will be sorry. Schroeder freezes the film to tell us that not two weeks later, one of the ministers being called on the carpet was found dead in the river. 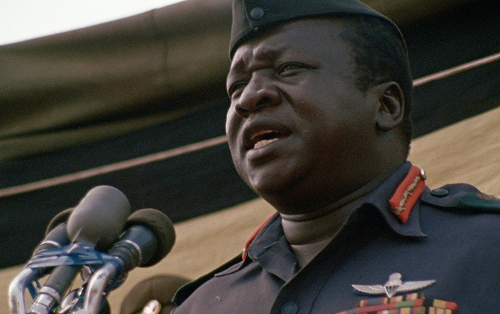 Just when we had decided that Conrad’s Heart of Darkness is the creation of a European racist, the reality of Idi Amin reminds us that those third world countries which have developed only militarily, can have a feral savagery that ‘civilized’ countries have forgotten. Amin tells his ministers that the local chiefs’ main duty is to ‘separate the good from the bad and denounce the bad,’ which conjures up visions of a countrywide vigilante roundup of more citizens to be killed. We see a firing-squad execution whose victims are tossed into the back of a truck like cordwood. That may have been a relatively dignified way to die. 300,000 in eight years adds up to 103 executions a day, every day throughout Amin’s entire reign.

Amin’s first act upon taking power was to expel the Asian and Indian merchants that held his commercial
economy together . . . they had ninety days to abandon their businesses and get out. In what amounts to a Dilbert moment, Amin brags for a minute straight about encouraging women in business, but finally admits that he knows of only four or five female managers. Perhaps six, if one counts the beautiful woman he appointed to replace the minister thrown to the crocodiles.

Amin’s idea of a foreign policy is equally insane. He talks about welcoming Black September, the Palestinian terrorists that murdered the Israeli Olympic team in 1972. Two years before he was humiliated by an Israeli raid that freed the passengers of a hijacked plane at Entebbe, Amin states on camera that he would welcome hijacked Israeli airplanes. When asked how he plans to reconquer the Golan Heights for Palestine, Amin answers by staging some pitiful wargames for Schroeder’s camera, with tanks, helicopters and jets supporting ground troops. His paratroops drill for the camera by jumping off a porch, and sliding down a playground slide. When asked why he’s boasting about a non-existent Ugandan navy, Amin just laughs. 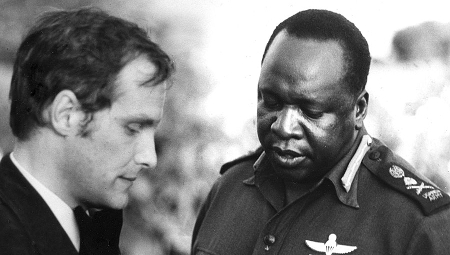 Schroeder lets Amin condemn himself out of his own mouth, just as Kevin Brownlow and Andrew Mollo had done with the actual neo-Nazis in their earlier It Happened Here. After the film’s premiere, Amin forced Schroeder to censor offending passages by threatening to hold French citizens in Uganda hostage. Schroeder complied, but restored the cuts after Amin’s fall in 1979. One voiceover line not restored stated that monsters like Amin are a product of colonial rule, a final statement that would hardly have been reassuring.

General Idi Amin Dada is just one of several Barbet Schroeder movies made in extreme circumstances. His Mediterranean drug & dissipation epic More is an underground classic, and his bizarre search for a mind-expanding legendary paradise in New Guinea, The Valley (Obscured by Clouds) is one of the weirder films ever made, shot on location amid primitive tribes. Koko: A Talking Gorilla remains a milestone in linguistics and behavorial science studies.

Barbet Schroeder is not a filmmaker easily intimidated. I was at the Cannon Group in 1987 when he made his excellent Charles Bukowski movie, Barfly. Informed a few days before filming that Cannon was cancelling the show, Schroeder entered Yoram Globus’s office and threatened to hurt himself. His bluff (?) worked, and the show went on. In some interviews Schroeder downplayed the danger of making a movie about Idi Amin, claiming that his life was never in danger because Amin considered the film a puff piece. Just the same, those crocodiles and firing squads are nothing to sniff at. Animated, cheerful and psychotic, Amin doesn’t seem to realize that he’s revealing his true horrid self with each interview. 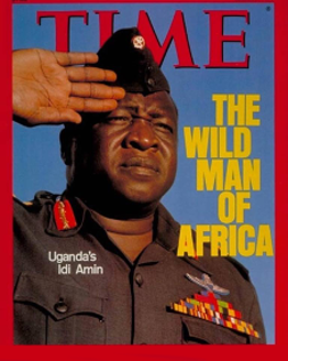 The Criterion Collection’s Blu-ray of General Idi Amin Dada: A Self-Portrait is a new scan from the 16mm Ektachrome original. In various extras Schroeder laments his technical inadequacy, but we see no evidence of that. The picture looks much better than ever, and certainly better than the blow-up 35mm prints that circulated forty years ago.

Criterion producer Jason Altman has built on the earlier DVD from 2002. We get two substantial Barbet Schroeder interviews. In a talk repeated from 2001 Schroeder details the circumstances of the filming and airs his overall ambivalence about its effect — Amin’s announcement that Uganda would put out the welcome mat for hijackers may have initiated the bloody 1976 ‘Raid on Entebbe’ hijacking incident. Schroeder explains why he credits Amin as being the film’s director: Amin dictated everything to be photographed, and at one point even shouts, ‘film that helicopter!’ Director Schroeder returned recently for a follow-up interview, adding to his thoughts about Amin, who died while living in luxury in Saudi Arabia, in 2003.

The first disc had an annotated timeline of the country’s history, but this time around Criterion gives us a video piece from author Andrew Rice about the history of Uganda and its dictators. It’s a helpful guide, showing how England left the country in a fractured state and with a disorganized group of governmental organizations … and an army. The final touch is a well-turned set of liner notes by J. Hoberman, who adds a political dig of his own.

Yes, it’s true, the self-aggrandizing, fake-hale & hearty, ‘It’s all about me’ style of Idi Amin is uncomfortably familiar now. Amin would reportedly eliminate anybody around him that did not owe their existence to his rule, to his largesse. This is one of the best think-pieces ever filmed about the excesses and abuses of political power.