Welcome to the West, long after the frontier has closed. Allison Anders’ marvelous drama of a three-girl family is a big step for indie cinema, a highly entertaining examination of women’s aspirations and frustrations out on the non-glamorous working class fringe. Writer-director Anders wastes no time with a terrific cast — Brooke Adams, Ione Skye and Fairuza Balk’s family lacks a father, and ‘men who walk’ becomes the central issue in their lives. Filmed in a gloriously believable New Mexico desert. 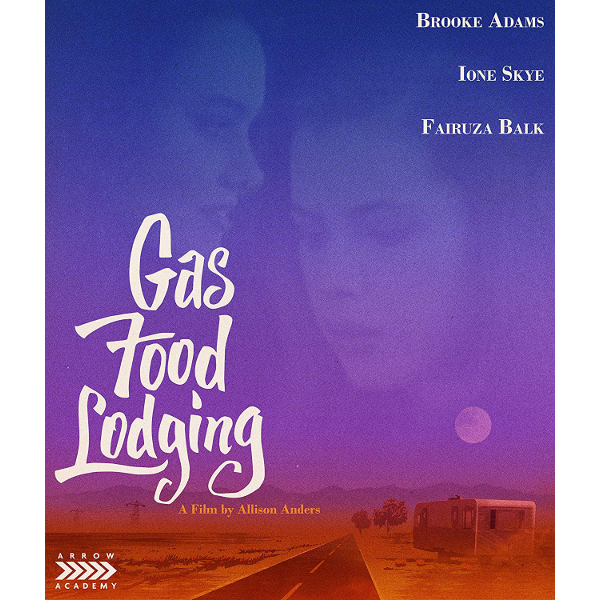 The extras for this disc discuss the plight of women film directors, their uphill struggle, etc. It would seem to me that the solution to the problem would be more pictures like 1992’s Gas, Food Lodging. UCLA film student and writing awards winner Allison Anders began with the notable but barely-screened movie Border Radio. In what must have been a perfect storm of indie film production, she was presented with the opportunity to rewrite a novel about desperation in a fatherless broken family, and to cast and direct it as she saw fit. The three actresses at the core of this tiny but compelling drama generate great chemistry. When the movie ends, we want it to continue.

I had for awhile confused, or perhaps conflated Gas, Food Lodging with another movie about young women trying to get along, Mystic Pizza. The two pictures couldn’t be more different. Anders’ film is anything but a Rom-com about women looking for Mr. Right. Despite being set in a backwater desert town, neither is it a despairing tale of women stuck in a depressing environment. Laramie New Mexico is barely more than a truck stop, but it does have schools and a Spanish-language theater in addition to the roadside diner where toils Nora Evans (Brooke Adams), a waitress with two teenaged daughters, Trudi (Ione Skye) and Shade (Fairuza Balk). Abandoned by her husband when the girls were babies, Nora has struggled all this time, and now the situation is becoming untenable — Trudi is both uncontrollable and terribly unhappy, while Shade is just beginning to feel the pangs of wanting a boyfriend. The failed-family atmosphere is daunting. To set a good example, Nora avoids becoming involved with the random men that would like to sleep with her. After some terrible experiences, Trudi has fallen into a pattern of inadequacy that compels her to offer sex to everyone she dates. This has given her a bad rep among her peers, a pack of abusive loiterers. The younger Shade fantasizes a big romance with the handsome Darius (Donovan Leitch), who she doesn’t realize is gay — or she simply isn’t clear on the concept. While trying to track down her long-gone father, Shade sets Nora up with a blind date with Raymond (Chris Mulkey), who she doesn’t realize is both married and one of her mother’s ex-lovers. But there is hope: Trudi falls head over heels for Dank (Robert Knepper) a rock expert/spelunker who values her. And Shade makes contact with an older man (James Brolin) who holds the secret to her broken family. The real secret to Gas, Food Lodging is that male-oriented solutions won’t fix these basic female problems: life is apparently always going to be in flux. This is not a predictable story about rural depression, with adults that disappoint and kids that drop out of school to fall prey to crime or drugs. Ms. Anders’ story just sees life for the untethered modern woman as an ongoing struggle.

Our main character turns out to be Fairuza Balk’s Shade, who desperately wants to help her mother and is frustrated by her sister’s self-destructive obstinacy. Feeling sexually inadequate, the young teen tries to compensate by remaking herself as a fox to seduce her friend Darius, whose faux-philosophical ramblings impress her. Shade is the one who quests, and who finds answers.

Ms. Anders does wonders with what ought to be a film student conceit: Shade habituates a Spanish language movie house that shows Golden-era Latin American romantic soap operas starring a long-suffering, fictitious Elvia Rivero (Nina Belanger). The recreated Mexican (or Argentinian?) films deal in pure, basic emotions that appeal to a romance-starved teen living in a culture of cruel peers and social disavantage. Elvia Romero’s laments provide emotional release, even though Shade doesn’t understand what’s being said; she sits alone in the theater and cries.

I wonder if Shade’s afternoon movie breaks are an homage to Barbara Loden’s wandering heroine Wanda, who also drifts by a Spanish neighborhood theater somewhere out in the sticks. The disc extras hint that Loden’s film has importance for Ms. Anders.

The Spanish-language romanticism thread leads to a marvelous segment in which Shade befriends a sweet Mexican-American boy, Javier (Jacob Vargas). Her white-bread friends shun the ‘cholos’ as dirty criminals, but Shade discovers that Javier is delightfully different, with a deaf-mute mother who loves to dance (choreographer Sissy Boyd). And Javier speaks Spanish to her so gently…

At first we think that the contrary, foul-mouthed Trudi may be incorrigible, but she is simply going through problems of her own, and refusing to accept guidance. Despite her enviable good looks Trudi has deep self-worth issues. She knows that she invites abuse in her relationships, a pattern that began after she was victimized in a sexual encounter. Trudi howls that she’s repeated left humiliated and desolate because men ‘just walk away.’ Yet she has a fierce independence that’s admirable.

Gas, Food Lodging is an involving human drama, not a feminist tract. A possible ‘lesson’ isn’t immediately apparent. There are plenty of men in the lives of these three women, but none is a fantasy rescuer, a magic male that will make all things right. Hopefully Trudi will learn that all men aren’t scum like some of the local boys. Dank may fall short of his promise, but the only salvation for a woman is to find some core of independence, emotional and otherwise. Shade appears to reconcile her fantasy life with reality, and to accept that one can’t simply glue an old family back together again. And Nora learns to allow herself to live as well.

The feminist viewpoint overturns assumptions of an earlier age — women can overcome their personal mistakes. Nora realizes that her girls are going to have lives independent of her control. Shade is inexperienced, but even she has gone so far as to obtain birth control, just out of principle. It’s the wild Trudi that throws caution to the winds. Director Anders has a fine eye for the reality of desert living, neither idealizing the environment or playing up the very un-fashionable trailer park where the Evans women must live. Gas, Food Lodging breaks up the tedium with stylistic detours, like the very good imitations of B&W Latin movies, complete with romantic music, that so enchant Shade. The love-denied Trudi finally finds rapture inside a cave lit by ultraviolet light, that becomes a colorful fairyland. For Nora there may be no escape from waitressing or the emotional toll exacted by Trudi. The resilient woman doesn’t need a fantasy escape, just a break now and then for her peace of mind.

With almost any other treatment we wouldn’t accept the drop-dead beautiful Ms’s Skye and Balk as woebegone teens stuck in no-exit trailer park lives. As a reviewer not into fashion values, I don’t know if their arresting wardrobes are too expensive for credibility. The two teens are incandescent. Skye’s Trudi may learn that there is a way to live without being angry and spiteful. Shade is heartbreaking — when she smiles we see the ten year-old girl is still present inside her. Gas, Food Lodging captures the potential in people, without having to verbalize the thought that Everyone Has Value. Allison Anders pressed onward to some more unusual, arresting dramas populated by interesting actors — Mi vida loca, Grace of My Heart — but it’s criminal that this film didn’t land her a glut of writing- producing- directing offers. They say that it’s the Year of the Woman. Anders has kept busy in television but there would certainly seem to be room for her again in features or long-form cable series. And hey, I just realized that she’s a Trailers from Hell Guru, too.

Arrow Academy USA’s Blu-ray of Gas, Food Lodging is a stunning encoding of this beautifully-shot independent feature. The three actresses go through a range of looks and styles, and the photography doesn’t make them seem too glamorous in the modest, dusty surroundings. If clothes are character, Anders flatters her characters. Skye’s Trudi dresses to kill but never comes off as a tramp. Even when Balk’s Shade affects a humorously debasing ‘Olivia Newton John’ look to seduce Darius, she seems credible — her sad walk home is 100% endearing. If the gorgeous Brooke Adams must take a mother role, this is an ideal outcome, as even a waitresses’ dress and apron can’t hurt her looks. Arrow’s extras are few but substantial. An older documentary gives a half-dozen woman directors the opportunity to grind axes and vent opinions about the plight of woman directors in Hollywood — their arguments are sound. Penny Marshall harps on the lack of opportunity, which seems odd considering her background, and talks as if she should judge which women get the work. Gale Ann Hurd and others bring up the interesting point that women that do make it big don’t shepherd other women, and that women don’t band together, which I remember Lee Grant often addressed in speeches.

A new piece gives us Josh Olson interviewing Allison Anders in her study, with a big poster of Wanda on the wall beyond. She talks candidly about her background, career and films, and even explains the odd punctuation for her title in the opening credits.

A photo album extra is particularly gratifying, as the shots of cast and crew make this look like a particularly warm and mellow filming set. An attractive illustrated insert booklet has nothing about the movie, but instead a short story inspired by it.