Take a trip into the depths of German silent film in a documentary that links expressionist cinema with dark political undercurrents. Director Rüdiger Suchsland’s essay adapts a famous & worthy but slightly outdated book, yet is an excellent overview of movies in the Weimar period. 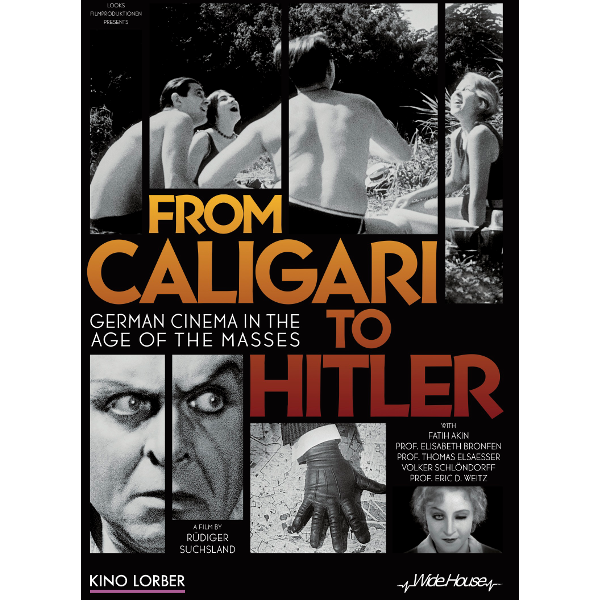 I’ve always sought out good documentaries about films or groups of films that weren’t commonly available. Back in 1980 Kevin Brownlow’s miniseries about silent Hollywood amazed us because we had seen so few of the pictures involved. Because the source films are so impressive, almost any piece on German silent pictures makes for good entertainment. This two-hour 2014 study has excellent film excerpts, and not all of them are taken from the same ten familiar titles.

Rüdiger Suchsland’s From Caligari to Hitler: German Cinema in the Age of the Masses is a film version of Siegfried Kracauer’s highly influential 1947 book, one of the first texts to become required reading in college film courses. By the 1970s a new wave of film criticism had just taken off, but professors were assigning key works written as far back as the 1920s. All docus on German silents seem to begin with The Cabinet of Dr. Caligari and this is no exception. We’re quickly introduced to the Weimar Republic, a time of economic chaos but also personal and artistic freedom. Suchland uses images that reinforce Kracauer’s thesis that the films foretell the evil of the Nazi era. Black-gloved criminals and fantasy villains rule. Reality is warped by false ideologies, people lose their way in materialist desires and the ‘masses’ become more passive to authority.

The expressionist years offer more than sufficient opportunities to illustrate this notion. Suchland of course shows the near-demonic mad genius Dr. Mabuse using hypnosis to wreak havoc on the stock market, etc. But we also see a lot of Schranker from Fritz Lang’s “M”, a ‘sane’ master criminal who commands all of the underworld. “M” came after the expressionist period, yet Suchland makes much of Schranker’s black-gloved arm to represent Nazi power seizing authority over Germany’s heart and soul.

Much of the show is devoted to a more generalized overview of the silent era, showing the way the films expressed the vitality and energy of the period as well as the darker themes of social upheaval. Thus we of course see plenty of Walter Ruttmann’s Berlin: Symphony of a Great City, the incredible impressionist docu of a day in Weimar’s capital. All the major Fritz Lang films are covered, but we also see costume pictures, historical epics and comedies. Suchland reminds us that the ‘exotic’ Germany of Sternberg’s The Blue Angel is a set-decorators illusion, and uses the period’s bizarre horror films as evidence of ‘flaws in the German soul.’ Expressing the opposite extreme is the Sidomak-Wilder-Ulmer People on Sunday, a fine picture about a carefree picnic in Wannsee. That film’s non-actor female leads are posited as representatives of the cheerful, hopeful side of Weimar.

We see a great deal of familiar film footage, albeit with a more analytical narration backing. Suchsland introduces Marlene Dietrich, and puts forward a discussion of the directors that are still remembered and those that have become obscure. Most of the famous ones emigrated to America in the ’20s, or were forced out of Germany in 1933. Some of the lesser-known clips will be news to viewers that think they’ve seen it all. I’ve read about Paul Czinner and Elisabeth Bergner, but a clip from their Miss Else is phenomenal. It’s a dark social drama that wouldn’t have been made in Hollywood: a family in severe economic straits entreats their daughter to become the mistress of a wealthy man.

As an overview of the period From Caligari to Hitler is quite good, but its thesis doesn’t reach beyond the limits of the original book by Kracauer, a journalist and literature/cinema critic who left Germany when the Nazis came in. The 1947 book was something new — people weren’t writing about film or film history for wide consumption. Kracauer’s thesis insists that the films are evidence of the dark psychological shadow falling over Germany, that led to the Nazi era. Seventy years later, the components of Kracauer’s argument have mostly fallen by the wayside. Newer thought about the way history works shows that fascism, totalitarianism and authoritarianism can spring up most anywhere. Sure, Germans may have a dark soul in their literature and art, but it didn’t fall prey to some sort of political Original Sin.

The thesis reminds me of the unfair German stereotype of conformity-worship . . . after WW1, a common nonsense bias against Germans claimed that they started wars because they loved uniforms, and were obsessed about giving and following orders. Of course the themes and moods found in movies will relate to the politics of any time, especially if you carefully choose the movies. But German screenwriters didn’t gaze into crystal balls. They made movies about social upheaval because it was already happening all around them, and their horror monsters came from the misery and guilt of the war they had just lost. The fantasy pulp mastermind characters were common to movies from several countries.

The German cinema was big-business oriented, just like Hollywood. If Robert Wiene’s The Cabinet of Dr. Caligari influenced the direction of German cinema, it’s because it was a worldwide hit that brought in a lot of money. Creepy fantasies became a German house specialty. When Kracauer wrote about Caligari he hadn’t seen it in many years, and his claims about the intentions of its makers have been superseded by newer research. From Caligari to Hitler was once the only widely-read book about the subject. My guess is that Kracauer’s publishers loved his chosen book title mainly for the way it would increase sales. ‘Old Movies that Created Hitler’ is going to sell better than ‘Old Movies Shown in Museums.’

Variety’s film review points out that Siegfried Kracauer’s limited access to better research leads him to ignore the German movies before the Weimar Republic. The author may not have been aware of Otto Rippert’s 1916 Homunculus, which presents a better Hitler analogy than the ones discussed here. It’s a sci-fi serial fantasy about a superhuman artificial man without a soul. He eventually manipulates the working class to revolt against authority.

In general terms, Suchsland’s From Caligari to Hitler is an excellent introduction to its subject. The fact that it presents a somewhat dated thesis isn’t necessarily bad in a classroom situation, where discussion can illuminate its strengths and weaknesses. Kino Lorber’s DVD of From Caligari to Hitler: German Cinema in the Age of the Masses is an fine encoding of this film-related docu. Many of its film clips come straight from the Wilhelm-Murnau-Stiftung archive, and are of excellent quality. Director Suchsland breaks up the pattern with frequent multi-screen still montages. Pieces of movie scores are heard, most notably that of Metropolis, but the new music by Henrik Albrecht and Michael Hartmann is just as good. Combined with the director’s expressive narration, the music sets a rich, contemplative tone to accompany the old movie clips.

Also in 2014 Rüdiger Suchsland made a companion docu on German silents, the TV movie Caligari- Wie der Horror ins Kino kam (Caligari – How the Horror in Film Came to Be). It’s available as an extra on the Kino Classics Blu-ray of The Cabinet of Dr. Caligari.

The film is mostly in German but has a considerable number of English language interviews. The English subtitles provided translate only the German language sections, which isn’t helpful to hearing-challenged viewers. A trailer is the one extra.