Hard-media home video is making a comeback, and Kino Lorber shows its faith in the medium with an extravagant collection of its entire silent holdings of the Fritz Lang library. Mythical heroes, sacrificing heroines, criminal madmen and uncontrolled super-science are his themes; it’s a paranoid’s view of the first half of the 20th Century, expressed with fantastic innovations that literally re-write the rules of cinema. 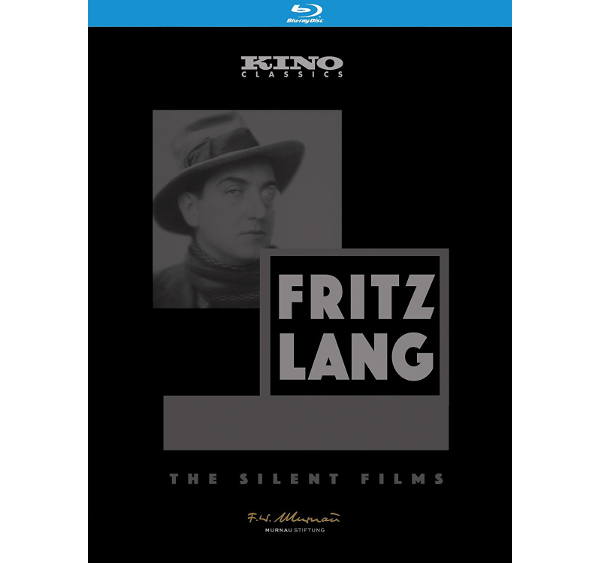 Kino Lorber has been a happy home for many marvelous discs of silent German classics. Thanks to their ongoing relationship with the Friedrich Wilhelm Murnau Stiftung, we’ve seen older, crude copies of great pictures replaced one after another by greatly improved, authoritative restorations. The FWMS’s exacting 2001 restoration of the incomplete Metropolis used documentation and sheet music to plot out the film’s many missing sections. The work was so precise, that when an almost complete copy of the film was later discovered in Argentina, much of the new footage dropped right into the cutting pattern already established.

Almost every Lang silent is now a different, more complete movie than it was just a decade or two ago. Way back in film school we had no idea that the 16mm film prints we were shown had often been cobbled together by a museum or a single collector, from limited sources. Many lacked complete story continuity, with perhaps a cryptic added opening disclaimer that said little about what was missing. We read descriptions of impressive scenes by Siegfried Kracauer and Arthur Knight, which just weren’t present in our school screenings.

Most of the 16mm versions were cut-downs and several had been thoroughly abridged; others were barely more than remnants. Even when presented on laserdisc in the 1990s, The Spiders didn’t play like the exciting adventure depicted in the literature; it barely played like a movie. Many problems of this kind have been corrected, thanks to missing scenes collected from archives around the world.

Because of its popularity, the refurbishing of Metropolis is the most dramatic improvement. I saw the ‘old’ version for the first time at UCLA in 1973 or 1974, when Fritz Lang himself came to talk to us. He was probably not thrilled by the reception given him, as at that time we’d seen few of his movies and couldn’t formulate intelligent questions. He sat with several of us on a stone bench outside Melnitz Hall, and explained that he really couldn’t see very well any more. When we asked him about 2001: A Space Odyssey, he said it was terrific, even though he couldn’t see it clearly. We later learned that by 1966 or so he was beginning to be functionally blind. To our surprise, Lang told us that he no longer believed that Metropolis was a good movie. We disagreed — even the 80-minute shaky copy then available was dazzling, and we told him so. I guess he was far beyond the need to lecture film students about the grandiose original picture he’d created almost fifty years before. About the same time I found a copy of Lotte Eisner’s book on Lang, and practically memorized it. Except for a missing silent film or two, I’ve now seen everything Lang filmed. But back then it was all new. I was impressed to read Eisner’s appendices, where we learned that Metropolis had been drastically cut after its first release.

If I didn’t want to keep my Eisner book intact, I’d go through and highlight all of the once-missing, now restored scenes in Fritz Lang pictures. The un-cut ending has been restored to 1943’s Hangmen Also Die!, but the incredible radical ending to his 1946 Cloak and Dagger is likely gone forever because it was never part of a release. Eisner didn’t live to see the fabulous restorations by the FWMS, and indeed died just as Home Video appeared. She was 31 when Metropolis was released. Although she doesn’t describe the uncut original, it would seem likely that she saw it because in early in 1927 she had become one of the first female German film critics. It’s interesting to read Eisner’s descriptions of scenes in that movie, Spies and Woman in the Moon, that she says are lost, and that have been subsequently restored.

I’ve previously reviewed most of the discs presented here, with the exception of the very early silents. They’re more demanding, as Fritz Lang was still learning his craft and only beginning to assert his lifelong obsession with cinematic language. Also included is The Plague in Florence, a very loose adaptation of Poe’s The Masque of the Red Death, which Lang wrote but did not direct. Occasional good moments to the contrary, the earliest silents are for purists and serious students; the Lang we know with his deep-felt mystical/moral themes really begins with Destiny. Lang is so firmly associated with the development of cinema that his work can be approached from any angle. Pure enjoyment is more than enough reason to watch. He’s so formal that film theorists have a field day with his wok. He’s so consistent, the Auteur Theory fits him like a glove. I personally love to watch Lang as he invents genre conventions for the gangster film, epic fantasies (past and future), science fiction, and his specialty, the paranoid suspense thriller. I realize that in many cases he simply refined things that were already present in existing pulp cinema thrillers, but his are the refinements that have stuck through time. A car-to-car murder in Dr. Mabuse was so brilliant that he repeated it in his first talkie Mabuse picture, and it has been quoted several times in later spy movies. Moreover, whereas Pearl White and Feuillade are content to repeat the same kidnappings and cliffhangers as a general state of affairs, Lang always relates the machinations of his villains to some wider, all-encompassing theme. Mabuse wants money and power, but mostly CONTROL over a mankind he holds in contempt. Although some critics denigrate Lang’s final Mabuse picture, it is marvelously consistent with his themes. Spy-surveillance has been perfected with the use of television. Mabuse’s nihilism has expanded so greatly that his ultimate goal has become the nuclear destruction of mankind, for its own sake.

Lang pioneered the idea of epics in two parts; I still believe that Metropolis must have been conceived that way, because it even contains a partial storyline re-cap just after the halfway point. Influenced by the romantic excesses of his wife / screenwriter, Lang nevertheless develops themes that unify his silent films — the workings of Spiritual Fate in his afterlife fantasies and mythical epics gave way to modern expressions of violent chaos, with technology enlarging the possibilities of treachery and betrayal on a grand scale.

Kino’s Fritz Lang The Silent Films collection is clearly aimed as a gift item for knowing film fans. For collectors its immediate appeal may be that it condenses seventeen inches of shelf space into two. But if your intended recipient is a budding movie fan, this is a smart gift idea — if Lang isn’t already a favorite, these pictures will make him one. All of the encodings are of the newest release versions. The packaging is a hefty box containing a sturdy book-style disc holder, handsomely designed and illustrated. A booklet comes with an overall essay plus some filmographies, also illustrated with photos and color poster art. Lang must have had one powerful opinion of his stature in his chosen field: his self-approved photos all but shout ‘film genius here, back off.’

The pleasant and friendly little man I talked to was possibly so patient only because he couldn’t see well, and was no longer in a position to throw his weight around. The late Bill Warren told me that he once went to the movies with Lang, Forrest Ackerman and George Pal to see some movie, and watched in disbelief while the three legends joked around on the sidewalk like schoolboys, even though Lang already needed help to get around. Fritz Lang isn’t going to be remembered as an insufferable tyrant or a sadist on the set, but as the maker of these incredibly creative pictures, that represent a fountain of movie art.

I give links to my separate reviews of earlier editions of the contents of the collection Fritz Lang The Silent Films:

The Plague of Florence (Die Pest in Florenz, writer only *director Otto Rippert*, 1919)

Reviewed at Trailers from Hell September 13, 2016

Metropolis (1927; the ‘Complete’ restoration with the added scenes from the Museo del Cine, Buenos Aires.)

Reviewed at Trailers from Hell February 10, 2016