Cult favorite Samuel Fuller explodes the mid-range Hollywood oater with elements we can all appreciate: a ritualistic fetishizing of the gunslinger ethos, and a reliance on kinky role reversals and provocative tease dialogue. It’s as radical as a western can be without becoming a satire. Playing it all perfectly crooked-straight is the still formidable Barbara Stanwyck. Her black-clad ‘woman with a whip’ keeps a full forty gunmen to enforce her will on a one-lady town. Was there ever a writer-director more tenacious than Sam Fuller? When Darryl F. Zanuck stepped down from the top slot at Fox one would think Fuller’s output would have dropped off. After a slight overreach-stumble trying to get a major film going in the interior of Brazil, Fuller reactivated his Globe Enterprises banner and made pictures for release by Fox, RKO, Universal and Columbia. None of Mr. Fuller’s pictures could ever be described as ordinary — he always employed a novel hook guaranteed to arouse curiosity: a white rebel joins an Indian tribe, a peace organization dispatches a submarine on a secret atom mission. Always up front with his politics, Fuller is so brashly honest that even leftist critics admire him — the wild ideas in his crazy Vietnam war fantasy are an accurate barometer of American attitudes.

Samuel Fuller’s best genre ‘experiment’ of the late 1950s is the Fox release Forty Guns, a typically surprising and energetic antidote to the hundreds of cookie-cutter oaters ground out by Hollywood in 1957. Nobody ever forgets Forty Guns. Fuller has the benefit of the great Barbara Stanwyck and a supporting cast energized by his outrageous, over-the-top approach. Stanwyck was turning fifty, and finally surrendering her impressive film career to take parts in TV dramas; Fuller allowed Stanwyck to show that she could still swing the role of a sexually dominant independent woman. Forget the aging, frustrated dames in the thrillers Witness to Murder and Crime of Passion: in this show Stanwyck is so potent, she takes it in stride when a man commits suicide over losing her. It’s also frequently noted that Ms. Stanwyck did her own riding and most of her own stunt work, such as being dragged by a horse with her foot caught in the stirrup. 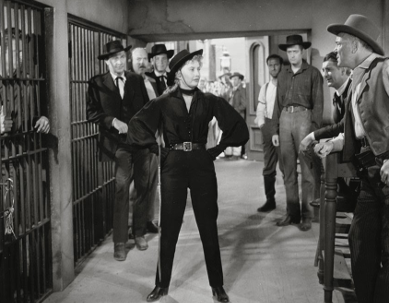 In film school in the early 1970s, Sam Fuller was a directing God right up there with the greats, and rubbing shoulders with his ‘sophisticated’ contemporaries Nicholas Ray and Elia Kazan. We were astounded by the rough-tough belligerence of pictures like Steel Helmet and Pickup on South Street. Forty Guns had a reputation as Fuller’s biggest jaw-dropper. Almost every scene introduces a radical visual or thematic notion that purposely undermines the ‘givens’ of ’50s westerns, especially as regards sex.

Fuller’s basic twist on the western genre flips the ‘cattle empire’ western on its head. Duel in the Sun and The Man from Laramie posited cattle barons  that threaten to eclipse the rule of law; Stanwyck herself had played the frustrated daughter of such a domineering cattleman in Anthony Mann’s impressive The Furies. Fuller sets the stage with a bravura opening that establishes multiple facts at once, without dialogue. In beautifully framed camera crane shots, ranch owner Jessica Drummond (Stanwyck) rides pell-mell into town followed by her 40 gun-packing cowhands. The female juggernaut passes the male heroes riding in a buckboard and buries them in dust. Even before the credits are over we know that Jessica is a respected force in Cochise county: she flaunts that power in high style for all to see. The forty riders also tell us that this production is no cheapie — the only thing separating Fuller’s picture from full ‘A’ status is the lack of color.

Jessica Drummond demonstrates her clout by springing her delinquent brother Brockie (John Ericson) from jail. She ‘owns’ the Sheriff Ned Logan (Dean Jagger) and apparently sleeps with him as well, at least until the ultra-masculine ex-gunfighter and lawman Griff Bonnell (Barry Sullivan) comes to town. Griff and his brothers Wes and Chico (Gene Barry & Robert Dix) are basically the Earp clan, while the no-good & murderously irresponsible Brockie fills the Billy the Kid role. Brokie is Jessica’s main flaw — when she indulges his infantile criminality, everybody suffers. While Jessica and Griff engage in an aggressively hard-edged courtship, Wes cozies up to the willing Louvenia Spanger (Eve Brent), the firearm-obsessed daughter of a gunsmith.

Were the censors tranquilized when they evaluated Forty Guns?  A troubadour character strums a guitar to sing Jessica’s theme song ‘High Ridin’ Woman’, that emphasizes the lyric “She’s a high ridin’ woman — with a WHIP.” Jessica often wears male pants, and her riding outfit is black, head to toe. She ditches one lover for another by writing a check, the kind of kiss-off preferred by powerful men when disposing of unwanted female companionship. The flirtatious dialogue of two romances revolves around the use of gun imagery in the context of sex. Wes and Louvenia work firearm jargon and gunsmith shop talk into everything they say; when Wes sees trouble in the street she tosses him the appropriate weapon, like a caddy intuiting which iron a golfer needs next. Wes singles out and idealizes Louvenia by peering at her through the barrel of a gun, placing her in a ‘rifled’ cameo. Andrew Sarris saw that shot as a substitute for a silent movie iris effect, and compared it to Buster Keaton’s view of his dream girl through a hole burned in a tablecloth in The General. Seen in college, Fuller’s effect seemed a precursor to 007’s pre-credits graphic, depicting James Bond walking into an enemy’s gunsights. In any event, Wes can’t just accost the girl of his dreams, he has to take aim at her.

Griff and Jessica’s post-dinner discussion is blatantly phallic, almost as direct as Bonnie Parker’s later fixation on Clyde Barrow’s sexual six-gun. The surprise, of course, is to hear this veiled smut-talk in an Eisenhower-era movie… young viewers might not appreciate the audacity involved. Because it’s Barbara Stanwyck and Barry Sullivan trading this adolescent talk, it comes off as sexually adult. The only cliché that Fuller indulges is the lovers’ eventual get-up-close encounter in a lonely shed while hiding from a violent storm.

Fuller also has great fun with the formalities of gunslinger lore, as ritualized on TV’s Gunsmoke. By 1957 many westerns had little else to ‘sell’ beyond the iconic notion of gunmen facing off in the street. Instead, Griff Bonnell dispenses with the need for most gunplay just by the way he carries himself. Bonnell at all times walks as if he’s a mobile gun platform, scanning his surroundings and ready to react to any threat. He does this even when unarmed, and even when he’s in casual mode. He’s not only a good shot, he enjoys the ‘curse’ of being unable to miss. Griff is an exaggeration of the lonely quickdraw artist who wishes he could give up his gun. (Sigh) That’s just not his fate.

We get plenty of chances to admire Griff’s talent for ‘walking the walk.’  To to remove the static dullness from several lengthy dialogue scenes, Fuller stages them during marathon walks up and down the long, slightly inclined standing western street set on the Fox Ranch. Cameraman Joe Biroc rolled his camera dolly down a wooden track hundreds of feet in length; the single-take shots eat up several pages of dialogue without a cut. The most impressive truck ‘n’ talk shot ends with Griff and his brother standing in the middle of the street while Jessica’s forty outriders mount and peel off back to the ranch, almost colliding with the camera.

As if one-upping Howard Hawks’ notion of occupational professionalism, Griff doesn’t break from his brute-Zen mindset even when the love of his life is threatened. His pragmatic surgical solution to an impossible stand-off is ludicrous, yet completely within his character.

In his autobiography A Third Face, Fuller explains that Fox wouldn’t let him keep his original ultra-cynical ending, and made him re-shoot a happy finish. Jessica Drummond survives, and is even seen in a white dress at the finale, surrendering the dominant role to the Alpha Male hero. A good soldier in the studio trenches, Fuller knew how to compromise when necessary… when he turned entirely independent, he didn’t let anyone tone down his controversial themes and subject matter.

The Criterion Collection’s Blu-ray of Forty Guns is the best copy I’ve seen; even the studio print back at UCLA had been chewed up through overuse. Joe Biroc’s action cinematography is impressively precise: those forty riders fill the image to the edge of the frame and no farther. Jessica doesn’t live in an impressive mansion set, but Fuller and Biroc’s angles disguise the relative low budget in these scenes.

Fox created the beautiful 4K transfer, which keeps the full ‘scope framing that was slightly compromised on the older DVD. The only visual problem is one that crops up in almost all of Fuller’s movies, when he needs to shorten a scene by cutting dialog in the middle of a shot, but hasn’t filmed any ‘coverage’ — no alternate angles or  appropriate cutaway material.  With nothing to work with in  the editing room, Fuller frequently uses optical re-positioning to create a close-up from the shot in question. The optical punch-ins always look artificial, with the image slightly degraded.

Leading off the extras, disc producer Susan Arosteguy was able to include Samantha Fuller’s full 2013 documentary A Fuller Life, which contains fine interview material with almost every surviving Fuller actor and collaborator.

Added to that are a new interview with Samuel Fuller’s widow Christa Lang Fuller and his daughter Samantha, and a video analysis by the astute Imogen Sara Smith. Fuller’s inimitable gruff voice is heard in a taped interview from London in 1969.

The 30-page illustrated booklet has an essay by Lisa Dombrowski, and reprints the entire chapter on Forty Guns from Fuller’s posthumous autobio. Kim Thompson’s monochrome cover art lends an attractive stylization to one of the film’s key poster images.