Plenty of films considered politically beyond the pale have been locked up, for reasons good and bad. A German filmmaker born decades after WW2 offers a documentary about the controversy over ‘sensitive’ Nazi films, the propaganda features that encouraged racial hatred and offered lies to support the Third Reich’s oppressive policies. We can easily visualize American neo-Nazis cheering the messages in these pictures. What’s the verdict? Let them loose or destroy them? 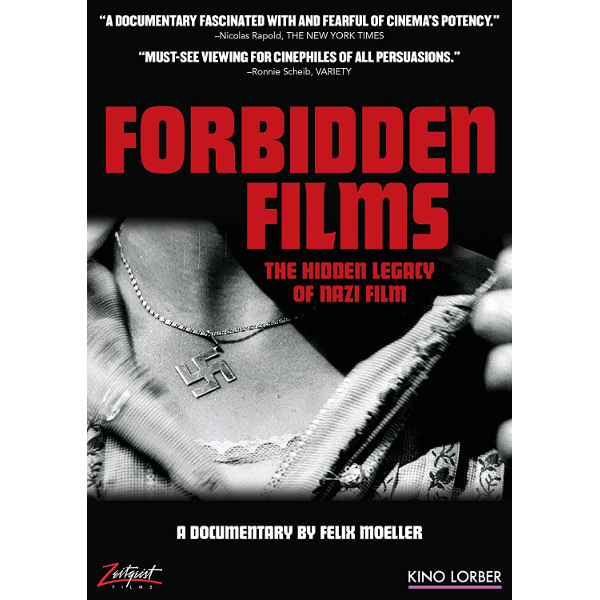 The interesting German filmmaker Felix Moeller has previously made documentaries about the Nazi film heritage, and more recently features on Ingmar Bergman, and the state of German intellectuals accused of aiding and abetting violent terrorists like the Baader-Meinhoff Gang. His Forbidden Films: The Hidden Legacy of Nazi Film (Verboten Filme: das verdrängte erbe des Nazi-kinos) raises an important question about film history: should films with anti-social viewpoints be kept from public view? The show points out the fact that seventy years after the end of Third Reich, Germany holds out of circulation dozens of feature films made during that era, with exhibition forbidden by law. Partly filmed in conjunction with sanctioned screenings of a series of Nazi-era films in Germany in 2014, Forbidden Films allows discussion of the pictures by film history experts, government officials and chosen individuals. There isn’t much suspense to the issue, as the experts seem to have the management of these Verboten items well in hand.

But the subject itself is fascinating. The docu starts with a bit of a history lesson, how Dr. Goebbels placed all feature film production under control of the state. Most Nazi films were designed simply to entertain, and many didn’t reference political issues at all. He commissioned giant documentaries on mass Nazi rallies, which Leni Riefenstahl choreographed specifically for the camera, staged as ‘power propaganda.’ But as the war years neared, more propaganda pictures were produced, to be shown to Germans and to citizens in occupied countries. Spread out chronologically, the hard core message pictures address some of the Reich’s worst evils. Early on in 1933, Hitler Youth Quex seems a corrective to pre-Hitler communist pictures like Kuhle Wampe: Or, who owns the world?   A healthy German boy must resist his mother’s babying and his communist rabble-rouser father, to join the ‘strong as steel’ brotherhood of the Hitler Youth.

As the war began, the heinous false docu The Eternal Jew (1940) put forward a case for the rejection of an entire ethnic group. But other pictures were more subtle. A period costume drama about The Rothchilds (1940) blames the world’s ills on Jews and a ‘global finance conspiracy.’ Never was a whole people so effectively demonized. Need a reason to hate the British? Uncle Kruger (Ohm Krüger) characterizes the English in South Africa as greedy, murdering Empire builders. Is more Jew-hating indicated? Viet Harlan’s Jud Süß (1940) is a period picture about a near-demonic Jew who takes over the good German town of Würtemberg. The evil Joseph Süß Oppenheimer even wishes to ‘defile’ an Aryan beauty as part of his plan to destroy Germany.

Homecoming (Heimkehr) (1941) is a melodramatic weepie justifying the invasion of Poland as a defensive act. Ethnic Germans in Poland are brutalized by oppressive Polish authorities and near-subhuman mobs. A girl is molested on the street, her swastika medal pulled from her neck. A tearful mother just wants to go home to Germany, where she can be with German people and the things that make her feel secure. Hollywood of course produced all flavors of morale-building movies about the war, routinely demonizing the Jap and the Kraut and inventing victory fantasies with intrepid commandos sacrificing all for the flag. These pictures are commonly shown on TCM, and accepted for what they are. Morale-building war-themed pictures were not the norm in Nazi Germany. The one example shown in Forbidden Films is Stukas (1941). Cheerful bombing crews sing as they prepare to strike out at Germany’s enemies; winning the war is easy and they get to return to base for more singing and drinking.

Also closer to home is I Accuse (Ich klage an) (1941), a pro-euthanasia drama in which a doctor ‘does the right thing’ and ends the life of his wife stricken by multiple sclerosis. We in America are just beginning to investigate right to die laws, but the defense of the doctor in the Nazi film supports by inference all of the legalized medical interventions by the Nazis — forced sterilization, and the ‘euthanasia’ of widely-defined categories of ‘unfortunates.’

Made late in the war, the expensive color epic Kolberg (1945) is another period costume picture, this time about a German city threatened by Napoleon. Rather than surrender, representatives of the civil government join the military to resist, even though it means annihilation. Shown (barely) as the Allies and the Russians closed in from both sides, the message to the German population couldn’t be clearer. The clips shown are long enough for us to judge the quality of the films as well — they’re full studio productions, well-shot and performed. The big Nazi stars Hans Albers, Heinrich George, Otto Wernicke, Zarah Leander and Emil Jannings are seen in action. Interviewed at the retrospective screenings, attendees are surprised at how well the pictures play. They’re emotional and affecting.

The experts mostly vote that the movies be saved, but not necessarily freely distributed. It’s reported that neo-Nazi groups show bootleg copies anyway, and cheer them at clandestine screenings. A former neo-Nazi testifies that the films are popular and raise morale because they ‘prove the historical truth’ of the so-called international Jewish conspiracy.

Some spokespeople say that banning the films gives them the cachet of ‘taboo,’ making it seem as if some truth is being denied the public. An Israeli spokesman would prefer that the most virulent anti-Semitic films be restricted because viewers are easily swayed by such propaganda.

In a fine N.Y. Times article, critic J. Hoberman makes the case that the Nazi films should be handled like our own The Birth of a Nation, as ugly propaganda better shown than repressed. Forbidden Films was screened for a full week for free at The Film Forum, to open the discussion here as well. Zeitgeist Films / Kino Lorber’s DVD of Forbidden Films: The Hidden Legacy of Nazi Film is a handsome production without frills. It doesn’t try to be on the leading edge, as indicated by a frequent screen with a dozen or so clips playing simultaneously. They’re labeled: ‘For the War,’ ‘Anti-Polish,’ ‘For the Party,’ ‘For the Führer,’ etc. The camera will choose one, and a moment later we’re viewing a scene from one of the restricted movies. Director Moeller lets his interviewees speak at length. A couple of them are descendants of actors and directors from the Nazi years. They are contrite about their heritage, even as they defend their parents as being the same as film artists anywhere. [That almost feels like a joke, as the image of film artists of any era is that they’ll sell their souls to keep working.]

The film clips are in good shape and the show moves quickly enough so as not to bog down on any particular argument. At this particular time in America, the idea of ‘trusting in the judgment of the ordinary citizen’ is somewhat troubling. Back in the 1950s movies condemned by the HUAC were picketed. Few of the radical political films of the late 1960s saw wide commercial distribution, due to threats to wreck or burn down theaters. Christian radicals shut down some screenings of Scorsese’s The Last Temptation of Christ. I don’t think that exhibitors want political controversy — they’re having a hard enough time getting audiences to come to theaters, without fear of terrorism.

I have to admit that I’m overly sensitive to propaganda (and also to dishonest advertising), especially when I think a particular film will encourage ideas that I think are dangerous to the public; if a virulent film mandated by the government advocating the suppression of arrogant Swedish-Irish American film reviewers were to become popular, you can bet I’d be concerned. In my time I’ve met a number of co-workers that sympathized with Nazi aims, usually starting with the statement that ‘Hitler was wrong, but he had the right idea about a lot of things, you know?’

With the Internet, the cat’s out of the bag. Professors and experts can give film classes about how these Forbidden Films should be received, but individuals will always interpret movies as they please, and as anti-socially as they please.