John Wayne, Robert Ryan and some thrilling color combat footage grace this Howard Hughes WW2 aviation epic, that’s famous for being the odd-title-out in the filmography of Nicholas Ray. Just how did the politically diverging Ray and Hughes get along so well?  The WAC’s sensational Technicolor restoration does the real combat footage a big favor: minus scratches and dirt, it looks better than ever. This by-the-numbers Naval aviation epic — more precisely the Marine Corps. — has looked pretty wretched ever since indifferent color prints were made for television. RKO’s production revisits the fighting in the Pacific Theater with an eye on promoting enlistment during the Korean conflict. Anticipating the commercial combination of John Wayne and combat in the Big Dubbaya Dubbuya Two, the Warner Archive has come through with an impressive restoration. It looks sensational, even the full twenty minutes or so of excellently-edited actual combat footage.

Howard Hughes loved planes in combat, as witness his endless shoot for Hell’s Angels across the transition from silent films to talkies. Flying Leathernecks is filmed with exactly the same methods as 1942’s Flying Tigers — aerial footage new and canned is intercut with studio close-ups of intrepid actors playing with their joysticks (cough) in cockpit mockups. If the technique is mildly dusty, the screenplay by James Edward Grant could be a rewrite of a 1930 script for WW1 flyers. By my count Grant wrote eleven starring vehicles for John Wayne. His credo in this one is simplification, despite action that reaches from the struggle on Guadalcanal to pitched sea battles with the Japanese Fleet. Those episodes would be covered in detail in movies as diverse as In Harm’s Way, The Gallant Hours and The Thin Red Line. The other writer is Beirne Lay Jr., whose forte is aviation movies — he’s the author of the book Twelve O’Clock High.

The story originally titled Flying Devil Dogs begins on Guadalcanal in 1942. No-nonsense Major Daniel Xavier Kirby (John Wayne) takes command of a Marine fighter squadron. The unruly pack of young pilots expected their best buddy Capt. Carl ‘Griff’ Griffin (Robert Ryan) to get the job. Kirby wants to sell his idea of using his squadron to support the ground troops, but the brass worries that friendly fire injuries will result. He keeps his boys flying through nightly raids by the stronger Japanese force. Kirby has command issues with first officer Griff, who coddles the men and makes excuses for their unprofessional judgment. Rough experience proves that Kirby’s way is best.

Flying Leathernecks is pretty standard stuff, even if it avoids some clichés —  pilots don’t compete for the same girl back home as in so many other combat fantasies. The squadron splits its time between dogfights with zeroes, knocking out Kamikazes and using their wing guns to chop up the Japanese defenders opposing the ‘mud marines’ doing the hard fighting on the ground. Tough new C.O. Kirby comes in with a reputation as a hard case, but soon wins over his men. Passed-over Griff isn’t resentful, but he keeps trying to play protective daddy when choosing who goes on dangerous missions. 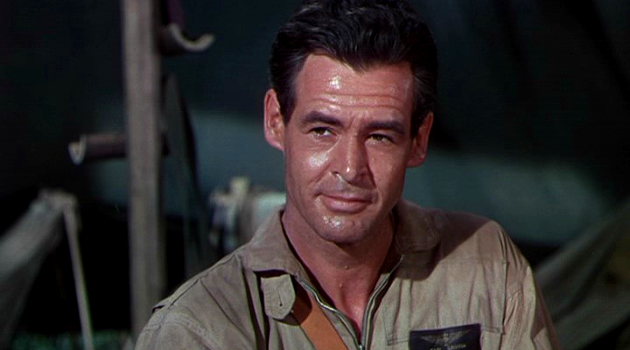 Film fans not in love with John Wayne will be curious to see how he plays opposite Robert Ryan, an actor with a much more high-powered reputation. Wayne comes out on top because the script favors his brand of thesping. Wayne aces the terse tough talk while poor Ryan is made to play the sensitive guy who doesn’t quite understand the fang-and-claw fighting credo. His Griff keeps taking the side of the overworked, overstressed fliers. When put on the spot he makes speeches that quote classic literature!

Wayne’s Major Kirby possesses a natural intuition for the finer points of command, and can inspire his fliers without being their pal. He also doesn’t sweat the near-suicide missions he must lead. Every supermarket  manager knows that the only way to get results is to push the staff to the limit, and not worry about how many are going to be killed on aisle three where the Novichok is kept. (Just checking to see who’s reading.)

Kirby’s pilots are a bunch of whining doubters that need to be whipped into shape. The main young hotshot is Lt. Vern ‘Cowboy’ Blithe (Don Taylor of The Naked City), a happy galoot who insists on wearing cowboy boots. As this is Technicolor, they’re very colorful cowboy boots. Vern gets shot down (maybe twice?) and when rescued in one piece rejoins the outfit with a big splash. Other colorful notable college-boy pilots are played by Maurice Jara (of The Lawless), James Dobson, Brett King, John Mitchum (yep, a brother), future casting legend Lynn Stalmaster, and noir favorite Adam Williams (below right ↓ Without Warning!, Vice Squad, The Big Heat). 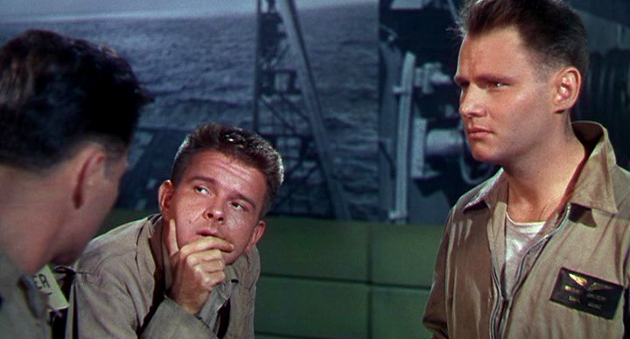 Howard Hughes clearly loved movies with airplanes in action. The Marine Corps at El Toro and Camp Pendleton helped out shooting new footage of strafing and bombing runs on the practice ranges. RKO must have added some special construction at the Pendleton practice ranges for at one point they blow up a dummy building that looks like a temple from an Arabian Nights movie.

Don’t forget the fresh-scrubbed women back home, most with exaggerated bustlines. A roundup of girlfriends appears early on, during a mail-call scene. Then Major Kirby spends a bit of time with his wife (lovely Janis Carter of Night Editor), who weirdly seems more excited than he is about him going back into murderous combat. Ms. Carter is treated with some respect (she’s a mother, after all) but somebody’s mail-call girlfriend (Mona Knox) is lined up for the camera as if posing for a brassiere ad. Neither Ms. Knox nor Gail Davis, who plays Lt. Blithe’s wife, gets screen billing. Gail Davis is as cute as a button. It looks as if almost every film she did was a western of one kind or another.

What ultimately puts the show over the top is the way it interpolates a wide assortment of color WW2 combat footage that puts a seal of authenticity on the battle scenes. There’s also a lot of it, so viewers hungry for more drama may look impatiently at their watches during the fourth or fifth major battle scene. But the real war footage on view, all chosen by producer Edmund Grainger, is way better than average. A big chunk of it is also seen in the short 1944 feature The Fighting Lady —  breathtaking aerial combat filmed in 16mm Kodachrome by the pilots’ own gunnery cameras. Blown up to 35mm Technicolor, the footage is staggering when seen on a big screen. The combat footage of ground campaigns, Kamikaze attacks, etc., is also impressive, and edited to excellent effect. I’ll have more to say about this Blu-ray’s treatment of the stock footage below. 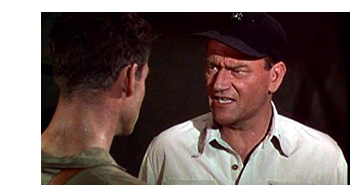 Flying Leathernecks is a bit different than earlier WW2 flight sagas. We see Japanese fliers in their cockpits, but ‘anti-Jap’ hostility is a thing of the past: James Edward Grant’s dialogue hopes not for an immediate victory, just good luck in the continuing struggle against the ‘enemies of freedom.’  That’s Cold War talk, Pilgrim. Grant’s next script pitted John Wayne against those Commie intellectual academics, in 1952’s Big Jim McClain.

I’m a stranger here myself.

I’m belatedly acknowledging that this show was directed by the ‘auteur’ Nicholas Ray, right in the middle of some of his best-remembered work: In a Lonely Place, On Dangerous Ground, etc.. Film critics tend to dismiss Flying Leathernecks as a punishment dealt their fave director Nicholas Ray by producer Hughes, the oddball tyrant. In 1951 directors tainted by liberal attitudes or activism were an endangered species. The Hollywood careers of Jules Dassin and Joseph Losey came to a swift end when they fled to England to avoid possible congressional summonses.

Nicholas Ray somehow slipped by the HUAC, and some assume he was protected by his relationship with Howard Hughes, who liked him even with his Roosevelt-era NRA associations. Ray worked on whatever was asked of him, even retakes for Josef von Sternberg. Having Hughes on one’s side was a guaranteed way not to be bothered by the committees, and Ray had good survival skills.

Like every other director at RKO Ray was put to the litmus test of being asked to direct Hughes’ virulent pro-HUAC valentine movie I Married a Communist. Ray was too smart to turn the job down, but it eventually went to Robert Stevenson. My completely unfounded personal pet theory to explain Nicholas Ray’s anti-HUAC Teflon is that the director’s cooperative and professional work on Flying Leathernecks put him in solid with the big boss, the mogul that nobody ever saw. 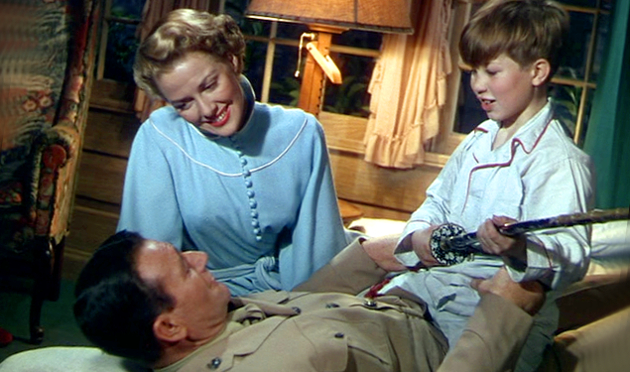 Although competent in all respects Flying Leathernecks in no way resembles a committed Nicholas Ray picture. Ray didn’t rock the boat. He  dutifully gave Hughes exactly what was needed. Wayne comes off well, and Robert Ryan’s Griff goes from wishy-washy to toeing the line like a good sidekick should. There was no meeting of the minds on the set. According to biographer Bernard Eisenschitz, John Wayne ‘was kind to everybody’ but ended all political ‘discussions’ by simply saying, “You’re full of shit.”

The domestic scenes back home are also by-the-numbers but look great in Technicolor. Happy wifey Janis Carter wears crimson dresses, although not with the neckline shown in the film’s poster. Wayne’s son is played by Gordon Gebert of The Narrow Margin. In one faintly disturbing scene Kirby gives his tot a captured Samurai sword, which the kid then waves through the air like a plastic toy. Those things are dangerous, buddy!  [Note: Flying Leathernecks was filmed second but released before The Narrow Margin, which was delayed by almost two years. That means that the great little actor Gebert grows appreciably younger between the films.]

When all is said and done Flying Leathernecks is a truly rare item, a downright sane Howard Hughes production. He began filming his Jet Pilot in 1949 but kept toying with it until its 1957 release (!), when its ‘experimental’ aircraft were pathetically out of date. And everyone knows that Hughes holed up in a Las Vegas hotel suite through most of the 1960s, screening and re-screening his favorite production The Conqueror. 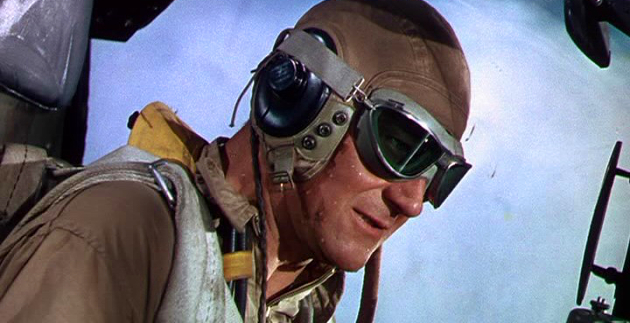 The Warner Archive Collection Blu-ray of Flying Leathernecks is a big surprise — the fully restored color is gorgeous, which isn’t expected in a war movie with lots of khaki browns and navy blues. Even the rather desert-like airstrips representing Guadalcanal look good. The cinematography of William E. Snyder makes Wayne and Ryan look good, and the women are dazzling in close-up.

The show begins with a B&W RKO logo, for some reason. But the big surprise are all the stock shots, which look better than ever, bright and clear, with little or no damage or schmutz. Older transfers exhibited all of the flaws that over-used combat footage is heir to — scratches, digs, unsteadiness, even out-of register color and frame lines in the shot. Back in 2004 I wrote that the DVD…

“… always looked pretty blurry on TV prints. Just about the only way it could be improved is with digitally processing to remove dirt and scratches, which can be plentiful.”

The digital cleansing seems to have done the trick. It’s still easy to separate the original material from newly-filmed inserts shots, but the quality is vastly improved. For the war movie fan in search of vintage ‘combat reality’ Flying Leathernecks can’t be beat.