Make room for Mota, the man from Mars!  Mota enlists a scientist and two thugs to lay the groundwork for a full-scale invasion from space. Only the heroes of Fowler Aerial Patrol can save us! Republic’s serial adventure ought to carry an “80% Recycled” label — even the flying disc craft is second-hand, bearing a Japanese Rising Sun flag from a previous wartime serial. 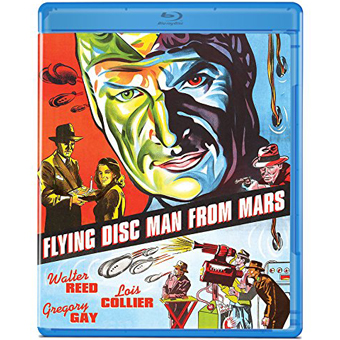 Looking at the gloriously redundant Flying Disc Man from Mars, one has to think that Republic Pictures had found its ultimate groove, remaking essentially the same film over and over again in serial form, in exactly the same hyper-literal style and with the exact same production staff. This 1950 release has an identical writer, producer, director and composer as Republic’s The Invisible Monster, made the same year. Once again, Ronald Davidson’s screenplay is barely more than a framework to allow older Republic action scenes and special effects to be recycled. The acting is in the same strange ‘business as usual’ vein, with the dedicated but thick-headed heroes squaring off against gangsters, mad scientists, and (in this case) aliens bent on world domination. It’s much the same as a Yakuza film, a series western or a Noh play — the rigid format is its own reason for being. It’s likely that most of the kids that can remember the original experience of seeing these serials are either gone or have long forgotten them. It’s up to the nostalgia-obsessed true believers that worship the logo, “A Republic Serial” to pass on the appreciation for what might be movie-dom’s most naive art form. 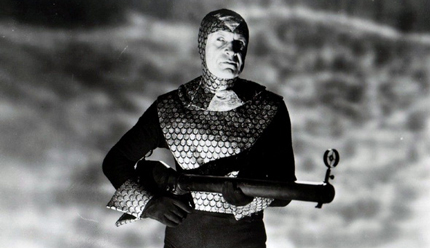 The Invisible Monster graced us with the charming adventures of a mad scientific genius who wanted to take over the world with his incredible invisibility mechanism, which operated under such limited conditions as to make it functionally impractical. The bad guys spent the entire twelve chapters of action trying to get ready to conquer the world, and in truth only made themselves known to a few insurance investigators. Their efforts instead went into pulling off ordinary crimes to raise money for their mass takeover of the world. It’s as if Lex Luthor never got around to challenging Superman with a piece of Kryptonite, but instead started a Crowdfunding scheme to get the money to start looking for a Kryptonite meteor… only to encounter difficulties with his Wi-Fi access.

Flying Disc Man from Mars is a sort-of sequel to a 1945 serial called The Purple Monster Strikes, which uses the ‘alien possesses the body of a human’ idea normally associated with later ’50s era science fiction films like Invaders from Mars. A Martian (Roy Barcroft) tries to spearhead an invasion, but is foiled after the usual twelve chapters of cliffhangers. In Flying Disc Man a similar Martian called Mota ( ‘Atom’ spelled backwards ) is buzzing the stratosphere. Inventor Dr. Bryant (James Craven) induces Kent Fowler (Walter Reed) of Fowler Air Patrol to install a new atom ray in his patrol P-40, in hopes of shooting down the UFO. The non-sequiturs of logic proliferate at a staggering rate beginning with the assumption that the UFO is hostile. They do shoot it down, and Fowler considers the case closed, with no need to inform the government. But Bryant is immediately contacted by Mota, the inhabitant of the flying disc (Gregory Gaye). Mota talks like a Russian. He wears the costume of the Purple Monster from the previous serial. He recruits Bryant into helping him conquer Earth for the Supreme Dictator of Mars, in return for a kingdom in the New Martian Order. Together they recruit a 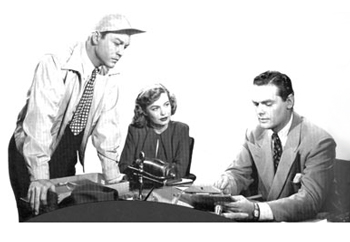 pair of thugs to do their dirty work, Drake and Ryan (Harry Lauter & Richard Irving). Ten minutes into the serial, we’re back in the same rut as The Inivisible Monster. Kent Fowler and his helpers Helen Hall and Steve (Lois Collier & Sandy Sanders) repeatedly engage in inconclusive slug-fests and shootouts with Drake and Ryan.

A lot happens, and none of it means very much. Mota is little more than a substitute for nasty Uncle Joe Stalin, who common sense tells us is the culprit behind the sensational ‘flying discs’ jitters of the day. Much of the action centers on Mota’s establishment of a headquarters inside an active volcano (this Mota really needs counseling), and the secret trips back and forth in a new flying disc, represented in live-action shots by a rather dented-up full scale prop. The cliffhangers are almost always an explosion, a car or truck wreck, or a car & truck wreck plus an explosion. Or how about an odd collision, like a P-40 slamming into a car?  The cliffhangers cheat every time, inserting new footage that alter events to show Kent or Steve leaping from a vehicle in the nick of time.

With the orgy of stock footage repurposing going on, is it too much to believe that Fowler’s planes are P-40s because Republic had plenty of film clips available with that plane, from the John Wayne Flying Tigers forward? Forget for a moment that a P-40 seems a really impractical choice of planes for performing aerial security work or chasing flying saucers. Flying Disc Man from Mars’ collection of fights, dialogue scenes and vehicle interiors are designed to make maximum use of the studio’s stock footage. The recycling of the unimpressive Purple Monster costume is bad enough — it looks like fantasy pajamas for a knight of the Round Table — but fans familiar with Republic serials must have immediately recognized the flying disc as a prop used several times before. In wartime serial it represented a Japanese secret weapon – and it still has a rising sun emblem painted on its tail. Likewise we have to think that in some shots we’re not looking at Gregory Gaye, but Roy Barcroft, the actor who played the Purple Monster. Actor Barcoft must have had a fine sense of humor. He gave that movie his own sarcastic title: “Jerk in Tights from Boyle Heights”. 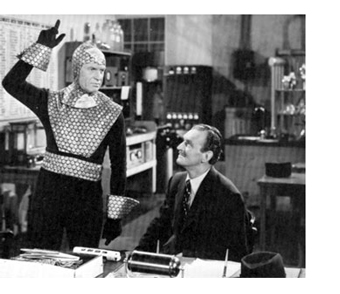 This need to recycle old footage explains why both heroes and bad guys wear nondescript, chunky suits and blocky, slightly old-fashioned hats — everybody is trying to match footage filmed in 1943. If Republic had continued into the ’60s and ’70s, maybe we’d see actors running around in rigid ‘big suits’ like David Byrne in Stop Making Sense. Come to think of it, playing Talking Heads music while watching Flying Disc Man from Mars is a good idea. I attended several ’60s rock concerts accompanied by light shows that mixed oil-smear projections with excerpts from Republic serial fistfights.

The fistfights are Republic regulation: Kent commonly receives 20 haymakers to the face and comes out with nary a smudge. I’d repeat my snide remark about no hats coming off, but this time a few do — which must have been a terrible strain on the continuity person. In the first shootout, the good guys and the bad guys empty their guns at each other by the side of the road, scoring no hits to either men or the cars they’re hiding behind. I counted: three belligerents fire 26 shots with no reloading. Nobody hits nuthin’. The LAPD has a much better batting average.

The show is obviously for kids, that kind that wanted to see a fight and an explosion in every chapter. Ronald Davidson’s script is devoid of anything beyond simple exposition — there isn’t even any fun banter between Kent, Steve and their sexy assistant Helen. At least once per episode, Mota delivers a lame announcement on his radio that gives away his entire evil scheme. It’s a way of reminding viewers that all the nonsense is for a definite purpose: “If we are to make a start in our plan for world conquest, we must have uranium!” 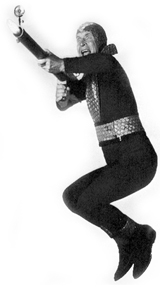 Davidson and producer Adreon may have expended most of their creative brainpower thinking up the chapter titles… or maybe not:

A major appeal for serial fans is still the impressive special effects, by the now-famous Lydecker brothers. Their work is indeed stunning, with excellent photography of very large landscape models and miniature cars, trucks, planes, bridges, etc., often exploding. A montage of a flying disc bombing run rounds up every cool ka-blammo! explosion shot in the Republic stock library. But every once in a while the action becomes downright sadistic. The most gruesome cliffhanger sees a live actor tumble very convincingly into a blazing incinerator. Nobody seems overly concerned, even when it looks like the hero is getting The Big Heat, instead of a semi-innocent bystander.

And of course, the absurd situations and lobotomized under-acting generate a great deal of unintentional humor. My favorite dialogue line is another Mota gem, delivered with full villainous sincerity. Saddled with his clumsy henchmen, the poor boob can’t make a single bit of progress toward his nefarious goal, yet he still has his eye on the prize:

“We can’t risk having our plans for world dictatorship upset now!“ 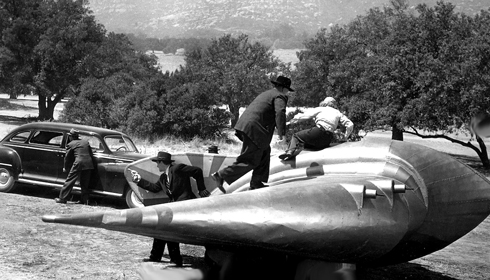 Olive Films’ Blu-ray of Flying Disc Man from Mars shows that Republic must have taken fine care of their film library, perhaps keeping their negatives in the most secure section of the CFI lab’s vault! Although the unchanging lighting setups make me think that the cameraman never had to use more than one f-stop, the film’s images look great in the HD format. By now I think I’m able to draw a map of the Republic studio by memory, just from observing all the on-the-lot locations used for ‘hideouts’ and ‘secret warehouses.’

The robust audio flatters Stanley Wilson’s music, which is dynamic in the title scenes and almost invisible everywhere else. The sound effects for the rumbling volcano, etc., come across well.

Olive has chosen two latter-day serials to begin their Blu-ray series – they made almost seventy, not counting the feature cut-downs made from them. Republic had Dick Tracy, Spy Smasher, a G-Man series, Captain America, Zorro and The Lone Ranger. If the rights for the comic book characters have elapsed, it’s too bad, as Rocco Gioffre once showed me some pretty incredible stunts from Zorro’s Fighting Legion. But there are always the ‘Rocket Man’ adventures — the infantile concept of strapping on a jet engine to fly around looking for zombies in the stratosphere, still carries a major appeal.

Flying Disc Man from Mars
Blu-ray rates:
Movie: … interesting, and Good in a goofy serial kind of way. Can’t nail me down on this one.
Video: Excellent
Sound: Excellent
Supplements: none
Deaf and Hearing-impaired Friendly? N0; Subtitles: None
Packaging: Keep case
Reviewed: December 2, 2015