Samuel Fuller’s first picture under his Fox contract is a fine Korean War ‘suicide squad’ tale, filmed on a sound stage but looking quite authentic. Richard Basehart leads a fine cast. Lots of cigars get chomped and Gene Evans is actually named Sgt. Rock. Plus an excellent commentary from Trailers from Hell’s new guru Michael Schlesinger. 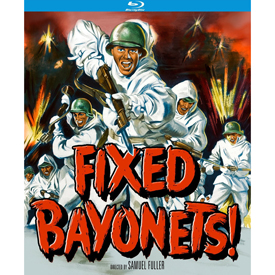 Sam Fuller’s third independent film The Steel Helmet was a risky proposition — a Korean police action war combat film that ignores the usual pieties to instead suggest that war is a thoroughly nasty business and that the best combat soldiers are ruthless survivalists. A boon to recruitment? Only for masochists. Conservative hawks were outraged and Edgar J. Hoover tried to get the movie taken off screens. But the show was a surprise major hit for cheapie distributor Robert Lippert.

Over at Fox, production chief Darryl Zanuck knew a wildcat filmmaker when he saw one and hired the cigar-chomping Fuller for a five-film string at 20th Century Fox. Sam’s first writing and directing effort for the studio was a ‘do it again, only different’ assignment, but Zanuck got full value. Fixed Bayonets! is a more elaborate and perhaps more realistic return to the then-raging Korean War setting. In the Fall of 1950, the first divisions in Korea were taken by surprise by a surge of new combatants from China. American forces suffered heavy losses before regaining the high ground. 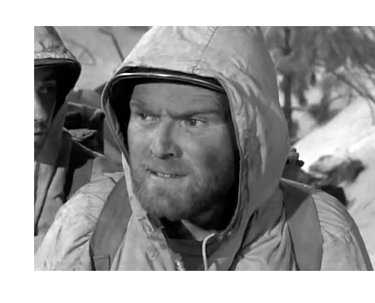 Returning from The Steel Helmet is the quintessential tough G.I., Gene Evans. He plays the iconic Sgt. Rock, a gravel-voiced tough nut with the guts to hold a patrol together no matter how hot the action. And we can tell that it’s definitely a Sam Fuller picture, with other character names like Bigmouth, Zablocki, Griff, and Bulchek. Didn’t anybody fighting in Korea have a wimpy name?

Under pressure from the Red Chinese an entire division of troops fighting under the United Nations banner must retreat and regroup. A special platoon is chosen to perform the un-enviably dangerous rear-guard action. Experienced Sgt. Rock (Gene Evans) does what he can to break in young Cpl. Denno (Richard Basehart), who has a problem that might seriously affect his performance in action: he can’t imagine himself shooting a man in combat. Taking control of a narrow, snowy pass, the men do their best to avoid freezing while playing tricks to convince the Reds think that they’re holding the line in strength. A lot of lessons will be learned, and blood spilled, before the platoon can retire.

Any soldier or ex-G.I. in 1951 could tell that Sam Fuller knew of what he wrote. Fixed Bayonets! overflows with dogface lore and lingo, and a keen knowledge of what it’s like to be expected to fight while getting hammered by the elements. These crack shot riflemen pray at the altar of dry socks: the most ‘real’ scene in the picture has eight guys crowding their bare feet into a mass and rubbing them to avoid frostbite. Sgt. Rock isn’t as nihilistic as his previous Sgt. Zack, but he barks out the same practical orders whenever someone catches a fatal bullet: “Strip him of everything we can use! Wrap him in a blanket! Bury him! Mark him!” Rock has the men make fake soldiers out of snow to draw enemy fire. He also freaks out the Reds by capturing and blowing one of their own bugles. Unfortunately, the cleverness works two ways. While some of his less trustworthy lookouts report nothing happening, a North Korean squad silently overpowers them in just a couple of seconds. Unlike many other films about the Korean War the enemy is neither primitive nor stupid. No claim is made that ‘being right’ will win a fight.

Several of Fuller’s later Fox pictures and independent productions would become bizarre in-your-face anti-Commie fantasies. The claustrophobic battle epic China Gate has Nat King Cole volunteering for mercenary combat work in Vietnam just ’cause he hates Commies. Hell and High Water is a crazy comic book mission to thwart a Red Chinese plot to start WW3 and blame it on innocent America. Fixed Bayonets! tones down the rhetoric. Sgt. Rock respects his enemy. He refuses to shoot their medics even though the Reds don’t return the favor. The strongest political remark is, “They said this is a police action. What are we, cops?”

Sgt. Rock should work for Hallmark, as he has a gritty comeback for every social situation. Being fired upon? “Spread out and dig for money!” Troops complaining? “See that? That’s Jonesy’s ear. Got shot off a couple of minutes ago!”

Fuller’s ethnically diverse platoon rings true. Smart-talking wise guy Skip Homeier is initially a pain, but shapes up as a good squad member. Fuller stock player Neyle Morrow must creep through a minefield because the platoon’s only map is on a corpse stranded in the middle of the mines. Terrified medic Wheeler (Richard Hylton of Lost Boundaries) at first whines that he’s no doctor, but decides that he can help the wounded after carving a bullet out of his own leg. Richard Basehart’s Danno watches with an amused expression; he pulled the same stunt in his career-launching He Walked by Night. 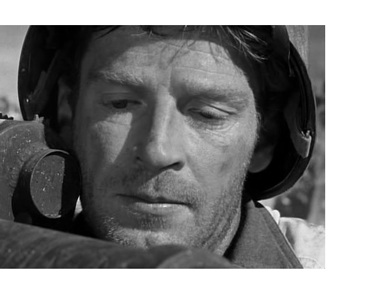 Richard Basehart mostly stays cool as Denno but dreads what may happen when he’s called to take responsibility for the other soldiers. Sure enough, when every man over his rank gets shot to bits, Denno’s voice suddenly drops an octave and he morphs into the tough guy the platoon needs, ‘becoming’ a new Sgt. Rock. Necessity builds the man.

The entire movie was filmed on one elaborate interior set by ace cameraman Lucien Ballard (The Wild Bunch), on a crane that swoops up and down the hillsides as Gene Evans leaps from position to position. The set seems almost as tall as it is wide — the actors do a lot of climbing. It looks as if shaved ice is put in the foreground of shots to augment the illusion of cold, which is well maintained considering that nobody on this freezing battlefield has frosty breath. The only flaws we see are a few errant shadows on the cyclorama backdrop. Sam is already trying to make do without enough set-ups, as a number of close shots are manufactured by cropping wide shots with grainy optical blowups. And although he’s backed off from the extremes of I Shot Jesse James, he goes in for plenty of dramatic choker close-ups, contrasted with mobile wide shots. No namby-pamby ordinary coverage for Sam.

Ever the patriot, Sam Fuller is to be commended for making in-Korea combat pictures when some producers were sticking with WW2 retread stories. Fixed Bayonets! premiered at Grauman’s Chinese and apparently did well, cementing Fuller’s standing with the like-minded production boss Darryl Zanuck. The most well-known snow-based infantry combat film from this era is still MGM and Dore Schary’s Battleground, but Fixed Bayonets! is quality goods as well.

Everyone rushes to mention that Fixed Bayonets! has the pre-fame James Dean in his first uncredited bit part. I take their word for it, but I never would have identified Dean from the shot in the film. But he does appear to be the soldier on the right in the photo just below. 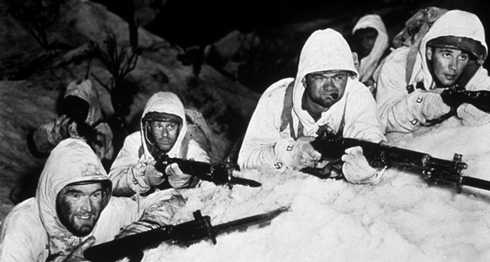 The KL Studio Classics Blu-ray of Fixed Bayonets! is a polished and handsome encoding of this attractive war picture. The frosty snow surface glistens just like it was made of ice. The men seem appropriately grizzled and weary. A big challenge for Fuller was telling them apart — they wear identical snow gear and sometimes all we see are their noses.

A trailer is included that tries to suggest that ‘the women they left behind’ are somehow part of the story. These soldiers mostly talk about cold toes, not dames. Kino has tacked on several other war-themed trailers as well.

A big draw for this reviewer is a new audio commentary hosted by producer Michael Schlesinger, a personal favorite speaker on film at various venues, who co-hosts one of the best commentaries ever, Criterion’s It’s a Mad Mad Mad Mad World. Michael has worked in publicity and distribution, and also with Samuel Fuller, I believe in conjunction with the controversial White Dog. His guests are the director’s widow and daughter, Christa Lang Fuller and Samantha Fuller, who have new books and a new documentary out about Sam. Michael steers the conversation and juggles the heavily researched facts, while the ladies interject personal stories about Sam’s actor friends. We get a good picture of the director’s personality. We also get deep into identifying practically everybody on screen, even though only a few are officially credited. Schlesinger even points out Wyott Ordung, who would soon write Robot Monster and direct Roger Corman’s first film production, Monster from the Ocean Floor. Yes, that’s the kind of detail that impresses Savant.