Paul Schrader’s austere, intense thriller is billed as a return to the director’s ‘transcendental’ roots, although we suspect he never really left them at all. Ethan Hawke, Amanda Seyfried and Victoria Hall immerse us in a country pastor’s dreadful impulse to act on spiritual values and strike back against evil. 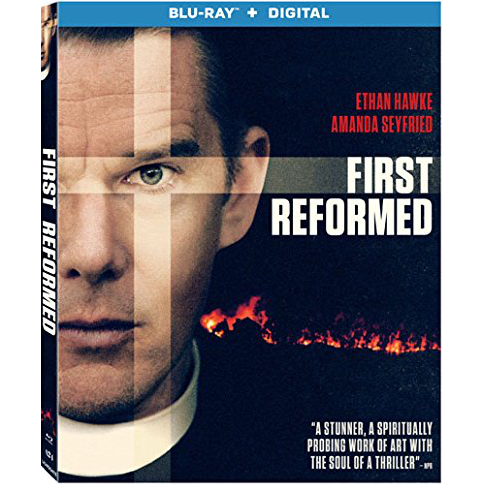 Paul Schrader begins his commentary on the new Blu-ray of First Reformed practically spelling out my review criticism — he says his movie is made from pieces of other movies, a truth that becomes all too clear as we watch. For viewers unfamiliar with Schrader or the films that formed his style, his show will be a gripping suspense item, with the kind of dread factor that slowly eats a hole in one’s stomach. Reviewers were quick to liken it to Martin Scorsese’s Taxi Driver, which is really a grindhouse/arthouse spinoff of Schrader’s main themes. My review will not spoil anything for the uninitiated. Those that have followed Paul Schrader since his breakthrough book on Transcendental Film, and his early introduction of Film Noir to the English language, are more likely to be greeted with a partial ‘been there done that’ experience.

The story retraces the outline of Robert Bresson’s Diary of a Country Priest, but with added thriller elements that threaten a reprise of one of the Schrader’s ultra-violent genre studies from the Seventies: Taxi Driver, The Yakuza, Rolling Thunder. (No Spoilers.) Pastor Toller (Ethan Hawke) runs the small, congregation-challenged First Reformed Church. Located somewhere in upstate New York, the historic site is owned and run by ‘Abundant Life,’ a faith-based nonprofit corporation. AL’s chief minister Jeffers (Cedric Antonio Kyles, a.k.a. Cedric the Entertainer) is concerned that Toller is not taking care of himself and not showing enough enthusiasm for First Reformed’s upcoming 250th anniversary celebration; he chides Toller for always being ‘in the Garden at the Darkest Hour.’ Toller came to the job as a former military chaplain who lost his son and his marriage. He does not look well and is indeed ignoring a host of alarming health symptoms.

Toller agrees to help church member Mary (Amanda Seyfried) deal with a problem with her husband Michael (Philip Ettinger), who is inflamed with despair over the state of the world, especially its destruction by global warming. Toller applies himself in full sincerity, but Michael’s situation only compounds the pastor’s own self-doubt. Toller also cannot help but be infected with Michael’s sense of mission. That idea is further aggravated when he’s scolded by his church’s main benefactor Mr. Balq (Michael Gaston), a notorious industrial polluter and global warming denier. Toller finds himself able to counsel the despondent Mary, but cannot abide the unwelcome attentions of AL social worker Esther (Victoria Hill). He has already turned down Esther’s romantic overtures. When she invades his personal space by consulting his doctors, Toller’s overreaction is shocking.

First Reformed is not a remake of 1950’s Diary of a Country Priest but its structure is almost identical — all that is added is a more violent contemporary conflict. Bresson’s Priest of Ambricourt suffers because, try as he might, he fails in his attempt to emulate Christ. He fails to help his parishioners, his good efforts are misinterpreted, and he finds himself spiritually isolated: ‘God’s Lonely Man.’ The French priest succeeds only in punishing himself by nursing a deadly stomach ulcer. Ethan Hawke isn’t nearly such a tragic figure — he relates well enough to people, and his efforts to counsel Mary and Michael are sincere and thoughtful.

Schrader completely embraces Bresson’s camera style, using similar limited angles, a deliberate pace and a measured way of slowing scenes down. Yet the movie maintains a good forward momentum because we begin to dread how far it will take its premise of a man of faith converting despair into action. The anticipation of a potential terrible political act will intrigue some viewers and turn others off entirely.

The austere visuals are set off by thoughtful, strongly felt characterizations. We of course wonder if Toller will become romantically involved with either of the women in his circle. Esther’s forward overtures only infuriate him — he’s insistent on denying himself a conventional relationship. Mary’s situation may have more promise, as Toller admires her capacity for endurance. Is the cure for his soul sickness simply a meaningful personal connection with another human being? That wasn’t an option for the priest in Bresson’s masterpiece, whose commitment to the spiritual life appeared to be fundamentally self-destructive. Less extreme movies, genre pictures, actually, have conveyed powerful therapeutic themes, in which men gone psychologically ’round the bend are rescued (redeemed) by love: On Dangerous Ground, The Purple Plain. Toller remains guardedly open to Mary, but lashes out viciously at Esther, unleashing such rage as to set off psychic fire alarms. Such behavior would be unthinkable for Bresson’s Country Priest, but Toller is part of a much more openly violent age.

Some ideas in Schrader’s tale seem too schematic, or come across as retreads from his earlier work. When Toller pours pink Pepto-Bismol into his liquor, the camera zooms into the glass like the ‘clouds in my coffee’ shot from Taxi Driver. We even get nighttime driving-around shots, and angles on weapons revealed on a bed, that have ‘Travis Bickle’ written all over them. Placing Toller in opposition to an ‘evil’ polluter is a rather pat device, even if the conflict is credible — most any attempt to be altruistic in the modern world will soon be blocked by the agendas of men with profit motives.

Other elements are more original, more successful. A positive activist inspiration for Toller is the fact that First Reformed was a link in the historical Underground Railroad — church men of the past dedicated themselves to dangerous radical politics in the name of what’s right. But Toller’s awkward pitch for altruism doesn’t register with Jeffers, who cannot be ‘political’ — he has a corporate church behemoth to feed. The antiseptic monolith Abundant Life pays more attention to diverting kids with religious choirs, so they won’t join Jihads or white supremacist groups. First Reformed’s figurative landlord Balq makes it clear that he will not tolerate any activism on the part of Toller. The despoiler seems to own everything; he marginalizes dissent with PR about ecological sensitivity. The Balq logo is everywhere. It even shares ad space with Abundant Life’s logo on the day of First Reformed’s reconsecration.

I like the way that Paul Schrader pares the film’s events down to essentials. Certain items that will become key props at the conclusion are calmly introduced early on, without dropping flags saying ‘you’ll see me later.’ But Schrader also has a few clumsy moments. His worst piece of direction occurs when Toller tries to interest Jeffers in ecological activism: his boss actually swivels his chair and gives his back to our aggrieved pastor. The chair swivel is just too blunt. Cedric The Entertainer’s performance is appropriately hollow; Jeffers always talks in hushed church-speak, saying whatever will maintain the status quo. 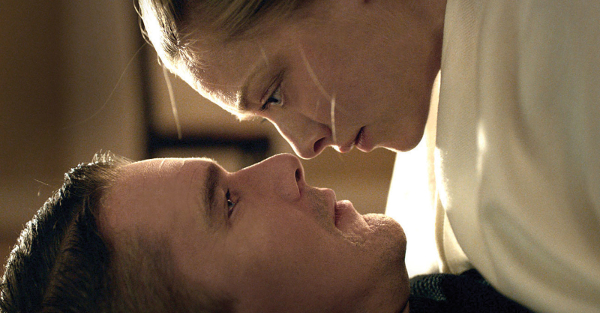 Something more inspired but not fully realized is a spiritual/fantastic sequence that we assume (?) is not meant to be taken literally. No spoilers: what I’m referencing will be immediately obvious. Just when we think we might be taking a 2001 odyssey into the secrets of the soul, Schrader opts for literal, trite imagery — Soylent Green or No Blade of Grass-lite. Schrader’s feature commentary relates this curious sequence to the soul-twisting miracle at the conclusion of Carl Theodor Dreyer’s genuinely transcendent Ordet, but there’s little comparison.

To its credit First Reformed soon has us deeply invested in what will become of Toller and Mary. Amanda Seyfried’s unhappy wife is not without a basic inner strength, which seems to fascinate Toller. Ethan Hawke’s pastor looks suitably ravaged by stomach upset and existential anxiety, yet the actor conveys his disturbance in mostly subtle ways. Will he become a stone-cold fanatic?  We fear to find out how Toller will direct his desire to act, to make a statement. The ‘Taxi Driver’- like developments near the conclusion prepare us for an unthinkable calamity. As Toller reverts to behavior suitable for a second-century martyr, Esther begins singing the hymn ‘Leaning on the Everlasting Arms’ which carries its own highly sinister cinematic connection. Unlike the exploitative holocausts in his ’70s screenplays, Paul Schrader this time goes beyond the need — commercial, personal, artistic — to take his horror show all the way to the gates of Hell. If we so wish, we can even interpret the ending as a human victory. Redemption?

Lionsgate’s Blu-ray of First Reformed does its best to recreate Robert Bresson’s austere look in color. The natural lighting allows dark rooms to sink into dankness. The flat framing is so wide that we’re not sure it was planned from the beginning — matting the picture off holding a frame line near the top would almost always result in an acceptable widescreen composition. But leaving things flat and wide further isolates the human figures in the frame, encouraging us to search for meaning in their surroundings. What Schrader might call Transcendental, we can recognize as a deliberate cinematic effect: do formal, stand-off compositions and a slow pace better communicate a spiritual context?  Adding to this sobering effect is an impressive opening shot, a long, slow smash-zoom perspective trucking shot of the title church, filmed with exacting Schrader-ian rigor.

Lionsgate’s extras clarify Schrader’s stated aims, and thus drain some of the mystery from the viewing experience. The serious, thoughtful Paul Schrader appears in both a 15-minute featurette and a full commentary, basically explaining that his film is made from many borrowed elements. He says that several years ago he was influenced by a Polish director, and decided to return to his religious, ‘transcendental’ roots. I don’t think that Schrader ever left those influences, but instead adapted them to film work that pushed exploitation into art film territory. We realize that the vast majority of today’s audience has no experience of the art films made forty, fifty and sixty years in the past: when Schrader repeatedly cuts to Toller writing in his journal, the device might feel fresh and original. Many audiences for First Reformed may indeed undergo Schrader’s intended ‘transportive’ sensation.

The package comes with a code for a digital version of the film. One must run a gauntlet of feature trailers on the disc to get to the main feature. The first three trailers are for heavy-duty horror pictures, which tips us off as to how Lionsgate’s marketers have classified Schrader’s picture!