Stanley Kubrick had a dedicated assistant, and not one who simply held the master’s cinematic paintbrushes. He staffed research, production, post-production and marketing departments all on his own. Tony Zierra’s brisk documentary teaches us much about a genius director, the assistant that devoted himself entirely to the director’s mission, and the nature of work and ambition. 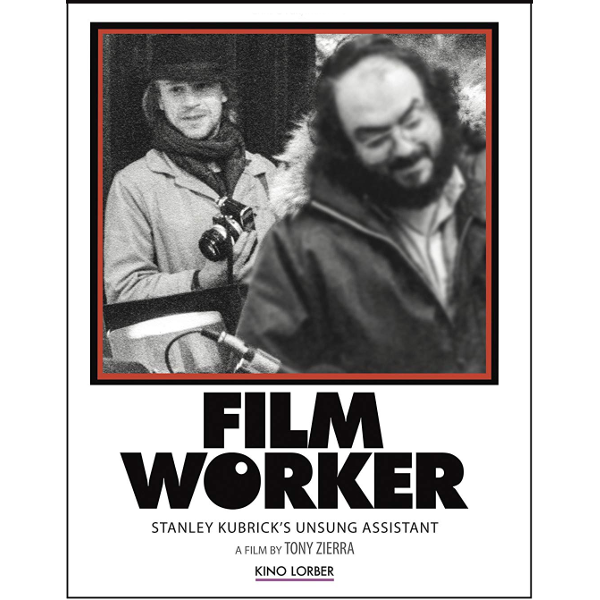 The cult of Stanley Kubrick is holding firm, and definitely widening as we learn more about his ultra meticulous lifestyle, habits and dedication to his art. He didn’t turn out many features but his filmography contains an impressive number of masterpieces. Although war themes figure strongly in almost half of his films, Kubrick moved between genres, scoring with crime thrillers, epics, literary adaptations and especially science fiction.

Not so long ago Kubrick’s life was mostly a secret. We learned that he wouldn’t fly, that he shot his intensely detailed shows in England and relied on hand-picked assistants to film pickup scenes — for example, U.S. highways for Lolita. Later in his career we heard rumors and reports that Warner Bros. gave him carte blanche in most things, allowing him to control distribution and advertising on his films in all media. Nothing went through the corporate mill; only a couple of very close, trusted associates were allowed to deal with the details. Jan Harlan was one, and an ex-actor named Leon Vitali was another.

Filmworker is a documentary about Leon Vitali, a hardworking British actor who performed for the difficult-to-please Kubrick on his masterwork Barry Lyndon. He soon quit acting to assist Kubrick in the filmmaking process. Kubrick needed the backing of studio but also liked to keep his creative contacts close, for privacy and control. Leon Vitali began as a personal assistant but was soon functioning as Kubrick’s ‘everything’: production assistant, second unit director, casting director, contact man, post-production supervisor, archive librarian, film librarian and manager, marketing manager and general factotum.

When Leon expressed doubt about embarking on unfamiliar ground, Stanley would simply tell him, ‘Oh you can do it.’ For almost thirty years Vitali served as a second pair of hands for Kubrick, doing everything from timing prints to vacuuming rooms. The job description was basically devoting one’s self 24/7 to the artistic needs and functionality of an obsessed genius. Inspired by the aura of pure unadulterated creativity within Kubrick’s personal sphere, Vitali simply ‘did what needed to be done.’

The show is carried by a full interview with Leon Vitali, backed by a platoon of actors, other Kubrick associates, family members and a few Warners executives; a couple of very active Home Video executives get into the mix as well. Fully covered are the years from Barry Lyndon through Eyes Wide Shut, right through to the end and beyond.

Vitali can’t have been paid enough to devote his body and soul to this crusade; he reports that he barely slept and had episodes of bad health. But he’s obviously inspired and fulfilled carrying out his endless creative mission. We’ve all seen it before — when the right creative opportunity arises, people will rush in to help just to be near the center of something of lasting value. Film people often find fulfillment being part of a team doing important work, even if their role is relatively minor. Leon Vitali’s situation was almost unique: in a business known for bringing together dozens of specialized workers, he performed multiple functions in relative isolation.

We of course compare Leon Vitali’s situation to our own jobs and careers. I’ve had good experiences helping various professionals, but show biz is crowded with false Kubricks, pretenders that think that one can claim genius simply by being demanding and abusing people. Leon Vitali found someone he clicked with, who inspired him to pour his life’s blood into his work. And it isn’t as if Vitali was highly paid, or received commensurate screen credit for his contributions. The portrait we get of Stanley Kubrick is of a driven creative powerhouse who worked just as hard as Vitali. Years were spent preparing projects that would be abandoned for one reason or another. His moods were all over the place — intensely thoughtful and considerate, and then cruelly belligerent when things weren’t going well. At some point most ambitious creatives become insufferable spoiled brats, and in most cases the level of talent isn’t high enough to justify the grief of putting up with it all. All the evidence points to the interpretation that but Kubrick was someone whose tirades were worth weathering. Michelanglo probably spat from on high in the Sistine Chapel, and for all we know he pushed a few assistants off the scaffold when frustrated. Half a millennium later the murals remain, and any GCD (Genius Collateral Damage) is long forgotten.

Vitali seems to have mastered a score of film trades. He tireless auditioned thousands of child actors. He had the dubious honor of timing film prints, a job that must have been impossible with Kubrick, a perfectionist who would okay nothing that wasn’t exactly right. During production Vitali would work all night with Kubrick to adjust the lighting on sets. The director was unwilling to leave that detail to his Director of Photography… who presumably got a full night’s sleep. Stanley Kubrick passed away unexpectedly after Eyes Wide Shut was filmed, but before it was completed. Without Kubrick’s authority life became all the more difficult for Leon Vitali. Warners’ must really have resented him through the previous 25 years. Studios have always functioned to exert authority (read: to push people around) and impose their version of reality on filmmakers. What use is a studio executive if he can’t bring talent to heel? I personally experienced this exact attitude in 1977, when the head of production at Columbia told us that ‘Steven Spielberg has had a couple of lucky hits, but on this film we’ll pull him into line, show him that we’re in charge.’ Like Kubrick, Spielberg was a bold exception. I saw him in the years that he learned how to leverage his industry clout. Both men were not just hit-making directors, they became institutions in their own right, too big to be controlled or intimidated.

In the end Leon Vitali comes off as a happy man. Excluded from official Stanley Kubrick celebrations and exhibits, he nevertheless visits museum displays with friends and family, happy to explain things. We see him studying a lengthy display case of Kubrick’s hand picked and sometimes personally- designed lenses. He surely knew them all by name.

Kino Lorber’s DVD of Filmworker is a well-paced documentary that holds our attention and interest throughout; Stanley Kubrick fans will find it essential viewing. Slightly worn and grizzled, the main attraction Leon Vitali convinces as a pilgrim who found his crusade. I’ve met wise and generous celebrity assistants and handlers, but also turnkey obstructionists with their own agendas, that self-aggrandize and restrict access to their employers. Before seeing this show I might thought Vitali to have some of those qualities. Now I’m a believer as well.

In addition to directing, Tony Zierra filmed the interviews and edited, with distinction. The only thing even slightly bothersome is an occasional use of a zinger dialogue line in a film clip, to finish off a thought in Leon’s narration. When teh voiceover ponders Stanley Kubrick’s sometimes- inscrutable nature, semi-animated line drawing caricatures are used to good effect.

A trailer is appended to the disc, along with a 12-minute Q&A session with Zierra and Leon Vitali taped after a screening. The title word is ‘filmworker’ but it could just as well have been ‘commitment.’ When Vitali tells us that he contributed years of unpaid labor to put Kubrick’s warehouses of files and holdings in shape, neither he nor we think he’s cheated himself. He didn’t amass a fortune, but what’s he going to take to the next world, anyway? The man found what he wanted to do, aiding a filmmaker who respected his contribution.

Another response — the show makes me want to see Stanley Kubrick’s later films all over again. Maybe this time I’ll see what everybody sees in The Shining.