Verdict? The film of August Wilson’s play is absorbing, intense. If we rate by quality of writing, acting skill, and the craft of direction, Denzel Washington’s film betters most of its fellow Best Picture nominees. It’s also something positive for the arts, a ‘black experience’ play that can’t be pigeonholed as merely black- themed. The appeal of its compelling characters goes beyond racial boundaries. Viola Davis did win a well- deserved Oscar, and this is fine work from one end to the other. 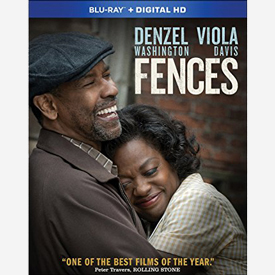 2017 is the year for envelope- fumbling at the Oscars, a trip-up that diverted attention from another big issue. One year ago, I remember reading outraged notes from an actress (Jada Pinkett Smith?) about inequity at the Oscars. Reacting to an awards season that reflected little or no African-American presence in cinema, the head of the Academy instituted a mini-revolution in the rules. Not only were scores of qualified black artists inducted onto the membership rolls, a deadwood purge was conducted of members judged irrelevant. The exact mission of the Academy has occasionally been a hot subject for debate, but the move this year was (to me) clearly intended to realign everything to make the Awards TV show — still a prime American event — younger, hipper, and more diverse: more marketable. Naysayers carped that all that is needed to make the Oscars more popular is movies that people want to see, instead of the usual parade of Oscar-bait hopefuls. Opening up the Best Picture category allowed a few more crowd-pleasing pictures in the door… which in some cases were more entertaining, even if critics sniffed at them indignantly. Being popular is not necessarily a handicap, where movies are concerned.

So this year, lo and behold, several good movies starring African-Americans jockeyed for attention at the Oscars — the high-art Moonlight, the dumbed- down but emotionally rewarding Hidden Figures, and a serious adaptation of a prestigious Broadway play. 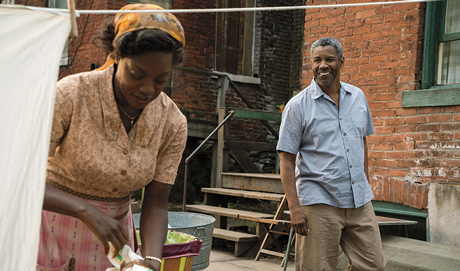 Staged and performed on an intimate human scale, Fences will be a gift to viewers unfamiliar with the work of August Wilson. The playwright’s characters and dialogue come across as true to life, and not something cobbled together to promote a point of view, the statement being made may be social, but the subject is inter-family relations, close-up. I’ve read a critic’s capsule description of this movie that could have been written by a computer. Film reviewers can sometimes feel intimidated by fine stage adaptations, or resentful of their supposed non-cinematic nature. Yet the human face is the most cinematic image of all, and a dramatic play that structures and heightens reality for the intelligent viewer can feel far truer than an objective documentary. And it’s also true that fine performers have a way of making one forget all the bad acting one has ever seen.

Director-star Denzel Washington opens up Fences just enough to place it in a replica of ‘The Hill District,’ the working-class Pittsburgh neighborhood where August Wilson set an entire series of plays. Some of the views of the hill streets resemble old illustrations by Norman Rockwell, but with race of the residents reversed. Trash collector Troy Maxon (Washington) may seem just a working stiff with an outsized ego and an abrasive attitude, but he also represents a common kind of father figure for a generation of black men who grew up in the post-war years. With far fewer options back in the 1930s, Troy saw his dream of a pro baseball career vanish. He lords it over his friends and tease/abuse his wife Rose (Viola Davis) on the supposition that he was cheated once and will forever be belligerent about it. He has already exaggerated his own story beyond the bare facts, as a conviction and a prison sentence may also be factors that cut short Troy’s baseball career. But the pain and frustration behind Troy’s braggadocio is real. Troy uses his best buddy and fellow trash collector Jim Bono (Stephen McKinley Henderson) as a sounding board.

Troy and Rose take care of his brother Gabriel (Mykelti Williamson), a brain-damaged veteran. Troy provokes near-violent confrontations with his older son Lyons (Russell Hornsby), who is always asking for money. The real pain comes into play with the younger son Cory (Jovan Adepo), a promising teen athlete. Troy puts up every roadblock he can think of to discourage Cory, making it impossible for the boy to attend practice, refusing to talk to his coach and eventually demanding that Cory either abandon sports for a practical trade, or move out. Rose does what she can but cannot make Troy see that times have changed, that the color barrier for sports is crumbling, and that Cory should be free to follow his dream. Troy makes a huge show of his one-man-against-the-world stance, but the facts speak otherwise. He seems surprised when his application for a promotion to truck driver doesn’t automatically hit a brick wall. And his superior position over Rose vanishes when circumstances force him to reveal that he’s not been faithful to her. 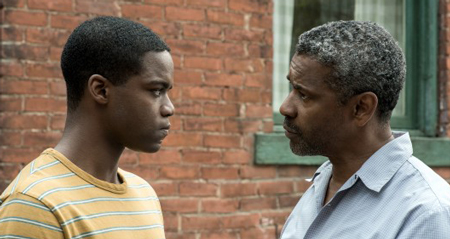 I think it was almost twenty years ago that I heard Denzel Washington praised as one of the few modern actors comparable to the great movie stars of old. He’s doing something different here, immersing himself in a ‘difficult’ character that that we recognize as wholly human. Troy Maxon is a bundle of acquired resentments, a guy who expands his personality to cover disappointments he doesn’t want to acknowledge. Rose knows him like a book but is powerless to do more than cope with him, and to try to run interference for her son. There’s not a lot of justice in the situation — in taking care of Gabriel, Troy appropriated Gabriel’s allowance from the army, and used it to buy his house. Why Gabriel does not live there, but wanders around the neighborhood, is not a subject Troy will abide. Troy only becomes a truly negative factor in terms of Cory. We see the father judging the son by his own limitations, and refusing Cory the freedom of living his own life. That’s an inadvertent generational curse. The most powerful thing in Fences is that, after all his problems, Troy isn’t a villain. Human relationships are not bound by hard logic. Everybody recognizes Troy’s strength and vitality. They like him, flaws and all.

This casual review is written from the POV of a white audience member. I was impressed that Fences did not emphasize the negative role of society, which of course is still there. The play also doesn’t expect its characters to be Super Negroes that surmount any and all obstacles by virtue of a magical black spirit. If Troy had had better luck or been born a few years later he might have become a great baseball hero. He has a big heart, but it’s been frustrated too long. We also understand Troy’s betrayal of Rose, even if we don’t approve. People that fail, or think they’ve failed, compensate in all kinds of destructive ways. Through these actors we’re given a drama that’s both specific and universal. And dramas that help people appreciate each other are a rare item indeed. 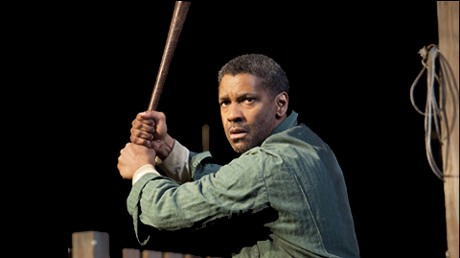 Washington’s near-faultless direction needs to be lauded as well. A scene or two of this show is spent roaming the streets, but most of it plays in Troy’s broken-down yard and meager rooms, that Rose has managed to turn into an inviting place to friends and family to gather. Washington chooses his camera angles and movements well, and in this case I can praise the fact that I was never made aware of flashy director’s touches, show-off moves or stylistic flourishes. Are some scenes done in held takes instead of cutting? I’d have to see it again to know, as I was pulled into the story too strongly to be keeping score. I was just paying attention to the people. The scenes are alive, the staging is adroit.

I’ve actually read reviews that slight Fences for not being filmed in a more dynamic style. The fashion a couple of years back was to make a show look like it’s all one unbroken take. This year some trendy pictures construct scenes out of wide, un-specific shots, with cutaways to choker close-ups, with little in between. It works well to create the fragmented world of Moonlight, but that movie barely lets us know where we are at any given time. Washington has to work with a unity of locale, and has to put us in the middle of a theatrical drama. I don’t think his method is old-fashioned; I’d call it appropriate and adept. 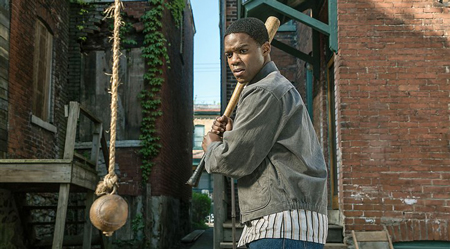 August Wilson completed a screenplay for Fences before his death in 2005, and this is what Denzel Washington filmed. Not every great play can make a great movie, but we can certainly remember those that by sheer entertainment value transcend sniping about cinematic values. I should think that Fences could popularize Wilson and prompt more adaptations of his work. After this experience I’m ready to see them, just as I’m ready to take in anything by the playwright- screenwriter Horton Foote, who wrote about an East Texas world equally unfamiliar to me. (note… there is a TV movie of August Wilson’s play The Piano Lesson, from 1995.)

Fences works toward a beautifully measured finish, with a final shot that seems serene and profound. Given time, I think that Denzel Washington’s film will grow even greater in stature.

Paramount’s Blu-ray + Digital HD of Fences is a fine encoding of this very attractive show. The widescreen image pulls us into the brickyard location of a neighborhood built on hills. (The first thing I worry about is, does Troy get good drainage there?) The HD image gives us incisive close-ups of some very expressive, attractive actors. 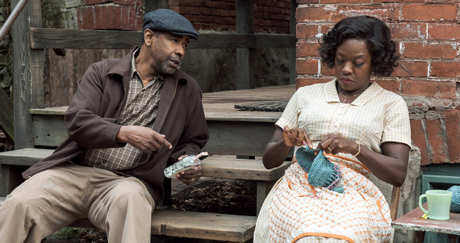 Although most of the audio track is straight dialogue, composer Marcelo Zarvos provides some moving, melancholic themes. I shudder to think of the responsibility in editing a film like this. When things don’t go together well n the average picture, an editor can cut lines, or reach for tricks that distract from the mismatches. Here everything must fit — speeches must butt right up against speeches. If the tone or pitch is off, we’ll know it right away. All of this makes us appreciate the actors more. James Earl Jones originated Troy Maxon on stage. It’s ironic that a show like Fences, that has the integrity to use many of the veteran actors from a recent stage play version, might have difficulty generating needed publicity. Sometimes I think that producers shuffle casts — substituting bigger stars here and there — just to have something to talk about, to claim an improvement was made. I like this better.

Fences’ theatrical launch was barely over three months ago, and here we have a beautiful Blu-ray. For extras Paramount provides not a making of docu (which would be counted as a new production) but several short featurettes, each on a theme. There’s a ‘stage to screen’ piece, one on the cast, one on Mr. Washington and another on Ms. Davis. A final piece on August Wilson’s Hill District is mostly about securing a good location to represent Troy’s house. We agree that they found just what was needed.

Many of the pub photos do give a somewhat skewed impression of the picture — Troy and Rose don’t share all that many loving embraces, with big smiles.