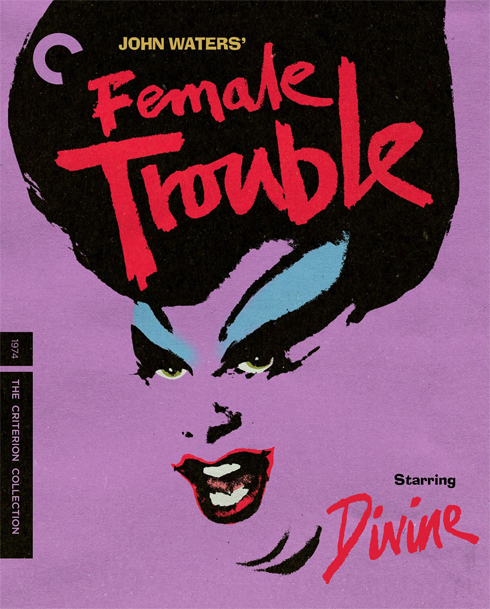 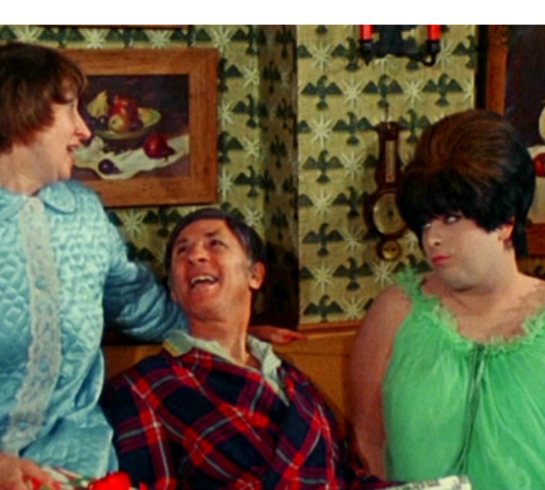 The story of one woman’s odyssey from trash-talking trouble maker to tabloid superstar, John Waters’ Female Trouble assembles a hot-tempered crew of terrorist fame whores ready for their close up – America’s Got Talent: Apocalypse Now Edition.

The astonishing Divine plays Dawn Davenport, a spiteful social climber with her heart set on a pair of cha cha heels. When Christmas arrives with no fancy footwear in sight, the brawny teenybopper propels her mom into the Douglas fir and hits the road.

The road hits back – she’s immediately assaulted by a leering factory worker (played by Divine), gives birth, works a strip club, walks the streets and mobilizes a cadre of criminally-minded floozies (“upper-echelon cat burglars”) to shake down the neighborhood.

Seduced by nihilistic fashion mavens Donald and Donna Dasher, Dawn mainlines liquid eyeliner and experiences a Genet-like epiphany – “Crime is Beauty” – and goes forth to proselytize. Armed with a Elvis in Vegas pantsuit and mohawk buzzcut, the uninhibited ingenue makes her nightclub debut rolling in raw fish, tearing phonebooks in half and executing unsteady backflips on a trampoline.

The slam-bang encore illustrates the portly diva’s conflicted relationship with her audience – screaming “I’m so fucking beautiful I can’t stand it myself!”, Dawn points a gun into the bleachers and unloads (there’s a reason this movie was dedicated to the Manson family’s Tex Watson). Being 1974, a mass shooting still manages to garner some attention – Dawn flees the scene but a determined dragnet brings her down along the frozen outskirts of Baltimore.

A swift trial follows along with the electric chair. Her work in this world complete, her last meal engorged, Dawn resigns herself to the great beauty salon in the sky.

As Waters intended, Female Trouble is a star vehicle for the cross-dressing anarchist Divine and his not-so secret identity, Glenn Milstead. A performance artist if ever there was one, Divine worked a stage far removed from the family-friendly catwalk of RuPaul’s Drag Race. In Female Trouble he transforms from bratty layabout to deranged gorgon while citing Richard Speck as his guiding light – he’s monstrously funny and more than a little bit scary. 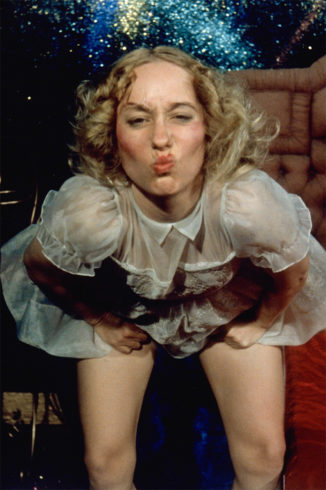 Running a close second is the unclassifiable Mink Stole who was beamed in from a holding pen at Area 51 to play Dawn’s mouthy daughter Taffy, a gonzo Lolita in baby doll skirts and crimson rouge applied like war paint.

Mink’s performance is a thing to behold, a fidgety exhibition of nonstop facial tics and mysterious impulses – her unexpected metamorphosis into a Krishna-chanting peace lover will be studied by film critics and anthropologists for years to come.

Both Divine and Mink are ably supported by the usual Waters gang of “Dreamlanders” like the startling Edith Massey as the leather-bound Ida and the eerily comatose Mary Vivian Pearce as Donna Dasher – though it’s usually Waters’ eminently quotable dialogue that seals the deal (“Why would I want to eat spaghetti? Do I look Italian?”)

John Waters’ quasi-autobiography was called Shock Value but it could just have easily been called “Nothing Sacred” – Female Trouble is the apotheosis of that vision, a love-hate screed aimed at circle-jerking celebrity worshippers. 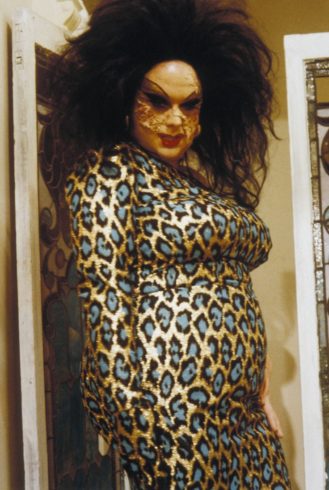 It would be a few years (Hairspray to be precise) before Waters achieved what would politely be called a “professional” technique – such mundane craftsmanship would only stifle Female Trouble anyway – the movie needs its grungy photography, chainsaw editing and histrionic emoting to find itself. Even in Waters’ chaotic universe, form follows function.

Squint hard enough and a fierce social critic can be seen peeking out of Waters’ playful depravity – case in point that scene in which the hitchhiking Divine is raped by his own alter-ego – the moment when self-loathing and narcissism merged – a cautionary forecast of things to come.

In 1974 Dawn Davenport was a local aberration, a brazen egoist whose vainglorious campaign for attention landed her in the electric chair – these days she could stand in the middle of 5th Avenue and shoot someone and she wouldn’t lose any votes.

Much like their splendid presentation of Waters’ Multiple Maniacs, Criterion has treated Female Trouble with tender loving care, going above and beyond the call of duty with an abundance of extras and a vivid 4K transfer of Waters’ criminally beautiful satire. The extras include:

A must-hear commentary from Waters recorded in 2004

A conversation between the gregarious Waters and the studious Dennis Lim, film programmer for Lincoln Center