Federico Fellini’s best non-narrative feature is an intoxicating meta-travelogue, not just of the Eternal City but the director’s idea of Rome past and present. The masterful images alternate between nostalgic vulgarity and dreamy timelessness. Criterion’s disc is a new restoration. 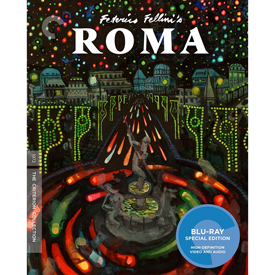 Federico Fellini stopped making standard narrative pictures after 1960’s La dolce vita; from then on his films skewed toward various forms of experimentation and expressions of his own state of mind. Most did have a story to some degree, even if subsumed under a dreamlike surface like a circus, or a poetic phantasmagoria. The magic was always there, hidden behind the eyes of Giulietta Masina and the continual play of dream-memories — “Asa nisi masa.” The themes were never difficult to discern, such as the confusion over women in Juliet of the Spirits and City of Women. And Fellini created his own kind of grandiose wonderment with history in his epics Satyricon and Amarcord. 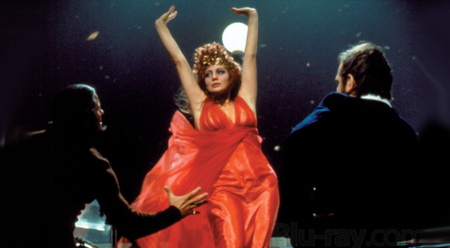 A favorite among the later works is 1972’s Fellini’s Roma. It adds a taste of artificial documentary to the Fellini style, turning every scene into a circus and all Italians into performers. As another look at his life and his beloved country, it combines more elements than one thinks could fit in two hours of film. It’s a travelogue-in-time of exotic memories, a collection of episodes that seek out the vulgar and the beautiful, the absurd and the tragic. We may see some famous buildings, but this is a travelogue of the soul, not just a city.

With just a few words of introduction at the beginning, Roma’s episodes skip across time and space. Schoolchildren learn about the beauty of ancient Rome. A film crew rolls a giant camera crane over the highways. That crane or its shadow will appear in several more episodes, reminding us that we’re seeing a highly personal reality. The episodes look like casual, almost random coverage of ‘happenings’ in Rome; but we’re also made aware of how carefully designed and planned everything is. The Rome of yesterday and today is created out of Fellini’s imagination.

A young man in a white suit (Peter Gonzales) represents Fellini coming to Rome in the late 1930s. He finds lodgings in a rooming house populated by what can only be called ‘Fellini characters,’ people that seem very real yet almost cartoonish. Plump women radiate life and warmth and the kids are nervy little troublemakers. Most everybody else falls into the category of ‘Fellini freak’ — not a freak in the negative sense but someone with an unforgettable face or exaggerated characteristic. Pasolini spent an entire film explaining the idea of a Mamma Roma, a Roman life-force woman who was both saint and prostitute. Fellini says the same thing with one visual, slowing down for a second for a calm truck-in to a large, forlorn streetwalker in some dark corner of the city.

With no main character, the film becomes an endless parade of fascinating faces and bodies. A masterful look at a street restaurant from the past sees Fellini’s roaming camera picking out what seem to be dozens of very specific personalities, giving us a chance to stare just long enough to receive an impression. A little kid sings an obscene song, and people shout out personal remarks in full view of their neighbors. Everybody eats. People say vulgar things, and then apologize politely. Seen this way Fellini’s Italy is alive and sweaty, not a confected valentine like John Ford’s imagined Ireland. 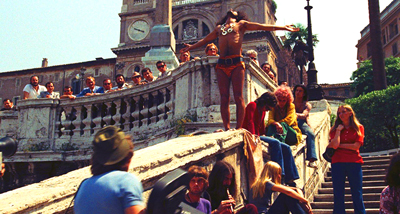 The new Rome is mechanized, loud and overrun by hippies that spend the summer camped out at the famous fountains, sleeping and washing in view of the tourists, like animals in a zoo. The police chief sends in the cops to clear them away and break some heads. Fellini’s camera crane observes a Tati-like tour bus disgorging a horde of aged American women. Handsome younger Italian men arrive to help with the picture taking. In a nighttime shot of traffic clogging some roundabout next to an ancient monument, we realize that the Coliseum is a painted backdrop. (top large picture) Again like Jacques Tati, Fellini doesn’t allow realism to get in the way of his vision. His Rome is a state of mind and an awareness of an exotic past.

This is Fellini’s version of a ‘city symphony’ documentary, like those made for Paris and Berlin. Several of these drive-around scenes imitate random shots from a lazy travelogue, but everything we see is planned, designed, costumed and acted. Odd buildings are strangely lit. Characters ordinary and strange make their impressions and move on. Some of this is reassuring and some is vaguely sinister, like Terence Stamp’s drunken visions of Rome seen from a limousine in Fellini’s Toby Dammit. 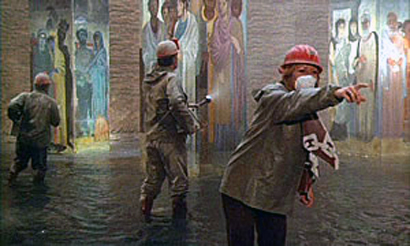 The most striking episode has the futuristic feel of a science fiction film, like Quatermass and the Pit. Subway construction is halted after the discovery of a large underground chamber sealed to the world for over 2,000 years. The mood is further ‘Hammer-ized’ by the presence of actor Marne Maitland as a city spokesman accompanying the press. When a robot-dinosaur digging device breaks the last wall, the helmeted explorers step into the world of Satyricon: a large Roman house, untouched for Millennia, with amazing statuary and walls covered with colorful frescoes. Roberto Rossellini required an hour to show Ingrid Bergman moved by the power of ancient art in Naples — an effect Fellini accomplishes in about fifteen seconds. Then something happens to restore the barrier of he ages, as if a time portal were closing. The sequence relates science fiction to the human condition, specifically our inability as a species to ‘remember’ history as part of ourselves. I always assumed that this sequence was filmed in some real subterranean construction site, but no, it’s all a fantastic, realistic set. Amazing.

More ‘earthy’ segments see Romans attending a typical movie, and a variety show where the audience is more vocal than the sad-sack artistes on the stage. Reality breaks in when an air raid is called. In a touching moment, we meet a young German performer concerned about her husband, fighting in Russia. The entirety of the home-front war experience is contained in a single visual: an ominous tunnel transforms a running woman and a speeding ambulance into elongated shadows that seem to reach back into history.

The adult section of the movie goes beyond the merely vulgar, to take a tour of the reception rooms of two Roman brothels. One is for the common man and another for high-toned clientele, as seen briefly at the beginning of Antonio Pietrangeli’s Adua e le compagne. Brazen prostitutes strut about flaunting their wares, making obscene gestures and giving the clientele the big come-on. ‘Fellini women’ all, they’re quite a collection of flesh, with the fattest seemingly the most popular. Fellini shows a brief pause as some V.I.P. is hustled through. As he does throughout the movie, he also shows the ‘down’ moments, with indecisive men hanging about, or the prostitutes at rest, like bored performers waiting for the curtain to go up. Just twenty years before this was the norm. Men took their sons to these ‘churches’ for the Double Standard between the sexes. Fellini doesn’t judge but he’s clearly dazzled by the exoticism of it all. 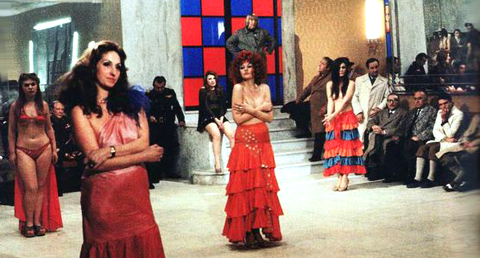 The final large set piece is both controversial and benign — a four-star fashion show at the Vatican, where models parade and prance on a catwalk to terrific Nino Rota music. Novice nuns show off sleek habits, and the Pope is at the center of a glittering universe presented like a Ziegfeld spectacular. The Church is likened to a show, a special effect, a heavenly hierarchy of sartorial grandiosity. It certainly expresses the power, riches and separateness of The Vatican, without seeming anything more than light satire.

The show concludes with more street scenes that include brief bits with celebrities mingling with the commoners. Visitor Gore Vidal speaks of the city (dubbed in Italian, on this disc). Fellini confects a hi-there with Anna Magnani as she enters her house, politely not inviting the unseen director inside. More ominous is a finale with dozens of motorcycles roaring through Rome in the dead of night, with a roar on the soundtrack and no message beyond the comparison of the ancient & human to the new & mechanistic. Is it a nightmare, or just a modern take on a triumphal parade from the Roman past? They eventually do roar away into the darkness, to our relief.

Fellini is certainly a great communicator of feelings and thoughts through cinema. His show has no central character yet is still warm and inviting. Seeing how the film is put together doesn’t tell us how Fellini made it happen — his long takes overpower us with arresting people entering, exiting, always seeming natural yet hitting cues with pinpoint precision. Fellini’s image as a film genius is fully supported by pictures like this one. 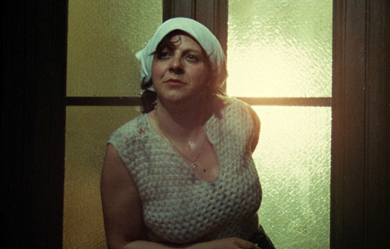 The Criterion Collection’s Blu-ray of Fellini’s Roma is an excellent encoding of a recent restoration. The film quality blows away early DVDs; I remember old video copies at MGM that were just terrible.

We’re informed that Fellini cut the picture by eight minutes for his International Version, which also became the official version, with just one reference print kept of the original. Those eight minutes, which include ‘interview’ scenes with Marcello Mastroianni and Alberto Sordi, are included as an extra.

Frank Burke’s audio commentary gets deep into every scene, commenting on details but also the ‘big picture’ of Roma as a Fellini masterpiece. Less focused are two new interviews with director Paolo Sorrentino (Youth, 2015) and Fellini associate Valerio Magrelli, who offers his memories and anecdotes of the great director. David Forgacs’ essay is presented on one of Criterion’s foldout inserts.

Roma is a strong personal memory for me, from the few weeks that I was an assistant manager at Mann’s Santa Monica Theater on Wilshire, around 17th street. The locals that season came to see a real mixed bag of pictures, like Avanti!, Across 110th Street, The Wrath of God and an unwatchable 3-D porn show called Prison Girls. Several nights in a row Roma played to an almost empty theater. The music in the fashion show sequence really got to me, and the subway excavation episode only improved with my third viewing. It was kind of creepy closing up after a rainy night, with the midnight custodians giving me dirty looks as they entered. They knew that I was collecting coins from the front of the theater… with its sloped concrete floor, a dropped coin would roll all the way down to the front of the screen, where I scooped them up off the grimy floor. It’ll be a good detail for Erickson’s Los Angeles.