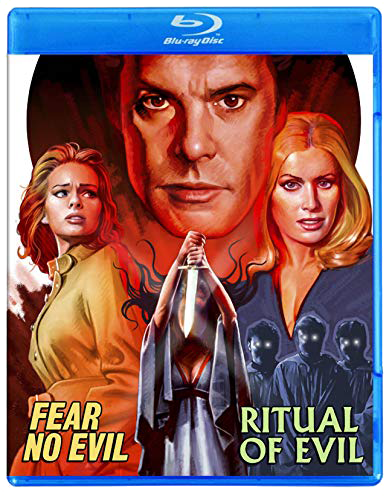 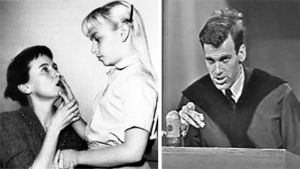 Just as she hops into bed with Charles Aznavour in Shoot the Piano Player, Michèle Mercier exclaims, “Television is a cinema that you can see at home.” Et voilà—from Michèle’s lips to Studio City’s ear, Hollywood responded with a new kind of home entertainment, movies made exclusively for TV. The first examples of this awkward hybrid began to appear in the mid-sixties, but it wasn’t the first time the small-screen tried to expand its horizons; CBS beat movie studios to the punch with Playhouse 90‘s original productions of The Miracle Worker in 1957 and Judgment at Nuremberg in 1959. And there was the occasional holiday treat like NBC’s The Pied Piper of Hamelin starring Van Johnson and Claude Rains—the network broadcast it in color with a print made by the Technicolor lab—quite an extravagance for the predominantly black and white landscape of 1957.

The first wave of TV movies began in earnest in 1964 with See How They Run, starring John Forsythe and directed by David Lowell Rich—the review in The Los Angeles Times sneered, “Movie Experiment Stumbles in First Try.” Though Rich’s “experiment” featured a top-notch cast and crew, many of those 90 minute efforts got a bad rap and for good reason—actors trapped in claustrophobic sets lit like operating rooms and directed like an afternoon soap opera did not make for scintillating entertainment. When one of these productions got a little too close to the theatrical experience, like Don Siegel’s The Killers, the studio punted it to movie houses (“too violent”). 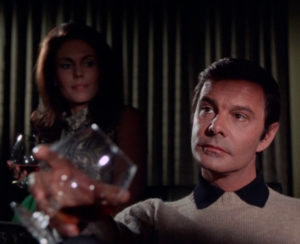 Thanks to good ratings the format refused to go away and exceptional work began to thrive, sometimes with material that was simply too quirky or esoteric for the big studios to contemplate (shades of Netflix). Both Sally Field, in Daniel Petrie’s Sybil, and Kurt Russell, in John Carpenter’s Elvis, gave scorching, career-best performances. Not to mention Steven Spielberg’s Duel, part Road Warrior and part, well, Jaws. Some of these films, like The Night Stalker, were in fact pilots masquerading as a standard TV movie. Such was the case with 1969’s Fear No Evil, directed by Paul Wendkos and starring Louis Jourdan as David Sorrell, a psychiatrist with a side practice in the occult. The following year it spawned a sequel directed by Robert Day, Ritual of Evil, and Kino Lorber’s new Blu ray brings them back to where they both belong—your living room. 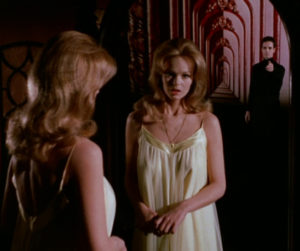 Armed with a working knowledge of the supernatural, the urbane Sorrell—no superstitious fellow he—presumes that most of his patients with otherworldly complaints are more emotionally disturbed than victims of black magic—at least that’s his initial diagnosis of Barbara Anholt, a gorgeous bride-to-be played by Lynda Day. Barbara has just lost her fiancé in a car accident but nevertheless she claims to still be in contact with her dead beau via a supernatural portal, the ornate mirror that looms over her bedroom. The implication, unusual for 1969’s television code, is that the couple are not just getting together for idle chit-chat but are in fact continuing their sex life from beyond the grave. 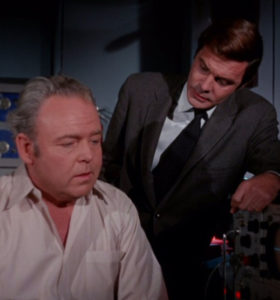 Jourdan’s suave, understated playing (he’s like a less-creepy Hugh Hefner) keeps this tidy thriller on its feet and Carroll O’Connor shines as a duplicitous lab rat—his amiable but deadly scientist might be a bow to Niall MacGinnis’s turn in Curse of the Demon. Bradford Dillman is the husband who just can’t let go—even if he’s dead and buried—and his satanic profile is a reminder of that other husband from hell, John Cassavetes in Rosemary’s Baby. Marsha Hunt plays Dillman’s mother, Mrs. Varney, an oleaginous version of Brooklyn’s own devil-worshipper Minnie Castevet (the storied Ms. Hunt is still with us at 103). And a special shout-out to the show’s cinematographer Andrew J. McIntyre—he gives the film a hyper-real look with an incredibly vivid palette—primary colors never looked so sinister. 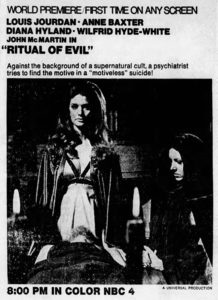 Though there is nothing new under the sun—possessed mirrors have been a steady horror film device for decades, from Dead of Night to Repulsion to Candyman—Fear of Evil gets the job done. Which makes the follow up, Ritual of Evil, even more of a downer. All the qualities that made Dr. Sorrell’s first adventure so compelling are turned on their head or dismissed out of hand. Sorrell is treating, once again, a young woman whose dreams of a satanic sacrifice are a little too real thanks to a knife-happy band of acolytes who are more interested in earthly pleasures than the supernatural.

The sequel also exposed the weakness that may have sent this show back to the phantom zone, the notion of a psychiatrist backing into a new occult menace each week was too implausible, let alone it’s only the second time out and they’re already repeating plot points (The Night Stalker solved that problem by incorporating such far-fetched circumstances into the comedy).

Kudos to Kino for thinking outside the box—their new Blu ray puts both films together on the same disc and they look smashing, particularly Fear No Evil. Extras include a commentary from screenwriter Gary Gerani, an image gallery and trailers for the features.

It’d be a pleasure to have more Made for TV product released with such care, including such forward thinking productions as Lamont Johnson’s My Sweet Charlie or Elizabeth Montgomery’s lacerating A Case of Rape. These days, “Made for TV” has taken on a more poignant meaning as studios, panicked by empty movie theaters, bit the bullet and allowed their summer blockbusters—decidedly not made for TV—to premiere in living rooms equipped with 24 inch flatscreens. I don’t think that’s what Michèle Mercier had in mind.