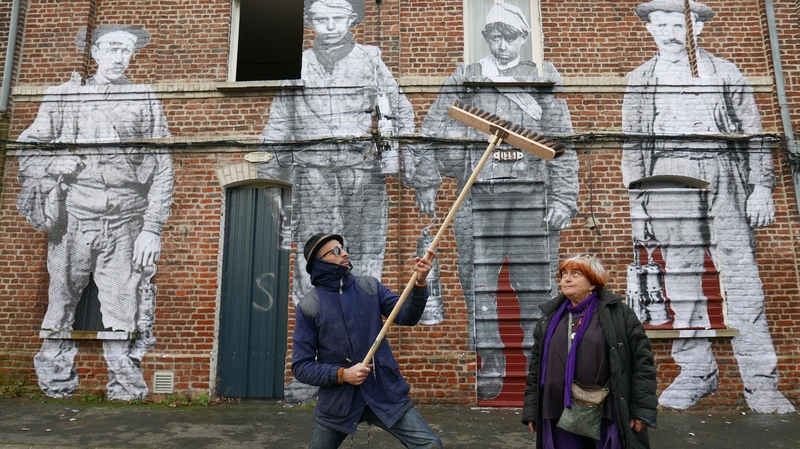 “Art should surprise us.” – worker at a salt processing plant upon leaving his shift and discovering a giant photographed mural of his coworkers adorning a wall outside the facility, in Faces Places

If Faces Places, the latest documentary from French Nouvelle Vague legend (some call her the Grandmother of the French New Wave) Agnès Varda, has anything up its sleeve, it is the capacity to surprise. The film, known in its native language as Visages Villages, was made in collaboration with the Parisian street artist/photographer JR, took prizes for Best Documentary from the Cannes Film Festival as well as just about every American film critics association, and it is in serious contention two weeks from now to walk away with an Oscar. Varda, at 89, is already the oldest Oscar nominee in the history of AMPAS, and she might end up being the oldest winner too– not that she, as befits a maverick of one of cinema’s most influential movements, gives much of a rip about such a landmark one way or another—“I’m just saying I’m not dead yet,” she remarked on the occasion of learning of her Oscar nomination. 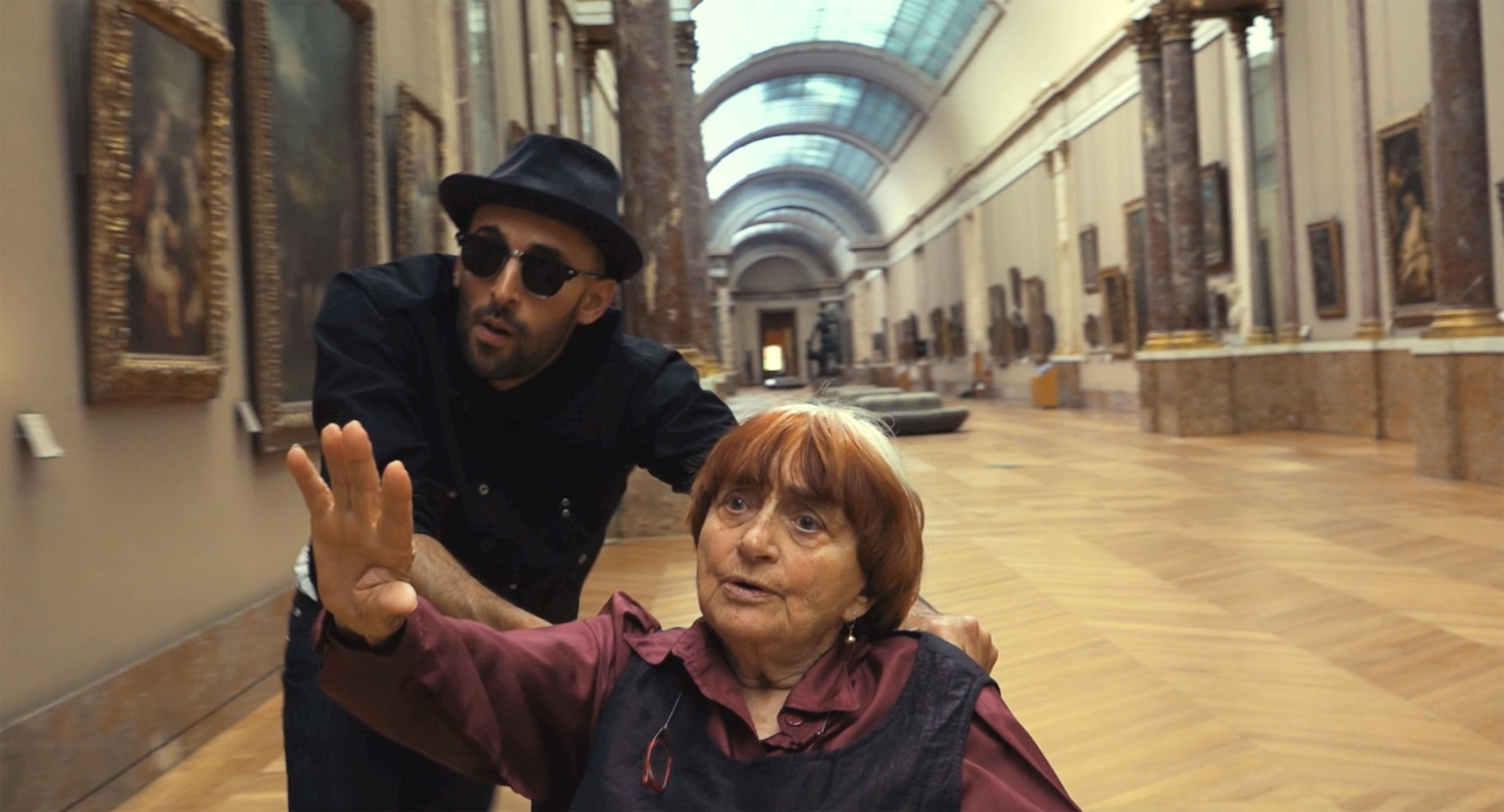 At 89, she is, of course, not as ambulatory as she once was, but even making her way with a cane across the fields and cobbled landscapes of her native country, with occasional respite in a wheelchair or on the nearest available bench, she still cuts a magnificent figure from which the long shadow of her career originates in the setting sun. That setting sun looms large on the horizon of the film, as it must, but its only one element in the design of Faces Places, a movie about memory and memorial that has the capacity to bring viewers (at least this one) to joyous tears with the power of first glimpsing, courtesy of a perfectly crafted cut, the audacious imagery conjured by JR, the way Varda contextualizes and enriches that imagery, and the effect it has on the people who live, experience, and are dignified and celebrated by it. 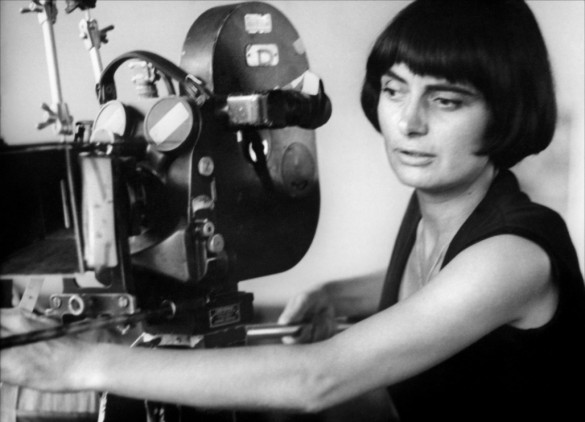 And it’s that spirit of celebration, of honoring the skills and sensibilities of the people who populate those French villages, that makes Faces Places consistently, delightfully surprising. The film is simultaneously a sort of touring art show—Varda and JR are in search of interesting working-class people with mundane, yet inherently fascinating stories to tell, and surfaces (walls, water towers, barns, et al) which can be used for JR’s particular brand of striking, transient commemoration—and buddy-buddy road movie, complete with comic jabs, frustrations, philosophical discussions, reverie and unexpected emotion. They travel the rural surroundings in JR’s van, which has been painted and sculpted to resemble a camera on wheels. That van houses a photo booth which spits out large-format photographs of the subjects who volunteer their visages to Varda’s and JR’s care. Their central purpose:  to amplify the presence of people whose existence may verge on the anonymous but who occupy a central position in the beating heart of a country most prominently defined by its Parisian counterparts, and from that purpose Faces Places gracefully worms its way into the halls of memory, even into the meaning of the burgeoning friendship between the two artists separated in age by several decades and an unknowable gulf of experience. 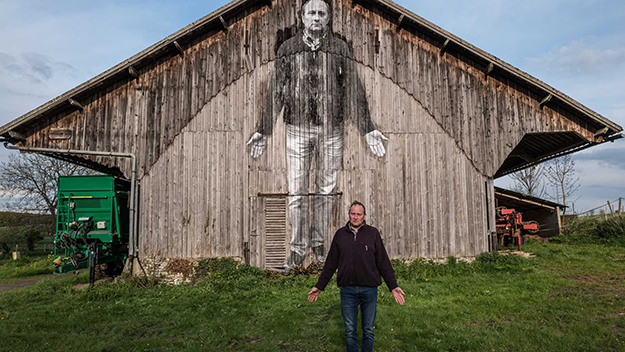 And those impermanent creations are glorious. One woman, a self-described survivor, the last resident in a vacant row of houses slated for demolition, emerges from her door to see a sober portrait of herself now part of the very building she hopes to somehow preserve, and is overcome with emotion. A mailman sees himself and his daily work, in which he revels, honored with a 20-foot recreation of himself, his hands extended as if bearing the gifts of his posts, and placed by JR precisely so that those hands seems to be holding open a window on the façade from which a woman peers with delight at the happy giant presiding over her. Even Varda becomes part of JR’s art, isolated images of her feet and her unmistakable eyes taking us, and her, into unexplored avenues of understanding and practical contact with further and unknown faces and places. (Regarding the splendiferous sight of the director’s eyes, rendered magnificently large and pasted onto a pair of train cars, JR observes that “This train will go places you have never been,” thus crystalizing the film’s purpose, effect, and resonance.) 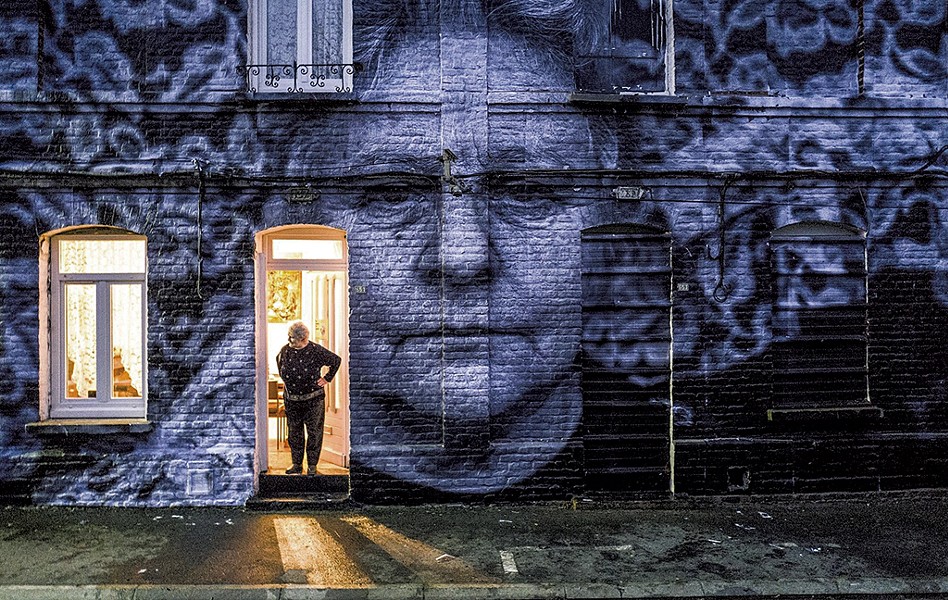 Of course, part of the movie’s terrain, as it has been with many of the director’s late-period documentaries such as The Gleaners and I and The Beaches of Agnès, is Varda’s experience, her memories of Jacques Demy, her late husband and director of The Umbrellas of Cherbourg, and of fellow artists like pioneering photographer Henri Cartier-Bresson (whose burial place in an unassuming cemetery overgrown with weeds, is one of the pair’s destinations); fashion photographer Guy Bourdin, whose image, adapted from a 60-year-old photograph taken by Varda herself, is rejiggered into the movie’s most impermanent image (and one of its most potent visual metaphors); and, of course, Anna Karina and Jean-Luc Godard, friends and peers of Varda and Demy, in their shattering and reshaping of cinema history in the late ‘50s and early ‘60s. In the last third of Faces Places Godard’s shadow, or perhaps more accurately his ineffable spirit, like intangible mist, begins to hover over Varda’s narrative and her wistful recall. She notices, seemingly almost at the same time we do, JR’s physical resemblance to Godard—JR is never seen without his signature hat and, most significantly (and to Varda, annoyingly) sunglasses. Even his pseudonymous identification echoes Godard’s familiar initials, JLG.

And Godard himself, an old friend about whom Varda guardedly hints at both times of great happiness (she shows JR an early film she shot of Godard and Karina gamboling beside the Seine, looking like love-besotted silent film stars) and the sort of rifts and separations that can mark friendships that span 60 or 70 years, manages to, in a manner, refashion Faces Places itself into his own image, playing the ever-present imp, tweaking the narrative of Varda’s film in absentia like a petulant sibling who must, in the end, have his own way. The riddles, painted on a window pane in code known only to the two directors and left by Godard for Varda to tearfully consider, lead to the movie’s minor-key epiphany of revelation and trust. So, JLG, all is forgiven. As it should be, Agnès and JR get the last word.

We so often talk about seeing films in theaters as communal experiences, and usually that simply means sitting in the same auditorium with a couple hundred people, or maybe just 15 or 20, as it was when I saw Faces Places yesterday, absorbing their reactions, sometimes subliminally, sometimes not—and sometimes putting up with distracting annoyances as well. But “communal” means something specific and different in the terms of Faces Places, even so far as that description trickled down to my own often-audible emotional response to the film itself, directly communicating with those who were sit seated around me as the final strains of the music over the end credits rang through the room and faded away. The woman seated on the row ahead of me and to my right let out a pronounced sigh, which I quickly affirmed. While expressing how much she wanted to come back and see it the next day, she noticed the tears that were still running down my cheeks and admitted that she was having the same problem. The couple sitting one row ahead on my right joined in expressing their happiness, their wonder about the film, and after a short bit of conversation the second woman told me how much she appreciated hearing me laugh throughout. I could only respond that I was grateful my crying was a lot less noisy. 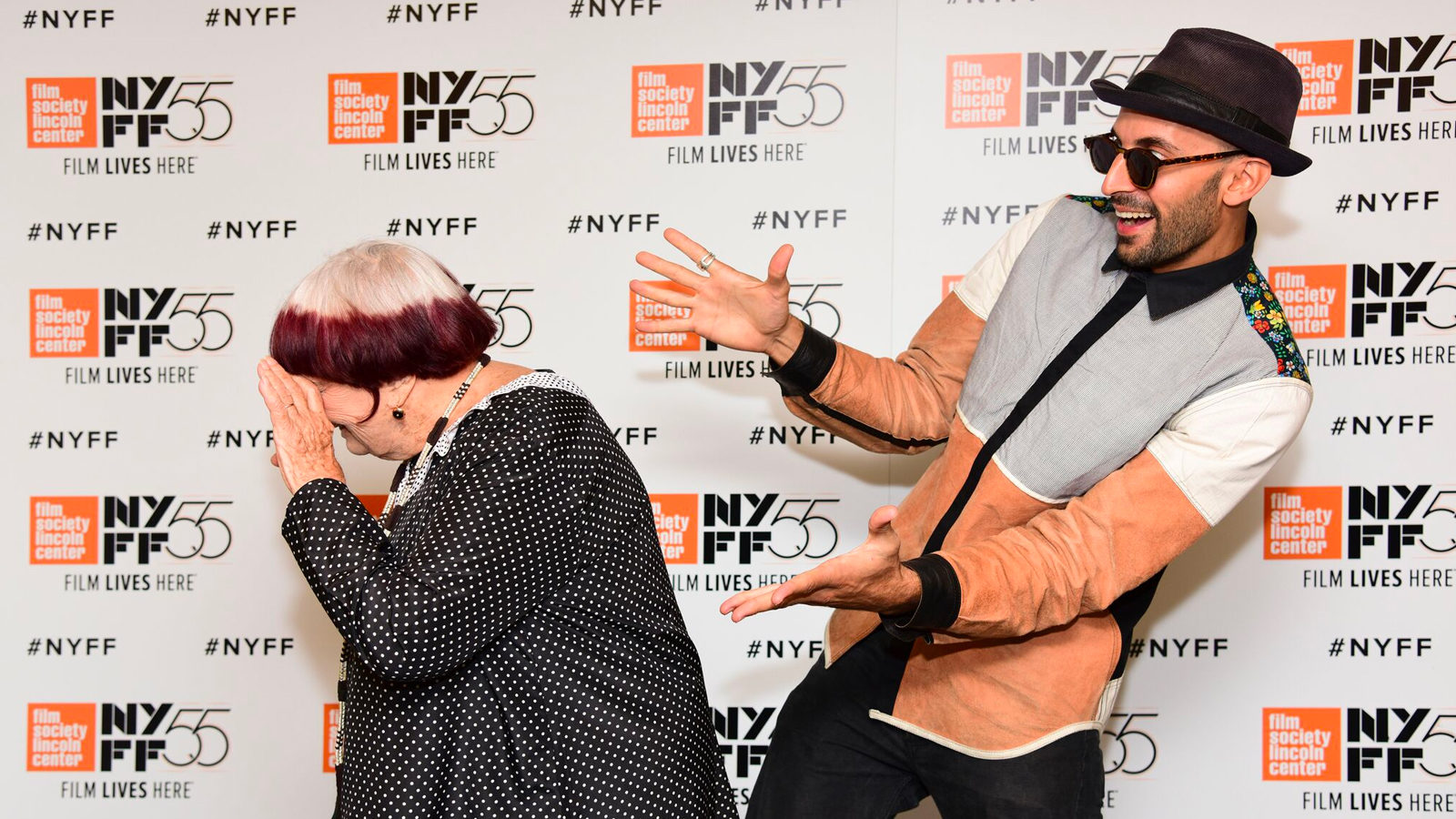 That salt plant worker is right. Art should surprise us, challenge us. And when it does, as the resonant simplicity of Faces Places so often does, it can serve to make the world seem like a much smaller, friendlier, more concerned place than it might appear to be when we emerge from the theater into the comparatively harsh light of day. Fortunately, Varda and JR’s art tour through France, experienced in the dark, radiates beyond the dark confines of the cinema. It is cheerful, complicated, subtle; conflicted with memory but alive with the hope of reconciliation; fully conscious of the capability of folks from different classes and backgrounds to show a genuine interest in each other; bright, but with a healthy respect for the long cast of shadow, just like the world outside could be.

Leading up to Oscar Night, it’s Muriel Awards season again, the only awards that really matter. (Right? Right!) This is, if I am not mistaken, the 10th year of these awards, commissioned and managed and so-named (after his beloved, late pet guinea pig) by consummate movie fan Paul Clark. In addition to participating in the balloting, which differs considerably in its categorial assignations from the Academy and most other critical groups, what I love most about the Muriels is how writer-centric Clark has ensured that the whole enterprise ends up being. Each category comes with a well-written and considered piece from one of the cadre of fine, if less immediately known, critical voices that have been part and parcel of the Muriel Awards since their inception. This year features some new voices to enrich this already inclusive group, and they’re already at it. (I’ve got one coming up later in the week.) Clark began on Friday, after a brief introduction, trickling out word of the winners, and each day over the coming week will see new categories of Muriel winners announced, up until Sunday, February 25, a day which will be dedicated to multiple postings counting down the road to the Muriels winner for best movie of 2017.

I would encourage you to follow the Muriels progress all week by clicking on the Muriels home page for the latest updates. But for now, here are the Muriels as they have shaped up so far, as of 7:45 a.m. Sunday, February 18. I offer you the categories only; you’ll have to click to see the winners for yourself, each one perhaps a surprise that even Agnès Varda would appreciate. And who knows? Maybe Varda herself will end up being the oldest Muriel winner too. (Though I suspect the ghost of Manoel De Oliveira might have something to say about that).