The chase is on: a mix of icy ruthlessness and warm romanticism enliven Ken Follett’s novel of pre-invasion esponage intrigue. Kate Nelligan heats up the screen with Donald Sutherland, the ‘seventies most unlikely sex star. Plus a lush and wondrous music score by Miklos Rozsa. 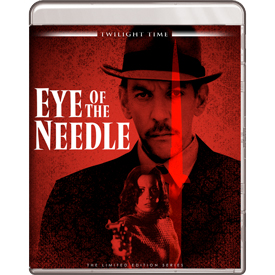 We’re all familiar with this kind of thriller — over shots of fresh-faced troops moving off to war, a portentous scrolling text tells us about the desperate situation of London — and the Free World — as Hitler’s Luftwaffe threatens. For the rest of the show, a poor Scotland Yard investigator repeatedly listens to similar exposition hailstorms: if the world is to be saved from catastrophe, he must capture a singularly slippery rogue Nazi agent.

Ah, but there’s a difference between the average ‘D-Day secret’ thriller and director Richard Marquand’s 1981 Eye of the Needle. Most of the movie is played from the POV of the Nazi spy. The deadly fugitive’s ruthless efficiency is surpassed only by Edward Fox’s paid assassin in Fred Zinnemann’s The Day of the Jackal (1973). Secondly, our villain fills the definition of Charlie Chaplin’s “Killer with a Heart“: the ultimate assassin-spy proves to have one key vulnerability.

For his murderous skill with a stiletto, ace German spy Heinrich Faber (Donald Sutherland) has been given the code name ‘The Needle’. He’s dispatched to Scotland to verify aerial photos of General Patton’s D-Day invasion force gearing up on the coast of East Anglia. Heinrich discovers fake airplanes and empty buildings, but has difficulty getting this vital news back to Germany. He’s detected by the Home Guard and Inspector Godliman of the Yard (Ian Bannen) is soon on his trail. His backup secondary agent captured, Heinrich must steal and kill as he races across Scotland to reach his submarine pick-up point. Gale winds force his stolen boat onto the rocks of Storm Island, where a rather sad family of shepherds takes him in. Four years ago on their honeymoon Lucy and her husband David (Kate Nelligan & Christopher Cazenove) crashed their car, ending his career as a RAF pilot. Kate is going stir-crazy in this remote place because her crippled husband is bitter and forbidding. Her young son Jo (Jonathan Nicholas Haley) can only provide Kate so much comfort, and when she sees the shipwreck survivor, something clicks. Heinrich soon realizes that conditions are excellent to connect with the German sub waiting just off shore for the signal to surface and pick him up. His usual M.O. is to murder anybody and everybody that has seen his face. Will that be necessary this time?

Perhaps Richard Marquand is a superb director, or maybe it’s just a happy confluence of excellent actors with an unbreakable script, but Eye of the Needle captures the essence of its drama. In the tradition of Day of the Jackal and The One that Got Away we’re soon rooting for the German agent who makes no mistakes and leaves no living witnesses. The eccentric but likeable Sutherland sticks to his mission at all times, the meek look on his face masking lethal talents and excellent judgment. So many lame, pointless movies have been made about this kind of male identification figure that we’re surprised to see one that works so well — the show maintains a constant tension between wanting The Needle to succeed and hoping that he’ll be exterminated. 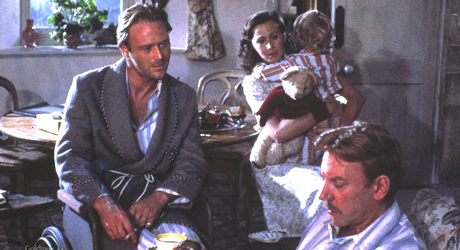 Superb stage actress Kate Nelligan made an impressive string of features yet never became a star. She lends class and heat to John Badham’s 1979 version of Dracula. Many Americans caught her fine performance in the 1980 Masterpiece Theater miniseries Thérèse Raquin, a terrific show that needs to be seen again. She won her share of roles in films that should have launched her into the top rank of stardom. Nelligan is also very affecting in 1983’s Without a Trace, as another young mother in desperate straits. In Eye of the Needle she succeeds completely with a difficult role. Kate sleeps with the half-drowned Heinrich just a day after meeting him, yet the way the material is played, her actions seem entirely understandable. Her frustrated sensuality and Heinrich’s own repressed humanity spark instant flames. Marquand, Nelligan and Sutherland put considerable heat into these scenes, which are further amplified by the exotic location. When the rain pours down, that stone house atop the sea cliff is a strong inducement for intimate human contact. Nelligan is both yielding and strong-minded. Sutherland is once again the ‘who’d of thunk it?’ torrid lover, as he was opposite Julie Christie in the moody horror mystery Don’t Look Now.

The storyline eventually gets down to a claustrophobic face-off between Kate and the man from the sea. Kate is horrified to discover what her amorous guest is really up to. Heinrich’s ability to separate his professional duties from his personal life keeps him on task. But Heinrich also gives Kate an opening to survive, something he has so far allowed no one. Is it perhaps his expression of ‘true love?’ When Kate fights back it’s not out of revenge or feminist empowerment, but a frenzied near-panic. This is high-quality thriller entertainment. 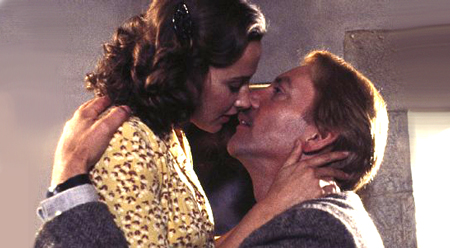 Complementing the restricted options on Storm Island — two cottages and barely any contact with the outside world — are convincing scenes of Inspector Godliman’s stumbling progress. For an opening set during the Battle of Britain, Marquand and his production staff mount big crowd scenes at a railroad hub. The Needle’s flight across Scotland sees him dispatching pursuers left and right while on the move by train, motorcycle and hitchhike. The beautiful but harsh Isle of Mull stands in for author Follett’s Storm Island. Considering the level of realism maintained throughout, we’re surprised to see the show using anachronistic helicopters, as did the near-fantasy escapist war epic Where Eagles Dare.

Christopher Cazenove is appropriately bitter and abusive as the husband with the injured legs and warped personality. In small parts are Bill Nighy, who is just starting out his feature career, and actor Sam Kydd, putting in his final film performance. Young Philip Martin Brown plays a serviceman who remembers Heinrich Faber’s face and is therefore Godliman’s best hope for capturing the spy. But Faber is just too smart for all of them. One apparent mistake is probably not a mistake at all. Heinrich Faber slays with his stiletto yet never spills a single drop of blood on himself. Is it a special technique? I suppose that’s why they call him The Needle. ‘Pardon me, would you put this absorbent cloth on your stomach so I can stab you? Thanks ever so.”

The IMDB details an alternate, extended final scene (spoiler) which may or may not be more satisfying than the somewhat abrupt finish carried by all versions of the film that I have seen, including this disc: “In the last scene, the helicopter arrives and lands, there is a conversation with the commander about the radio transmission being interrupted and finally the child arrives and reunites with his mother.” I guess that finish was considered too conventional, but it might have felt nice to see the brave Kate and the persevering Godliman enjoy a moment of relief.

The Twilight Time Blu-ray of Eye of the Needle is a big improvement over older DVDs and cable versions — the film’s dark, foggy surface once came off as dank and murky in standard NTSC scans. HD’s contrast range and sharpness allows us to appreciate the nuances in Alan Hume’s sensitive camerawork. We also appreciate Wilfred Shingleton’s production design, especially the neighboring lighthouse that reminds us of the mystery windmill in Hitchcock’s Foreign Correspondent.

TT offers an extra bargain with its Isolated Score Track for Miklos Rozsa’s penultimate feature score, an appropriately lush and emotional backing for Kate’s dilemma. Music expert Jon Burlingame is on hand on the feature commentary with Julie Kirgo and hosted by Nick Redman, remarking on the film’s transformation of familiar spy situations into something more memorable. Kirgo’s insert liner notes delve into the Rozsa connection as well as the genre and romantic angles.