Is this not the most brilliant screenplay from 2015?  Alex Garland assembles a perfect fable about robots, artificial intelligence and the hubris of a software genius who thinks he’s a God. Garland’s direction is tops as well, as is the acting of Oscar Isaac, Domhnall Gleeson and Alicia Vikander. When did I realize I was seeing a killer diller Sci-fi winner? He had me as soon as I saw that house. This is the movie with the sexy see-through robot. The question not asked but that every male viewer is thinking is, ‘could I have sex with that?’ 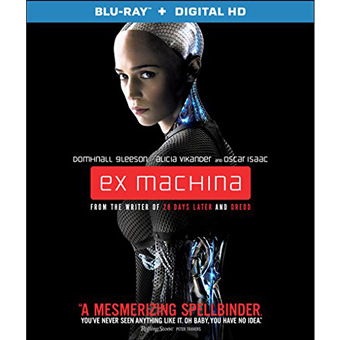 The smartest, richest and most satisfying science fiction movie in years is Ex Machina, a sleek and slick A.I. – robotics tale from Alex Garland, the writer of the genre winner 28 Days Later and the moody & downbeat Never Let Me Go. Garland knocks the ball out of the park with his first directing assignment. Besides his flawless screenplay, the film has a firm grip on a refreshing, convincing futuristic look and feel. By now, people who saw the film on its initial release or its disc release last July, have surely told you that the movie has several really good twists. As they aren’t cheap tricks, I’d call them elegant narrative surprises. I may be the last interested party to see Ex Machina but I’ll still steer my remarks away from spoilers.

In a culture saturated with comic-book fantasy, the newer sci-fi films that really make the grade for Savant are few and far between. This beats Gravity and is just as essential as Children of Men. Skipping even Avatar, the next worthy picture in my pantheon is 1995’s Gattaca. 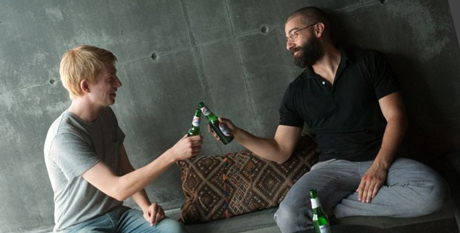 Garland sets his story within the power structure of The Blue Book Corporation, a revolutionary search engine company. Mid-level programmer Caleb (Domhnall Gleeson of Brooklyn, Star Wars VII The Force Awakens and The Revenant not a bad year) wins a company lottery, the prize being to spend a week in the remote Canadian research retreat of Blue Book’s founder, Nathan (Oscar Isaac of Star Wars VII The Force Awakens, Inside Llewen Davis and A Most Violent Year). Nathan lives in a spectacularly advanced house-fortress featuring impressive security and monitoring systems. He greets Caleb warmly but reveals a domineering edge — he’s still the big boss and holds all the cards. Caleb is flattered to learn that the lottery was faked, and that Nathan has actually chosen him to be the first to see a new invention, described initially as an Artificial Intelligence. Nathan wants him to interact with it and determine for himself that it meets the criteria as a separate, conscious thinking entity. Caleb expects to be talking to a computer program. To his surprise he meets Ava (Alicia Vikander of The Danish Girl), a robotic woman who does indeed appear to be an independent thinking personality. But there are many things Nathan doesn’t explain to Caleb’s satisfaction. Ava is kept in her own compartment, and Caleb must talk to her through glass. Caleb’s security pass only lets him into certain rooms. Caleb assumes that the surveillance-fixated Nathan is recording and observing everything that happens, but odd power outages give Ava and Caleb moments of privacy in which they can speak ‘off the record.’ Nathan seems more interested in Caleb’s personal praise than he does his thoughts about AI. Caleb begins to think that Nathan hasn’t disclosed the real reason for his visit.

Ex Machina is God’s gift to idea-starved science fiction fans. It engages us from the first scene and takes nary a misstep through its entire 108 minutes. It’s been compared to Frankenstein, and of course the 101 previous films about robots so complex that they can pass for human. The Biblical references are rewarding as well. Alex Garland keeps our attention with two effective strategies. First, the script convincingly sketches the software development mainstream, where advances come so fast that present-day ‘toys’ are science fiction miracles, and almost anything might be just around the corner. Second, when Caleb wants to know the ‘how’ of Ava, how she was constructed, etc. Nathan says that he isn’t going to tell him anything. We accept that we’ve entered the most advanced science lab on Earth; we’re also happy to know that 50% of the film isn’t going to be discussions of technological nuts and bolts. 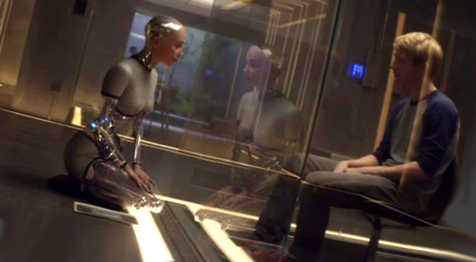 The futurism is pretty advanced here. Nathan has accomplished as many scientific breakthroughs as old Dr. Morbius out on Altair-4 — things that look like entire new technologies. There’s a ‘New Flesh’ that would thrill David Cronenberg or Dr X. There’s also an incredible gelatin computer-brain, that Nathan appears to have whipped up all on his own (or, he’s found a really efficient way to enforce his Non-Disclosure Agreements). Nathan comes off as a super genius at work in a fantastic Fortress of Solitude.

As soon as Caleb engages Nathan with chitchat about Stochastic versus Deterministic systems, we’re properly intimidated and accept Garland’s show on a level higher than that of most science fiction pictures. We stop worrying about the details of the super-science. We have no idea how Nathan’s super-house was constructed two hours from nowhere, or how it is maintained. Who cleans all the hand smudges off those flawless glass barriers?  Nathan jokes about killing the men that constructed his house, like the laborers who built the Egyptian pyramids. We have to take things at face value as much as Caleb does, which allows Garland to usher us into deeper levels of sci-fi complexity.

Nathan’s careful control over what his guest knows and doesn’t know makes us uncomfortable. When Caleb tries to demonstrate that he can understand what’s going on, Nathan responds with a condescending smile and the kind of pep talk- encouragement that Those In The Know reserve for mere mortals on the payroll. If he has no patience for Caleb’s ideas, why exactly does Nathan want him there? 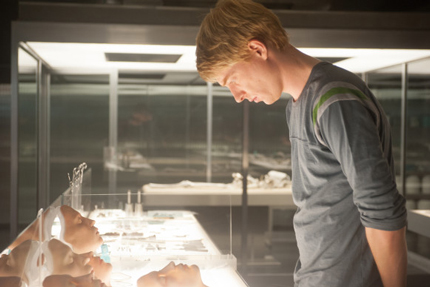 At about the fifteen-minute mark we begin to realize that Nathan is definitely on some kind of power trip, even if it’s of the laid-back kind. He seems too much in need of adoration. Nathan drinks to excess, and when drunk reveals a veiled contempt for his guest. His ‘friendly’ interaction reveals a profound need to keep others under his complete control. Caleb can’t win in this game. Nathan chides him for being passive, yet verbally raps Caleb’s knuckles when he teases the boundaries of Nathan’s strict rules.

A key connection comes when Nathan shows great interest in being compared to a God. The story is Frankenstein of course, but the opening reels closely mirror the old sci-fi horror classic Island of Lost Souls. By virtue of his scientific achievements, Charles Laughton’s Dr. Moreau deems himself to be beating God at his own game. He plays host to a castaway under false pretenses, and introduces him to a special woman who is ‘almost human,’ for the purpose of a secret test.  Both Moreau and Nathan talk enough about feelings and sex to make us suspect that they want to see if their chosen visitors will mate with their respective creations.  Each ‘creator’ trips up when he loses control of his egotistical little kingdom.

So why exactly did Nathan invite Caleb in the first place?  Is Nathan just showing off, as when he performs a choreographed dance with one of his creations? As the submissive employee, Caleb surrenders several levels of control to his boss, who in his hubris thinks himself capable of managing the affairs of other people as well as his new creation. The real progress of the story is Caleb finding out just how much Nathan has been pre-directing his actions, and even his thoughts. We resent Nathan just as much as Caleb does.

Alex Garland’s script then goes off in completely new directions. Caleb is looking for proof of Artificial Intelligence in Ava, when she’s already showing the all-too human ability to deceive others to get what she wants and needs. And in terms of basic survival — not giving herself away with ‘human’ weakness — Ava is proving the superiority of machine over live flesh. The most pleasing surprise comes when our allegiances to the characters take a major shift. Ava is the prisoner and Caleb the interloping stranger who can help set her free. But is upsetting Nathan’s plan a good idea?   Who is in control here? 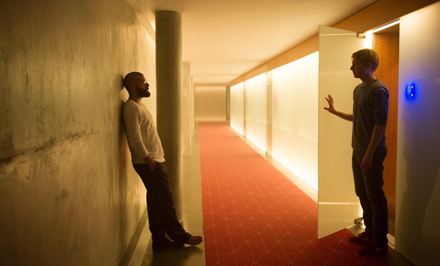 Ex Machina could be a one-act play, if it weren’t for the fact that one of the leading parts requires an actress to become a ‘Visible Woman” more delicate and incomplete than the robot Maria in Lang’s Metropolis. Actors Vikander, Isaac and Gleeson were surely energized by their rich, challenging roles. They’re joined by Sonoya Mizuno, who plays Nathan’s Japanese housemaid, Kyoko.  She’s not meant to intersect with Ava, and the scene were they come across each other is strange indeed.

That’s as far as I should go. This show does more than play with genre conventions or explore a new wrinkle in robotics. Built on the foundation of the visionary sci-fi films Creation of the Humanoids and Blade Runner, Ex Machina will most likely come to be regarded as a Sci-fi classic.

Alex Garland has two new projects going with another writer, Jeff VanderMeer. I intend to keep an eye out for them.

Lionsgate’s Blu-ray + Digital HD of Ex Machina is the expected flawless encoding of a movie that was recommended to me by practically everyone I know. The careful transfer shows off an impressive production. That futuristic house is so real that we can’t decide if it’s a set or an existing structure. The digital effects are seamless. Before CGI I could never get enough behind the scenes footage, from almost any movie. With digital pictures I no longer want to see BTS material — the illusions in Ex Machina are too good to spoil. The soundtrack score sounds experimental; at one point it appears to be rearranging the ‘talk to the aliens’ theme from Close Encounters of the Third Kind.

Fans of the film will want to take a look at the extras. Lionsgate offers a pretty good set of EPK style featurettes, in which the participants really seem excited about the show. A Q&A session with the writer-director, the producers and the composers sees them volunteering their thoughts — Alex Garland comes off as intelligent and likable.

At this point in time, Alex Garland’s original screenplay has been nominated for an Oscar, as have the special effects by Andrew Whitehurst, Paul Norris, Mark Williams Ardington and Sara Bennett. I’m thinking the Academy is more likely to vote for the Mad Max epic, but you never know — this is pretty elegant work.