Director Agnieszka Holland pulls off a difficult task — her true-life Holocaust tale neither trivializes the horror nor glamorizes individualized victims at the expense of the big picture. Marco Hofschneider is the inexperienced German teenager who by strange quirks of fate becomes a staunch Stalinist in a Communist school, then a Nazi war hero and candidate for Hitler Youth honors and adoption by a Nazi officer… if he can avoid being uncovered as a Jew in hiding. It sounds tasteless but it’s not — the true story of Solomon Perel reveals the ‘fluidity’ of ideology when survival is on the line. Our young hero must keep ‘becoming’ what he pretends to be. With André Wilms, René Hofschneider and Julie Delpy as a rabid Hitlerite. 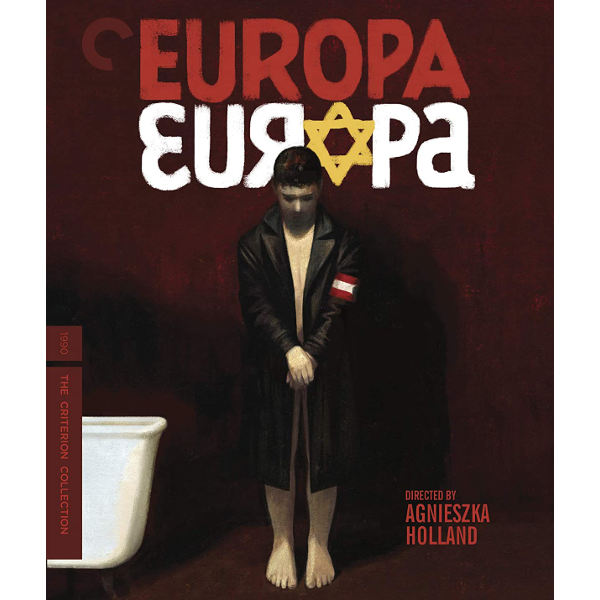 When feature motion pictures began to be made about the Holocaust, it became evident very quickly that the subject was a difficult fit for the entertainment medium. Horror shows couldn’t contain the cosmic level of tragic evil unleashed. To most of us sheltered Americans, it was just too much to take.

The problems stack up right away. Doing anything to stylize the concentration camp experience brings forth accusations of glamorization. Keeping the horrors at a reserve will get one labeled as uncaring, and focusing on a just a few victims is cause for editorials about exploiting ‘star’ characters at the expense of millions. The makers of the nine-hour Shoah worked totally from the memory of witnesses in the belief that any representation/recreation is exploitation. And although the pop 1970s miniseries Holocaust raised awareness of the catastrophe for a new generation, it’s gone down in the books as a soap opera that mainly boosted the career of Meryl Streep.

Stanley Kramer’s well-intentioned Judgment at Nuremburg asked why German society so eagerly adopted Nazi ideology, as if political passivity/acquiescence is a rare thing. The message could have been ‘it can happen here,’ but Kramer settled for blaming unrepentant Germans refusing to accept responsibility for their actions. The more recent and honored Schindler’s List had to dig pretty deep to find a true story that isn’t 100% degradation and misery. If my family had been saved by an exceptionally merciful Nazi exploiter, I’d be grateful as well.

Polish director Agnieszka Holland had to go to Czechoslovakia to attend film school; her mentor was Andrzej Wajda. In Europa Europa she found a true-life story that enables an unusual overview of conflicting WW2 ideologies. It’s an exceptional story, one in fact so miraculous that it’s hard to believe it could have happened. The family of Solomon Perel, a German-Polish Jew, fled Germany to Poland to be safe from persecution. When the Germans invaded, Perel and his brother struck out for the East. They became separated, and Solomon was placed in a Communist Komsomol school for orphans. There he learned perfect Russian and adopted the proper Stalinist mindset to gain approval. When the German advance came, Solomon avoided being shot as a Jew by posing as a German orphan liberated from the Reds. He interpreted for a German unit, was inadvertently called a hero and earned a surprising reward. His commanding officer adopted him and sent him back to Germany to an elite Hitler Youth Academy. Amazingly adept at fitting in, Solomon could never rest easy — as he was circumcised as a baby, detecting his impersonation could be all too easy. 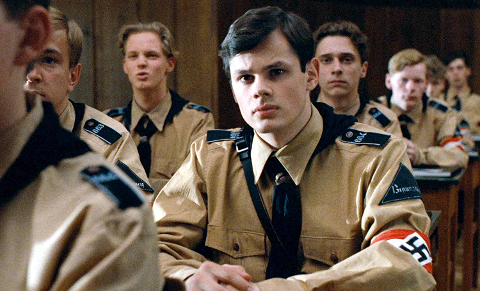 It would also be all too easy to turn this into an exploitation movie. The respected Ms. Holland worked with autobiographer Perel for weeks, and came up with a screenplay that reaches every benchmark for quality. The film’s flawless period look was provided by Allan Starski, who also designed Schindler’s List and The Pianist. Although the visual context is as grim as can be expected, Holland tells the story as if dazzled by the unlikelihood of it all — unexpected developments save Solomon time and again. As pointed out by essayist Amy Taubin, water imagery abounds, as if our young hero, nicknamed ‘Sally’ (Marco Hofschneider) has a special talent for just ‘going with the flow.’ His house is invaded and his sister murdered when he’s in the bath; he escapes by hiding in a rain barrel. Almost drowning is the result of an absurd situation — refugees fleeing the Germans are met in mid-river by similar refugees coming the other way, fleeing the Russians.

At age fourteen the handsome and likable Sally is befriended by almost everyone except a fellow Komsomol student, a Christian Pole who refuses to kowtow to the oppressive Red brainwashing. The fervent lady teacher proves to the children that Stalin is more worthy of prayer than Jesus — an assistant makes candy fall from the sky, from the glorious leader. Sally has several bizarre dreams — in one of them Hitler and Stalin dance amid falling candy and little girls in ballet tutus.

Composing pro-Stalin speeches makes Sally an honors student, and when he’s captured by the advancing Wehrmacht he finds that his Russian is so good, the Germans accept his lies about being an ethnic German. He translates for his fighting unit and is congratulated for helping to capture Stalin’s son. In a totally believable development, the pretty-boy Sally is befriended by a soldier (André Wilms) who has an equally taboo secret to hide — he’s gay. For a short while Sally has someone he can relate to. The soldier had been an actor. They end up talking about role-playing, an appropriate topic for men that must obliterate their basic character to survive.

Sally’s impersonation would seem impossible when he’s sent back to Germany and placed in a boarding school — he doesn’t think he has a chance until he sees that the toilet stalls have latches, and the boys routinely shower in boxer shorts for modesty. Sally’s skill at fitting in is nothing short of amazing. Inducted into the blood rituals of the Hitler Youth, he discovers that every ‘character building’ lesson seems to be about exterminating Jews. It’s like being a chicken in a wolf academy, with no way of hiding one’s feathers.

Although I didn’t hear it discussed too much in Criterion’s extras, Solomon Perel’s amazing luck at every step of the way is aided by the fact that so many women find him attractive. A woman in Poland is deeply in love with him. The Komsomol teacher appears to be sexually excited by Sally’s pro-Stalin oratory. The female agent who drives him back to school in Germany all but assaults him in the train compartment. He is a cute kid, and everybody likes him. If this were a (very sick) comedy, it might be titled ‘how to survive against impossible odds without even trying.’

The cutest kitchen helper in the Hitler Youth Academy is Leni (Julie Delpy of Before Sunrise), who also takes a fancy to Sally. The fun turns scary when the teen fanatic Leni wants Sally’s help to bear a baby to give to Hitler. Leni’s mother, a war widow (Halina Labonarska) is so warm and understanding, that Sally might make a terrible mistake by trusting her.

Sally’s experiences are as weird as Alice’s down the rabbit hole. He can’t assimilate the horrors he sees, such as the fact that his new German Army pals have hanged a small girl and left her for all to see. There is no alternative to finding a way to ‘get by,’ to fit in. Jews are killed and anybody that opposes the absurd horror in any way ends up dead. Whatever absurd crazy thing comes along, Sally takes it in stride. Saluting a statue of Hitler, the Jewish boy takes the holy blood oath to dedicate his life and soul to the Nazi cause. He competes in a swimming race in full uniform, carrying a gun, in a pool decorated with a giant swastika.

As one of the commentators (or Ms. Holland?) says, Solomon’s circumcised penis saved his soul — if he didn’t have to worry about being found out at any time, he would likely have become a Nazi through and through. Sally uses his vacation to go to the city where he last heard his parents were living, in a ghetto. He repeatedly rides a streetcar that must pass through the zone, hoping to catch a glimpse of his parents. Although the windows have been soaped, he peeks through to see the corpses in the street and other horrors. The idea that Sally ‘goes along’ with the evils around him, is a lesson that applies to us as well, we who live in cities where people must live on the sidewalks.

Like Spielberg’s Holocaust epic, Europa Europa concludes by leaping forward to meet the ‘real’ Solomon Perel, a full 44 years later. Agnieszka’s film doesn’t whitewash Sally’s experience, or come to the conclusion that ideology doesn’t matter. A couple of narrative points are so pat that they do feel at least a little confected. Sally neatly avoids being exposed by the all-too efficient German records system, and a reunion with a lost relative is more than a little convenient, story-wise. Yet these events do not seem false. Is it wrong to tell of a crazy survivor, the One That Got Away?  We approve of movies made from horrible true events, such as Die Weiße Rose, Die Wannseekonferenz and Docteur Petiot. But they’re so appallingly morbid that it’s difficult to call them entertainment. This crazy adventure works because it’s so hard to believe that this kid could get away with it. His story does not trivialize the fate of the millions that didn’t.

The Criterion Collection’s Blu-ray of Europa Europa is a handsome encoding of this beautifully shot film. Each episode makes an indelible impression. At each turn the odyssey through warped history touches on unforgettable people and terrible contradictions.

Disc producer Kate Elmore’s extras get right to the heart of the matter. A director’s commentary has been taken from an earlier Arrow release. Ms. Holland and actor Marco Hofschneider offer thorough, engaging talks about the making of the picture; Marco was chosen after his professional actor-brother René aged-out of contention for the part of Sally. Perel’s interview allows us to gauge his character for ourselves — could he be a tall tale spinner?   Solomon doesn’t pretend that what he did was in any way heroic — he was a Communist, then a fervent Nazi, and finally chucked it all to concentrate only on family. Only 35 years later did he decide that his experience was too important to let disappear. We learn that after the war, Solomon contacted his fellow Hitler Youth cadets, as well as the real Leni… meetings that are hard to imagine.

Annette Insdorff’s visual assessment takes on the film’s vibrant symbolism and dream sequences. We like hearing everything Agnieszka Holland has to say, as she’s accomplished so much through a difficult career course. Her ‘holocaust’ movie is world-class cinema.