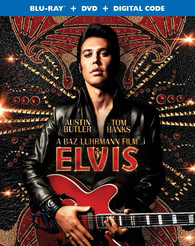 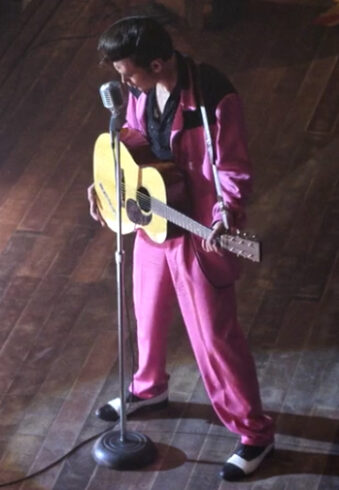 In 1960’s Psycho, Alfred Hitchcock dramatized a murder using 78 camera setups and 52 cuts. 62 years later the Australian director Baz Luhrmann employed the same techniques to tell the story of Elvis. Hitchcock’s harrowing shower scene lasts all of 45 seconds yet it still resonates—Luhrmann’s movie runs 159 minutes and for some in the audience, it may begin to fade before they hit the exit.

For better and for worse, Elvis moves like a bullet train. Thanks to the convulsive editing of Matt Villa and Jonathan Redmond, the movie’s imagery—an onslaught of high energy jolts delivered in bite sized pieces—can dazzle the senses. And at nearly three hours it can dull them too. Still, the breakneck speed is appropriate for an artist who packed a multitude of lifetimes into 42 years. As conceived by Luhrmann (who co-wrote the script) and played by Austin Butler, the Mississippi-born Presley is a wide-eyed troubadour torn between tent-show revivals and dirty dancing, a Southern-fried Candide. Such adventurers are bound to meet a devil or angel along the way and on an evening in 1954, Presley encountered both in the form of music impresario Colonel Tom Parker. 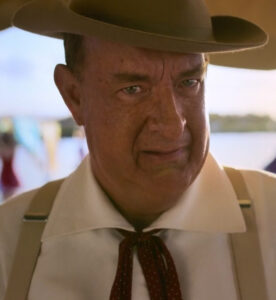 The venue was the Louisiana Hayride, a Shreveport music hall showcasing an incendiary new talent known around town as the “Hillbilly Cat.” Once the Colonel lays eyes on that baby-faced hipster, Presley’s fate is cast. Tom Hanks plays the Dutch-born Parker as a Machiavellian Foghorn Leghorn, equipped with a cowboy hat, an unknowable accent, and a body suit that seems to have been inflated with Flubber gas—it’s a wonder he doesn’t bounce from scene to scene.

Using Parker’s carnival experience as the film’s central metaphor, Luhrmann turns sideshow pitchman himself, exchanging any hint of moderation for intemperate sensationalism; Elvis has the vertiginous razzle-dazzle of a crowded midway at Disneyland and is just as frivolous. But Luhrmann is thinking with his eyes—the writer/director delivers little insight into Presley’s character and what there is suggests the kind of hackwork Orson Welles once dismissed as “a dollar book Freudian gag.” Yet the movie is compulsively watchable—the near-surreal set designs have an uncanny sheen; they’re as obsessively manicured as the actors, even dank Memphis backstreets have a shimmer—all due credit to Melbourne-born Mandy Walker whose cinematography burnishes every nook and cranny of Catherine Martin and Karen Murphy’s perfectly overripe production design. 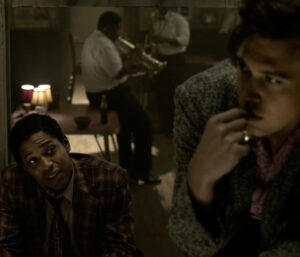 As hypnotic as this circus is, Luhrmann’s imagination falters when it comes to narrative and the dialog is from hunger (it’s particularly unhelpful to Butler who gives an otherwise heartfelt performance). This is the kind of movie where an entertainer makes their entrance and someone says “Oh, look, it’s Mahalia Jackson”, just to clue us in. And there are plenty of legendary artists to “oh, look” at: Little Richard, Hank Snow, Big Mama Thornton, and B.B. King who, for the sake of Luhrmann’s storyline, acts as Elvis’ musical conscience, a guitar slinging Jiminy Cricket. The two men meet and greet on Beale street just as Elvis is beginning his reign—their student/teacher relationship is but one of many tall tales in Baz’s Brobdingnagian saga. 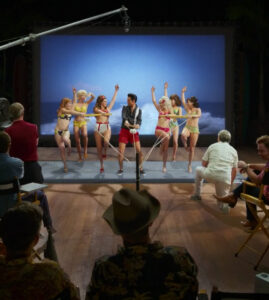 Luhrmann’s merry-go-round reaches its dizzying apex just when Presley is on his way down; the singer’s fall and inevitable resurgence provide the most exhilarating moments in the film. Luhrmann creates a veritable sizzle reel for The Sixties, embracing the candified Technicolor and pop-art glitz of films that wore their shallowness like a badge of honor; overproduced and underdressed sex farces like What a Way to Go and A Guide for the Married Man. The archetypal Elvis movie was just as colorful and even more inconsequential than those films, but assembly line products like Girls! Girls! Girls and Blue Hawaii were slogs—even with nifty musical interludes like Return to Sender and Can’t Help Falling in Love. Churning out such tripe for producer Hal Wallis would take its toll on the singer’s reputation (he cranked out 31 films in 12 years) but Luhrmann makes Presley’s Hollywood tenure look as vibrant and kinetic as Godard’s A Woman is A Woman. 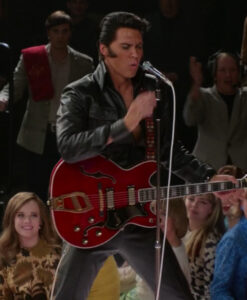 The King’s Movieland misadventures segue seamlessly into the “comeback” show broadcast on December 3, 1968 (to be clear, every frame of this movie is a segue). One of the most anticipated television events of the era, the show was titled simply Elvis, and NBC, not hedging their bets,  followed it with Special Bardot, a song-heavy fashion show/travelogue starring the still alluring French actress. In the late sixties, both entertainers were on the wane, and culture vultures licked their lips at the prospect of a kitsch-fest. But Bardot was demure, charming, and still a world class sex kitten. And Elvis silenced any doubters with his opening line; “If you’re looking for trouble, you came to the right place.” Clad in the black leather uniform of a dedicated rock n’ roll fetishist, a cherry-red guitar around his neck, and that insouciant forelock secured in place, the hillbilly cat howled once more. 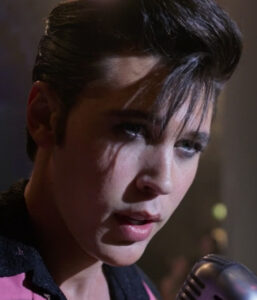 The Blu ray release from Warner Bros. Home Entertainment is, as expected, a dazzler. The packages contains both 2K and 4K discs and as stunning as the 2K looks, the 4K is, on the right monitor, clearly superior. The extras are sparse—three short promotional extras about the making of the film and Elvis’s career—but this is surely the calm before the more extravagant storm of extras accompanying the inevitable super deluxe release (Christmas comes but once a year but Elvis is forever).