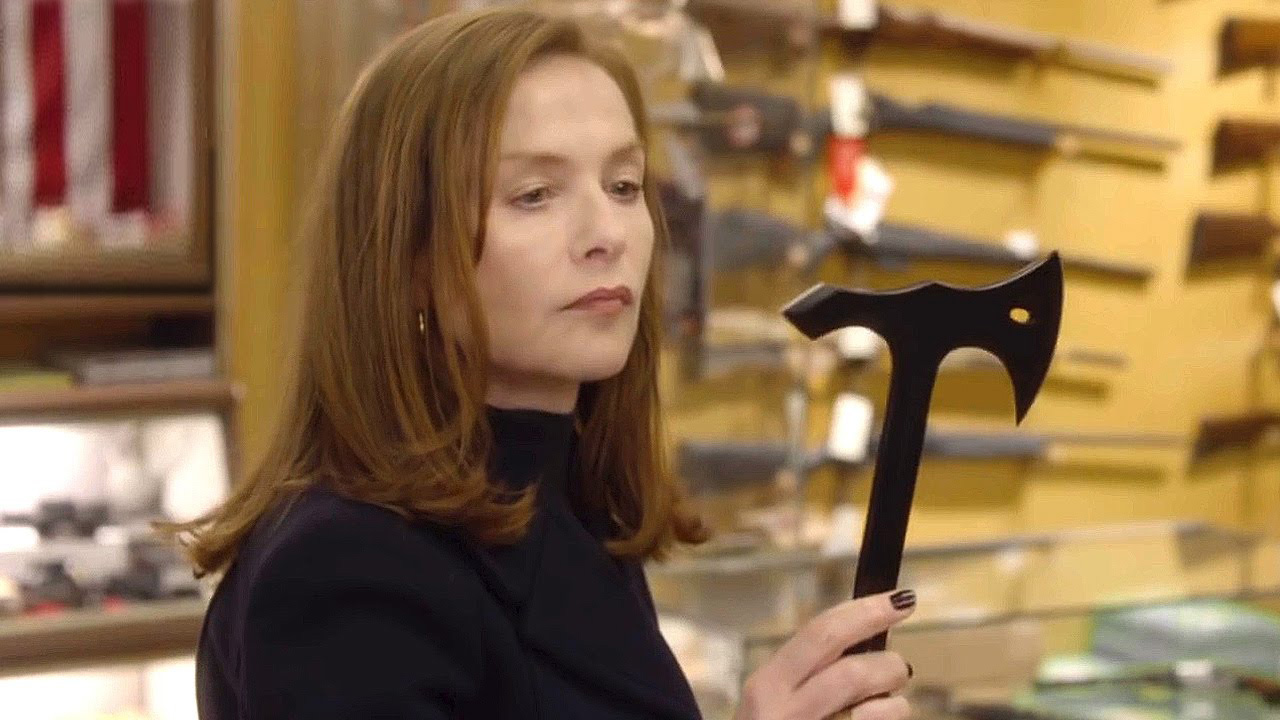 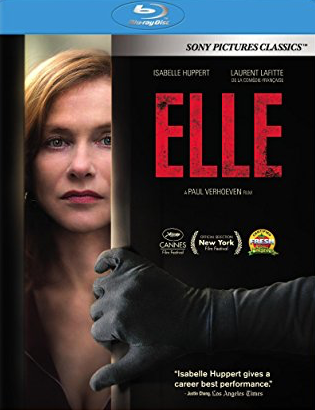 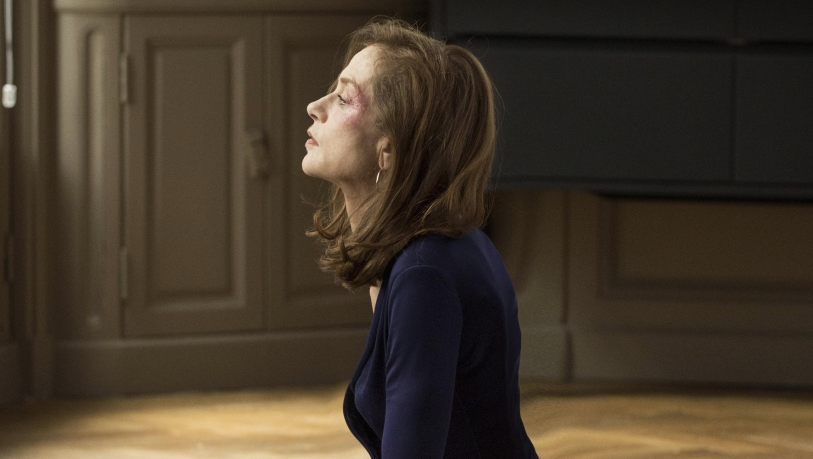 Elle, the new film from the Dutch provocateur Paul Verhoeven, begins with that already infamous assault, our heroine struggling under the weight of her attacker while an unblinking cat perches nearby, watching. That dispassionate cat could easily be mistaken for Verhoeven himself, working again with the same cooly clinical approach he brought to The Fourth Man and Turkish Delight. This fiendishly funny black comedy of errors might be his best film.

As the steely Michèle, Isabelle Huppert follows the lead of both Verhoeven and that cat, keeping her emotions and mysterious desires hidden behind a beautiful, implacable facade that lights up only occasionally, usually at the misfortunes of her family and friends. Michèle, as we’ll find, is a tough nut to crack. 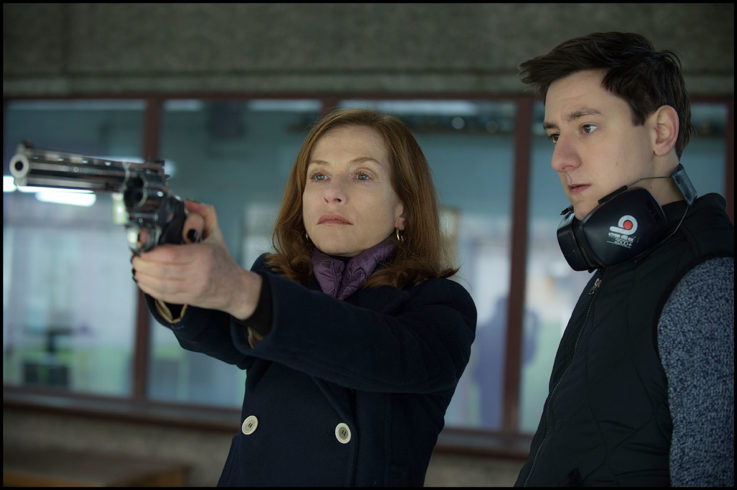 She gathers herself against any future attacks from her unknown assailant with the grim determination of a soldier at the Alamo, shopping for pepper spray and iron axes as if deciding on the ripest cantaloupe in the fruit section. And the attacks do come. Again and again. Sometimes in a violent revenge fantasy and sometimes in a delirious sexual reverie.

And when Michèle finally unmasks her attacker, there is the undeniable sense that she has unmasked something about herself as well. 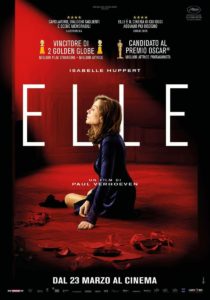 Verhoeven’s direction, close to the vest and sublimely unspectacular, will be an eye-opener to those only familiar with his comically lurid sexploitation films such as Basic Instinct and Showgirls. Each outlandishly funny moment is staged in the most dour, button down fashion possible including a dysfunctional family Christmas party that’s like an episode of Mama’s Family directed by Luis Buñuel.

No victim, no martyr, but a woman who favors her libido over her heart and with a moral compass that is all over the map, Michèle is one of the most complex characters in recent movie history. She stands well apart from her silver screen contemporaries, the well-financed superheroes of the multiplex and the well-meaning sufferers of Sundance offerings. A heartfelt and completely unironic “thank you” to Huppert and Verhoeven for remembering the adults in the audience.

Sony Pictures Home Entertainment presents a very fine blu ray release of Elle with an excellent representation of Stéphane Fontaine’s golden-hued cinematography and composer Anne Dudley’s (The Crying Game) sinister and melancholy score. Extras include a short making of piece, A Tale of Empowerment – Making Elle, the AFI tribute to Huppert, Celebrating an Icon and the original theatrical trailer. 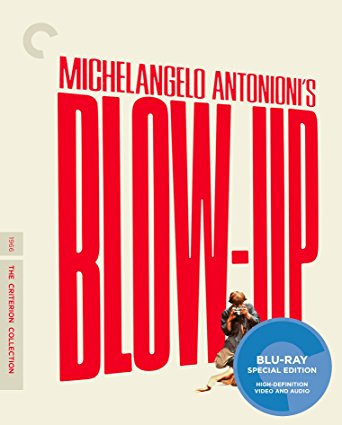 In 1960 Michaelangelo Antonioni made L’avventura starring Monica Vitti and Gabriele Ferzetti, a Mediterranean mystery about a missing woman and the band of the beautiful and bored socialites who go looking for her. It ends with the woman’s disappearance unexplained and Vitti and Ferzetti left holding the bag, existentially speaking. The movie was booed at Cannes on its first appearance but wound up winning the festival’s Jury Prize. 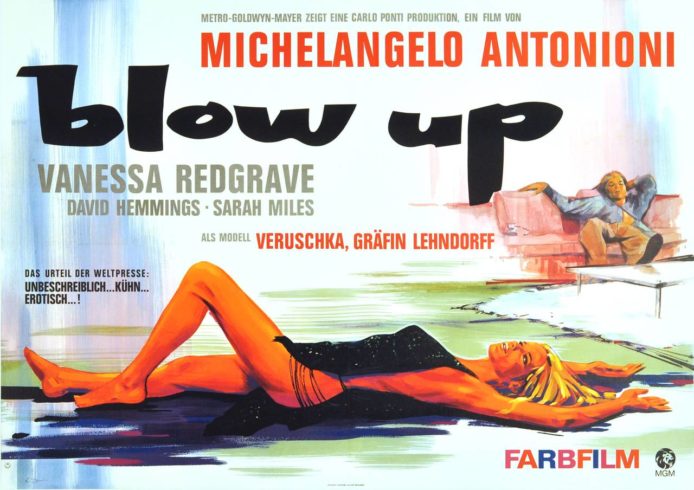 The film remains a game-changing 145 minute mood piece about Alienation with a capital “A”, an abstract concept brought vividly to life by the then 48 year old director and his preternaturally beautiful cast. Six years later with Blow Up, the now-internationally acclaimed director transported those themes and a whiff of that same mystery to swinging London, replacing the Aeolian Islands with King’s Road and Carnaby Street.

David Hemmings plays Thomas, a moody photographer on the make who spends his days cruising an England whose grey landscape has been temporarily set ablaze by The Beatles and Peter Max. Commandeering a Rolls Royce convertible with a nifty Herbie Hancock score as his personal soundtrack, he obsessively criss-crosses the skinny streets of London-town but doesn’t appear to be in search of anything.

A beautiful shambles (he looks like Paul McCartney’s debauched twin), the young dilettante is used to excitement coming to him and the revolving door of sultry supermodels (including the ultra-lanky Verushka) always ensures his frequent boredom is short-lived.

On one of his aimless sojourns he finds himself in an oddly foreboding park in Greenwich where he spots a young woman, tall, angular and emanating a blatantly phony sense of joie de vivre as she frolics with her boyfriend. A compulsive snapper, Thomas shoots a few frames of the lovers’ embrace as they gambol, inspiring a head scratching confrontation with the enraged miss (played by Vanessa Redgrave) who demands the film.

Later she shows up at his door step and they engage in a sexually tinged cat and mouse game that leads to nothing but more questions. His curiosity sparked – just what is in those pictures – he turns amateur sleuth. Thomas, as they say in True Detective, finds more than he bargained for. 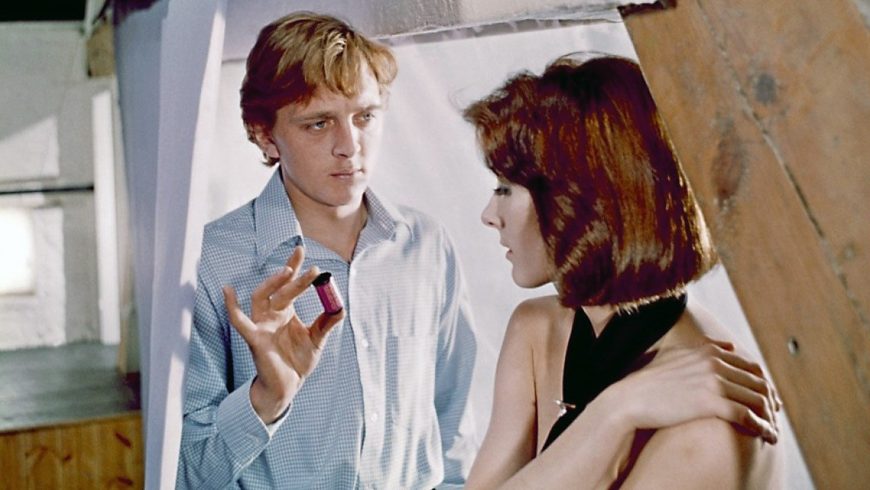 Antonioni is retracing familiar ground in Blow Up and there is the nagging sense of an artist on a bit of a treadmill. Those qualms aside, the director’s pacing is immaculate and his unerring sense of composition, in particular the scenes in the park itself, with its trees gently swaying over us, both soothing and unnerving, is wonderfully unsettling, the precursor to Twin Peaks‘ spooky Sycamores.

While Redgrave’s mystery woman plays reluctant model for Hemmings’ nosy photog, Hemmings could be the stand-in for Antonioni himself, each playing detective with their cameras. The cinematographer in charge of Antonioni’s camera, Carlo Di Palma, serves up a beautiful picture for his boss and our heroes at Criterion have done their level best to bring it to blu ray, and then some.

Along with that stellar transfer Criterion offers an almost total immersion into the world of the film and the era in which it was created. Among the extras are:

A dual documentary about the making of the film “Blow Up of “Blow Up,” in which
photography experts Walter Moser and Philippe Garner and art historian David Alan Mellor hold forth on Antonioni.

An excerpt from 2001’s Michelangelo Antonioni: The Eye That Changed Cinema.

A pleasingly long interview with Vanessa Redgrave (around 45 minutes) and archival interviews with Antonioni, Hemmings and Jane Birkin.

The teaser trailer and the original theatrical trailer are included and finally, last and far from least, a beautifully printed booklet with rare photos featuring an essay by film scholar David Forgacs, a mid-Sixties account of the film’s production by Stig Björkman and “Las Babas del Diablo”, the original short story by Argentine novelist Julio Cortázar. 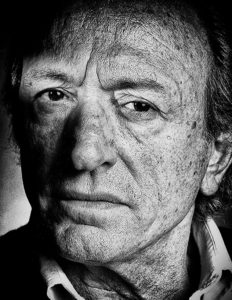 A quick word about Carlo Di Palma. The great man behind the camera for Pietro Germi’s Divorce Italian Style and Antonioni’s Red Desert had just come off a 1965 thriller, Masimo Pupillo’s 5 Tombe per un Medium, when Antonioni enlisted him for Blow Up. Better known to American audiences as Terror-Creatures from Beyond the Grave, Pupillo’s underrated shocker was one of Barbara Steele’s better films. You can read Glenn Erickson’s review of the excellent blu ray release here.

As for Di Palma, his star only rose, working with Bertolucci on 1981’s Tragedy of a Ridiculous Man and several of Woody Allen’s mid-period classics including Hannah and Her Sisters, Radio Days and Husbands and Wives.