We’ve all met Tracy Flick — the eager-beaver student that charms the right teachers, wins all the awards and corners the big scholarships. Alexander Payne’s witty, perceptive look at High School shows the predicament of a model teacher who can’t help but sabotage a pupil’s run for class president. Reese Witherspoon’s wholly original characterization scores big, and Matthew Broderick plays what is probably his best screen role. “What’s the difference between morals and ethics, anyway?”

Writer-director Alexander Payne (About Schmidt; Sideways) turns out an exceptional comedy about once every three years. A Payne film can be typed by its full empathy for every character on screen, even the ostensible villains. His 1996 Citizen Ruth is an unlikely winner about a glue-sniffing delinquent co-opted by both sides of the reproduction rights struggle. Payne’s acute sensitivity to the weaknesses of ordinary people also fuels Election, a hilarious satire about Man as a political and sexual animal. The arena is an ordinary high school and the hero is a principled teacher that would normally never do anything immoral or unethical. He even teaches the distinction between morals and ethics in his history class, and he’s completely sincere. But life refuses to stay that simple. Emotions can certainly get the better of people, but usually not with consequences this disastrous. Jim McAllister (Matthew Broderick) watches in horror as his best buddy, fellow teacher Dave Novotny (Mark Harelik) tosses his life away by sleeping with a young student. Jim’s confusion is compounded by other factors. His wife Diane (Molly Hagan) has him on a strict make-a-baby schedule, and he intuits that Dave’s ex Linda (Delaney Driscoll) — Diane’s best friend — is flirting with him. Then Jim finds out that the underage girl that Dave ‘crossed the line’ with is a student he can barely tolerate. The annoyingly aggressive super-achiever Tracy Flick (Reese Witherspoon) has been primed to believe that other people are just obstacles on her road to success. She demands attention in Jim’s class, frantically waving her hand to answer every question.

The Jim McAllister / Tracy Flick conflict is one we’ve never seen in high school movies like To Sir, With Love. Teachers must deal with a spectrum of student attitudes, but Tracy is off the chart when it comes to rubbing Jim the wrong way. Convinced that her personal destiny elevates her above everyone else, Tracy demands special treatment in all situations. She even petitions God when she prays, lecturing him to accept that she’s special as well. Only Jim and the principal know of Tracy’s affair with Dave, and although Tracy wasn’t responsible, Jim can help but resent her. He takes this out in petty ways, like not calling on her in class. When Tracy runs unopposed for the office of student president, Dave feels compelled to cross the line in a different way. He actively encourages another student, the good-natured Paul Metzler (Chris Klein) to run against her. Tracy figures out the connection immediately, and the war is on. Tracy Flick has that eager intensity that wins debates and attracts scholarships; her energy soon convinces those that might oppose her to simply give up. Election’s central image is Reese Witherspoon’s eager face, up at the crack of dawn, scrubbed and ready to collect petition signatures for her candidacy. She offers free bubble gum in a goldfish bowl; later on she’ll give out cupcakes — 400 free cupcakes that her booster mom (Colleen Camp) stayed up all night baking. Later on, Jim is convinced that Tracy is the miscreant that ripped up all of Paul’s campaign posters, but he can’t prove anything. It galls him: Little Miss Perfect gets all the breaks. She hasn’t been touched by the scandal that ruined Dave’s life. Jim becomes determined to see that Tracy doesn’t win … against his own better interest.

Jim McAllister’s Omaha high school turns out to be a hormonal hotbed. Candidate Paul Metzler’s little sister Tammy (Jessica Campbell), a budding lesbian, becomes furious when her would-be girlfriend starts dating Paul instead. Tammy launches her own candidacy for president, running on the anarchic slogan “Who Cares?” The principal, naturally, wants to expel her on the spot.

Alas, Jim isn’t immune to similar pressures. He resents his meager paycheck and gets onto a slippery slope with the now unattached Linda Novotny, jeopardizing his marriage. After all that grief, when Jim drags himself into school he’s confronted with the smug face of his teenage nemesis. For Jim, he’s in a life or death battle with an even more malignant update of The Bad Seed. One way or another, Tracy Flick must be destroyed.

Election benefits from razor-sharp observations of human behavior, much of which is influenced by sex. No matter how sweet Paul Metzler is, his younger sister Tammy hates him because she’s fundamentally unhappy without a girlfriend. Jim McAllister is a multiple Teacher of the Year award winner, but his commitment to ethics can’t shield him from the proverbial slings and arrows of outrageous fortune. He has sex fantasies like anyone else, and the right combination of events is too much for him. A bee stings Jim’s eyelid on the day of the student election, giving him the aspect of The Walking Wounded. His whole life is imploding, for no reason at all. He knows that he’s still the same nice guy, but nobody will understand. He’s God’s Lonely Man. Election compares him to a museum exhibit sculpture of a frightened, naked cave man. We may have morals and ethics, but in our emotions we’re still confused troglodytes. Tracy Flick is a true original, the student that gives overachievers a bad name. Payne finds a perfect audio sting to express the all-consuming rage that Tracy levels at anything that comes between her and her goals. Whenever she goes into feral overdrive, a wailing scream bursts onto the soundtrack … her cave-dwelling instincts are as acute as anyone’s. The ‘primitive’ scream-chant is an inspired repurposing of Ennio Morricone’s main theme from the spaghetti western Navajo Joe (1966). When Tracy vandalizes Paul Metzler’s campaign posters, the cue continues into Morricone’s full guitar piece … the same riff lifted by Quentin Tarantino for Kill Bill Part 2.

Alexander Payne and Jim Taylor’s dialogue is near flawless; the kids talk as they should and there’s not a stereotype in sight. Matthew Broderick is sensational as the sensitive nice guy who gets in too deep, while Reese Witherspoon hits a career high with a character so precise, we’re surprised she wasn’t fatally typecast. The best thing about Election is that we exit hating no character and understanding all of them — even if we play-fair plodders secretly wish to sabotage the selfish achievers that elbow us out of their way.

The Criterion Collection’s Blu-ray of Election does this marvelous picture justice, with a gleaming transfer that brings us Tracy Flick’s eager face in all of its peaches ‘n’ cream splendor. The color and clarity are remarkable, and another testament to the talent of cinematographer James Glennon (El Norte). The 5.1 sound is uncompressed.

The Alexander Payne commentary from the old 2008 Paramount disc is here, with the filmmaker explaining how he filmed the show in a working Nebraska high school, sometimes during class time. He proudly points out moments of inspiration in Witherspoon’s performance, some of which emerged on the spot, like Tracy’s ‘pogo stick’ reaction to the news that she’s won the election. 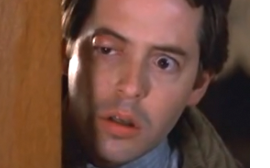 Criterion producer Jason Altman includes new interviews with Payne and Witherspoon, a new making-of documentary, plus some good archival items. An Omaha TV news item sees director Payne explaining why he keeps bringing productions back to his home state. A very pleasant surprise is Payne’s 1990 UCLA Thesis Film, The Passion of Martin. In a new intro Payne explains that this one film won him interviews, an agent and a studio job — although none of his proposed projects were green-lit. One of them was About Schmidt, which he returned to years later.

Dana Evans’ essay makes a compelling comparison between the election in the movie and our own Barnum & Bailey national elections of the past twenty years or so, with recounts, nihilistic candidates and an overqualified female go-getter. The foldout flyer is illustrated with mock-up high school yearbook photos from the film — in his commentary Payne explains that the short CGI yearbook sequence was one of the more expensive things in the movie.