The Black Vampire!  The most impressive Spanish-language noir restoration yet, Román Viñoly Barreto’s superior serial murder thriller hails from 1953 Argentina. It re-interprets Fritz Lang’s “M” from a different, more emotionally engaging perspective: star Olga Zubarry’s nightclub singer hesitates to tell what she knows about a child-killer, because she might lose custody of her own young daughter. The expressionist noir owes little to Hollywood. Some find it more satisfying than Lang’s classic version. The Film Noir Foundation’s extras are excellent. The big cinema event of 2008 and 2009 was the unexpected find of an almost-complete copy of the lost roadshow version of Fritz Lang’s Metropolis. That revelation led to more good news for world cinema, when international attention was focused on the archives and film collectors of Argentina. The Film Noir Foundation connected with Buenos Aires critic and historian Fernando Martín Peña, and through him extended their noir researches and restoration efforts to several Spanish language titles virtually unknown in America.

The Foundation’s Eddie Muller and Alan K. Rode have shepherded several Flicker Alley Blu-rays of Hollywood noirs, often titles that needed special effort to come in out of the cold of rights limbo. The Argentinian films must have been an even much harder row to hoe, so to speak — much of that country’s legendary film heritage has been neglected. The samples we’ve seen of classic Argentinian film have mostly been limited to tattered clips of Carlos Gardel and Eva Perón movies. 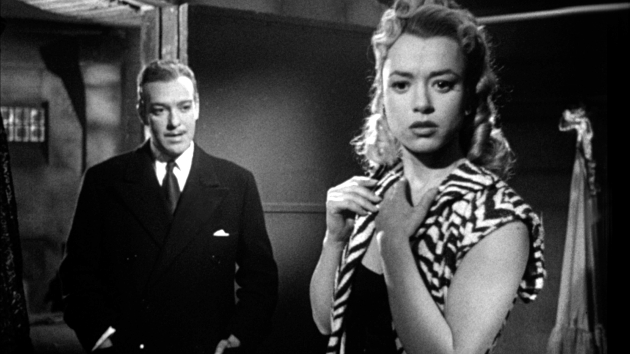 El vampiro negro (The Black Vampire) is a serial killer drama about a sensitive subject. It verges on psychological horror, with occasional overt horror vibes. It’s a second remake of the 1931 “M”, Fritz Lang’s masterpiece starring Peter Lorre as a serial killer of children, based on the real-life Vampire of Düsseldorf. Joseph Losey’s 1951 remake — undertaken by the same producer — transposes the Lang original to Los Angeles, adding a thick layer of political social comment.

The Argentinian film is not an official remake, although it does acknowledge its debt to the early talkie classic. It is instead a complete re-think of the concept in terms of Latin American commercial cinema. The Lang and Losey versions take a stand-offish position, searching for answers to horrible crimes in society as a whole. The killer is the focus of our attention, but equal emphasis is placed on an ensemble of supporting characters. Román Viñoly Barreto approaches the material through complex relationships and romantic conventions. His character-based fiction has an intellectual-political viewpoint, but the emotional connection takes precedence.

This Spanish-language retelling has been described as a ‘feminist’ version, a description that could be applied to many Argentinian and Mexican thrillers. A mother whose child is threatened is the central character. She’s not a pathetic, marginalized hausfrau too overworked to also protect her child, but instead a nightclub entertainer, working in a seedy club so she can afford to send her little girl to boarding school. The setup is entirely different — when it comes time to confront the threat to society, the leading lady takes the forefront. 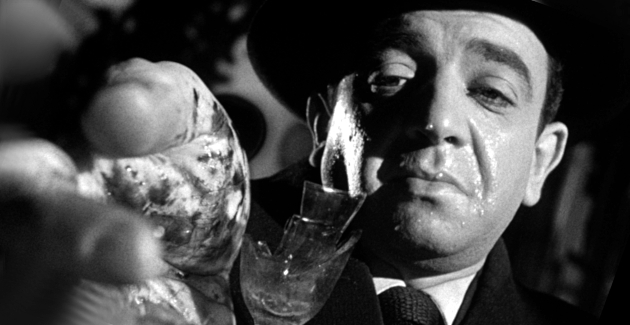 The story is told as a flashback from a courtroom. Should a child killer be treated as an ordinary criminal, or as a sick man?  Testimony recounts events from the recent past. Nightclub singer ‘Rita’ is really Amalia Keitel (star Olga Zubarry). She uses her stage allure only to keep men from taking advantage of her. The club is already suspect as a place where drug deals are made. When Amalia sees a mysterious man disposing of the body of child through a window outside the club’s dressing room, she hesitates to make a report: should her real name be attached to a sordid crime investigation, the authorities might decide she’s an unfit mother.

When the police do become involved, the District Attorney Dr. Bernard (Roberto Escalada) becomes personally interested in Amalia, despite having an invalid wife back home. He presses forward with the case, but when Amalia refuses his advances, he hints that she needs to ‘reform,’ and might be turned into the authorities. What isn’t immediately apparent is that Amalia’s co-worker Cora (Nelly Panizza) knows the killer. The mousy English teacher Teodoro Ulber (Nathan Pinzón) has serious problems with women. His students snicker at his ineptness, and Cora takes his gifts while treating him like a fool. Teodor has channelled his humiliating experiences with women into an abominable criminal life. He tries not to kill, and sometimes harms himself as a distraction from his obsession. But still he hunts for little children in the street.

All three versions of this story are excellent, with Fritz Lang’s acknowledged as the timeless cinema classic and Joseph Losey’s relegated to the low status of a seldom-shown box office failure. There’s nothing derivative about the Buenos Aires- set El vampiro negro. As with the other ‘Argentine noirs’ it has its own distinctive agenda. Just like the ’50s French thrillers now identified as ‘noir,’ Barreto’s film was not subject to the restrictions of our Production Code, and therefore can carry a sub-plot about illicit drugs. The ‘handsome hero’ District Attorney judges Amalia by a rigid societal standard. Yet he seems just as interested in pursuing Amalia as he is the rogue child killer. Woman are the central figures at all stages of the story — and Amalia must ultimately face the killer alone. 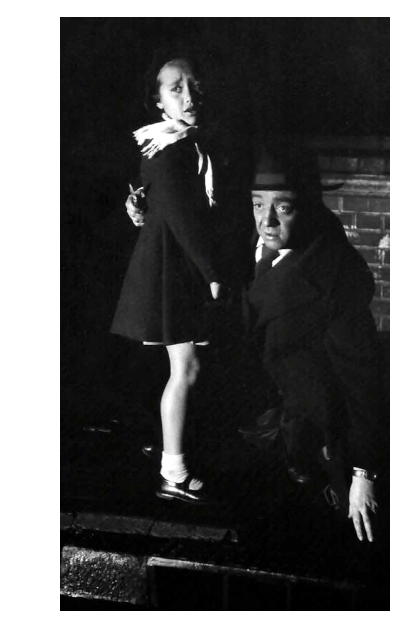 Although El vampiro negro was completely ignored in the United States, it became a popular hit in Spanish-language markets and Europe. Beautifully photographed and directed, Barreto’s thriller retains the lush, romantic chiaroscuro look of classic ’40s noir — by 1953 Hollywood had moved on to the cheaper ‘docu-real’ look, as seen in Fritz Lang’s own The Big Heat. Barreto’s visuals hark back to the roots of noir expressionism, with dynamic compositions and radical lighting schemes for all those nighttime exteriors. The stark ribbons of light evoke Teodoro Ulber’s warped world. His inhuman appetites have made him literally ‘something that crawled out from under rock:’ when threatened, he retreats to the city’s storm drains, like Richard Basehart in He Walked by Night. 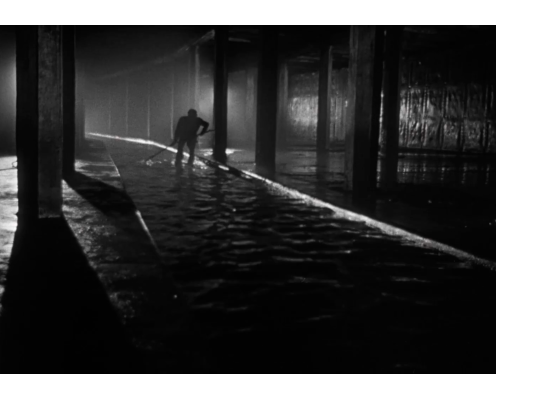 Carol Reed made the underground waterworks in his The Third Man look almost romantic, but Vampiro’s lengthy scene in the giant sewers of Buenos Aires show a strange ‘otherworld zone’ inhabited by society’s rejects. The implication is that the foundations of society sit atop a less stable, morally conflicted underworld. The homeless vagrants that congregate in the storm channels are the ones to track down the killer, taking the place of the criminal underworlds depicted in the Lang and Losey versions.

Nathan Pinzón’s performance delivers a wholly pathetic monster; we’re impressed that the film makes an issue of debating what society should do with him. Knowing that Argentina was in ’53 ruled by a military dictatorship, we’re alo not surprised by the court’s verdict. Yet Barreto’s movie doesn’t put all the responsibility for the crime on the poor mothers. Everyone we see seems at least a little bit compromised by (or invested in) the hypocrisies big and small. Dr. Bernard’s secondary interest in Amalia is transparent, while the pathetic bookworm Teodoro is a target for the scorn and abuse of attractive women like Cora. Amalia’s ‘unclean’ profession entertaining in a ‘second level’ nightclub comes with a big dose of societal disapproval. In this dictatorial patriarchy, a lawman like Dr. Bernard might cancel her rights as a mother without a second thought.

A key scene arrives when Amalia pays a call on Dr. Bernard’s wheelchair-bound wife. Amalia suggests that Sr. Bernard made a pass at her — partly blaming herself, of course. The virtuous wife gracefully changes the subject, without an emotional reaction. Today’s reviewers rush to call El vampiro negro a ‘feminist’ film, and perhaps this detail proves it. It’s a man’s world, and social stability is of paramount importance. Sra. Bernard is a willing subscriber to the unspoken double standard. She’s well aware that Latin gentlemen in certain circumstances are all but expected to stray.

Star Olga Zubarry reportedly found fame in a daring role in an adaptation of a novel by Arthur Schnitzler, and became one of Argentina’s most prominent stars. We’re told that Nathan Pinzón was cast against type, that he was known mostly as a comedian. But he also appears in sober roles in two other Argentine noirs revived by the Film Noir Foundation, La bestia debe morir and Apenas un delincuente. 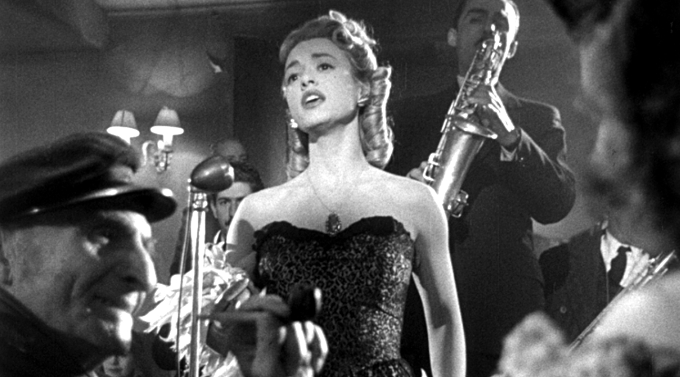 Seeing El vampiro negro on Flicker Alley’s Blu-ray + DVD is almost as exciting as finding it for the first time at one of the Noir City Festivals, four or five years ago. This digital restoration outclasses the 35mm print we saw. The rich B&W image really sells the expressionist lighting schemes — the Argentinian approach gives us a noir vision seen through a slightly different sensiblity. Nobody simply shines a lamp through a Venetian blind and calls it a style — cameraman Anibal González Paz pulls off deep focus shots where we don’t expect them, even in those real underground caverns. The movie isn’t high-toned, but it does have the trimmings of artistic ambition. The movie is bookened by symbolic scenes of the tortured Teodoro climbing a broad expanse of steps, halting and stumbling backwards.

The Film Noir Foundation folk believe in their commitment to these Argentinian restoration projects, and know they’ve brought forth something special with El vampiro negro. Flicker Alley’s extras reflect the importance of the find. Eddie Muller’s fan-friendly introduction stresses the achievement, calling it the FNF’s most significant restoration. He also takes pride in having convinced expert Fernando Martín Peña into recording an entire audio commentary for the disc.

Steven C. Smith and Alan K. Rode’s video presentation The 3 Faces of “M” is one of the best noir-related disc docus I’ve seen. It compares and contrasts the Lang, Losey and Barreto versions in detail, with scenes from all three. Losey’s “M” is known as the ‘subversive’ version, what with cast members chosen for their iffy status with the HUAC and the connections made between the underworld manhunt and the harrassment of left-wingers. Although it has appeared on TCM once or twice, the clips seen here must still be called rare. Eddie Muller reminds us that El vampiro negro was produced when Argentina was ruled by a Fascist military dictator, and elements of the story relate to a society with harsh punishments for those that break the rules — especially women.

The director’s son Daniel Viñoly gives an excellent talk about his father and this show, but also about the Argentinian film industry in general. Argentina was a leading provider of movies for Latin America, Spain, and other Spanish-speaking territories, and it had a high reputation for artistic quality. Viñoly tells us that the boom era of the Buenos Aires studios ended just a few years later.

Flicker Alley’s illustrated insert booklet carries an essay by Imogen Sara Smith, that provides an excellent first-look overview of the show. As an added bonus, all of the extras have English subtitles, not just the feature itself.

Let’s hear it for a whole new era of Latin-American film revivals on video disc — we anxiously await Luis Buñuel’s under-seen Mexican films, and other Mexican classics available only in unacceptable transfers. There must be many more treasures we’ve not been told about, pop genre films as well as noted classics.