Remember Charlie Chaplin’s ‘The Killer with a Heart?’ You too will be frustrated by this well-produced story of a slum kid who commits an unpardonable crime… except that a do-gooder priest wants to pardon him. Dana Andrews and Farley Granger star but the good work is in the smaller roles of this urban tragedy. 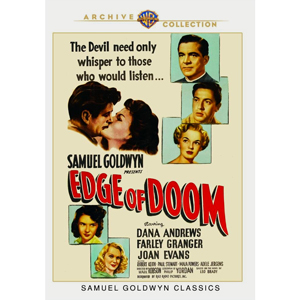 What’s the most hopeless, depressing, feel-bad film noir on the charts? How about Detour, where a pessimistic hero passively takes the rap for a murder he didn’t do? Then there’s Night and the City, the last dialogue of which is the sound of someone being strangled and thrown into the Thames River? Or how about Nora Prentiss, which ends with a man, his face altered by fire, who is so sickened by his weaknesses that he allows himself to be executed for his own murder? 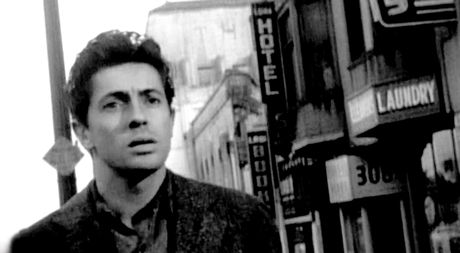 Each of those downbeat pictures has something special that makes it enjoyable, either a sense of humor, thrilling action or clever plotting. My candidate for abject film noir misery is the aptly named Edge of Doom. Unbelievably, this grim ‘n’ grimy tale from the lower depths was produced by none other than Sam Goldwyn. Although he released a few notable social comment movies like the superb The Best Years of Our Lives, Goldwyn’s usual fare were sentimental crowd pleasers like The Bishop’s Wife and Hans Christian Andersen, neither of which belong on a double bill with this gloomy item. Goldwyn’s wife reportedly brought the original Leo Brady novel to the producer’s attention. He must have been busy with other projects when he gave it the go-ahead. Sam Goldwyn wasn’t aiming for Going My Way, but he surely didn’t expect “Going Down The Drain.”

There’s nothing cinematically wrong with Edge of Doom save for the minor point that its story is so bleak, nobody would enjoy seeing it. When it didn’t do well producer Goldwyn reportedly blamed his advertising department, until somebody pointed out the impossibility of selling the movie based on its content. The ads avoided direct mention of the central conflict. Farley Granger hoped that this hard-hitting story would be the one to make him a major star. He instead refused to go on tour to promote it.

The original pre-release cut of Edge of Doom (I’ll get back to this in a bit) sounds like an uncompromising item that blames crime in impoverished urban neighborhoods on societal indifference. It doesn’t let the Catholic Church off the hook, either. Young Martin Lynn (Farley Granger) is a conscientious delivery boy who wants to marry his girl Julie (Mala Powers) and desperately needs money for his ailing mother (Frances Morris). Martin feels that everyone is failing him, especially his boss, florist Mr. Swanson (Houseley Stevenson Sr.) When Mrs. Lynn dies, the distraught (and guilty) Martin gets it into his head that she must have an expensive funeral. He demands an advance, and when Swanson turns him down, he quits. An unpleasant funeral director (Howland Chamberlain) also rejects Martin’s demands. After a misguided pep talk from Mr. Craig (Paul Stewart), the crooked gambler downstairs, the angry Martin rushes to see his parish priest. But Father Thomas Roth (Dana Andrews) is out on a call. Martin instead buttonholes old Father Kirkman (Harold Vermilyea), a priest near retirement, with the demand that the church pay for a big funeral. The old priest becomes angry when his visitor won’t see reason, at which point Martin remembers that Kirkman refused to bury his father, a suicide. Martin goes berserk and kills the old man with the heavy crucifix from his desk. Upon his return Father Roth soon figures out who the guilty party is. He works to get the young man to see the error of his ways, and turn himself in. 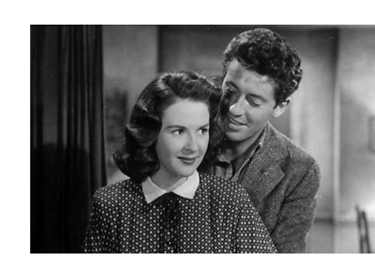 Out of work? Upset over money troubles? Edge of Doom is NOT the film for you. Farley Granger is excellent as Martin Lynn, a kid even more terminally ignorant than Granger’s loser-noir characters in Nicholas Ray’s They Live by Night and Anthony Mann’s Side Street. Life may have let Martin down, but he’s his own worst enemy. We sympathize with his situation, but just enough to want to put him out of his misery. The only good thing about Martin is that he doesn’t pull his girlfriend Julie down with him. It’s Ms. Powers’ first adult role, and she’s heartbreaking. Edge of Doom sticks with Martin Lynn’s steep slide toward the cosmic ash can.

Was screenwriter Philip Yordan purposely trying to outdo the misery and squalor of the then-hot Italian neorealist movies? With its star names and high production values Edge of Doom never feels like one of the political underdog ‘subversive’ films, the kind conceived to point out the flaws in the American system: The Lawless, Underworld Story. It is pretty close to John Berry’s He Ran All the Way, in which John Garfield is in a similar fix, and desperate to escape the law. Understanding why somebody commits a crime isn’t the same as forgiving them. We see John Garfield digging his own grave, and he’s smart enough to realize what a fool he is. At the fade-out of Edge of Doom, dumbbell Martin Lynn is still selfishly fixating on his poor mommy, to the abandonment of all other human values. He’s just not likeable, not even as an example of a deserving underdog. Director Mark Robson’s good work can’t overcome a story that lacks a coherent point.

The part-synopsis above leaves out the fact that Edge of Doom is told entirely as a flashback. Preview response was so negative that Goldwyn hired script doctor Ben Hecht to write a framing story. This unconvincing flashback wraparound tries to spin the story in a positive direction by shifting the focus from Martin Lynn to Father Roth. Roth tells the tale to another young priest who wants to quit, as a morale-boosting ploy. Church work in the slums is both unrewarding and frustrating, says Roth, but he insists that Martin Lynn provided him with hope. He considers the boy a success because he repented. We don’t buy any of it; the attempt to sugarcoat Lynn’s debacle with some feel-good homilies just doesn’t work.

Edge of Doom could only work as a scathing indictment of poverty in the slums; the problems of the conscientious priest only confuse things. Father Kirkman admits that he has failed his parishioners, and the saintly Father Roth spends his time in hopeless pursuits, like trying to get the cops to release a kid caught with a gun. Father Roth intervenes in a fight between a wife beater (Ray Teal) and his masochist spouse (Ellen Corby). For his effort he gets roughed up and then blamed by both of them. The reason Roth isn’t available when Martin needs him — Roth is apparently expected to be omnipresent — is that he’s trying to keep Kirkman’s young relative Rita Conroy (Joan Evans) from running away.

A case could be made for criminal irresponsibility on Father Roth’s part. By protecting a man he knows to be guilty, he’s obstructing a murder investigation. Who’s to say that the loose cannon Martin won’t kill again? 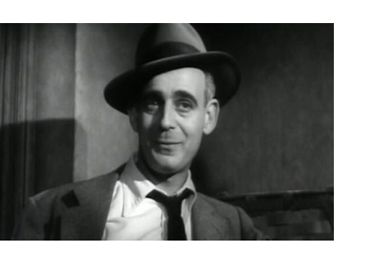 The best part of the movie is another thematic dead end. Paul Stewart is terrific as the slimy Mr. Craig, whose rotten advice further inflames Martin’s sense of injustice. Mr. Craig robs a movie theater at just about the same time Martin bludgeons Kirkman to death. Craig’s common law wife Irene (Adele Jergens) has some good scenes pleading his case. In sort of a Jesus-Barabbas switch, the two men are brought in for each other’s crimes. The criss-cross crimes do not distract us from the fact that Martin has done something that nobody is going to pardon. People in the slums have a raw deal, and it’s criminal that Mrs. Lynn should have to die, ignored by the system. Perhaps the picture ought to be a plea for basic universal heath care? And it does seem wrong that Martin’s parish priest has no funds, when a few streets away another parish is overflowing with wealth. It’s pay as you go for flowers, for funerals and for God. Edge of Doom puts these unpleasant truths out there but doesn’t do much with them. Is it entertaining? It isn’t exactly “a show, that is really a show” (that) “sends you out, with a warm kind of glow.”

Although Goldwyn and Hecht pack the wraparound bookend with uplifting sentiments and add Father Roth’s voiceover throughout, the body of the picture is not changed. When Roth tells his colleague that he sees God in Martin, we don’t buy it. We just see a hothead capable of murder, who at age twenty has suddenly discovered that he lives in an environment of cruelty and injustice. Has Mama raised Martin in a closet? He’s presented as a tragic innocent, but I don’t think it’s cynical to see him as a clueless fool. I believe in the Sunday School mantra of ‘everybody is innocent,’ but also in the more practical rule from The Right Stuff: it is indeed possible to ‘screw the pooch,’ and place yourself beyond the reach of redemption.

All the acting is fine, with Robert Keith especially effective as the main cop, who cares not a whit about moral atonement but likes it when he can catch a priest killer. A better movie might be about his character, a responsible policeman trying to sort out the slum slimeballs from the ineffectual do-gooders.

The Warner Archive Collection DVD-R of Edge of Doom is an excellent encoding of a picture that will interest fans of its stars, as well as noir camp followers that like to check out the also-rans. Harry Stradling’s camerawork is excellent, but we can’t help wondering if this show would be more effective if it were filmed by a docu crew, with a no-star cast, like RKO’s The Tattooed Stranger.

There are no extras. I have a feeling that Goldwyn quietly put Edge of Doom on the shelf in 1951 and tried to forget about it; it only came back intermittently for TV showings, surely booked by programmers that looked no further than the star credits.