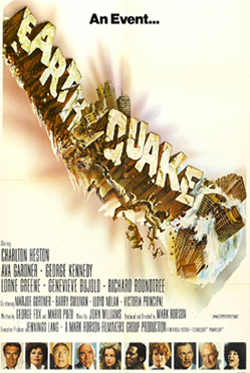 A-listers Mark Robson, Jennings Lang and Mario Puzo (!) steal a leaf (and more) from the Irwin Allen playbook with this turgid smash hit about a devastating LA temblor which painstakingly copies stunt shots from The Poseidon Adventure. If not for the sternum-rattling sound effects of Sensurround, an alarming audio process that duplicates the trembling sensation of theater walls coming down around your ears, this prototypical ’70s disaster epic would be remembered only as an archaic soap opera that would have seemed risible in 1954, let alone ’74. Clifford Stine and Albert Whitlock were among the team of visual effects masters who helped level Los Angeles in such convincing fashion.