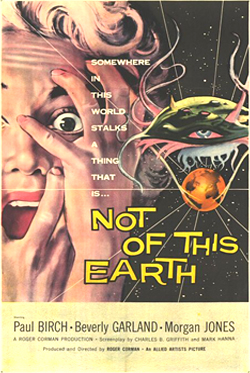 Not of this Earth

Roger must have liked this one, since he’s remade it twice over several decades. Apparently star Paul Birch had a rather physical disagreement with Corman on the front lawn of the Hollywood location and Birch, who had made several pictures with Roger, walked off the picture. His remaining scenes were completed with a double.