Viewers expecting to see a lighthearted  ‘Cisco Kid’ swashbuckler got a surprise with William Wellman’s movie: it’s a tragedy about a genuine historical California bandit who may have been an outlaw terrorist, avenging murderous discrimination against Mexican-Americans in the Gold Rush days. Hangings, rape and massacres — not your average popcorn matinee fare for 1936. 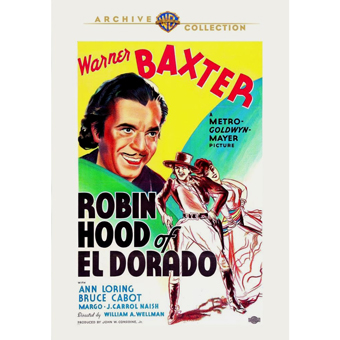 I’m always up to see a new William Wellman movie. Several of his pre-Code pictures have become personal favorites — Other Men’s Women, Safe in Hell, Wild Boys of the Road. Produced at MGM, 1936’s The Robin Hood of El Dorado displays Wellman’s usual polished direction and careful concern for characters, but unlike Warner Bros., MGM had a marked aversion to social problem stories. The production is relatively lavish and the cast is more than adequate, even if Warner Baxter is the only star name. His ‘Robin Hood’ turns out not to be a chivalrous Zorro fantasy, but California’s real-life bandit Joaquin Murrieta, from the years just after California became a U.S. territory. Based on a fairly accurate book, the rather grim story calls for a chameleon actor like Paul Muni to portray Murrieta. 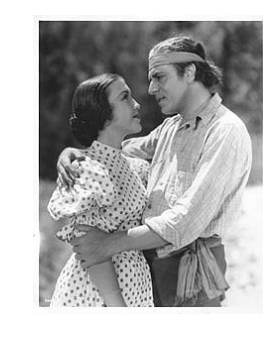 Employed on the hacienda of a Mexican noble, the unsophisticated but popular Joaquin Murrieta (Warner Baxter) marries the beautiful, sweet peasant Rosa (Margo) just as gold is discovered at Sutter’s Mill. When a friend of Murrieta throws a knife at a U.S. Army officer, Joaquin takes the blame. He’s fired, and he and Rosa buy their own farmland. Although there is tension between the indigenous Mexicans and the Anglo adventurers that pour into the gold country, Joaquin makes friends with newcomer Bill Warren (Bruce Cabot). Then a trio of claim-jumpers attacks. Rosa is raped, and dies. Joaquin first takes care to relocate his blind mother; then he carries out a series of revenge killings, which soon put a price on his head. It takes Bill Warren’s advice to convince the naïve Joaquin that he’s now a public enemy. A mob of Mexican-haters savagely whips Joaquin after lynching his brother. Murrieta’s response is to assume leadership of the bandit gang of Three Fingered Jack (J. Carrol Naish). His raiders pillage the countryside, setting up a secret, hole-in-the-wall hideout. Only when he invades a fiesta given by his old employer does Murrieta realize that he’s doing anything wrong. Señorita Juanita de la Cuesta (Ann Loring) tells him that the Anglos are dispossessing the Mexican landholders as well, and that he is robbing his own people. Juanita joins Joaquin’s anti-Yankee raiders.

The historical Joaquin Murrieta is largely an unknown quantity. The Mexican heritage of California was so thoroughly suppressed that reliable accounts are difficult to pin down. Legend makes Murrieta a romantic rebel, but the new Yankee arrivals wrote the official story of California in this time period.  The Robin Hood of El Dorado is essentially about a rebel insurrection against the U.S. government, exacerbated by warfare between ethnic groups. In 1936 prejudiced California judges were still deporting Mexican-Americans on basic principle, and MGM was the most conservative studio in town. This film would seem to have been garbled by rewrites. That the IMDB lists seven additional uncredited writers points in this direction. 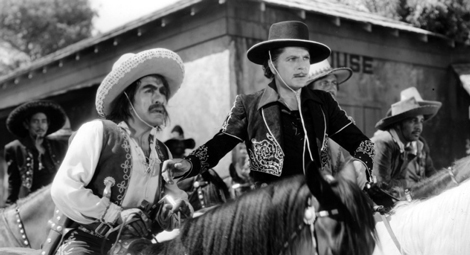 The finished movie gives us a very inconsistent Murrieta, a Rebel Without A Clue. He begins as a happy peon, morally virtuous and apparently unaware of racial injustices. He takes the rap for a ne’er-do-well friend, for no good reason. When his wife is murdered, Joaquin takes the straight vengeance route. Outraged to see a reward poster for himself next to one for Three Fingered Jack, he goes to the sheriff to ask for an explanation. Although it’s established that Joaquin and Jack’s bandits are raiding and murdering throughout the gold country, Joaquin still considers himself a good man. We of course don’t see him committing a single reprehensible act of violence or injustice on-screen. The wonderfully expressive J. Carrol Naish handles that, miming happy throat-cuttings, etc.

The script carefully retains MGM’s reverence for the rich. Joaquin ‘ping-pong’ Murrieta is chastened when he attempts to steal from the hacendados, the landed gentry that remains the only group above the moral fray. In this show, ignorant Mexican peasants start trouble by throwing knives and taking potshots at ‘nice’ Yankees like Bill Warren. Joaquin is a sentimentalized simpleton who talks like a child. It’s essentially the racist way of looking at Mexicans that became the standard after influential films like MGM’s Viva Villa!, which presents one of modern Mexico’s founding fathers as an infantile rapist. 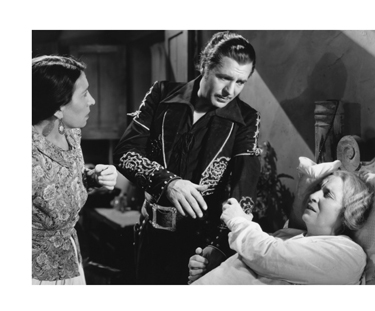 MGM was so consistently anti- union and pro- status quo, that I suspect it’s no coincidence that The Robin Hood of El Dorado rejects any notion that Joaquin is anything other than a misguided fool. For all we know, the historical Murrieta may have been little more than a thief, but this screenplay makes him a political figure. The old ruling class gets our sympathy while we’re assured that there are good Whites moving in too, not just the rough crowd that came for gold.

The Anglos in the early part of the picture are collectively pictured as savage racists. The screenplay eventually contradicts this as well. In the final act the Anglo lynch mob suddenly becomes a law-abiding vigilante army, hunting down the bandits for the common good. As they ride out to do battle we see close-ups of their worried wives and children. Murrieta says he wants to run away back to Mexico. He tells his gang to pull off a robbery for their traveling expenses, but to do no shooting. Frankly, the movie doesn’t afford Joaquin any respect until he yearns to go back to Mexico, which many Californians in 1936 thought was a good idea for all Mexican-Americans.

Warner Baxter keeps Joaquin reasonably sympathetic despite this confused characterization, and a weak Mexican accent.  He had already been a big hit as The Cisco Kid, so perhaps MGM didn’t expect this story to be so grim. The wonderful actress Margo (Lost Horizon, The Leopard Man) exits early, in a Production Code- approved offscreen act of violence. A slowly closing door announces the Fate Worse Than Death — a gang rape? Tea and cookies? Then poor Rosita expires, but because there’s not a mark on her, we’re not exactly sure why. This might steer sick imaginations to consider Fatty Arbuckle scenarios, but wait, there’s no blood either. After The Code came in, sex crimes were of course taboo material. ‘Discreet’ handling of such scenes gave films a new kind of perverse denial fantasy. More often than not, women in American films once again became fragile and helpless, likely to faint at the first sign of a threat. 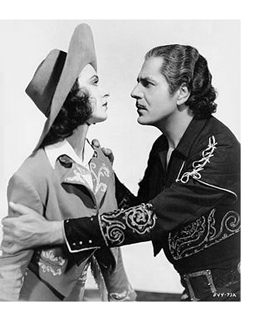 A concluding battle is impressively filmed. The general massacre of Mexicans is justified because one of Joaquin’s raids has caused the death of a White Woman. We’re shown the wedding dress she’s brought from back East. It’s a profoundly racist plot development: anonymous whites and Mexicans can die by the bushel, but killing a virgin from Baltimore is cause to take no prisoners. Joaquin is given a tasteful exit at Rosa’s grave, with a reverent camera tilt up to a mission bell. It’s no wonder that MGM didn’t film the authenticated historical account: it has been established that the posse decapitated Murrieta, displaying both his head and Jack’s three-fingered hand in bottles of whiskey. This also helped someone claim the $6000 reward.

The only web discussion I found for The Robin Hood of El Dorado involves the film’s anachronistic guns. The movie has other amusing lapses of logic. Murietta’s final crime is to rob a stagecoach bringing gold from back East. I rather thought it would be going the other way. Nobody can find Three Fingered Jack’s secret hideaway camp, where dozens of bandits and their wives have established a sizeable robber’s roost. The posse is finally told that the camp is hidden away in… Hidden Valley. Everybody knows where that is! Let’s go, men!

One lively scene at the Hidden Valley camp is a rough & frisky dance, where a ‘lusty, exotic’ dancer and her bandit lover chase each other, cavort and embrace to music. Her costume is rather revealing; it’s as if she gave her low-cut peasant top a good tug just before every take. The dancer may be Carlotta Monti, famed consort of W.C. Fields. 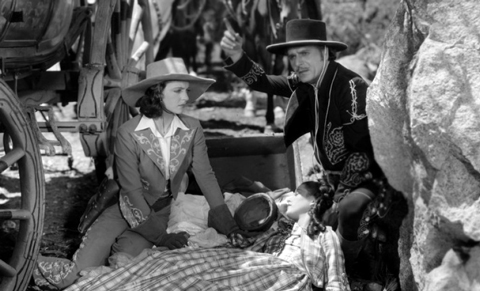 The Warner Archive Collection DVD-R of The Robin Hood of El Dorado is a fine encoding of William Wellman’s fairly obscure historical thriller with good action filmmaking and a conservative political slant. Even the montage sequences are in great shape; by 1936 improved dupe stocks enabled optical printers to layer dissolves on dissolves without everything becoming Grain City. I’m sure I’ve seen the film’s ‘we struck gold’ sequence repurposed for later movies.

Herbert Stothart’s music trots out every standard library cue — poor Bruce Cabot sings “Old Susanna” while riding in a covered wagon. But the poetic Mexican song “La Golondrina” is heard in every death scene, and is sung onscreen to great effect. When Sam Peckinpah needed a sentimental song for The Wild Bunch, he chose this beautiful old ballad about a lost soul far from home. It’s a heartbreaker, even when one doesn’t understand the words.

Although the poster art leaves it out, there is indeed a ‘the’ in the film’s title card. A trailer is included, that announces The Robin Hood of El Dorado as the next great western of the era. If a ’30s movie trailer doesn’t make grandiose claims, it’s not from MGM.