As far as Hollywood was concerned, hardboiled pulp author Raymond Chandler was big news in 1944 and 1945, working with Billy Wilder on the Production Code breakthrough hit Double Indemnity, and getting two of his popular Philip Marlowe books transposed to the screen — and not completely shorn of their racy content. 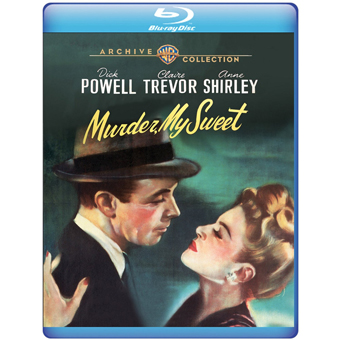 Many films noir seem to come from the same stylistic universe, in terms of themes and visuals. But a few of the earliest classics set forth templates that evoke unmistakable images — the laconic detective, the sultry women in his path, the assortment of eccentrics and grotesques that lurk in a nighttime, urban setting. Edward Dmytryk’s Murder, My Sweet is an ironclad template for the style. It offers not a single extraneous detour into topical concerns or anything beyond the eternal night in which the hero moves. The exact story could happen today, or in 1820, with only superficial changes. Well, if set in 1820, the dialogue might need some revisions.

Audiences at popular film noir revivals now react to Murder, My Sweet as if it were a comedy. Every parody of hardboiled private eyes uses this vision of Raymond Chandler as a model. Philip Marlowe has a smart rejoinder for every question, to express his deadpan amusement at the corruption around him. Exotic women are drawn to Marlowe like a magnet. Almost every contact with the underworld results in the detective being clobbered into unconsciousness. The majority of scenes play out in a shadowy netherworld where normal life seems to have been suspended in favor of conspiracies and sordid crimes.

The exciting Murder, My Sweet is remarkably faithful to its book source Farewell, My Lovely, even if the title had to be altered so as not to sound like a soap opera. This movie is one of the most successful star persona re-inventions in Hollywood history. At this time star Dick Powell was best known as the boy crooner in old Busby Berkeley musicals, a grinning guy with rosy cheeks who ogled undressed showgirls while singing that he’s “Young and Healthy.” Powell recast himself as the timeless gumshoe Philip Marlowe, and continued to play effective tough-guy parts for the balance of his career, as in Robert Parrish’s superb Cry Danger. The able craft talents at the underrated RKO studio give Murder, My Sweet a tough-guy sheen that couldn’t have been bettered by other, more glamorous studios. 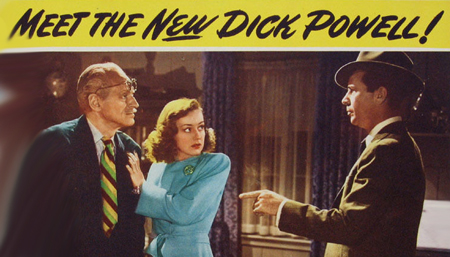 The story is related in flashback by private investigator Philip Marlowe (Dick Powell). His eyes bandaged, he tells it all to the cops. An assignment to help in a money exchange gets Marlowe sapped over the head and accused of murder. He traces a lead back to the Grayle estate via daughter Ann (Anne Shirley); but the real danger in the family appears to be Helen, the elderly Grayle’s beautiful young wife (Claire Trevor). No sooner does Marlowe cross paths with dangerous customer Jules Amthor (Otto Kruger) than he is kidnapped and filled full of drugs by a crooked doctor. Marlowe escapes, only to discover that another of his cases is directly related to this one: locating a missing girlfriend for a huge lug who calls himself Moose Malloy (Mike Mazurki).

We’re in Raymond Chandler country all right, and if you’ve read The Big Sleep or The Little Sister John Paxton’s adapted screenplay is going to seem like Philip Marlowe’s Greatest Hits. All the known suspects are here — clients that disguise their true intentions, a misunderstood good girl, a transparently treacherous femme fatale, her elderly husband, a shady doctor and various bar-crawling lowlifes. Along with them comes a voiceover narration that drips with cynical observations on everybody and everything. Marlowe is always alert, yet acts like he doesn’t care. He can recalibrate his sarcastic attitude for every situation that comes along. Even when repeatedly blind-sided, he behaves as if every unpredictable calamity was business as usual. Remember the comedy ‘Girl Hunt Ballet’ in Vincente Minnelli’s The Band Wagon?  Although supposedly based on Mickey Spillane’s Mike Hammer, its array of characters hews closely to the contours of this Philip Marlowe saga. 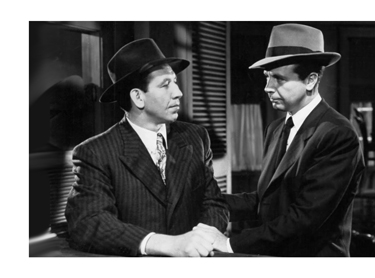 Using many optical effects and matte paintings, nighttime Los Angeles becomes a jungle inhabited by various kinds of predators. Otto Kruger’s Jules Anthor exudes the cultured menace that Chandler favored in villains. Lindsay Marriott (Douglas Walton) is a perfumed lounge lizard, established as straight yet standing in for the author’s bias against gays. Almost for comedy relief, the massive Mike Mazurki hulks through scenes like a combo Lennie Smalls and Baby Huey, demanding that Marlowe find his “Velda.” Claire Trevor’s Helen is a blonde, gaudy black widow, flaunting her sex appeal. She has both a husband and a gangster twisted around her fingers, and still has space left for Marlowe.

Dick Powell’s straight interpretation of Philip Marlowe has become over-familiar from countless imitations and parodies. That’s only because Powell does it so well, that it seems easy. Most of his dialogue and especially his voiceover musings are smart-aleck remarks indicating boredom, disillusion and soured romanticism. Because 1944 audiences remembered Powell as the grinning playboy of 42nd Street and Dames, this Marlowe seems a remnant of more carefree 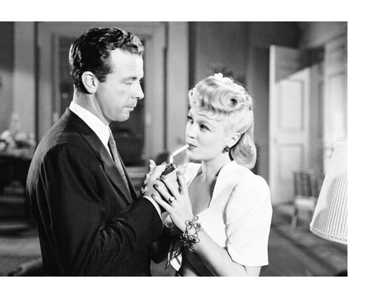 times, a defrocked optimist making his way in a hard world. It’s as if the love of Marlowe’s life was the girl who fell out of the skyscraper in Golddiggers of 1935, and he hasn’t been quite the same guy since. In the excellent scene where Marlowe threatens the quack who doped him up, he looks ready for a nervous breakdown.

Philip Marlowe’s laid-back narration persists even when he is slugged or drugged into unconscious nightmares. As an animated inkblot fills the screen, he calmly recalls that, “A big black hole appeared at my feet. I dived in.” An extension of the abstract, animated psycho-theatrical scenes in The Cat People, these drug dreams are filled with vertiginous falls, distorted hypodermic needles and cobwebs that represents Marlowe’s impaired senses. They’re expressionistic holdovers from the past, and luridly effective.

Edward Dmytryk’s facility with the camera was a big plus in his early RKO years. Subtle devices make us identify with the hero’s relative vulnerability. At one point Marlowe’s eyes are burned by the muzzle flash of a gun fired too close to his face. He therefore starts the movie with a protective blindfold over his eyes. He’s supposed to be the know-it-all detective, but in the movie’s present tense, he figuratively sees nothing. Instead of being helpless he’s like the blindfolded Justice on the courthouse steps, an unbiased observer of humanity who sticks his nose into things only when his code of honor is violated. 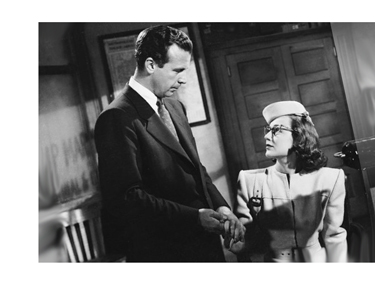 Although there were several antecedents, I believe Double Indemnity started the real wave of self-consciously hardboiled noir films. Murder, My Sweet is the first feature adaptation of a Chandler original. Powell’s Marlowe was soon usurped by Humphrey Bogart, who offers a tougher variation on his Sam Spade in The Maltese Falcon, itself a reinterpretation of Dashiell Hammett’s much different detective hero. Others would follow, more or less using the same character blueprint. Murder, My Sweet remains the purest version of Chandler on film, even if it all seems far too familiar now.

The Warner Archive Collection Blu-ray of Murder, My Sweet is a fine encoding of this core thriller from the 1940s. The previous DVD from eleven years ago was good, but couldn’t overcome shortcomings in the source materials, specifically all those optical and special effects sections where the picture quality took a dive. This new transfer improves on the DVD but is not a picture-perfect restoration. Most scenes are sharp and rich, but in a few places the contrast and granularity is a bit higher. Roy Webb’s film score sounds fine on the clear audio track. 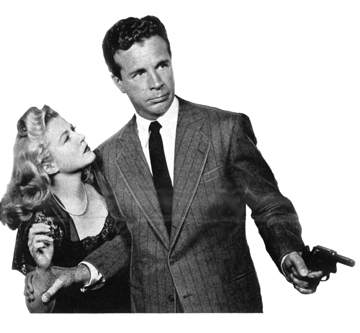 The trailer included is a blurry mess that makes one grateful that the feature looks so good. The other extra, also from 2004, is an audio commentary with noir critic Alain Silver. He relates a wealth of detail about the production, augmented with a keen knowledge of Raymond Chandler.  Silver’s production background shows in his comments about how certain scenes were likely filmed. His perspective on the noir style allows him to point out when the cameraman seems to be overdoing things, as when four successive shots in a row throw exaggerated shadows on the walls of an interrogation room.

Here’s hoping that Warners soon gives us Howard Hawks’ terrific The Big Sleep, preferably a dazzling HD presentation of both the seldom shown wartime cut, and the 1946 official release that enlarged Lauren Bacall’s role and emphasized her romantic sparring with Humphrey Bogart.