We’ve all wished we could change our appearance to attract some desired object of our affections. Demented Malcolm Brand takes the notion seriously. Since his face doesn’t charm lovely Virginia, he’ll make himself a new one — stealing facial features from Virginia’s favorite friends. With a straight razor. 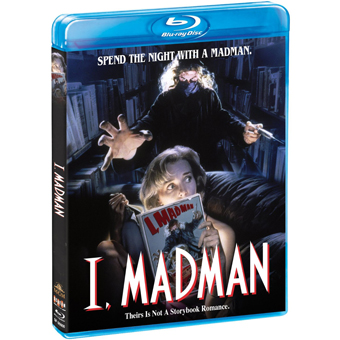 A rich vein of horror seldom tapped in the movies is to be found in vintage pulp magazines, the kind of bone-chilling ‘dread’ stories that make one feel insecure and off-balance. This 1989 release from Trans World Entertainment brings back memories of creepy illustrations in old horror anthologies. The classic example is this: in a dusty corner of a forgotten library, a sleepy old researcher is dozing off over an ancient book. But from out of a picture in the book reaches a skeletal hand. It’s about to turn off the desk lamp… and then what horrible thing will happen? It’s a perfectly irrational nightmare image. Charles Addams and Gahan Wilson are fond of this general theme as well. Actually, some of the promotional artwork for this film uses a similar ‘interactive’ haunted book gag concept. 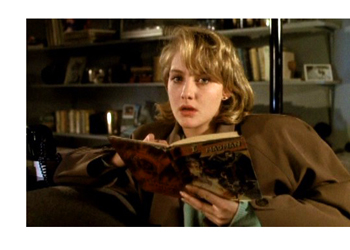 When a horror picture comes along with some spirit and a good idea or two, it’s hard not to find favor. I, Madman is a modest shocker with ambitions. It jumps between waking reality, to the interior logic of a written story. It also shifts back and forth between two time periods, without boring us with the usual question ‘is it fantasy or reality?’   I, Madman may be no classic but it’s directed with verve and for the most part nicely acted. David Chaskin’s story generates a few intriguing surprises.

Scenes set in the present are equally as spooky as those in the past. Curled up on her couch with one of Malcolm Brand’s novels, bookstore clerk Virginia (Jenny Wright) can’t tear herself away from the tales of horror within. The trouble is that every time she reads a new chapter, it’s as if Brand were still alive and re-enacting book’s grisly murders — using Virginia’s friends and acquaintances. Soon, a gravel-voiced man with a horrible face (Randall William Cook) appears in the flesh. He’s Malcolm Brand, the maniac spiritualist who insisted that his books were nonfiction. Brand once again avows his love for Virginia. Just to please her, he’s assembling a new face for himself, using pieces stolen from his victims! 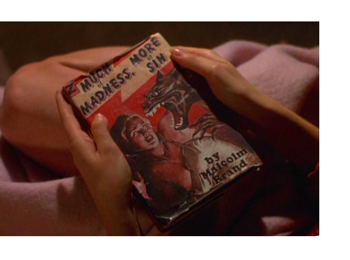 The story twists are just good enough to surprise us, even with the borrowing of ideas from Phantom of the Opera and other Gothic horrors involving men hiding horrible faces behind mysterious masks. The plot utilizes the obligatory cop boyfriend, but even if the actor playing him looks too young to be a seasoned detective, the police procedurals add to the story instead of padding it out. Director Tibor Takács has Virginia tell her entire problem to a sympathetic police captain, who politely pays her no heed whatsoever. It’s like she tried to return a defective kitchen appliance to Best Buy.

Slipping back and forth between 1989 and 1959, the narrative capitalizes on the thrill of a vivid reading experience, the creepy kind in which one feels a book is ‘coming to life.’ In structure I, Madman is very much like the children’s classic The NeverEnding Story. Virginia is so wrapped up in the book’s horrors that they become real; she then must deal with an incursion of fiction into her reality. But it’s no fairy tale. When her friends are killed, Virginia can’t wish them back to life, like Tinker Bell.

This good concept sustains an uneven production with many very successful scenes. Jenny Wright (of Twister) is engagingly intelligent as the curious and haunted Virginia. She catches a brief peek at the mysterious stranger in a mirror. Malcolm Brand’s personal book collection has come into the store as an estate consignment. Brand’s old publisher tells her that the author mutilated himself in a demented attempt to get the attention of a woman he loved. Virginia is stalked by what might be the same man, irrationally survived — or perhaps just a figment of her imagination. She also feels threatened by Brand’s steamer trunk in the bookstore’s attic, which is perforated with breathing holes. Sure enough, it contains a horrifying demon-monster.

I, Madman was made by a skilled independent outfit in the last years before genre chillers were routinely consigned to the purgatory of straight-to-video. Although its resources are modest the picture is handsomely designed. Expressive lighting brings new life to ideas familiar from Alfred Hitchcock movies, and perhaps some Argento films. We like the relaxed opening shot, which pans across a block of old apartments as Art and Dotty Todd’s cover of “Chanson d’Amour” purrs on the soundtrack. Director Takács manages some cute stylistic tricks, like changing from 1989 to 1959 in one shot without a cut. 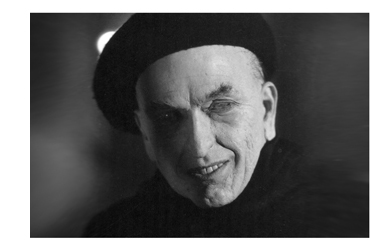 The standout horror makeup and visual effects scenes are all the work of Randall William Cook. Years before his triple Oscar-winning run in New Zealand with the Lord of the Rings movies, Cook directed a lot of visual effects, specializing in stop-motion animation. Cook’s previous special effects movie The Gate showcased sensational pre-CGI illusions, including ambitious forced-perspective setups.

Cook also plays the film’s key villain, Malcolm Brand, a traditional fiend who skulks through the night like ‘The Shadow,’ wearing a cape and broad-brimmed hat. 1989 audiences related Malcolm to Wes Craven’s phantom ‘Freddy’ character, as his appearances frequently defy logic. Malcolm is not just a man in a mask. The makeup work to give Brand a horror-face stitched from pieces razor-slashed from his victims, is no amateur effort. It has a grisly tactile quality, like something from an EC horror comic. Cook’s piercing eyes and maniacal voice add quite a bit. The ever-changing aspect of Brand makes the difference — whenever he gets close to the camera lens, he’s downright creepy. 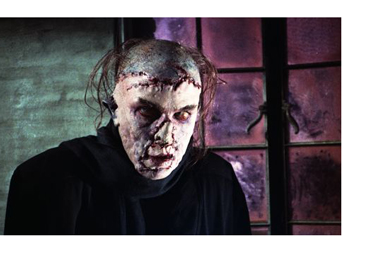 Bursting onto the scene at chosen moments is that grotesque homunculus in the box, a little mongoloid demon. It’s stop-motion animated, also by Randall William Cook. I, Madman may be the only horror feature where a single talent animated a monster in addition to playing a Lon Chaney-type monster role under heavy makeup. A frantic, sharply designed fight scene puts the two ‘monsters’ in the same frame. Cook mixes live action with replacement miniatures and full-sized mockups — it’s very clever.

The effects sequences all rate a solid ‘A,’ and greatly increase the film’s interest level. Unlike the average slasher epic, I, Madman keeps us guessing all the way into its violent third act. The gory killings may be predictable, but not the plot mechanics. Each jeopardy situation is different.

I’m told that the film didn’t do well. But I clearly remember seeing the trailer before another movie at Grauman’s Chinese on Hollywood Boulevard. This is the kind of film that Charles Band tried to make so many times and failed. The ambitious I, Madman is a very pleasing independent horror offering.

Shout! / Scream Factory’s Blu-ray of I, Madman revives this over-achieving ‘small’ horror film in a very attractive presentation. First off, it’s formatted in a theatrical screen ratio. The old MGM DVD was flat open-matte, which nullified the filmmakers’ attempts at stylishness. Colors are nicely saturated, occasionally touching on the Technicolor look the director says he was after. I once saw some makeup stills with Cook’s villain posed in front of an old window frosted with purple light, and assumed they were specially staged. With this improved transfer, I can now see the corresponding setup in the movie. 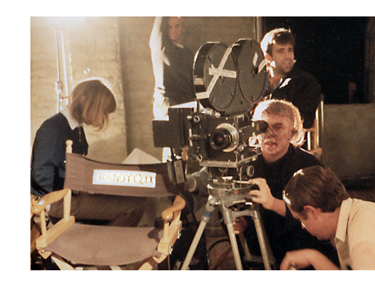 Scream Factory is not stingy when they cover a new horror release. The extras round up director Tibor Takács, screenwriter David Chaskin and actors Clayton Rohner and Stephanie Hodge, plus full input from Randall William Cook. The commentary documents the film’s genesis. Takács and Cook had already worked well together, and the intense effects action scenes were surely plotted out and ‘staged’ by Cook. Their commentary gives us plenty of filming anecdotes and discussions of their intentions. A half-hour making-of docu has the expected repetitions but also points out some clever tricks I’d not noticed, such as the undetectable substitution of a maquette head for Randall’s live makeup, to show parts of Malcolm Brand’s face carved away. Cook winces at every gore effect, and there are a lot of them.

Cook also comes up with ten minutes of fascinating BTS video footage, some of it taped so he could judge if camera takes would allow for the inclusion of his stop-motion monster, the ‘Jackal Boy.’ He narrates both this and a still gallery with dozens of quality images of the horror makeups being applied and finessed. As Malcolm Brand’s mix ‘n’ match facial collage is a work-in-progress, there are a lot of different, startling makeup designs. The ones with the worst matches between ‘borrowed’ facial features are the most disturbing. An original trailer (bearing the an alternate title, Hardcover) and a later promo trailer are included as well.