How does one make a movie about a hot-button political topic that’s divided the nation for sixty years?  And if the facts of the case aren’t fully known, how can one be sure that some news revelation won’t reach back and make your well-meaning  film play like a stack of lies? E. L. Doctorow and Sidney Lumet found a way. 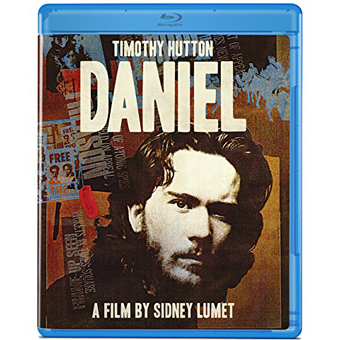 In his book Making Movies, director Sidney Lumet says that he’s not always personally invested in the subject matter of his projects. His Daniel would appear to be close to his family’s tradition of liberal activism. As a child, he performed a major role in the unusual 1939 ‘social problem’ film One Third of a Nation, a melodrama pointing up a crisis of unsafe housing across the nation. Daniel is E.L. Doctorow’s look at the emotional chaos around the notorious Rosenberg case. Doctorow adapted his own book, inventing Paul and Rochelle Isaacson, stand-ins for the most controversial couple of the early Cold War. With all the particulars changed, Doctorow examines not their innocence or guilt of the Rosenbergs, but the terrible effect of unresolved issues on their children, on the leftist movement, and the country as a whole. The film uses extended flashbacks to compare the ‘present day’ of 1967 with earlier times when political intellectuals praised Soviet  communism and promoted the idea of a workers’ revolution in America.. 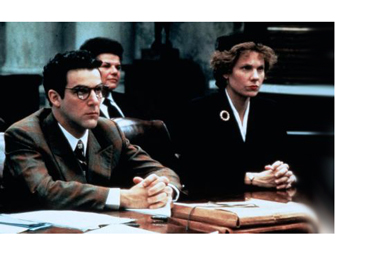 The action shifts between three different stories. In the present, college student Daniel Isaacson (Timothy Hutton, of Ordinary People) has difficulty dealing with his emotionally disturbed younger sister Susan (Amanda Plummer, Pulp Fiction, Courtship). For the last fifteen years they’ve been raised by loving foster parents, Robert and Lise Lewin (John Rubenstein & Maria Tucci). Susan’s anxiety about living in a world that took her parents away reaches dangerous levels. Daniel tries to learn more about the conspiracy case against his father and mother, but nobody wants to talk. He visits the widow of their defense attorney (Carmen Mathews) and confronts the daughter (Tovah Feldshuh) of the defendant that saved himself by informing on the Isaacsons. Both of them resent Daniel’s questions and blame his parents for everything.

In the past, we see young Paul and Rochelle Isaacson (Mandy Patinkin & Lindsay Crouse) enthusiastically embrace leftist activism, for the causes of labor, Spain, and the Soviet Union. Raised in a politically conscious environment, their beloved children Daniel and Susan are devastated when their parents are arrested as presumed espionage traitors. Attorney Jacob Ascher (Edward Asner) must defend his clients against conspiracy accusations that don’t really have to be proven. The F.BI. generates enough negative publicity necessary to insure a conviction on anything. The Isaacson’s leftist friends abandon them. A close relative (Julie Bovasso) finds excuses to turn away Daniel and Susan. The children see their parents only once before they’re executed. 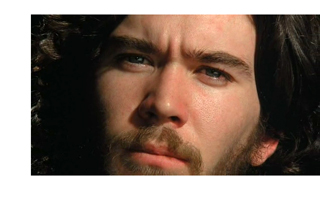 A theatrical mode returns every so often, in which Daniel addresses the camera directly to explain various gruesome historical execution methods, all of which were reserved for peasants or the working poor. This finally leads to the double electrocution scene, which reportedly closely follows the actual execution of the historical Rosenbergs. Interpolated images of 1967-era anti-war parades eventually become part of the film’s last scene. The implication is that Daniel is now motivated to carry on the struggle. Rochelle cries out, ‘Let our deaths be his bar mitzvah.’  Considering the price she paid for her commitment, this sounds more like a curse than a benediction.

First things first: history eventually settled, or almost settled, the question of the Rosenbergs’ guilt. In 1995 Soviet documents revealed that Julius Rosenberg was not innocent, that he played some part in the effort to ferret secret atom information to the Russians. But the consensus is that Ethel Rosenberg was innocent, that the man that accused Julius to save his own neck, falsely named Ethel as a co-conspirator to cover for the real guilty party, his wife. Everything about the case stank to high heaven, legally speaking. At the time, the only evidence against either Rosenberg was the confessed traitor’s testimony. The Feds allegedly were ignorant of Ethel’s exact role, and falsely indicted her with the idea of forcing Julius to break down and tell all, to save her. The Rosenbergs decided to become martyrs together, rather than to make a deal to implicate more people. By killing them, the U.S. buried any hope of getting at a truth that flattered nobody. The whole nation was caught up in the illusion that traitors had given away America’s secret super weapon. In reality, there was no secret. The U.S. was never going to be able to stop other countries from doing what we had done. The Rosenbergs may have thought their resistance was a personal victory, but they instead were used to fuel the fires of Cold War hysteria. 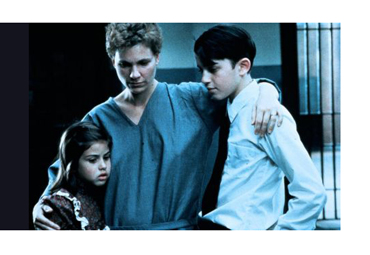 Daniel doesn’t address the issue of guilt or innocence. Many viewers will see this as a dishonest evasion. We never see the Isaacsons doing anything suspicious, but when they’re being harassed, we know they have plenty to hide. If the movie ultimately didn’t please audiences, it’s because we expect some basic questions to be answered. Doubt and ambiguity are never welcome in a movie like this. Is the imprisoned Paul going batty because he just can’t handle the strain, or because he’s guilty? The way Rochelle behaves, she could very well be a determined, morally certain enemy of America. We spend 130 minutes sharing the injustice and misery of the children left in the wake of this awful mess.

Doctorow and Lumet were clearly excited to recreate ‘favorite’ liberal moments from the past. Speeches, concerts and demonstrations are staged on a big scale. To keep things straight, the vintage material is given an ‘old’ visual treatment, lower in contrast and color timed very warm. It’s like a faded magazine illustration, imperfect but glowing with nostalgia. We see ‘idealistic’ socialist speakers praise the supposed new utopia in Stalin’s Soviet Union. The liberal movement is openly characterized as consisting primarily of New York Jews. During a ‘save the Issacsons’ rally, Lumet was keen to show the Issacson children literally held aloft and carried to a stage by a crowd of fervent supporters. New Yorkers bused in to hear Paul Robeson sing are set upon by a gangs of thugs with axe handles, with the approval and cooperation of the police. Photographers mob Ed Asner’s old attorney as he walks the kids to see their parents one last time. These vintage scenes vividly express the clammy fears of the dark era. They’re needed to set up the ugly, unresolved present of 1967, with the children of the notorious traitors wracked with pain and/or living in denial, grasping at security and blaming the victims.

Lindsay Crouse (All the President’s Men, Prince of the City, Places in the Heart) is consistently excellent, suggesting at all times that she has much to hide, but for high moral reasons. Mandy Patinkin always seems to be acting. Perhaps Paul is meant to be one of those ‘too much’ guys, but whether he’s spouting Marxist theory, promoting family sentiment with the kids, or acting self-righteous, it all seems forced to this reviewer. I will admit that Paul Isaacson seems sufficiently foolish to become the fall guy for a reckless act of disloyalty. The young actor playing Daniel as a child seems as wary of his hyper- dad’s zeal, as he is upset at what’s happening to his family.

Edward Asner is restrained and dignified as the lawyer Jacob Ascher. Lumet excels at toning down actors that habitually give too much, and Ascher is a beautiful portrait of a good man who dedicates his life to an impossible defense. As Daniel, Timothy Hutton sports a Che Guevara look only to turn out to be a student sick of activism and marches, activities that he thinks do nothing but make good idealists into targets for hate and political opportunism. 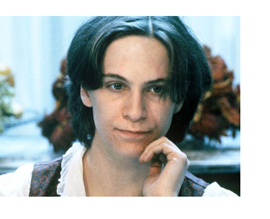 The best performance by far is Amanda Plummer’s adult Susan. A bundle of nerves, she desperately seeks an activity or cause that will burst the evil bubble and lift the curse from her lost, idealized parents. That Daniel can’t be more understanding with Susan is another tragedy. Daniel expresses his own personal misalignment in unnecessary confrontations and hostility. For instance, the unlikeable Linda MIndish (Tovah Feldshuh) is clearly equally traumatized, and has found her release valve by choosing to believe that her traitor father was an innocent fall guy, and by placing the blame on the Isaacson family. She’s a tough case, but a less accusatory approach might have been more successful.

Daniel is a good movie, but it raises anxieties of its own. The movie is about the Rosenbergs, yet for reasons not explained it invents an entire substitute story and characters. Viewers not disposed in favor of the Rosenbergs will hate it, as Julius appears to have been guilty and is wholly responsible for the calamity suffered by his family. Informed liberal audiences that still believe that a grave injustice was done, may think that focusing on the harm perpetrated on the children avoids the big issues. On the other hand, do we really think movies ever sort out the truth and fully ‘cure’ historical quagmires? More often than not the opposite happens.

The movie is certainly beautifully directed. Sidney Lumet had more success editorializing on liberal-radical history with his later Running On Empty. It also looks at how the politics of the parents affects the lives of their children. The drama’s fictitious married couple is based on two real ex-Weathermen radical bombers, but the story is sufficiently generic to stand on its own. 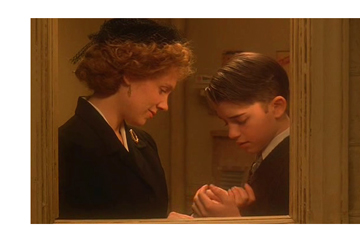 Olive Films’ Blu-ray of Daniel comes from a very good encoding of this expensive-looking Paramount production. The precise color timing helps to keep discrete the film’s two time frames. The audio is excellent. There’s no music score per se, but we hear several Paul Robeson songs, including the accusatory dirge, “There’s a Man Going Round Taking Names”. Robeson’s powerful voice shakes the walls.

Olive provides no extras for this long, emotionally draining film. Its story about the ugly legacy of the HUAC-McCarthy years may inspire viewers to read more about both sides of the issue.