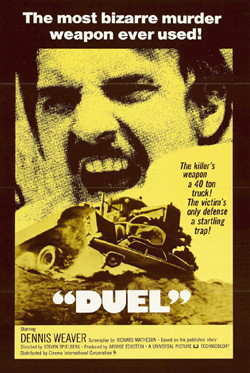 In 1963 writer Richard Matheson had a terrifying freeway run-in with a murderous trucker who tried to run his car off the road. In 1971 he turned the experience into a story published in Playboy. Some hold to the view that even so accomplished and award-winning a filmmaker as Steven Spielberg has never topped the impact made by his made-for-tv feature version starring Dennis Weaver. The 74 minute cut that premiered on the ABC network was lengthened to 88 minutes via outtakes for overseas release. It’s this version that circulates today, the original having been (unfortunately) long since retired.