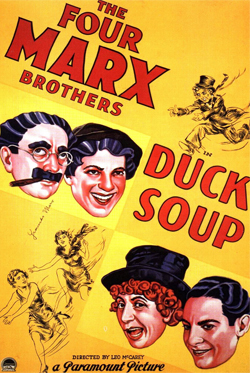 Duck Soup, arguably the Marx Brothers’ best film, is also one of the greatest anti-war movies ever made. Director Leo McCarey gave the picture a disciplined structure that still allowed his anarchistic stars plenty of room to wreak havoc, resulting in an absurdist comedy with an undercurrent of no-nonsense political commentary. This 1933 classic could be seen as the spiritual father of the darkly comic anti-war films that emerged in the sixties including Dr. Strangelove and How I Won the War.